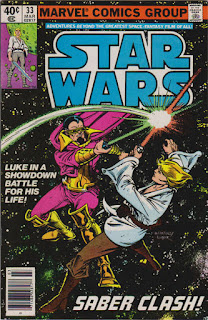 Plot
As the Millennium Falcon races away from Tatooine, it spots a Tagge mining ship taking on passengers, whom Luke assumes is the Baron. Hiding in a nearby asteroid belt, Han is able to bring the ship close enough to the mining vessel for Artoo to use the Falcon's augmented sensors to learn the destination: Junction, which the Rebels have been using as a source of supplies. Later, the Falcon emerges from hyperspace to discover the mining ship rendezvousing with an Imperial Star Destroyer. Spotting the crew transferring cargo to the Star Destroyer manually, Luke dons a spacesuit and gets close enough to tap into their communications, learning that Tagge plans to use the Omega Frost on Junction. Luke races back to the Falcon to warn the Rebels, but is captured by Stormtroopers, though he is able to warn Han about Tagge's plans. 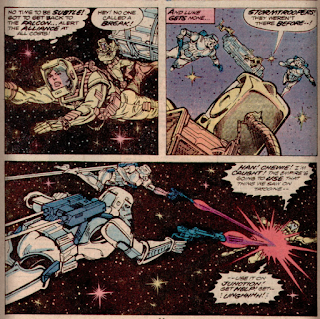 Han rushes back to Yavin Four, to inform Leia and the Rebels abut Tagge's plan, while aboard Tagge's ship, a captive Luke learns that Tagge actually intends to use Omega Frost on the asteroid corridor the Rebels will invariably use to reach Junction, destroying their fleet once and for all. He then allows Luke to escape, eager to duel him with lightsabers. The pair meet in the hangar bay, where Luke's connection to the Force overcomes his technical shortcomings, allowing him to defeat Tagge by damaging his cybernetic eyes. He escapes in a TIE fighter, but Tagge's brother Silas informs the Imperials that he took precautions: the ship Luke is in has no weapons, no communications, and barely any fuel.

Firsts and Other Notables
Luke duels with Baron Tagge this issue, the first time we've seen Luke use his lightsaber against another lightsaber. Tagge notes that finding opponents for such duels is difficult, something that's remained mostly consistently about the Original Trilogy era. 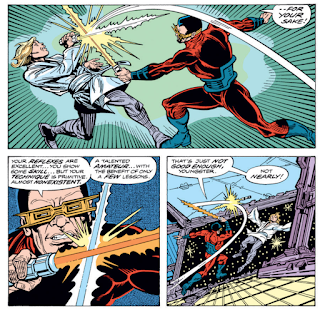 This issue makes the first reference to a Tagge sister, who will show up before too long, though the Baron wants her left out of things.

The Statement of Ownership in this issue lists the average number of copies sold during the preceding twelve months as 279,374, with the issues nearest to the filing date selling 281,235 copies.

A Work in Progress
Han notes that Luke's skills with a lightsaber have improved.

Junction, the planet being targeted by Tagge, was the setting of Luke's encounter with Valance in issue #27.

Luke's lack of technical expertise with the lightsaber seems to be made up for by his connection to the Force. 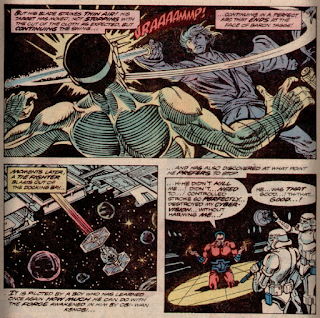 Um, Actually
Tagge notes that he's memorized Luke's face from Imperial records; knowing the Empire has records like that, including on people from Outer Rim planets like Tatooine, makes it harder to buy that Vader wouldn't have stumbled across someone named Skywalker, or that Obi-Wan thought it was fine for Luke to keep his last name. 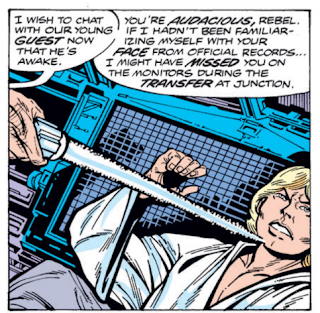 The Space-Lexicon
Tagge says that Luke as the "Touch of the Wizard"; it's unclear if Tagge is unaware of the Force, or is just using a more colorful description of Luke's connection to it. 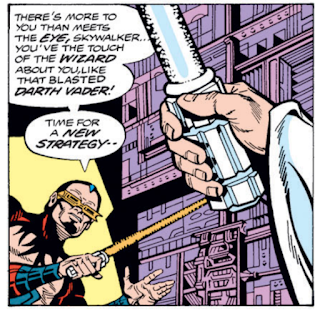 Remember Star Wars?
Chewbacca is once again playing Dejarik (the holographic chess game) with Artoo, while Luke is training using the helmet and training remote from A New Hope.

It's in the Mail
A letter in this issue's letter column complains about the characters never changing clothes and Luke being stuck in his farmboy garb still (preach it!). Also, the writer asks to the confrontation between Luke's father and Darth Vader (heh) in flashback, prompting an explanation on the limitations imposed on licensed comics, and how they can't really do stuff like that while George Lucas is still telling new Star Wars stories (interestingly, it also sounds like Marvel was specifically forbidden from having a direct confrontation between the heroes and Darth Vader prior to Empire).

(Also, the upcoming adaptation of Empire Strikes Back is said to being in issue #38; instead it won't start until #39, due to complications involving a line-wide format change at Marvel around that time).

Austin's Analysis
Whether it was Goodwin's intention and/or he was asked to do it by LucasFilm, this issue does some important setup work for the upcoming Empire Strikes Back: it establishes that Luke has been training in the use of his lightsaber, then puts him into a situation where he gets to duel someone else using the weapon, in the process establishing that Luke's connection to the Force can go a long way towards making up what he lacks in technical fighting skill. All of this is important (at least to the pedantic among us) to explain how Luke could go from a brief lesson with Obi-Wan aboard the Falcon to holding his own (for awhile) against Darth Vader in Empire. The assumption was always that he did some additional training on his own, and this issue confirms that (for this era of Star Wars publishing, at least), while at the same time, not diluting the power or menace of Vader in the film by introducing a bunch of encounters between him and Luke prior to Empire. Much like the resolution to Han's debt to Jabba in issue #30, this is exactly the sort of thing a licensed series like this should do, explore ideas left unexplored by the original movie, while helping bridge the gap to the next one, in as entertaining a manner as possible.

Next Issue
Luke tries to save the Rebels from Baron Tagge's machinations.