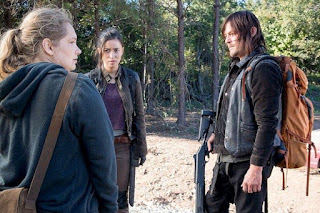 You know what I love seeing? People being mopey assholes. You know, people whining and complaining, being asses to each other for no good reason. It's really compelling television!

Guess what we get in the episode of The Walking Dead, Twice as Far? People being mopey assholes! At least some of them redeem themselves by the end but, boy, is it tough to watch while it's happening.

First we have Eugene and Abraham. Abraham notices Eugene newfound confidence. Eugene brings Abraham to a factory where he believes they can manufacture bullets. Abraham likes the idea. So far so good! (Although, bullet shortages is nothing this show has explored before or something the characters have talked about in any earnest but...whatever...)

But then things go downhill. A zombie shows up with melted metal covering its body acting as armor. Eugene really wants to take care of this zombie but seems incapable of realizing the challenges the metal poses. Since Eugene can't stab the zombie in the usual way but still tries to, Eugene finds himself in a bad situation. Abraham, of course, rescues Eugene. I suppose, things are still fine.

Well, things would be fine if Eugene didn't throw a hissy fit. Apparently Eugene felt a little emasculated and his feelings got hurt. So he yells at Abraham and kicks him out. Eugene, for someone who is supposed to be smart, you sure can be an idiot. There's nothing wrong with learning how to handle yourself but stay in your lane and know your roll. Abraham is a trained soldier with biceps the size of your head. He'll always be better at fighting than you. It's OK, you have your own uses. Alexandria needs you just as much as they need Abraham. Calm down.

That brings us to Rosita and Daryl. They're escorting Denise on a medical supply run. Unfortunately they're very grumpy about it. They don't want Denise with them and are very vocal about it. I'm not sure what their issue is. Denise, as well as a lot of people, need to learn to survive outside the walls. You never know when the shit will hit fan...like, a few weeks before? Daryl and Rosita are going to have to bring rookies out eventually and this seems as good of a time as any. But, regardless, Daryl is mopey, Rosita is mopey and they're being asses to each other and being asses to Denise for seemingly no good reason.

This all culminates in Denise yelling a lot of truths at Daryl and Rosita. Basically, she says the world is a very dangerous place and there are no real places to hide. Everyone is risking their lives all the time. So people need take risks, to grow and to learn. Taking the inexperienced out may or may not work out every time but it's the only way for people to move forward in the zombie apocalypse. Unfortunately for Denise, today it does not work out for her.

This is The Walking Dead so no good deed goes unpunished. Denise gets arrowed through the eye. The culprit who shot the arrow? Dwight, the man Daryl helped escape from the Saviors only to have his motorcycle and crossbow stolen. Yup, that's right, Denise was shot with Daryl's crossbow.

Dwight has Eugene as a hostage so Daryl and Rosita can't retaliate. Abraham is hiding in the bushes but Eugene outs him. I was just about to get livid at Eugene for that but it was really a ploy by Eugene to distract Dwight so Eugene could get close enough to bite his dick. I'm dead serious about that.

With all the dick-biting going on, things get crazy, Abraham, Daryl and Rosita manage to turn the tide again Dwight and his crew. A lot of Dwight's men die but Dwight doesn't thanks to the magic of the main character force field. With the enemy retreating, Rosita, Daryl, Abraham and Eugene make their way back to Alexandria minus one doctor.

Other Thoughts:
Regardless of what you think about Morgan's pacifism, building a jail cell isn't a bad thing.

I'm not a fan of mopey Daryl.

If I was scavenging, I'd grab everything that wasn't nailed down provided I could carry it.

So we get a bit of morbid environmental story telling. I believe somebody killed a infant to keep it quiet so as not to attract zombies. It's just odd that they'd write "hush" on the wall. I don't think the baby could read. I suppose they could have been crazy but...I'm skeptical.

So Denise says she sees a cooler in a car. Daryl and Rosita say to forget about it and then proceed to never look back at Denise until she's all the way to car.

But I'm with Denise, checking out the cooler is worth the risk. It was just a zombie in a car. Daryl or Rosita could've easily taken care of it.

Denise was inexperienced but I don't think that had to do with her demise. It's a shame. I liked her!

So, whose the doctor of Alexandria now?

So, Dwight had fled the Saviors, right? Did he start his own gang? When did he turn into a badass? What happened to his lady friend? Was he conning Daryl the whole time? So many questions...

It looks like Carol left Alexandria because she's sick of killing? Morgan should have gone with her then! Instead, Daryl goes after her, maybe?
Newer Post Older Post Home
Posted by Dr. Bitz at 1:25 AM