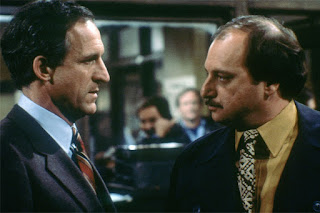 “Trial by Fury” is David Milch’s first television script, written while he was still a Yale literature professor.  It’s also the third season premiere of Hill Street Blues, and regarded by some fans as the best episode of the series.  The plot involves the rape and murder of a nun and Captain Frank Furillo’s morally dubious attempt to close the case -- he conspires with the judge to have the two suspects released, knowing that a mob is forming outside the courthouse.  Exploiting their fear of the mob, Furillo convinces the two young drug addicts to confess to the murder.  His girlfriend, public defender Joyce Davenport, is horrified by Furillo’s actions and demands that they spend the night apart.  Furillo, burdened with grief, visits his priest for confession.

Like all episodes of Hill Street, the main story is intercut with numerous subplots.  Some are more lighthearted than others (one merely involves Lt. Ray Calletano, who always seems to be played for laughs, anguishing over a tax audit.)  Another plot introduces Eddie Gregg, a male prostitute who’ll become a recurring character this season.  Reading this summary today, the episode might come across as someone trying too hard to press buttons or manipulate the audience, but in 1983, television just didn’t do stories like this.

What’s amusing, watching it in context of other Milch shows, is just how dramatic the whole thing is.  Capt. Furillo’s actions might’ve seemed dubious to a 1983 network TV audience, but on NYPD Blue, not one character would even bat an eye.  The detectives of the 15th precinct will employ far more questionable tactics during their years closing cases, actions that would make the sanctimonious Joyce Davenport practically collapse onto her fainting couch.  (There’s an interaction between Davenport and the judge this episode that gives you a hint that law school dropout Milch truly loves writing lawyers, making me wonder why the courtroom scenes disappeared from NYPD Blue so quickly.)  There’s no way the worldview of NYPD Blue would even allow Capt. Furillo’s decision to be seen as anything other than heroic, or at least admirable in some way -- in fact, it would likely be portrayed as a shrewd act of police work.  Essentially, Furillo scared a suspect he knew was guilty into confessing, which is probably how forty percent of the cases on NYPD Blue are solved.

While the pure, self-righteous Capt. Furillo might come across as a drama queen, other moments on the show are so nondramatic it’s shocking.  One episode this season has a lieutenant from another precinct appear at the Hill Street station, adamant about seeing the suspect who assaulted his daughter.  The desk sergeant checks him for a gun, then takes him to the holding cell. The lieutenant, alone with the suspect, then pulls a pistol out of an ankle holster and shoots him, only to soon discover that he killed the wrong man -- a paranoid survivalist who’d been brought in earlier that day.  The very next scene has the officers of the precinct having a beer and laughing about the unlucky guy who turned out to have a reason to be paranoid.  On NYPD Blue, this would’ve been the most dramatic moment in TV history.  The music would’ve filled the background, the camera would’ve abruptly swung from the lieutenant’s gun to his face, there would probably be some slow motion effect, and the incident would rightly serve as the climax to the episode.  On Hill Street, it’s just one more thing that happened that episode.  It’s not scored, nor is it shot dramatically, and the fact that the lieutenant has destroyed his entire life, and killed an innocent man, is just fodder for a joke.

Milch contributed a few more scripts during Season Three of Hill Street, most notably co-writing the teleplays for the Sal Benedetto storyline.  Numerous writers are credited for teleplays on most episodes, and I’m going to assume that each writer was assigned a specific plot because that would seem to be the most logical way of divvying up the scripts.  During a talk at MIT in 2006, Milch stated that he created Benedetto as a more "realistic" portrayal of cops; or at least, of the ones he'd accounted during his years as an addict.  He also revealed that Benedetto had to be killed off because "they" were uncomfortable with such an unflattering portrait of a cop.

Detective Sal Benedetto, portrayed by Dennis Franz, is a detective from another precinct who has a run-in with cornball beat cop Andy Renko, who’s been assigned traffic duty.  How Renko received this duty is perhaps another testimony to how things have changed since this series aired -- Renko was at a stag party, drank too much, and was caught exposing himself in public.  He’s embarrassed, playfully, in front of the other cops during Roll Call by the sergeant, and then assigned traffic duty.  (I have a feeling that at any time after 1990 or so, this would’ve been played far more seriously.)  Renko writes the surly Detective Sal Benedetto a ticket, and is later assaulted by Benedetto outside a bar that evening.  The next episode, Renko’s partner Bobby Hill (not, not that Bobby Hill) confronts Benedetto and beats him up in the same alley.

Det. Sal Benedetto’s story seems to be over, but he reappears towards the end of the season, having now been assigned a special case in the Hill Street precinct.  It involves a bookie, his hired thug (named Sonny Crockett, presumably by Miami Vice’s future creator Anthony Yerkovich), and the larger player interested in buying the bookie’s “paper.”  Benedetto is initially disliked by the Hill Street cops, but does put some effort into earning their trust.  Franz’s portrayal of Benedetto has faint echoes of the Sipowicz character he’ll develop later, but for the most part, Benedetto exists as his own entity.  He’s cockier than Sipowicz, but also more friendly, even though his affability comes across as phony in most scenes.

Benedetto, we learn as the story progresses, is even slimier than he initially appeared during his original apperances.  The Benedetto arc becomes intertwined with a few other ongoing subplots, leading to a dramatic showdown to mark the season’s finale.  (“Dramatic” by Hill Street standards, still pretty pedestrian when compared to NYPD Blue’s typical tone.  It seems most of the melodrama of this show is reserved for Capt. Furillo’s crises of conscious.)

The final showdown with Benedetto marks a definitive conclusion for the character, although Franz made such an impression on the producers, he was brought back in a different role a few years later during Milch’s term as showrunner.  I’ll get to those episodes in a future date. 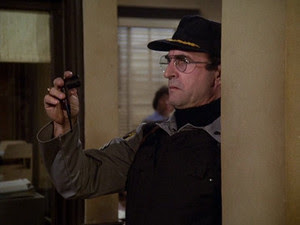 This closes out the initial look at Hill Street.  Next time, I delve into Season Three of NYPD Blue, which is potentially the best season of the series.
Newer Post Older Post Home
Posted by G. Kendall at 6:00 PM