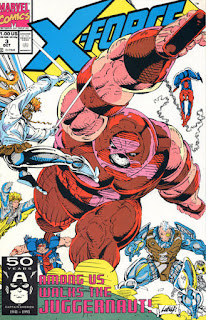 In a Nutshell
Siryn joins the team as they attack Black Tom & Juggernaut.

Plot
Siryn arrives at the World Trade Center, attempting to stop her uncle and Juggernaut, but Juggernaut punches her off the roof. She meets up with X-Force, arriving on the scene, and joins them to take down the villains together. As Warpath knocks Juggernaut off the roof to the ground below, the rest of the team takes out Black Tom's soldiers, while inside, Gideon and Sunspot make their move, attacking Black Tom. He overpowers them, but Cable intervenes, wounding Tom before he can kill Sunspot. However, Tom reveals that he's placed explosives on the upper floors of the building. Just as Spider-Man arrives, Tom presses the detonator, and the top of the tower explodes.

Firsts and Other Notables
Siryn, fresh off her appearance in "The Muir Island Saga", pops up in this issue, hoping to stop her uncle Black Tom and Juggernaut, a shrewd use of continuity (presumably Nicieza's doing) given their shared past together. She also more or less joins X-Force as of this issue (Cable offers their assistance against Tom and Juggernaut here, but she sticks around with the team even after this story), thus rounding out what is generally considered the team's "classic" roster (or at least the roster in place when I first started reading the book), with Siryn becoming one of the mainstay members of the group during its initial iteration. Her involvement in the book is another shrewd move (again, I credit Nicieza, since it seems like Liefeld doesn't care much about past events), as she didn't get taken by Peter David for X-Factor (or Nicieza called her first), and has never really had a recurring role anywhere despite her connection to one of the X-Men's most-storied members. 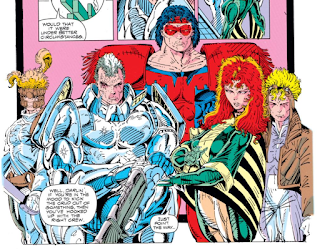 As a kid, I always thought it was weird that Siryn didn't join X-Force until issue #3 of their series, instead of immediately after "Muir Island Saga" concluded, not realizing that X-Force #1 was released before that story ended, so she does in effect join immediately after her minor role in X-Men comes to an end.

This issue kicks off a little mini crossover between X-Force and Spider-Man (Todd McFarlane's Spider-Man book whose first issue was the previous record holder for best-selling comic book of all time), that goes from this issue to Spider-Man #16 then back to X-Force #4 for the conclusion. To that end, Spider-Man pops up at the very end of this issue, setting up his chapter of the crossover. 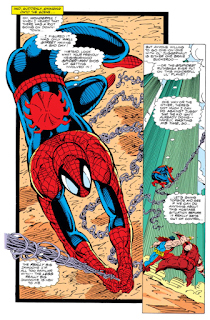 A Work in Progress
Siryn notes that the police are keeping away from the World Trade Center at her request.

Boom-Boom doesn't appear in this issue, ordered by Cable to (off-panel) take over Domino's usual role and fly their ship. It's a weird thing that reads like something you'd see on a TV show where a given actor wasn't available for filming a particular episode. I guess Liefeld just didn't feel like drawing Boom-Boom this issue, and Nicieza scripted in some dialogue to explain it.

Shatterstar is able to count now. 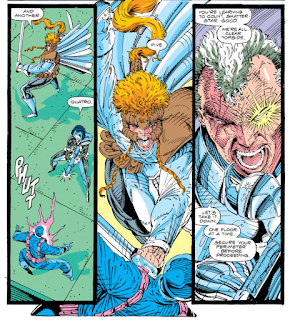 The Cable Guy
Cable wears a new set of silver armor for this story; it's not one of his better looks, mainly because it's so monochromatic.

The Grim 'n' Gritty 90s
Though it was of course a standard action trope at the time (most likely mimicking Die Hard, in fact), and there's no way the creators could have possibly anticipated events to come, there's also no denying that this story, featuring a a terrorist exploding part of the World Trade Center, takes on an entirely different and unintentional resonance now, post-9/11, and it's definitely not something we'd see presented this casually (as a plot point in a relatively minor, inconsequential story) nowadays. 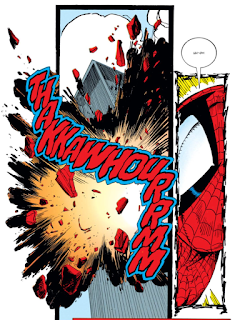 501 Genes
Siryn's hair is enormous throughout the issue. 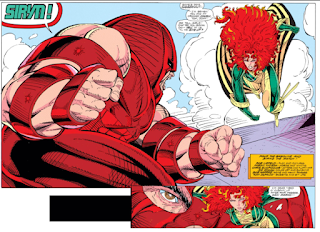 Juggernaut apparently teleports from the board room to the roof of the World Trade Center between pages at one point, appearing in one place than suddenly the other without explanation (or much indication of a passage of time,or motivation for the character to suddenly return to the roof).

To the EXTREME!
This issue begins on the third day of the World Trade Center hostage situation and, like, way to be proactive there, X-Force.

Cable even specifically says X-Force is there to do what the Avengers are unwilling to do. I guess neither is willing to address hostage situations sooner rather than later? 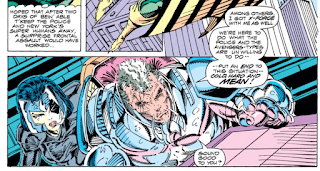 Given the greater-than-usual media coverage of their exploits, Cable orders the team to not kill anyone, which is a perfectly viable reason for not doing so, except they haven't really done that at all that we've seen, so it seems a moot point. 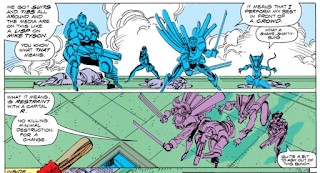 Austin's Analysis
This issue could easily be read as X-Force's coming out party: they get a new member in Siryn, they face off against a classic X-Men villain (and one who's had some pretty memorable encounters with the Marvel Universe at large) in Juggernaut, and get to team-up with Spider-Man (and Liefeld's buddy Todd McFarlane) in the process. Yet for all of Cable's tough talk in this issue about how X-Force does the job in a way those sissy Avengers won't, the team is still being distinctly reactive. Black Tom and Juggernaut have been holding these extremely high profiles hostages, amidst significant media coverage (as we see this issue) for THREE days before X-Force bothers to show up. And it's not like they've been busy - last issue cut back and forth between the hostage crisis and X-Force playing training in the woods around their base. So, way to be proactive there, X-Force. Ideally, they'd have stopped Black Tom before he even launched his attack. Certainly, it shouldn't have taken a team whose defining characteristic is that they're more proactive three days to get involved.