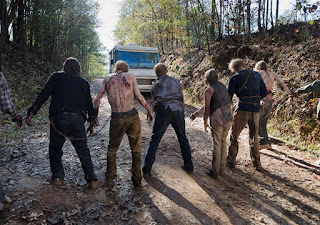 In today's day and age, season finales are a big deal. They're epic. They're game changers. They leave you wanting more.

The Walking Dead has been no different. They've always wanted to go out with a bang. But then there's Last Day on Earth. Hooo...boy. The only thing epic about this episode is its running time.

I've talked about The Walking Dead artificially lengthening episodes in an attempt to gain unearned gravitas before but this episode takes the cake. So little happens in this episode that I doubt it would feel satisfying filling up a regular length show let alone an episode with an extra 50% running time.

Last episode Maggie was having some labor issues. Alexandria has zero doctors now that Denise took an arrow to the eye so Rick and what is left of his crew decide to drive Maggie to Hilltop. They keep getting stopped by the Saviors who, instead of killing Rick's group, they just talk to them creepily and expend an enormous amount of energy and resources to play mind games with Rick's group for, reasons?

And that's a good 80% of the episode. Rick's group driving around, getting stopped and driving someplace else. I understand the idea was to build tension but, first of all, it started to become predictable by the third stop and, secondly, we started running into the magic people syndrome again.

How padded out was this episode? Near the beginning the episode focuses on a character we've never seen before and and gives us no reason to care about him. Not necessarily a problem except that his sole purpose was for Saviors to kill him later on. We never sympathize with him. When they hang him as a form of intimidation to Rick and company they literally could have had the same reaction from the viewers if it was just a random person (which he basically was). But no, we needed those early scenes about a meaningless guy because this episode needed to be 90 minutes.

We also have Morgan catching up with Carol in this episode. They have their usual conversations. Eventually Carol sneaks off only to get caught by the Savior that was chasing her. Just when it looks like Carol is a goner Morgan shows up and kills the Savior.

Seriously, Morgan killed him. Now, I know what you're thinking. This is a 90 minute episode. We have plenty of time to ramp up to Morgan killing by showing his thought processes, feelings of helplessness, the agony of realizing he has to go against his rigid moral code. And there will plenty of time to see the aftermath of that decision by Morgan and him attempting to cope with it.

Just kidding! Why bother with that when we can watch Rick and company in an RV driving down a road and then hitting a Savior roadblock for the umpteenth time. Seriously, Morgan kills a guy and it's given zero attention or analysis. It's just...unforgivable.

Slightly less unforgivable (but only slightly) is the fact that, after Eugene nobly sacrifices himself by offering to drive the RV by himself while the rest of the group goes on foot, Eugene gets kidnapped off screen. This is a 90 minute episode! Show us what happened!

Anyway, long story short, Rick, Carl, Eugene, Abraham, Sasha, Maggie and Aaron join Daryl, Rosita, Glenn and Michonne among then kidnapped. The real Negan finally makes an appearance and makes an interminably long speech. It takes him around 10 minutes to say that the Saviors are more powerful than Alexandria so they want half of Alexandria's stuff and he's going to kill one of them to teach a lesson. Yup, 10 minutes to get across that one sentence...and a rousing game of eenie meenie minie moe.

The episode ends in the first person point of view with Negan bludgeoning someone to death. Of course we don't find out who it is that died. Normally I'd call BS on this but I was so ready for the episode to end that I'd take this rather than having to watch another minute of this episode just to see Eugene dead's body.

Other Thoughts:
I kid, it might not be Eugene. Aaron is gay and TV LOVES to kill off its gay characters.

Apparently I missed it but The Walking Dead writers have been saying that a major character will be killed off at the end of the season. If I was armed with this knowledge the ending would've annoyed me even more.

Regardless, I think this ending is ill-advised. First of all, you piss off the fan base. Secondly, you lose any pathos and shock you get with the killing of the character. Since you know somebody died but don't know who you can't be sad at the moment. When you find out next year you'll be more focused on getting the answer to whose dead so the fact that they died will lose impact. Beyond that, viewers will be rooting for their favorite characters to not die and if it's not one of their favorites who die then they'll actually be happy that the character died where normally they'd be sad.

I seriously doubt if the writers know who is the one that's dead.

Who is going to let Enid out of the closet?

How'd the Saviors start those logs on fire? Oh yeah, they're magic.

So, the man Rick tried to kill without any provocation may end up saving Carol's life. That would be interesting if Morgan hadn't already gone back on everything he held sacred.

So now I know Dwight is with the Saviors but I have no idea why.

So, this is it for this season. Sorry I got bitter. And I also apologize for the erratic nature of these reviews. I got behind earlier in the season and it became really tough to catch up. I'll try and do better next season!
Newer Post Older Post Home
Posted by Dr. Bitz at 2:29 PM