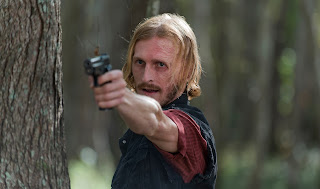 I talked about magic entering The Walking Dead universe before. It certainly feels out of place even though zombies defy all laws of physics. Yet it looks I have to get used to it. Once again we have people with the super human ability to just teleport to wherever they'd like.

This time it's Daryl's new nemesis, Dwight, and his group of people. Speaking of Dwight and his group, are they a part of the Saviors? I wouldn't think so. He hated them, right? So why is he acting like this? I'm so confused.

Anyway, Dwight has the ability to just appear anywhere he wants. As Daryl is spying on Dwight's camp, Dwight is suddenly right behind Daryl. He was completely undetected until he made his presence known. Rosita, who looked to be a step or two behind Daryl, didn't even see him show up. This happened against Daryl who is well versed in tracking and being aware of your surroundings. How did he do this?

What's even odder is this is Dwight we're talking about. He seemed pretty inept when he saw him kidnapping Daryl. I mean, yeah, he kidnapped Daryl, but that didn't last long and then he needed Daryl's help to save him his butt! How did he become a ninja assassin? Or was he just playing Daryl? But what would the purpose of that long con be? I'm so confused.

But sure, let's say Dwight has ninja skills. Does that explain everyone else in his group? One of them was able to sneak up behind Rosita undetected. Glenn and Michonne are talking by a lake looking in opposite directions of each other and somehow manage to be surrounded by Dwight's people who appear from behind trees like they're magic portals. How did they manage that? Were they all trained to be ninjas? None of them are heard or seen until they want to be. They're not even wearing camouflage! I'm so confused!

Meanwhile, Carol is leaving Alexandria but comes across a group of bad people (Saviors?). Naturally she's able to mow down everybody. Which is par for the course for Carol. But Carol is injured in the process and one man was left alive to stalk her.

Morgan and Rick are trying to follow Carol. They come across a man so Rick decides to start shooting at this person. Seriously. Without any provocation. The guy said he was looking for a horse and Rick shot at him! The dude got scared and ran away and Morgan got made and sent Rick away because of course he should be sent away. He just randomly shot at some guy!

Why did Rick do that? You couldn't even talk to him to try and get information out of him? It's so weird! I'm so...well...you get the idea.

Other Thoughts:
You know what sounds like a good idea? Having EVERYONE leave Alexandria so that it's defenseless.

Speaking of magic, the steam during Maggie and Glenn's shower magically seemed to know exactly where to be in case, somehow, someone was looking in on them.

The group Carol runs into wants to know why everyone assumes the worst of them. I would think randomly shooting at people would be one of the reasons.

It sounds like the Saviors are still around. So Rick and company didn't completely clear them out.

Glenn, Michone, Rosita and Daryl agree to split up. That plan is as sound as the plan to leave Alexandria defenseless.

I hate to point this out but Morgan's example of why they shouldn't kill has some specious reasoning. He says that because he kept that Wolf alive when Alexandria's walls came down and Denise was in danger the Wolf was able to save Denise. What he failed to mention was that the only reason Denise was brought outside and into the zombie horde was because the same Wolf Morgan saved forced her to go out there.

Maggie got her hair cut and apparently the baby didn't like it. Seriously, though, something is wrong with Maggie's baby.  It doesn't look good and, of course, Alexandria is sans a doctor.

It really feels this season (this series?) is running out of steam. This entire episode was just to get Daryl, Glenn, Michonne and Rosita kidnapped. Also, Maggie is having complications but nothing in the episode lead up to that. Carol started off running away and is still running away. Where we were at the start of the episode and at the end isn't much different.
Newer Post Older Post Home
Posted by Dr. Bitz at 12:33 AM