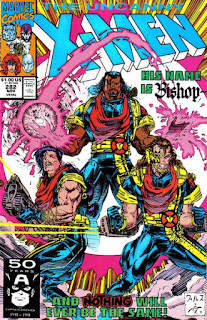 In a Nutshell
The first appearance of Bishop.

Plot
The X-Men return to the mansion with news of Fitzroy's attack and Jean's death, which shocks Xavier, as he didn't telepathically sense it. Meanwhile, Fitzroy visits Shinobi Shaw and claims leadership over the Upstarts. Back at the mansion, Forge has used data taken from a fallen Sentinel to locate Fitzroy's base, disguised as an Arctic iceberg, They X-Men, accompanied by Forge and Xavier, fly there, and when they get near, Xavier confirms his suspicions: that Jean has transferred her consciousness into the body of the nearest telepath: the White Queen. Inside the base, Fitzroy uses his mutant power to drain the life force of the captive Hellions and open a portal to the future, bringing forth his criminal allies. Jean, in the White Queen's body, attempts to stop him as the X-Men arrive. Better prepared, they make short work of Fitzroy's mercenaries and Sentinels, prompting Fitzroy to finish harvesting the Hellions and open a massive portal, through which dozens of criminals pour out. However, as Fitzroy gleefully watches the X-Men battle the criminals, he's shocked when three additional figures emerge from the portal, led by a man named Bishop, who declares that Fitzroy's little game just got a lot deadlier.

Firsts and Other Notables
Bishop makes his first appearance in this issue (albeit only on the final page of the issue), and his debut completes the Mount Rushmore of 90s X-Men, along with Jubilee, Gambit and Cable (though you could swap in Ninja Psylocke for Cable if you want only characters who are technically members of the X-Men at this point). We'll eventually learn that Bishop (first name: Lucas) comes from yet another dystopic future, one further down the timeline from "Days of Future Past" (from which Rachel Summers hails), a future where the X-Men are revered as legends and an uneasy truce exists between humans and mutants after they banded together to overthrow the Sentinels of "DoFP", and in which Bishop serves as an officer in a mutant police force called the XSE (Xavier's School Enforcers). 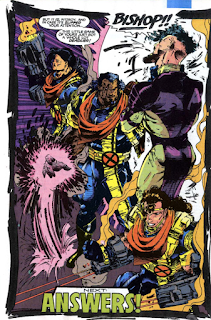 Bishop will hang around the book as an antagonistic figure for a few issues before officially joining the X-Men in issue #288, after which he'll become a mainstay of the team in one form or another throughout the 90s and into the 00s (along the way, introducing the X-Traitor storyline, one of the franchises biggest storylines of the 90s and having a prominent role in the "Age of Apocalypse" event), after which he'll take a massive heel turn during "Messiah Complex" and become an irredeemable villain who will, nevertheless, undergo a redemption arc in the second volume of Uncanny X-Force. His debut marks the end of a rush of new X-characters around this time, and is the last significant new addition to the team until the trio of Marrow, Maggot and Cecilia Reyes join post-"Operation: Zero Tolerance".

As detailed here, Bishop was essentially a creation of Whilce Portacio, created with the goal of adding some additional power to the Gold team and introducing a new character to grab readers' attention in the wake of the linewide relaunch. He originally intended the character to be Filipino, but Marvel's marketing department stepped in and asked that the character be black, because the series had a huge following amongst black readers who wanted to see a male black member of the team (eventually, it would be established - by Chris Claremont during one of his periodic returns to the X-Men - that Bishop is an aboriginal Australian, though that doesn't conflict with anything presented on page throughout the years).

In addition to Bishop, his two partners, Malcolm & Randall, appear for the first time this issue. They will not last long beyond this issue, though they've made a few additional appearances in stories set in Bishop's future.

This issue establishes (vaguely) that Fitzroy is from the future (the same as Bishop's, we'll learn), and has the mutant ability to absorb life energy, and then use that energy to power one-way portals through time. This is arguably the first in what will become increasingly ludicrous powers for new characters, and this one in particular has always bugged me both for its sheer specificity (it's not enough that he opens portals, or powers them through stolen life energy, but they're also time portals, and also one way. Compare "generates one-way time travel portals powered by stolen life energy" to "super-strength" or "magnetism"). The "the portals are one-way only" stipulation is also dumb, a caveat that effectively renders his power useless in all circumstances but the most specific, and seems to exist only to justify Bishop getting stranded in the past. 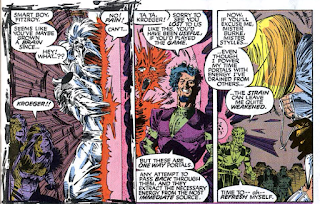 Fitzroy's toady Bantam, a minor character at best, appears for the first time in this issue, along with a bunch of super-powered criminals from Fitzroy's future, none of whom amount to much and all of whom get wiped out by issue #288 at the latest. 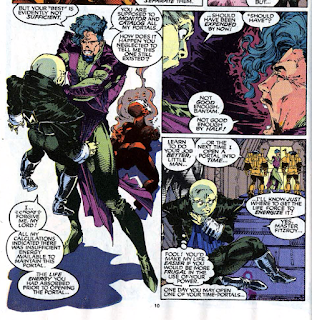 Whatever Hellions survived the previous issue are considered to be killed in this issue, though the only one who gets an on-panel acknowledgement is Tarot, despite having also been killed last issue (and despite later turning up alive in X-Force). The captive Hellions shown in this issue are also far greater in number numerous than we've ever seen before. 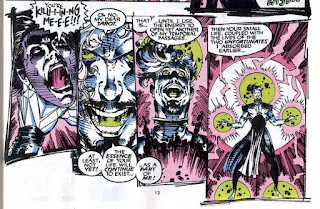 Fitzroy claims leadership of the Upstarts from Shinobi as a result of his success against the Hellfire Club last issue, even going so far as to cutoff Shinobi's finger to claim the ring which represents that leadership, despite Shinobi claiming he never agreed to Fitzroy's version of their contest's rules. All of this gets retconned away by later development in the story, as we shortly learn that a third figure, Gamesmaster, sets the rules of the contests, not Fitzroy, while the prize for winning constantly shifts. 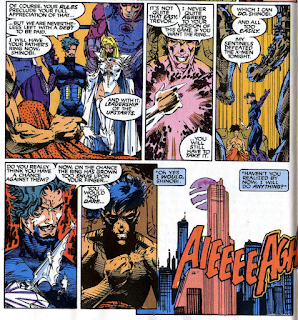 An acknowledgement of what a mess the end of last issue was, Storm's recap to Xavier of what happened is completely different from what we saw, something to which an editorial caption cops. 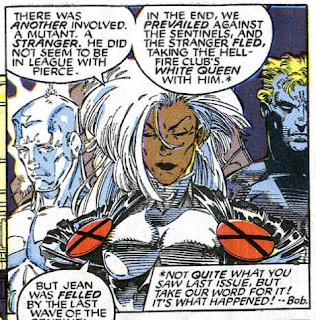 The cover corner box gets updated the heads of the Gold team; Bishop will shortly join them.

This issue received a second printing, with the logo colored gold.

Collection Recollection
I received this issue (along with a few others) in my Easter basket shortly after I started collecting. I have no idea how my parents knew I needed this particular issue (maybe they were working off the previous year's Christmas list, as I seem to recall a few years where I'd put individual back issues I needed but couldn't afford outright on such lists).

A Work in Progress
This issue opens with Forge and Professor X playing chess and carrying on like old friends, even though this is the first time I can recall that the pair have ever appeared on-panel together (outside of maybe some group shots, like the end of #277). 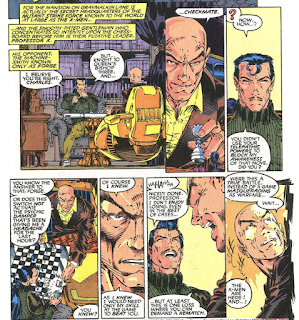 It's revealed that Jean survived her apparent death last issue by transferring her consciousness into the White Queen's body. While in that body, Jean is able to manifest her telekinetic abilities, which she probably shouldn't be able to do, as mutant powers seem wedded pretty firmly to each individual's biology (like, even though it's a mental power, it's Jean's physiology that enables her to use that power). 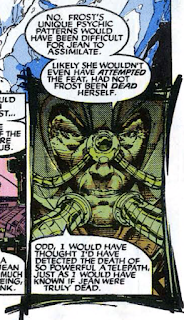 Jean's body is said to be in cryogenic freeze, and while it's suggested that White Queen is dead (enabling Jean's mind to inhabit her body), it will shortly be revealed that she is still alive, albeit comatose.

For Sale
A Wolverine video game is advertised in this issue; I've never played it, but if it's anything like the NES X-Men video game, it's terrible. 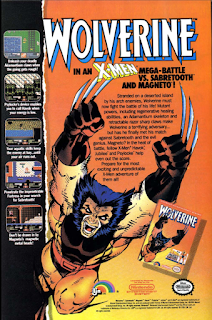 Bullpen Bulletins
This issue features a two page add for WAM (Wild Agents of Marvel), the latest iteration of the Marvel fan club, in the tradition of the MMS (Merry Marvel Marching Society) and FOOM (Friends of ol' Marvel), though I don't think WAM lasted as long as either, nor is as well-remembered. 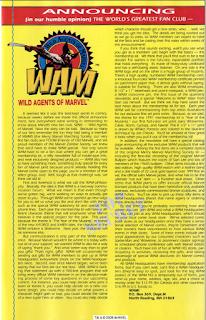 It's in the Mail
A response to a letter in this issue acknowledges (but doesn't really announce) Claremont's departure not just from Uncanny but from the franchise as a whole.

Austin's Analysis
Though he gets cover billing and this is notated as his first appearance, Bishop really only appears on the final page of this issue, making it not unlike the cameo shot of Cable that closed out New Mutants #86. So we'll leave Bishop for next issue, which serves as the proper introduction to the character. Instead, this is chiefly about resolving the big "Jean is dead!" cliffhanger of the previous issue (quickly establishing that she is not, in fact, dead nor never was, a point I underline simply to reinforce that this story doesn't belong in any "Jean Grey is the poster child for the revolving door nature of comic book death!" arguments), while also continuing the efforts to sell Fitzroy as a credible threat. We learn about his overly-complicated and comically-specific power, that he's from the future, and are shown additional examples of just how cruel and evil he is: the casual way he discards his own men, his off-panel cleaving of Shinobi's finger, and his wholesale slaughter of the Hellions. It's all very loud and messy (Portacio seems to be of the mind "why use one line when you can use three?"), but it does the job of further establishing Fitzroy as a smarmy, sadistic villain, even if it comes at the expense of the Hellions, and even if he never quite lives up to the level of attention and page space he gets in this issue.