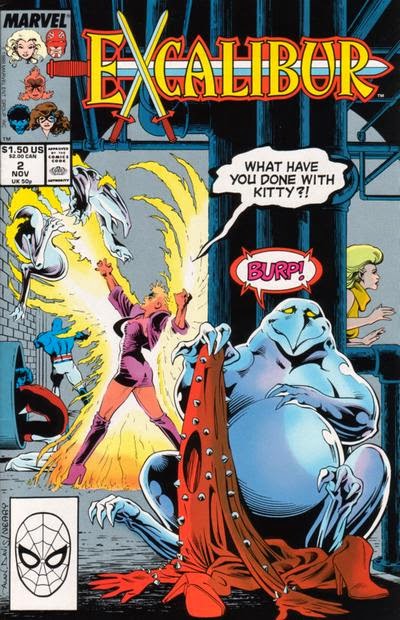 In a Nutshell
Excalibur rescues Shadowcat from the Warwolves.

Plot
In Loch Daemon, a young mutant named Colin is hunted by men employed by the crimelord Vixen. Desperate to escape, he is teleported away by Widget, much to Vixen's dismay. Meanwhile, in London, the Warwolves, including the captive Kitty, are chased through the subway tunnels by Excalibur. The Warwolves manage to shake their pursuit, and return to their lair, where Kitty is skinned. Feeling the pain of that act telepathically, Rachel takes to the sky, the better to focus all her attention on maintaining Kitty's consciousness. As she does so, her ascent is noticed in the night sky by both Nigel Frobisher and Courtney Ross. Meanwhile, Nightcrawler, following a lead on his own, his attacked and captured by one of the Warwolves. 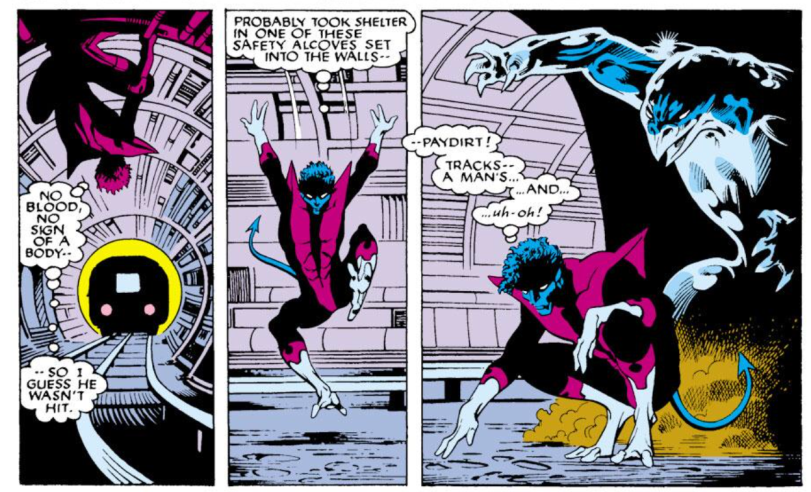 Alerted to this by Rachel, Captain Britain and Meggan are able to track Nightcrawler to the Warwolves den, interrupting his skinning and defeating the creatures. However, it quickly becomes clear that Kitty's phased state enabled her to merge with the body of the Warwolf which skinned her. She then manages to free herself of the Warwolf's body, climbing out its mouth, explaining that Rachel was able to hold her consciousness together until she was able to influence - and then control - the Warwolf's actions. With the Warwolves defeated, Excalibur debates what to do with them, unwilling to kill them but uncertain if the authorities can contain them. Kitty, however, offers up a solution, and the Warwolves are put on display in the London Zoo. Excalibur watches as the Warwolves entertain the crowd, with Nightcrawler worried that they haven't captured all of them.

Firsts and Other Notables
Colin McCay, the young mutant being hunted in the early pages of the issue, will eventually return from the dimension to which he escaped this issue fully grown, and join Excalibur as Kylun, making this is essentially the first appearance of Kylun. 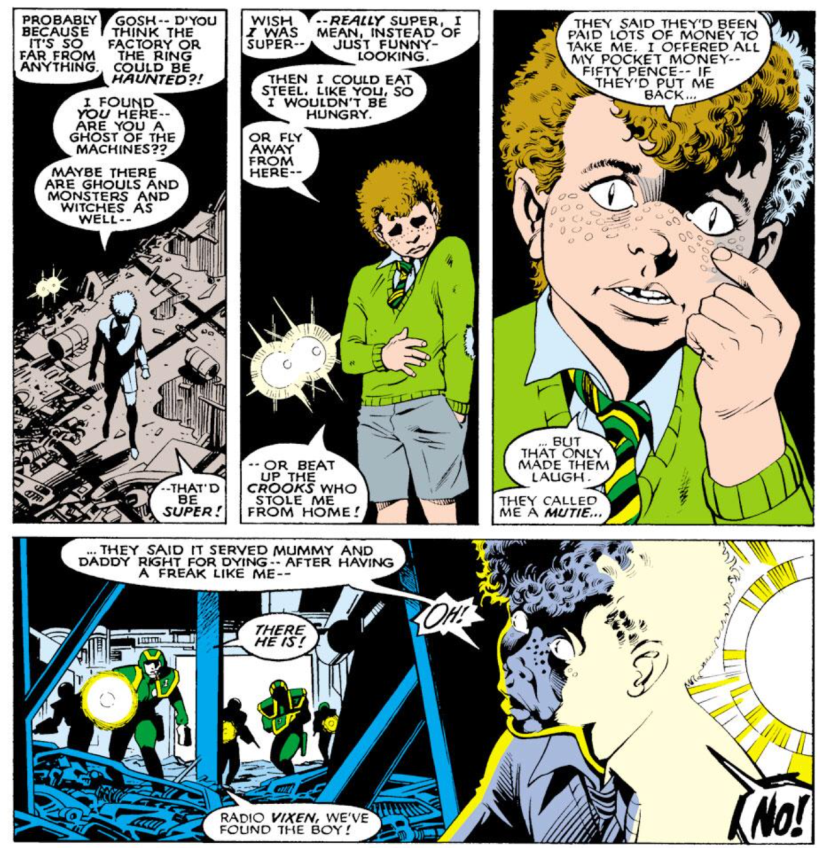 The Warwolves are captured this issue, and unwilling to kill them and afraid the authorities couldn't handle them, Excalibur puts them in a zoo. They'll return later in the series. 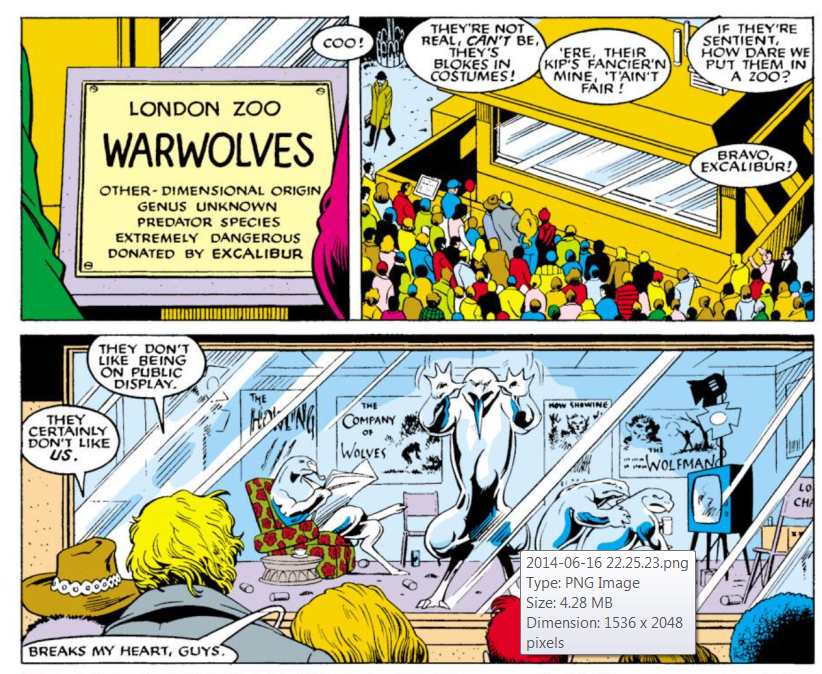 Vixen, a ruthless crimelord and old Captain Britain villain, appears in the series for the first time. 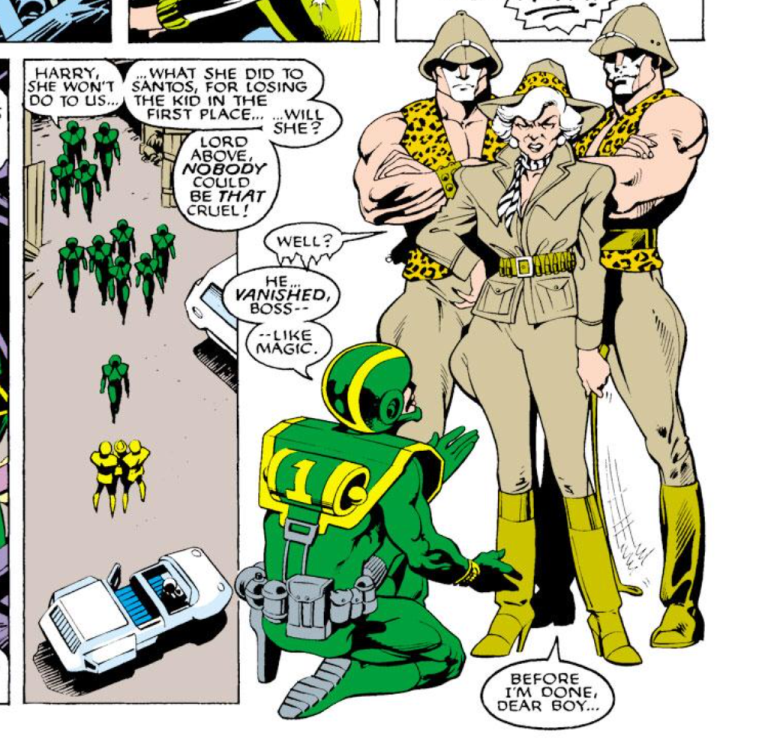 Right off the bat, he cover of this issue hints at the tone of the issue, and is much more tongue-in-cheek than what the other series usually feature. The back cover, meanwhile, features a pin-up of Shadowcat and Lockheed.

A Work in Progress
Widget has grown to the point that it now possess the ability to create a gateway, through which it can generate dimensional portals.

It's established that Kitty didn't share her "dress up as Rachel to lure out the Warwolves" plan with the rest of Excalibur before putting it into action because she was certain they'd veto it for being too dangerous. Which, you know, they were kind of right. 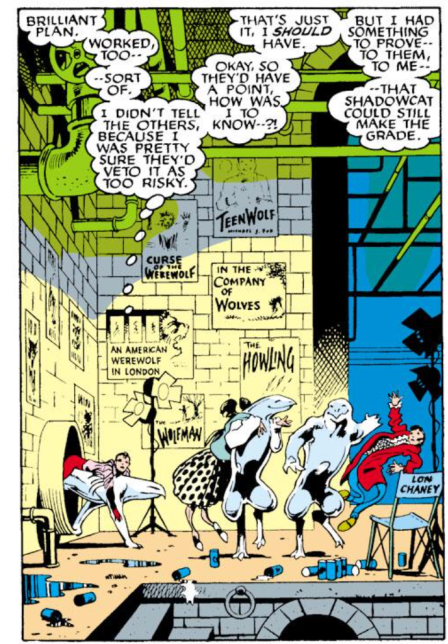 We see Meggan use her shape changing ability for the first time, transforming into an animalistic form in order to track Nightcrawler's scent. 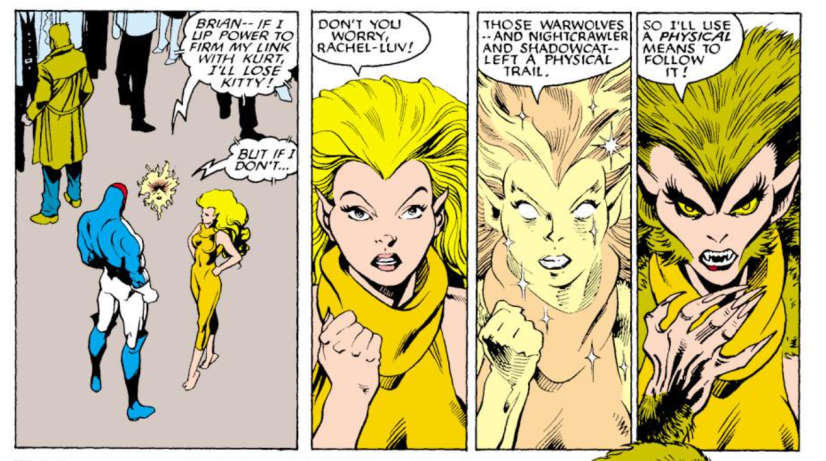 I Love the 80s
The walls of the Warwolves lair are lined with posters from movies with "wolf" in the title.

Claremontisms
You know the Warwolf which skinned Kitty has merged with her when it starts saying it "can't, must, won't". 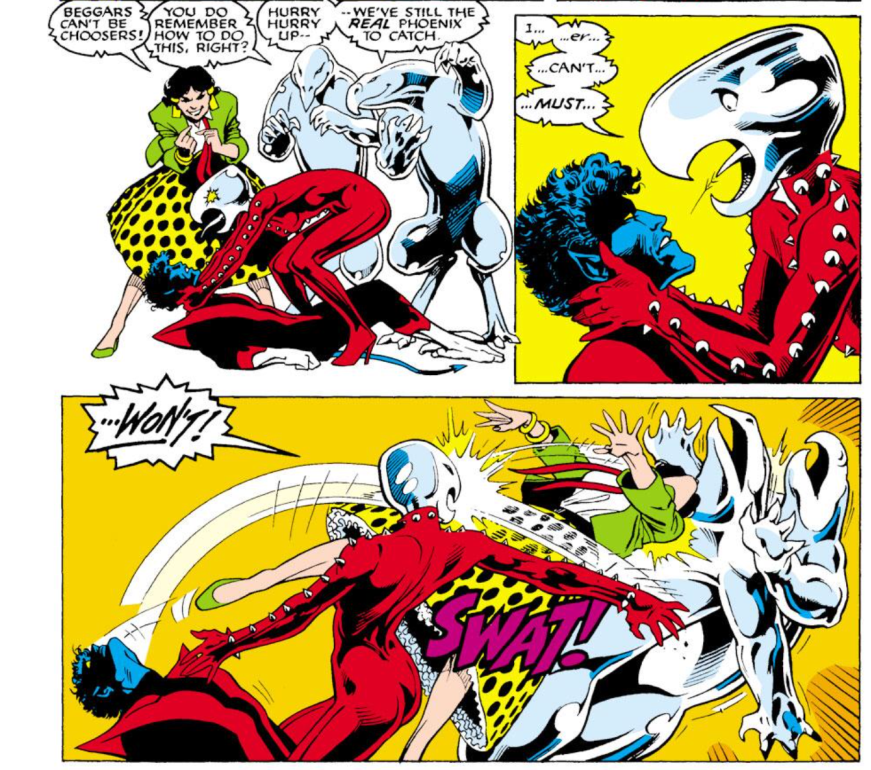 Artistic Achievements
One of the sound effects when Captain Britain punches one of the Warwolves is, appropriately enough, "punch". 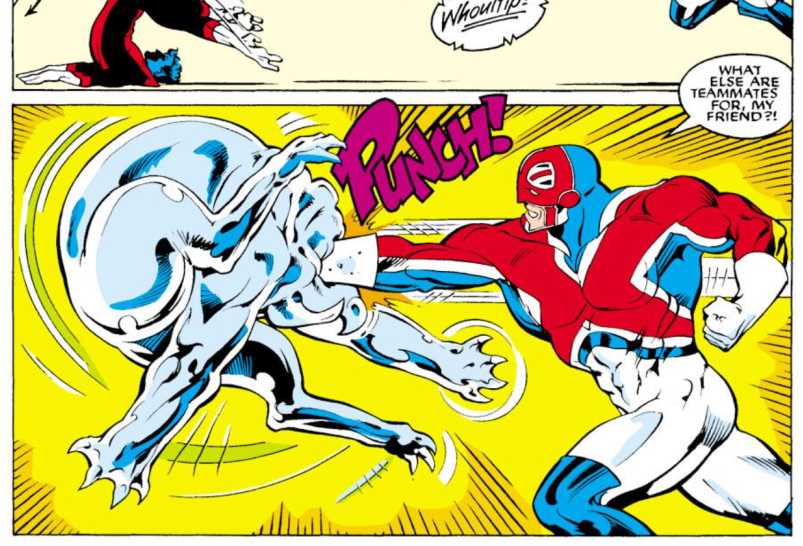 Teebore's Take
While not exactly whimsical, this issue definitely has a different tone than the usual X-fare. The Warwolves represent this tone best, at one time out-and-out creepy, as when they return to their lair carrying the skins of the people they killed, and then turning towards the macabre, as they take care to gently hang their skins like clothing on a coat rack, and then the downright silly as they kick back with a six pack of beer. Even the ending strikes this unique tone, as Excalibur rightly reasons that they can neither kill the Warwolves nor turn them over to the regular authorities. The solution is, again, unlike anything in any other X-Book, as the Warwolves are put into a zoo and the issue ends with one of them winking at the reader as he reads the newspaper, smoking a pipe. With the series still in its infancy, it can't exactly be said that this tone feels out of place, but while this isn't yet the vehicle for whimsy it will become, it's definitely carving out a unique place for itself amongst the X-books already.

Next Issue
Tomorrow, Wolverine makes the leap to a solo series in Wolverine #1. Next week, Colossus gets a Marvel Comics Presents feature, and a familiar villain drops in for Excalibur #3.
Newer Post Older Post Home
Posted by Austin Gorton at 12:00 PM