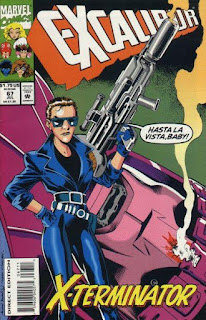 In a Nutshell
Excalibur defeats the Sentinels of the future.

Plot
As Tangerine senses the destruction of her RCX teammates by the Sentinels, she and the remaining members of the group help Excalibur prepare their assault on Sentinel headquarters to rescue Phoenix & Widget. Meanwhile, a captive Phoenix telepathically links with Widget, where she discovers that the Sentinels, having learned of alternate realities via Phoenix' escape to the past, are planning to wipe out mutants across all existence. Outside, Excalibur and the RCX are able to use a captive Sentinel to infiltrate the Sentinel base, just as Phoenix manages to escape her prison and free Widget. With Excalibur & RCX holding off the Sentienls, Phoenix & Widget work together to reprogram Master Mold, and through its link with them, all the Sentinels on the planet, to rewrite their first directive to protect all life, a directive immediately put into action as a Sentinel stops Ahab from killing Phoenix, but spares his life. As Ahab teleports away, Phoenix tells the RCX that the war is over, but it's up to them to win the peace. They ask Phoenix to stay with them, but she declines, saying that she has a new home, a new family and a new future with Excalibur.

Firsts and Other Notables
This marks Alan Davis' final issue of Excalibur, which also marks the end of a run stretching back to issue #1 in which either Chris Claremont or Alan Davis is nominally in charge of the series (there have been numerous, occasionally lengthy, gaps of fill-ins in the previous 67 issues, but all occurred with expectation that either Claremont or Davis would be returning soon).

Additionally, this marks the final issue of the series to be published outside the editorial X-Office; starting next issue, the series is brought under that umbrella, with Bob Harras credited as a group editor overseeing Terry Kavanugh. As a result, along with the installation of Scott Lobdell as a sort of regular plotter/occasional writer for the book, the series will, over time, develop a closer relationship with the other X-books, most notably it's participation in a X-crossover for the first time with its "Fatal Attractions" installment in issue #71.

That editorial shift combined with the departure of Davis also marks the end of the series' more whimsical "British" tone and a general lessening of its ties to Marvel UK/Captain Britain stories as it becomes more integrated with the other X-books, and the next several issues will see the book's core cast winnowed down as the series shifts focus away from the Davis created characters to the ones with stronger ties to the X-Men.

To that end, this is Captain Britain will disappear between this issue and the next, making this his final appearance in the series until #75 (when he'll come back as "Britannic"). Apparently, Marvel had plans to launch a new Captain Britain series (featuring a new character) as part of the Marvel UK imprint, and so this Captain Britain was sidelined until a way to bring him back with a new identity was decided on. However, the plans for that series fell apart in the wake of Marvel UK's commercial failure (and the general contraction of the market looming at this point in time), so the series never launched.

The final page of the issue sees Rachel declaring she belongs with Excalibur, and serves as a pretty appropriate final word for Davis as he departs. 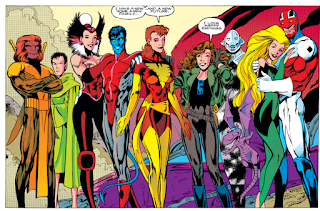 Ahab manages to escape in the end, though this more or less marks the end of the character in this iteration, with most of his story shifted instead to the soon-to-be-introduced Rory Campbell and whether he is destined to become Ahab in the future. 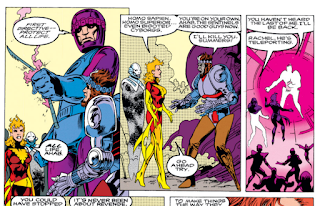 This issue's cover is a reference to the still-rocket-hot-in-1993 Terminator 2, and marks the last of the series more tongue-in-cheek, jokey covers, a tradition that dates all the way back to issue #2.

A Work in Progress
Arthur, one of the members of the RCX in the future, is revealed to be Nigel Orpington-Smythe, wearing Iron Man-like armor. 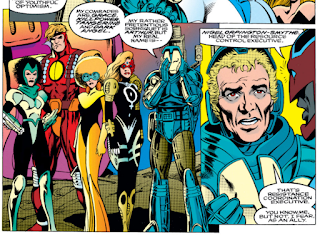 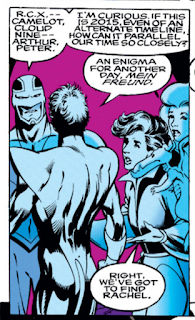 The fact that Sentinels communicate with each other verbally is noted, with Nightcrawler pointing to it as a result of their creators' fear of the robots acting independently, making their human characteristics an exploitable flaw.

All of the "Days of Future Past" Sentinels are reprogrammed by Phoenix and Widget to protect all life. 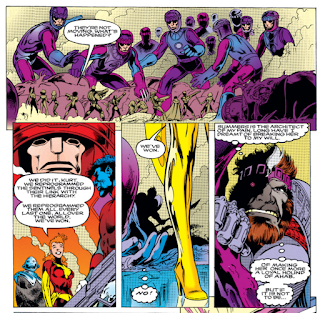 Young Love
Brian and Meggan reconcile following their "it turns out I don't like you when you're not hot" spat, just in time for a forced separation to tear them apart and fill them with angst. 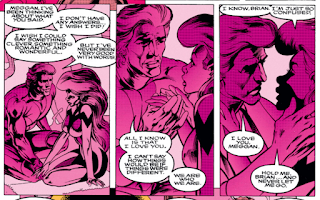 For Sale
Marvel's in-house subscription ads, which ran in most of their series, around this time featured a beach-going Excalibur. 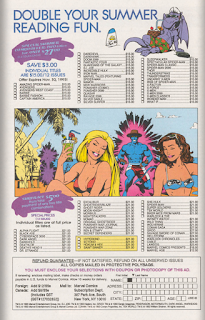 Austin's Analysis
Alan Davis' twenty-five issue run (albeit one peppered with regular fill-ins) comes to a close more or less with a bang, as he wraps up the brief "Days of Future Yet To Come" story by effectively tabling that setting for future use. It's tempting to once again ding Davis for cutting the story short, especially considering this issue is primarily Rachel and Widget's, with most of the rest of the cast playing second fiddle and contributing only nominally, but at the same time, the original "Days of Future Past" was only two issues long, and while this understandably can't compare to the impact of that story, having it also run but two issues makes for some fun symmetry.

And, in the end, it accomplishes what Davis set out to do, and arguably, what the goal of his entire run (aside from cleaning up oh so many dangling narrative threads) now appears to have been: to provide a resolution of sorts to Rachel Summers' character arc (something of a dangling thread in its own right), leaving her in a better place than he found her for future writers. Coming into the series, Rachel was a problematic character, her memories scrambled, the weight of a dystopic future on her shoulders, her relationship to the Phoenix vague and undefined. Davis, for the most part, has cleaned all that up, restoring her memories, clarifying the connection to the Phoenix Force (and scaling back her raw power in the process), and provided a happy ending of sorts to her future timeline, allowing her to remain a part of Excalibur, mostly angst free, with her full memories intact and at a workable power level (that, ultimately, it will be many, many years before anyone makes a concerted effort to do anything of significance with the character after Davis generously left her in such decent shape isn't his fault).

Reasonable ending to his run aside, the departure of Davis is still bittersweet. Those frequent fill-ins and occasionally dodgy pacing aside (the Jamie Braddock/Sat-yr-9 story was too short, the recent RCX story too long), Excalibur under Davis was easily and consistently the highlight of the post-Claremont X-books, rivaled only by Peter David's X-Factor (an all-too-brief run with art that could never match Davis') and Larry Hama's Wolverine (which was wildly uneven and aspired to do totally different things). Though unfortunately narratively (and often tonally) exiled from the other X-books, it was nevertheless, throughout the tumultuous '91 relaunch and subsequent Image Exodus, a reliable source of clever plotting (managing to tie up a number of dangling threads from both earlier in the series and older Captain Britain stories in a way that made them seem like they were planned out all along), deep characterization (with Rachel's aforementioned development, as well as Nightcrawler growing into a leadership role, the standouts, though Davis managed to explore and deepen each of the core five characters along the way), mythos-expansion (introducing Kylun, Feron and Micromax, exploring the Phoenix Force and Captain Britain's connection to Merlin/Roma) and fantastic art (from the big - Phoenix battling Galactus - to the quieter moments in which character was expressed merely through body language).

Post-Davis, this series will soon enjoy a brief surge in narrative relevance from thanks to a closer connection to the rest of the franchise, and there's one more creator-with-a-specific-style run to come, on par with Claremont or Davis (at least in terms of telling a story in a specific kind of way), but for the most part, this issue marks the high water mark for the series. It will run an additional fifty-eight issues, coasting through most of those on the foundations laid by Claremont & Davis and due to a closer association with better (and better-selling) contemporaneous titles, rarely, if ever, approaching any of the highs to be found in what's come before.