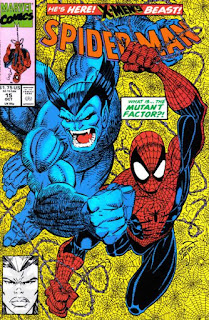 In a Nutshell
Spider-Man seeks out Beast for some family counseling.

Plot
Spider-Man and his wife, Mary Jane, discuss the idea of having a baby. Worried about possible complications that may arise given his unique physiology, Spider-Man seeks out Beast, who is giving a lecture on genetics at ESU. Arriving at the lecture in the midst of an attack by the anti-human Powerhouse and the anti-mutant Master Blaster, Spider-Man helps Beast subdue the two attackers. The two then discuss Spider-Man's situation, with Beast giving Spider-Man an 85% chance of some kind of complication should he and his wife have a child. The two then intervene when they spot a monstrous creature attack a truck on the street below, chasing the creature into the sewers. Just as it's about to kill Spider-Man, a man and a woman appear, calling out to the creature, which transforms into a child, the couples' son. Beast tells the parents about the Nursery, a facility that can help them raise their mutant child, and promises to help make arrangements for them. Spider-Man returns home, and both he & Mary Jane agree they're not ready to have a baby yet.

Firsts and Other Notables
This is the second-to-last issue of the adjectiveless Spider-Man series before Todd McFarlane leaves it, though Erik Larsen (who succeeded McFarlane on Amazing Spider-Man when he left to launch this series) writes and draws this issue. The art is still in the usual style of the book, with big pin-up-esque figures and everything bleeding out to the edges of the page (a trend in comics I'm generally not a fan of).

The issue is centered around Spider-Man's concerns about having a child, given the nature of how he got his powers. In the end, he and Mary Jane decide not to have a baby, but within a few years, Mary Jane will get pregnant, during the infamous "Clone Saga". Ultimately, that baby will die in childbirth (though it was hinted that the child survived and was ferreted away by Norman Osborn, I don't believe that hint has every been confirmed or followed up on), though a subline of books set in an alternate future, MC2, will feature a Spider-Girl who is the teenage daughter of Spider-Man and Mary Jane, and her series proved to be surprisingly hardy, running for a number of years and routinely dodging cancellation. 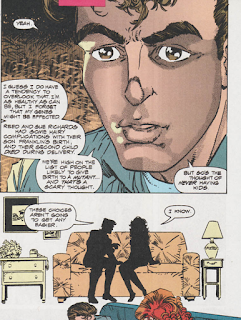 Beast arranges for the mutant baby at the end of the story to be taken to a facility called the Nursery, which is designed to care for mutant babies - I have no idea what he's talking about, and I don't believe any such place is ever referenced outside this issue. Also, with rare exceptions (like the baby in this issue, or Nightcrawler, who was born with blue fur even while his teleportation power developed later), most mutants don't manifest their powers until adolescence, which means that raising them as babies is really no different than any other baby, and such a facility wouldn't really be necessary (even the Inferno Babies were just normal babies, albeit ones destined to grow up and manifest powers).

Spider-Man and Beast fight an anti-human villain named Powerhouse and an anti-mutant villain named Master Blaster. As there names would suggest, I don't believe they've ever appeared outside this issue.

A Work in Progress
Beast cites the odds of Spider-Man having an atypical baby at 85%, which seems like a dubious number given that he's done no physical analysis of Spider-Man's blood, knows nothing about his wife, etc. 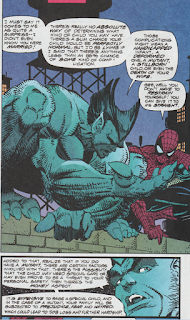 Beast notes that he didn't know Spider-Man was married, and Spider-Man asks him to keep it to himself. The Reference Section
In a particularly pin-up-y page, Beast and Spider-Man go into action spouting the catchphrases of Mighty Mouse and Thing. 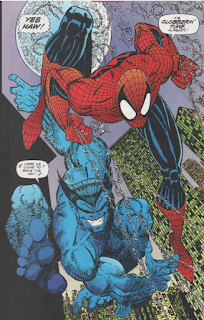 Austin's Analysis
This is a weird issue. The starting point is interesting, with Peter and Mary Jane discussing having a baby, with Peter's concerns about his unique biology making him seek out Beast, and the conclusion is perfectly reasonable, as the couple decides that neither is ready for a baby yet, all other concerns aside. But the middle gets a little dicey. Beast's litany of possible complications concerning a Spider-Baby can be read as him simply making sure Spider-Man is aware of all the possible consequences, certainly not a bad thing, and I hope that's how Larsen intends them to come across. But Beast also seems a bit raving at the same time, sounding at times more like the kind of loudmouth the X-Men are usually shouting down, and almost seems to be arguing against the idea of anyone having a baby. ever, if there's a possibility it could be a mutant (while also seeming to ignore the fact that most mutants don't manifest their abilities until they're teenagers).

Again, while his concerns are realistic, that seems wildly out of a character for him, to say nothing of any real world implications pertaining to special needs children that we could read into his speech (plus, the idea of adoption is never really raised as an option, though the couple's ultimate decision at the end tables that issue for now). Maybe that's giving Larsen, or this story, too much credit, but the main hook of the story (Spider-Man exploring the implications of his having a child) also invites those kinds of concerns. In theory, the complications inherent to him fathering a child is not a bad thing to have Spider-Man explore; in practice, it would have been nice if Beast could have made his point while sounding a little less like the kind of maniac he's usually fighting.

Next Issue
Tomorrow, more widescreen Spidey fun in Spider-Man #16, followed by the pun-tastic Wolverine: Rahne of Terra. Next week, the debut of Bishop in Uncanny X-Men #282.