Very few notable guest stars this year. I've selected three, although only one of them makes the leap from occasional guest star to recurring character.

Titus Welliver as Dr. Mondzac
Dr. Mondzac doesn't have a lasting impact on the show, but he does appear in eight episodes over the course of three years, and was clearly a favorite bit player amongst the producers.  Dr. Mondzac debuts in the season premiere "E.R.", which sees actor Titus Welliver dramatizing the idea that there are no small roles, only small actors.  Welliver only has a few lines in this episode, but wow, he's totally believable as an arrogant-yet-likable ER doctor who's adept at staying cool under pressure.  I believe this is the first time David Milch worked with Titus Welliver, and it's the start of a professional relationship that's continued to the current day.  Welliver has appeared on almost every Milch show since this episode aired, most notably playing Silas Adams on Deadwood.  Welliver also had a role on NYPD Blue's almost-spinoff, Brooklyn South.  He was unfortunately wasted there as Off. Jake Lowery, a dull-witted uniform cop who's the first to admit that he isn't the sharpest tool in the shed.  It's a waste of an actor so good at playing cocky and smart.

Brad Sullivan as Patsy Ferrara
Patsy Ferrara is an aging boxer who mentored Bobby Simone as a child.  We meet him today as a confused elderly man suffering from dementia.  Bobby does what he can to get his old mentor help, but has to accept the fact that the person he knew is essentially gone.  (Fans at the time noted that the concept of a detective dealing with an aging parental figure suffering from dementia had already been used with David Caruso's character in Season One.)  The character of Patsy Ferrara  makes a surprise cameo during Jimmy Smits' final episode in 1998.

Michael B. Silver as ADA Leo Cohen
The only bit player introduced this year who actually sticks around for more than a few episodes.  ADA Leo Cohen increasingly takes the place of the Sylvia Costas character, serving as the only representative of the DA's office (the show implies that the detectives deal with other ADAs, but we just so happen to only see Leo Cohen.)  Cohen is another character who's introduced as an antagonistic jerk, but in later episodes, he's fleshed out and given a more defensible viewpoint.  There's a Season Four episode that points out that Cohen actually cares far more about the Constitution than any of the detectives on the show do.
If you check out Michael B. Silver's IMDB page, you'll see that he's a working character actor who's appeared in almost everything over the past 20 years.

With the guest stars out of the way, I'll move on to discuss the writing staff this year.  Two important names can't be ignored -- David Simon and David Mills.

Simon is famous as the creator of The Wire, but his career in TV can be traced back to his novel Homicide: A Year on the Killing Streets, which was adapted into the long-running NBC drama Homicide: Life on the Street.  Simon wasn’t immediately embraced as a writer on the show, even though he essentially created it.  While working as a reporter for the Baltimore Sun, he co-wrote a Homicide script with fellow reporter David Mills.  NBC initially rejected the script, feeling it too dark to work as a television episode.  (It later aired as the Season Two episode “Bop Gun,” guest starring Robin Williams.)

Mills continued to pursue TV writing, and after reading some controversial remarks attributed to David Milch, wrote him a nasty letter.  Milch read the letter, remember Mills' name from a NYPD Blue spec script he never got around to reading, finally read it, and decided he liked this guy.  (The full story behind this is in Milch's book True Blue).

Mills was assigned a script in Season Two and impressed Milch enough that he was hired to join the staff and write the Season Three premiere.  "E.R." tells the story of James Martinez getting shot while stopping a stick-up, by a culprit who turns out to be a prison guard at Riker's Island.  The prison guard is currently working undercover to help expose corruption within the prison, so the NYPD higher-ups are reluctant to prosecute him, willing to overlook the tiny fact that he shoot a cop.  When the detectives discover this information, they tip off the media and the bosses are forced to press charges in order to avoid any further public embarrassment.  As outrageous as the story is, it comes directly from real life events conveyed by Bill Clark (although the cops’ manhandling of the suspect, even while he was in the hospital in need of a doctor, was even more extreme than depicted on the show.)

Mills passed away unexpectedly on the set of the HBO series Treme.  He maintained a blog up until his death, which offered some insight into television writing, and a few anecdotes from his days working with David Milch and David Simon.  It's worth checking out: http://undercoverblackman.blogspot.com/

David Mills' position as a producer on the show may or may not have helped his friend David Simon sell his script, "Hollie and the Blowfish."  (Simon mentions a call Mills made to him after joining the NYPD Blue writing staff in the newest edition of Homicide: A Year on the Killing Streets.  At this date, Simon was content to continue his work as a reporter and seemingly disillusioned with Hollywood after his brief experience.)  "Hollie" is an episode that every Wire fan needs to see, because it's essentially a network TV pilot for The Wire.  Almost every aspect of this episode will later make its way on to that show -- Det. Simone's old informant Ferdinand is clearly a mix of the Omar and Bubbles characters, and any Wire viewer will recognize the board with photos and strings listing out the soldiers in a drug crew, wasteful federal funding for drug cases, dealers hiding drugs in clever places, and greedy cops desperate for overtime; it's all here.  Amazingly, the actor playing the proto-Omar character even has a scar on his face -- actor Michael K. Williams, who played Omar on The Wire years later, has had a noticeable scar on his face since early adulthood. 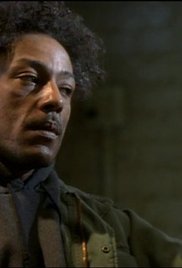 Simon's more cynical view of policework is also evident, with Bobby Simone being adamant that his old informant Ferdinand is going to "make cases" for him and Sipowicz...Simone's never that career-minded in his other appearances.  Some of the unique language of The Wire also appears, such as "The Bug" taking the place of AIDS, and drugs being referred to as "coke and dope."  ("Hollie and the Blowfish" also featured more gratuitous n-bombs than any other episode of the series.)  It still works as an NYPD Blue episode, however, and the scene that has Sipowicz confronting the BS-artist Sgt. Ray Kahlins over his lies about serving in Vietnam is one of the best Sipowicz moments of the season.  Considering that this is possibly Dennis Franz’s strongest season, that’s no small compliment.

Next time, I close out Season Three with the highs and lows...