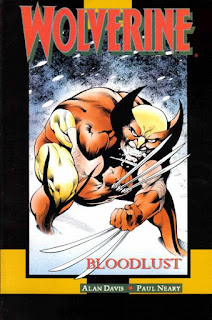 In a Nutshell
Wolverine fights a renegade splinter group of an ancient evolutionary offshoot of humanity.

Plot
At a bar in Canada, Wolverine is suddenly overwhelmed by the same sensations as when he's violently attacking someone, drawing the ire of several of the patrons and triggering a bar fight. He's led outside by a woman named Saskia, and the pair are attacked by a group of savage bipedal creatures. Wolverine manages to slay several of them, but the rest capture Saskia during the attack. Feeling his animalistic side getting stronger, Wolverine mediates, then dons his X-Men uniform before setting off in search of Saskia. Along the way, he experiences another sensation of savage fury, and watches through someone else's eyes as a family is attacked by the creatures. Just then, he's confronted by another group of the creatures, who bring him onto the spirit plane of Alshra, where they introduce themselves as the Neuri, a race of beings who retreated to the north in the face of humanity's violence centuries ago, but have been forced south by pollution. 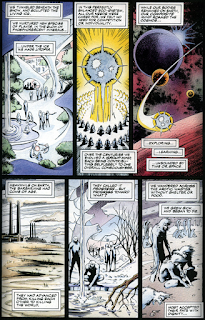 The ones who attacked Wolverine are renegades who have broken away from the Neuri group consciousness to attack humans, their savagery affecting Wolverine through his link to the Alshra. Wolverine agrees to stop the renegades and sets off in pursuit at the same time that the bar patrons, hunting for Wolverine, are attacked by the renegade Neuri. Wolverine intervenes, killing more of the renegades, but is badly injured and must be healed by the Neuri before going after the renegade's leader. Wolverine tracks him to cave, where he discovers Saskia. As he tries to shepherd her out of the cave, he realizes she has no scent, and was the renegade leader all along. Wolverine attacks and kills the creature, but their battle brings the cave crashing down around Wolverine. Eventually, he manages to carve his way out, and the remaining Neuri thank him, announcing they're returning to their homeland despite the dangers so as to avoid future conflicts with humanity.

Firsts and Other Notables
Aside from a bit of scripting work for Marvel UK and a couple co-plotting credits on Excalibur, this issue represents Alan Davis' first work as a writer, in advance of his assumption of the role as writer and artist on Excalibur in a few months' time (as well as other things, of course).

A squarebound prestige format issue printed on high gloss paper, like the previous Jungle Adventure, this issue essentially serves as the Wolverine annual for the year (1990).

This issue marks the first appearance of the Neuri, an ancient race that evolved alongside humanity, then fled to the north in the face of humanity's violence, before polution threatened their existence and drove them south into Canada and triggered a group of Neuri to become violent renegades, attacking humanity. They are telepathic and can access an Astral plane like location called Alshra, and can also send their consciousness traveling through space. I believe they pop up again in a future Marvel Comics Presents story, but otherwise, this is more or less their sole significant appearance. 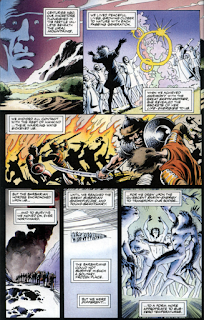 The Neuri tell Wolverine that his adamantium skeleton is holding him back from achieving a balance with his animal nature, and that his healing factor is actively working to reject the metal, an idea that Larry Hama will play with in later issues of Wolverine (particularly in the wake of Wolverine losing the adamantium during "Fatal Attractions").

The Best There is at What He Does
After battling the group of renegade Neuri, Wolverine is said to be injured beyond his body's capacity to heal itself, and the Neuri must intervene to save his life (and repair his costume). 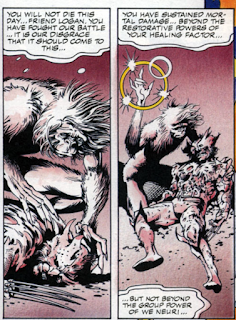 Young Love
Believing himself to be dying, Wolverine's final thoughts are of Mariko. 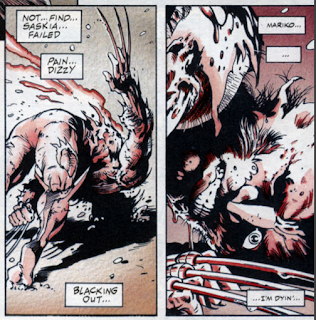 Teebore's Take
Pitting Wolverine against his bestial side is hardly a novel idea, even in 1990 - heck, it's basically the thematic core of the original Wolverine limited series, and it's the reason writers can't help dropping Wolverine into stories set in Japan. But a Wolverine story in which he fights his bestial side as represented by a group of evolutionary-offshoot telepathic New Age Bigfoots, well, that is a fairly novel approach to the trope. Not surprisingly, this is a weird story, thanks to the presence of the Neuri, but it's not a terrible one. Much of that is that is down to the Davis & Neary art - this story would probably be interminable long and downright dull in the hands of lesser artists, but the art helps smooth over some of the more cliche elements of Davis' scripting and keep the energy up.

In addition to the "struggle against his bestial nature" (a struggle this story suggests Wolverine has mostly won at this point, barring the influence of the renegade Neuri, which doesn't quite gel with other depictions of the character around this time), this issue also carries something of an environmental message (as the Neuri are being displaced by the effects of human pollution), something that remains, sadly, as relevant now as then, and Davis has some fun with the French-Canadians chasing Wolverine, who assume he's a member of Alpha Flight once they see him in costume and immediately embrace him as a superhero (despite wanting to kill him when they thought he was just a runty brawler). So while the main thrust of this issue is a fairly routine Wolverine story, the kind of thing we've seen before and will see again, there's enough little details on the margins (and, of course, some pretty great art) to help it rise above the pack.