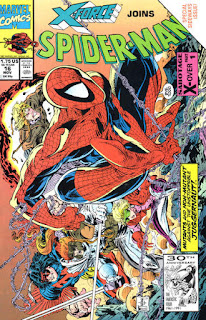 In a Nutshell
Spider-Man and X-Force battle Juggernaut, sideways.

Plot
Spider-Man arrives on the scene of the World Trade Center explosion to find most of X-Force fighting Juggernaut. Meanwhile, Cable, Domino and Siryn, along with Gideon and Sunspot, free themselves from the wreckage of the tower's upper floors. Below, X-Force's efforts against Juggernaut prove fruitless, prompting Spider-Man to intervene. In the tower, Cable and Gideon nearly come to blows, but Domino separates them, and Cable declares he's going after Black Tom. Below, Spider-Man tries to lead X-Force in a coordinated attack on Juggernaut, culminating in Shatterstar slashing Juggernaut's eyes. This causes an enraged Juggernaut to slam into a building, sending it crashing down on Spider-Man and X-Force. But they climb free of the wreckage, with Spider-Man declaring that now he's mad, and if X-Force wants to stop Juggernaut, he'll show them how.

Firsts and Other Notables
This is the second chapter of the "Sabotage" crossover between X-Force and Spider-Man, which began in X-Force #3 (though this is listed as part one). Following the linewide relaunch, the X-books grow increasingly more insular and cutoff from the rest of the Marvel Universe (culminating in "Onslaught" and Heroes Reborn, when a good chunk of the Marvel Universe gets cutoff from the Marvel Universe), but in the early goings, there's a handful of little crossovers like this, between one X-book and another seemingly random title (that usually has some kind of creator connection; Liefeld/McFarlane being buddies here, the later crossover between Peter David's two book, X-Factor and Hulk).

This is also the last issue of this series written and drawn by Todd McFarlane. It was launched in 1990 as a showcase for McFarlane (and serving as a kind of template for the release of X-Force #1 and X-Men #1), and the first issue was, before X-Force #1 came along, the highest selling comic book of all time. This also represents McFarlane's last work for Marvel; though Image Comics is still not quite a thing and the bulk of the Image Exodus is still about a year off, McFarlane effectively leaves Marvel with this issue.

In one of those gimmicks of which I've never been a huge fan, this issue is laid out so that it has to be turned sideways to be read (X-Force #4 will follow suit). Not sure why it bugs me; just something about the awkward way the comic has to be held to be read for minimal gain.

A Work in Progress
Spider-Man is somehow aware that Cable is the leader of X-Force. And also that X-Force is X-Force.

Boom-Boom, whom Liefeld apparently didn't draw into the first chapter of this story, enters the fray in this issue. 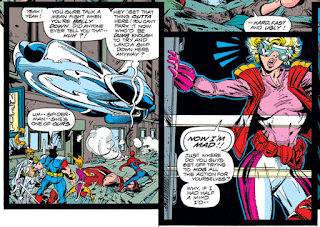 Shatterstar is able to slash at and cause some level of damage to Juggernaut's eyes, which doesn't seem quite consistent with how Juggernaut's power usually works (he basically has an invisible forcefield around him; just because he has exposed skin in places doesn't mean that skin is vulnerable while the rest of him isn't). 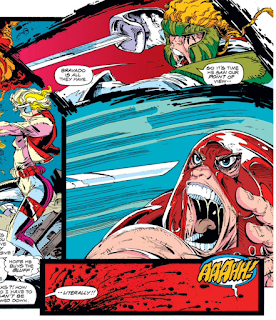 The Grim 'n' Gritty 90s
More unintentional echoes of 9/11 in the aftermath of the World Trade Center explosion triggered in X-Force #3; the description of the ash cloud in particular proves frighteningly prescient.

Austin's Analysis
To say this is an issue-long fight scene is a bit of an understatement. Usually, that means the focus of the issue is on a fight of some sort, with everything else (like subplot and character development) relegated to the margins. In this case, there's literally nothing but fight scenes, either between Spider-Man, half of X-Force and Juggernaut, or Cable and the rest of X-Force arguing with Gideon and Sunspot. Between that and McFarlane embracing the sideways gimmick to turn in multiple one and two page splashes, this entire issue can be read in about 90 seconds. It's less a chapter in a story than a scene in a story, stretched out to fill the page length of a chapter. The art isn't bad - McFarlane can have some whacky anatomy at times but it's nothing like Liefeld, and Juggernaut is consistently rendered in medium and close-up shots, making him an appropriately large and menacing presence, looming over everything. But the art is pretty much all there is to this issue.

I shudder to think how this reads to someone who was reading this issue as the final installment of McFarlane's vanity book (the series continues, of course, just sans McFarlane). Certainly, little here is germane to Spider-Man as a character (though McFarlane does get some good use out of him as the seasoned veteran with experience fighting the Juggernaut). This is pretty much all style, no substance, which seems an odd note to end a run (and his career at Marvel) on. Then again, from what I gather, this entire series (and most of McFarlane's career at Marvel) has been about style over substance, so maybe this is, in fact, the perfect end note for McFarlane after all.

Next Issue
Tomorrow, the New Mutants go medieval in Wolverine: Rahne of Terra. Next week: Uncanny X-Men #282 and X-Force #4.