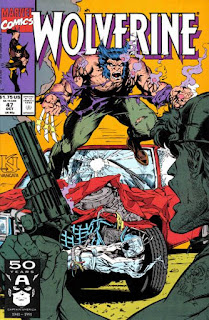 In a Nutshell
Wolverine tries to put down a crackhead.

Plot
Wolverine reclaims his motorcycle from where he parked it near the World Trade Center, while in Westchester County, a crackhead named Tracy returns to his childhood home and beats up his mother, taking her gun. En route to the X-Mansion, Wolverine hears gunshots, and pulls off the freeway in Westchester County as a police officer puts down a rabid dog, prompting him to recall a similar situation with Silver Fox, when their dog went rabid. Elsewhere, Tracy goes on a rampage through town, killing two convenience store workers and nearly running down two small children. Wolverine ends up alongside him at a stoplight, and becomes suspicious when he notices the handle bars of a kid's bike in the grill of Tracy's car. Tracy runs down Wolverine, then shoots him, but Wolverine pauses before killing him. Just then, Tracy is shot from behind by the police officer Wolverine met earlier, whose kids Tracy almost killed. Wolverine admits that he was unable to put down his dog, but that Silver Fox did it herself.

Firsts and Other Notables
This issue begins with Wolverine picking up his motorcycle where he left it, outside the World Trade Center, in issue #40. The cop trying to ticket him says the big is registered to "NFN Logan", with NFN standing for "No First Name".

Wolverine flashes back to his time with Silver Fox, in which their dog became rapid but Wolverine was unable to put him down, though I have no idea if the upcoming stories involving altered and implanted memories will render this particular memory a fiction. 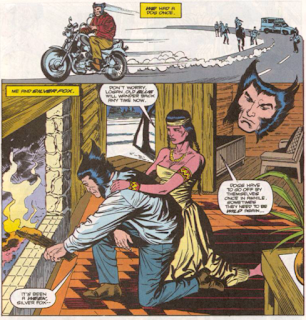 Otherwise, this is a pretty straight-forward fill-in story, featuring a bunch of characters we'll never see again. Art comes from Gerald Decaire, whose work and name I don't recognize.

A Work in Progress
In the process of picking up his bike, Wolverine provides a recap of recent events which, when stated matter-of-factly, are rather humorous. 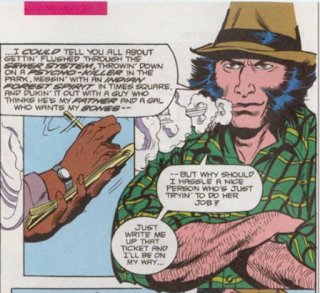 Clearly, Wolverine got the short-end of the stick when it came to the October 1991-dated X-books, running a one-off fill-in story while something of significance happens in every single one of the other series. It's a shame that the story which begins next issue, a deep dive into Wolverine's past, couldn't have been started a month early (presumably, it was timed such that the finale could land in the double-sized 50th issue). Technically, this isn't a pure fill-in (like the telepathic fetus story by David & Stroman in issue #44), as Hama is still on hand to write it, it references recent events in its opening pages, and features a flashback to Wolverine's time with Silver Fox (who very much becomes a thing during the upcoming historical deep dive). But it is nevertheless utterly superfluous and forgettable.

All that aside though, and the poor circumstance of being published during the X-books' biggest single month to date, this isn't a terrible story. The parallels between the rapid dogs (in the present and the flashback) and the crackhead aren't exactly subtle, but Hama doesn't bludgeon us to death with them either. And there's something interesting to the idea of Wolverine being unable to put down the rapid dog and the crackhead, with the twist that the two kids almost killed by the crackhead were the cop who killed the dog's kids being reasonably surprising. This is hardly high art, and it certainly pales in comparison to the goings-on in the other books, but as a one-off fill-in, this series has seen worse.