Following an uneven second season, NYPD Blue could have gone in any direction in Season Three.  Bochco and Milch could’ve made the call to keep pushing the limits of network television, or simply allowed the show to lose its rough edges and evolve into a generic weekly procedural.  With Season Three, they’ve found a nice balance.  Not every episode is The Most Important Show You’ll Watch All Year, some are relatively straightforward stories of cops chasing crooks, but when the series decides not to play it safe, it fully commits.  Again, I feel silly mentioning spoilers for something that aired twenty years ago, but if you don’t want to be spoiled about an important death, be warned.

Season Highlights
The decision to have Andy, Jr. join the police force was a fantastic decision by the creators.  If you’re familiar with the continuity of the series, then you understand that Andy, Jr. becoming a cop isn’t just a career choice, it’s the ultimate redemption of his father.  Sipowicz knows he was a joke as a father, and as the first two seasons made clear, he’s also clueless about how to repair his relationship with his son.  The fact that Andy, Jr. is willing to stay in touch with his father (even as he lives with his mother, who still refuses to speak to Sipowicz) speaks to Andy, Jr.’s basic nature.  He was angry in Season One, but eventually willing to at least give Sipowicz a chance to redeem himself.

While Sipowicz is quick to acknowledge that his alcoholism destroyed his relationship with his son, Sipowicz maintains that he was always a good cop, that showing up at the precinct and doing what he could to help people served as its own penance.  (After the tragedy that falls on Sipowicz later in the season, this idea reappears, but it’s clear at this point that it’s the delusional belief of a sad addict.)  If Sipowicz defines himself by anything, it’s by his gold shield.  He’s convinced himself that he failed as a father, but never as a cop.  Having Andy, Jr. decide to follow his father’s example provides Sipowicz an opportunity to pass on what he’s learned to the person he loves more than anyone else in the world, and it’s the first indication he’s ever had that on some level, he is admired by Andy, Jr.  It validates him not only as a cop, but as a father.

The scenes that have Sipowicz teaching the ropes to Andy, Jr. are some of my favorites from this run of the series.  Not only does the advice feel like something a cop would actually teach his son (they’re taken almost verbatim from Bill Clark’s writing in True Blue), but it offers some insight into how Sipowicz sees himself.  Even though Sipowicz has always been portrayed as sharp-witted, he views being a cop as a good profession for someone like him because he’s honest and “can read and write.”  This line makes it sound as if Sipowicz barely has a third grade education, which clearly isn’t true, but it does signify just how working class his background is (we later discover Sipowicz grew up in the housing projects and his father was a meter-reader for the power company.)  Andy, Jr. doesn’t appear to have many options in life, outside of the military or policework, and given how he’s been portrayed in the past, the audience has every expectation that Andy, Jr. should excel at the job. 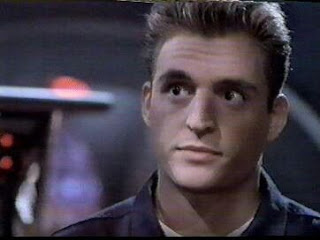 This could’ve been a legitimate fourth season for the series -- Andy Sipowicz once again finding redemption through The Job while his son learns the hard lessons of the streets.  It would’ve broadened the scope of the show while also reaffirming its commitment to the “cop mentality” brought to the series by Bill Clark.  So, what happens?  Andy, Jr. is killed, out of uniform, while trying to stop a bar stickup.  Sipowicz’s redemption is taken from him and his life spirals back into a mess of alcoholism, lies, and self-loathing.

Making this blow even nastier is the way the show’s been portraying Sipowicz as increasingly paranoid this season, only to have all of his anxieties dismissed as groundless.  Pregnant Sylvia isn’t facing a great health crisis, it’s only morning sickness.  (Establishing that Sipowicz has never heard of morning sickness is one of the silliest things attached to the character, but I’ve always been willing to overlook it.)  Andy, Jr.’s request to have dinner with his father isn’t to announce that he’s been kicked out of the Air Force.  Okay, he’s been discharged, but honorably, after an injury.  (An injury that somehow doesn’t prevent him from joining a New Jersey police force, a plot complication dismissed with literally one line of dialogue.)  Finally, in the episode before Andy, Jr.’s death, Sylvia goes into a difficult labor, but the baby is healthy and Sylvia turns out to be just fine.

The death of Andy, Jr. allows the show to reopen the question of Sipowicz’s belief in God, a subject addressed in the previous season during the buildup to his wedding.  In that episode, Sylvia wants Andy to meet with her priest before their church wedding.  He reluctantly agrees, and the priest quickly divines that Sipowicz has lost his faith.  Later in the episode, Dennis Franz delivers another Emmy-ready speech explaining the specific case that drove Sipowicz away from God, one that Alan Sepinwall noticed at the time was reminiscent of the case from Watchmen that drove Rorschach into insanity.  Sipowicz ends his monologue with, “And he asked me if I lost my faith?”  Sipowicz then turns to Sylvia.  “I got faith in you.”

At the time, that seemed to be the end of the discussion.  It’s the typical point of view of most television programs -- God stuff might be okay for the people watching at home, but our rugged, world-weary heroes have seen too much to fall for those old fairy tales.  (This specific episode was reran by ABC the week before the Death of Andy, Jr. episode, even though it was a year old at the time.  I’m thinking someone specifically requested this one be ran in that slot, given its upcoming significance.)

Sylvia’s priest returns to the series in an attempt to comfort Sipowicz, and their conversation in the interrogation room (serving, once again, as a substitute for a church’s confessional) is one of the most haunting moments in the series’ entire run.  This might be the finest Dennis Franz has ever been in this role -- after presenting a stoic face to the world, he finally unloads on someone, and that someone just so happens to be representing the higher power who’s stolen his son away.  If you have any investment in this series at all, there’s no way this scene doesn’t get to you.

Many fans at the time were eager to see this side of Sipowicz, which we only had a glimpse of in the first episode, become a fixture of the series.  And I can see why that would make for interesting television, certainly, although leaving a character in that state for too long works against the series’ larger theme of redemption.  And Sipowicz does find redemption by the season’s end, with the help of his new family, and a renewed faith that’s expressed during his infant son’s christening.  The irony of NYPD Blue devoting much of its early promotion to trolling religious conservatives and then turning the series into an examination of the lead’s relationship with God, and offering him solace within a religious institution after an unspeakable loss, is hard to ignore.  David Milch has spoken before of making a certain realization about his work after he befriended a Catholic priest.  “The darkness in which my characters resides is actually the shadow cast by God’s loving hand.”  It’s another aspect of Milch’s work that would seem to be a contradiction, but it serves to add even more depth to his writing.

Another quote from Milch resonates with this storyline -- “I was loaded when I did NYPD Blue.”  Knowing now that Milch was writing about Sipowicz’s struggles with God and addiction while he was still wrestling with the same demons makes it impossible for me to view these episodes as merely good TV.  Blue isn’t only significant for the boundaries it pushed regarding language or nudity, nor the bleak view of urban decay seen in the early seasons.  It’s also a statement from a brilliant, yet troubled man who used the vehicle he’d been given and tried to find some rehabilitation within it.

Which doesn’t mean this season is perfect, however.  There’s a storyline that must be addressed… 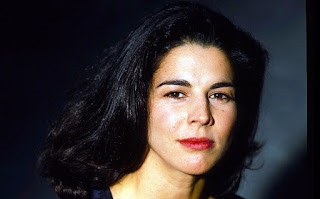 Now, Lesniak didn’t have the greatest introduction on the series, since it’s established from her first episode that she’s been transferred after her rocky romance with a fellow cop exploded.  The stories do point out that she’s a good detective, however, so perhaps the premise is that Lesniak is a solid cop with a messy personal life.  That’s a fine starting place for a character, but Lesniak’s personal life doesn’t receive a lot of attention after her first few episodes, outside of her consistent refusal to date Martinez.

In Season Three, she’s suddenly declaring that she’s gay.  Which she later admits was just a lie to get Medavoy and Martinez off her back, but somehow just saying the words made her question her sexuality.  This leads to what appears to be a “self-discovery/coming out” arc, but suddenly, here’s another swerve -- Lesniak declares that she’s not a lesbian and she’s going to date Martinez after all.

And if this wasn’t nuts enough, someone working on the show remembered that Lesniak was established as having a chaotic personal life when she was introduced, so we learn that Lesniak in a relationship is crazy possessive and jealous.  (I'm assuming this is what happened, at least.)  Some episodes will have two scenes in the course of a few minutes of Lesniak acting insane, apologizing to Martinez, and then pulling a Fatal Attraction again.  Martinez grows weary of her possessiveness and mood swings and breaks up with her.  Lesniak is shown working one more case in the season finale, and then she’s gone.  She’s never written out of the show, she just isn’t there when the next season begins.

Every aspect of this storyline is just a mess.  I realize that the writers are under no obligation to make the characters perfect, but when every turn of the story serves to make both characters seem either insane or utterly unlikable, it’s probably not the best romantic subplot.  I’m not sure if anyone has ever received a decent explanation for what was going on behind-the-scenes with this one, and it seems to be the most hated storyline in the history of the series.

Next Time…
I’ll tackle Season Four, which introduces a few characters that stick around for a while, features even more questionable portrayals of female characters, and has some excellent David Mills scripts.
Newer Post Older Post Home
Posted by G. Kendall at 5:30 PM