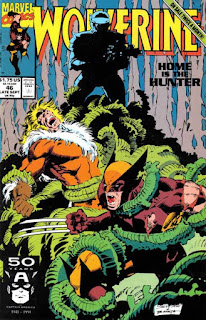 In a Nutshell
The four way fight between Wolverine, Sabretooth, Lady Deathstrike and Hunter in Darkness concludes.

Plot
The Hunter in Darkness interrupts the Wolverine/Sabretooth/Lady Deathstrike fight, and, recognizing Wolverine, joins in on his side, giving him a breather during which Jubilee attends to him. In the Morlock Tunnels, Albert continues to work on the power unit for Elsie-Dee. Wolverine rejoins the fight just as the sniper targeting the Hunter comes closer, and Wolverine realizes she's the daughter of RCMP Sergeant Doolin. She shoots both Wolverine and Sabretooth, and her poisoned bullets cause them to hallucinate events from their past. However, when Doolin targets Jubilee, Wolverine comes to his senses and knocks her out. But both Sabretooth and the Hunter have disappeared, while Lady Deathstrike is retrieved by Parvenue. Meanwhile, Albert nears the completion of his work on Elsie-Dee, just as the Hunter finds a new home for himself in the tunnels.

Firsts and Other Notables
In a brief shared flashback between Wolverine and Sabretooth, it's revealed that the pair used to be partners of some sort in the past; in the process, Sabretooth realizes that his belief that Wolverine was his son was fabricated (by what we'll later come to know as the Weapon X project), bringing to an end his recent insistence on calling Wolverine some variation of "Sonny Boy" all the time. 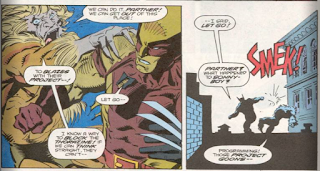 That flashback also seems to reference details from "Weapon X", making this the first Wolverine story to reference it, albeit indirectly, and features a landscape studded with spikes; this spiky landscape becomes a sort of visual shorthand for events taking place in flashbacks/altered memories moving forward, as the series begins a deep dive into exploring Wolverine's past, and issue #63 will reveal that the spikes are visually symbolic, implanted in Wolverine's (and others) mind to help cement memory implants. 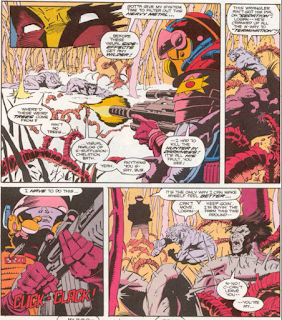 This is the last chronological appearance of Sabretooth wearing his original costume; his next appearance in X-Men (vol. 2) will feature his new, Jim Lee-designed look that has mostly stuck with the character since.

This issue reveals that the mysterious sniper from the previous issue is Emmy Doolin, the daughter of the Mountie who encountered Hunter in Darkness in its first appearance, and then died as a result of that encounter. 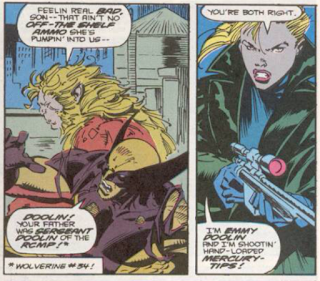 Albert mentions a surprise to Elsie-Dee; its nature will be revealed in issue #51, which marks the next appearance of the pair (following appearances in every issue since their first appearance save #44, they take a little break after this).

This issue concludes with a one-panel preview of X-Men (vol. 2) #1, and a one-page preview of Rahne of Terra, the next upcoming Wolverine one-shot.

Teebore's Take
Most of this issue is just more of the same from last issue: more of Albert soaking up power for Elsie-Dee, more claw-centric fighting from Wolverine, Sabretooth, Lady Deathstrike and the Hunter in Darkness. The one wrinkle that gets thrown into the story is when Wolverine and Sabretooth start hallucinating their shared past during the middle of the fight - much as with the whole "Sabretooth is Wolverine's father/no he's not" plot in issues #41-42, this is another tease meant to indicate that the series is, for better and worse, about to delve pretty deep into Wolverine's past (and stay there, off-and-on, for awhile), beginning in earnest in the next story arc (after next issue's fill-in). Other than that, this issue is pretty much more of the same from the series during this stretch - fun stories with good art that flow well from one issue to the next, but which don't really standout much in terms of individual issues.

Next Issue
Next week: a new beginning in Uncanny X-Men #281, Juggernaut fights X-Force in X-Force #3, and a new team debuts in X-Factor #71.