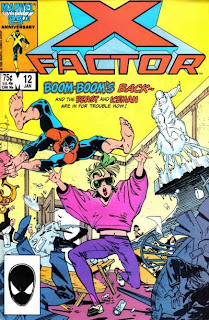 In a Nutshell
X-Factor takes in Boom-Boom

Plot
At the hospital, Warren is told that he'll die if his wings aren't removed, but he refuses, saying he'd rather die than lose his wings. Meanwhile, at X-Factor headquarters, Hank, Bobby and X-Factor's charges, including the rescued Morlocks, are having breakfast when they receive a call from Boom-Boom, telling them she's found an evil mutant. Though their headquarters is already overcrowded, Hank and Bobby decide to investigate. Back at the hospital, Jean sees a news report about the firebombing of an apartment believed to belong to relatives of a mutant, followed by an interview given by her sister, Sara, expressing support for mutants. Realizing Sara may be in danger, Jean tries to call her, but doesn't get an answer, so she and Scott leave to warn her in person. At an arcade in Manhattan, Vanisher tracks down Boom-Boom, and agrees to give her a larger cut of the money she steals if she returns with him. 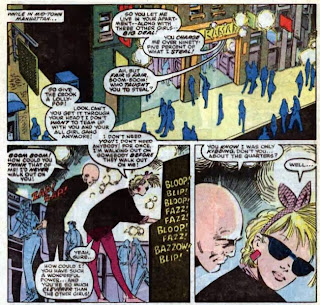 Worried what X-Factor might do to him, Boom-Boom covers for Vanisher when Hank and Bobby arrive, setting off one of her time bombs then running off. Despite their better judgement, they chase after her in their X-Terminator guises. Meanwhile, in Cleveland Ohio, an anorexic young girl is approached by Apocalypse, and extended an invitation to become Famine, third Horseman of Apocalypse. Back in New York, Scott and Jean arrive at Sara's house to find it deserted, then get caught in the blast as the house explodes, barely escaping alive. At the hospital, Warren, now facing fraud charges for his role in X-Factor, discusses changing his will with Hodge, so that everything he has is left to X-Factor. In Manhattan, Iceman and Beast catch-up to Boom-Boom, who tells them her story, and they agree to take her in. Back at the hospital, Scott realizes that Madelyne could be the target of anti-mutant attacks as well, and resolves to return to Alaska and track down his wife.

Firsts and Other Notables
Apocalypse recruits his third Horseman, Famine, who is Autumn Rolfson, a young anorexic mutant who can disintegrate organic matter, making her first appearance in this issue. 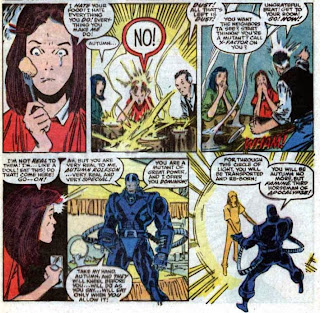 The news report Jean sees regarding the firebombing of the apartment of a mutant's relatives is a reference to the bombing of Karma's apartment in New Mutants #46. Similar to the events of that issue, Jean visits her sister Sara's home worried that Sara might come under attack for her support of mutants, only to find the house deserted, Sara and her family gone, moments before the house explodes. 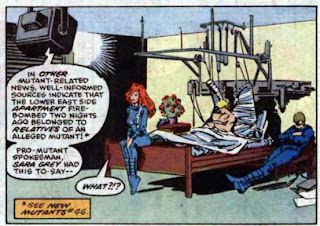 And as with the disappearance of Karma's siblings in New Mutants, Sara's disappearance kicks off a minor but long running mystery. It will eventually be revealed that Sara's home was destroyed by the Right (a soon-to-be-revealed militant anti-mutant organization), and her children (Jean's niece and nephew) will turn up briefly shortly thereafter, but Sara's fate will not be revealed until the mid-90s, during the "Phalanx Convenant" linewide crossover. Needless to say, perhaps, Sara's ultimate fate is most likely not what Simonson had in mind while writing this issue, and though they disappear in similar manners, the resolutions to the disappearances of Sara Grey and Karma's siblings are not related. 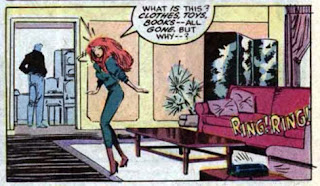 Marc Silvestri fills in on pencils. Whether it's Wiacek's inks or just a few months' improvement, his work in this issue looks more like what we expect from his pencils than his work in issue #8.

A Work in Progress
In a neat, Claremontian little detail, Warren's doctor notes that they've even called in a bird specialist to help with the damage to Warren's wings. 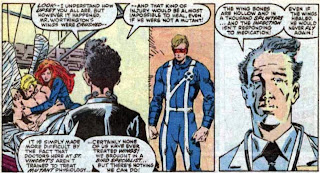 Skids is seen having trouble grasping a piece of toast due to her force field, yet when she finally gets ahold of it, she proceeds to cram it into her mouth. So, that confirms she's capable of eating, but it doesn't exactly make sense that she has a hard time holding food in her hands yet it slips past her force field into her mouth just fine...

Caliban swears he won't rest until he avenges the fallen Morlocks. 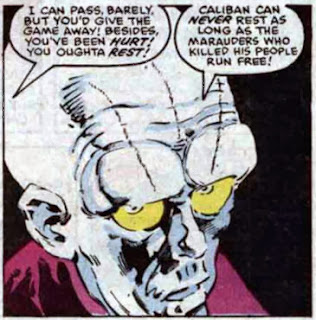 It's established that Jean hasn't told her family that she's returned from the dead/was never dead/Phoenix wasn't their daughter/sister yet.

Boom-Boom quickly realizes that Beast and Iceman are the same X-Factor guys who responded to her call, making her more observant than apparently the vast majority of the Marvel Universe.

Beast realizes that Boom-Boom is the person who called the Avengers about the Beyonder in Secret Wars II #5, while Boom-Boom mentions having visited the X-Mansion but not being too impressed with the X-Men (who were preoccupied with the Beyonder).

I Love the 80s
At one point, Boom-Boom is at an arcade, calling X-Factor from a pay phone, which costs a quarter. That's an 80s trifecta for you.

As with Skids, Boom-Boom at this point is, generally, very much of her time in terms of her appearance.

Um, Vanisher, if you want to get away from X-Factor, why aren't you, you know, vanishing...? 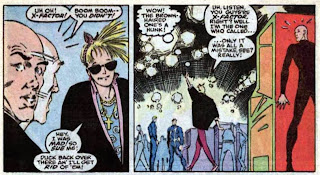 Scott Summers, Husband of the Year
In the wake of the firebombing of Sara Grey's house, Cyclops realizes that something similar may have happened or could happen to Maddie (explaining why he can't get a hold of her), prompting him to finally go home to Alaska and track her down.

Young Love
Boom-Boom thinks Bobby is a hunk, and she'll spend some time moving forward crushing on him.

As Scott declares his intent to return to Alaska and reconcile with Maddy, Jean worries she's lost him for good.

Human/Mutant Relations
As Hank and Bobby, in their X-Factor uniforms, chase after Boom-Boom, the crowd at the arcade attacks them for being mutant hunters.

It's in the Mail
Elvis Orten aka Uncle Elvis, one of the more well-known and prolific letter hacks from this era, has a letter published in this issue.

Teebore's Take
This issue is principally concerned with two things: bringing Boom-Boom into the fold and motivating Scott to finally go back to Alaska and try to reconcile with his wife. The former will prove surprisingly significant, given the characters of-the-moment look and origins as a one-off Secret Wars II character, as Boom-Boom becomes first a regular supporting character in this book, then a part of New Mutants before becoming a mainstay of X-Force well into the 90s. Her introduction here sticks out in contrast to the other events of the book - as Angel debates between losing his wings or dying while Scott and Jean investigate an attack on Jean's sister by anti-mutant extremists, Hank, Bobby and Boom-Boom get wrapped up in whacky hijinks at an arcade. Tonally, tt's an odd fit for a "Mutant Massacre" tie-in, but it gets the job of bringing Boom-Boom into the fold done.

Meanwhile, having exposed, in part, the X-Factor ruse to the public and had the characters question the effectiveness of pretending to be mutant hunters while also having Jean learn the never-should-have-been-a-secret fact that Scott is married, Simonson continues her rehabilitation of the title by turning her attention to Scott, creating a situation that forces the character to accept his responsibility and make more effort than dialing the phone a lot to reconcile with his wife. This being comics, and X-Factor, it won't be as easy or straightforward as a simple return home and heartfelt apology, but after twelve issues, one full calendar year, publication time, after his initial uncharacteristic heel turn, Scott Summers is finally going home.