How I Met Your Mother 9x09: Platonish 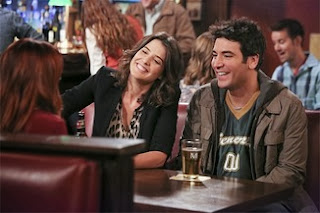 Nine episodes into the season and we finally get a legitimate "the wedding weekend is just a framing device for a flashback" episode promised by the creators before the start of the season. I was expecting (and hoping for) more of them, frankly, but hopefully this wasn't the last. Needless to say, this episode was a marked improvement on the previous one, and while I'm not as down on the overall setting of the season as some (there are good stories that can be told set at Farhampton, the show just hasn't told very many of them yet), there's no denying that this episode benefited from a trip back to familiar places and a story built around something other than the usual Robin/Barney pre-wedding plots.

It also benefited from the presence of the Mother, echoing her role in the season's premiere episode to do something other than pop up in the last five minutes to hang out with Ted in a flashforward. The idea that Barney met the Mother, before Ted, before Farhampton, and that she played a significant role in his life by making him realize he wanted to be with Robin, is the kind of coincidence that you almost only ever see in Hollywood, but gets something of a pass on a show like this, one built around the idea that coincidences and unseen connections can play a significant role in a person's life in general, and that has specifically established previously that the Mother, unbeknownst to Ted, has been hovering within his sphere of influence for several years now.

Other Thoughts
It also helped that this episode was pretty funny, largely thanks to some classic Barney hijinks (my favorite of his challenges was the one where he couldn't use the letter "e", similar to a one-off joke on a classic Simpsons episode but taken even further here) and the idea of Ted and Marshall being Washington Generals fans (but maybe that's just my lingering affection for any and all Harlem Globetrotters jokes, thanks to The Simpsons and Futurama).

Carter Bays said on Twitter that the events of this episode take place between last season's "Splitsville" (featuring the third and final breakup of the Autumn of Break-Ups, between Robin and Nick) and "The Tramp Stamp" (the one where Marshall's old law school buddy Brad interviews with Marshall's firm, but it turns out to be a ruse to get intel on an upcoming case). "Splitsville" is the episode immediately after the one in which Ted and Victoria break-up because Victoria believes Ted still has feelings for Robin (which explains why Marshall was bringing up the subject with Ted at the game), so presumably this flashback is meant to depict the moment when Ted realizes Victoria was right and fill in the gap between his insistence to Victoria that Robin is just a friend and his struggle to let Robin go immediately prior to her engagement to Barney (of course, all of that gets wiped out by the fact that even after he lets go of his feelings for her, he decides he's still into her after she gets engaged).

Chronologically-fitting it may be, the Ted/Robin stuff was, as usual, the weakest part of the episode, and I'm not sure why they even bothered with Ted's storyline. It seems kind of pointless to show Ted realizing he still has feelings for Robin at a point in time after which we've already seen him let go of those feelings (just prior to Barney's proposal) then reacquire them (sometime before he helped Robin look for her locket towards the end of last season). I get that this is supposed to show how down in the dumps current Ted is (in that when he was deciding "he had time" to win Robin back, Barney was acting to make what he wanted happen, just as Ted used to do) and that the show likes to ride the Ted/Robin merry-go-round whenever possible, but it still seems odd to take the time to showcase this particular stop on that ride when its already been rendered moot by at least two subsequent stops, all just to make present Ted's "it's always darkest before dawn" moment all that much darker (especially when it is a false darkness, as the Past Ted of this episode is ultimately right).

As much as it borders on the magical (and extreme Manic Pixie Dream Girl-ness), I like the way the show is weaving the Mother into everyone's lives prior to her actual meeting with Ted. We already know she's the perfect girl for Ted, but given that we won't ever get to see much of the Mother hanging out with the gang, it helps sell the idea that she's someone who could fit it amongst them as well. Though I do hope we'll see some kind of reaction from Lily/Barney/whoever else meets her before Ted when they realize the girl Ted is now dating is the one who gave Lily cookies on the train/helped Barney get back together with Robin/etc.

Not that I was really expecting otherwise, but the somewhat-ballyhooed appearance by Bryan Cranston amounted to very little, and was clearly designed in such a way that Cranston could pop in, shoot his material in the minimal amount of time, then get out without ever having to coordinate his time with the rest of the cast, making things as easy as possible on everyone while still giving CBS something to promote. Still, this at least set up Ted's post-wedding move to Chicago, explaining why he's going to Chicago of all places. Though in the end, Bryan Cranston will still be disappointed.

Ted: Yeah, ’cause it’s 1994 and I’m going to pick up the phone without knowing who’s on the other end.