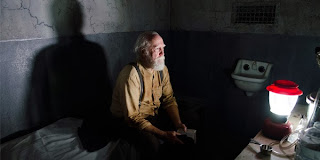 About three years ago I watched The Walking Dead pilot. I wasn’t sure where the series was headed but I knew it had potential. As the series progressed I would get frustrated by The Walking Dead's inability to live up to that potential. (And by its lack of nudity, but whatever.) This season has had its ups and downs.  I liked the premiere but the following episodes were uneven for me. Then came this week's episode: Internment.
Internment is everything I envisioned The Walking Dead could be when I first watched it.

Two things separate this episode from ordinary The Walking Dead episodes. First, this had some real suspense. Yes, a lot of episodes have action. Plenty of times a zombie will jump out or characters will get surrounded but most times it feels like it's all an excuse to see a zombie's head get squished.

This episode put already incapacitated (by illness) characters in dimly lit closed quarters with zombies lurking behind every corner. Toss in the fact that the characters in the most peril are some of the most beloved and you have a recipe for viewers sitting on the edge of their seat. Heck, even if a zombie didn't get them, the illness still might.
The second thing that sets this episode apart is that the challenges and peril the characters faced were not caused by their own stupidity. This is actually a huge deal. I could quibble about how best to try and keep zombies from roaming free in the quarantined block but there were extenuating circumstances.
Everyone was sick, worn out and stressed. Beyond that you just can’t close the cells on people and lock them in because you have to let the patients have the ability to exit their cells if need be. And even when zombies did start to roam it didn’t get out of hand like in the second episode of the season. There were only two to three zombies in the quarantined block. It was the fact that the people in the block were barely able to move at that point that made the otherwise paltry number of zombies pose such a threat.
Then you have Rick and Maggie/Carl handling the hoard outside. The gathering of zombies could have been handled under normal circumstances but with most of the group sick and most of the healthy people out getting medicine the prison yard was woefully understaffed. This is what led to the zombie hoard getting too large. Even then, everyone in the prison yard recognized this as a problem. There just wasn’t a whole lot they could do about it. They did what they could and it predictably failed but I can’t fault them for their attempt.
In the end, the zombies made it past the fence so Rick and Carl grabbed assault rifles and started mowing them down. It was pretty awesome and very cathartic for the viewer (and probably Rick and Carl). Best of all, their strategy actually worked! Despite dealing with a huge number of zombies, Rick and Carl were able to take them down by themselves.
In addition to this action and suspense we still got great character moments. Rick and Carl obviously bonded and gained a new understanding for each other. Maggie proved herself to be a great daughter and wife. Oh, and Hershel proved himself to be the freakin’ man. His hope in the face of hopelessness and refusal to give up was inspiring and great to watch thanks to an incredible acting performance by Scott Wilson.
I know that, for various reasons, every episode can’t be like this one. You need your setup and you need your downtime. But this time we got a hell of a payoff.
Other Thoughts:
I’m no medical scientician so I have no grounds to say whether or not the sickies were too far gone for medicine to help. But I did wonder about it.
Hershel made an old man joke about having spaghetti Tuesday every Wednesday. That got me thinking. I wonder if they know the date and/or what day of the week it is? Do you think at some point they realized they didn’t know and just decided “Today is April the 1st” or something?
I was glad to see Rick come out with the truth to Maggie right away. I was also glad to see Maggie agree with the decision even if it was somewhat reluctantly. I would’ve loved to have seen the conversation regarding Carol between Rick and Hershel.
I questioned Hershel treating all the sickies like children even though they’re adults and understand the truth. But then his speech to Rick about losing hope killing faster than a germ made me understand. I should've never doubted Hershel!
Maggie made the right decision to shoot the zombie doctor and risk hitting the breathing bag (or whatever it’s called). I can understand Hershel being in a panic and not thinking clearly but he was in real danger of dying. If Hershel dies Glen dies too because who else is going to save Glen? So, really, shooting the zombie and hoping you don’t hit the bag was the only chance to save either of them.
I would make fun of the show for having the illness only kill off secondary characters but this is a show that regularly kills off the regular cast so it was almost refreshing.
I wonder how fast Rick and Carl went about repairing the fence after mowing down the zombie horde? Is the fence still down with random walkers wondering in?
I felt that Carl and Rick sharing a pea pod was a bit on the nose.
I’m surprised the Governor is back already. I figured it’d be a long time before we see him again. I wouldn’t have minded not seeing him until next season.
Newer Post Older Post Home
Posted by Dr. Bitz at 7:05 PM