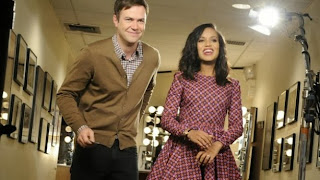 I'm not sure if this was the best episode of the season so far, but it was easily the most consistent, with almost all of the sketches landing on some level, flawed at times and humorous at others, all in the same sketch. Nothing was brilliant, but nothing was terrible either.

And most of the credit for that goes to Kerry Washington, who was a fantastic host. She ended up appearing in nearly every sketch to varying degrees, and did a lot to elevate some of the lesser material. Having not watched Scandal, I'm not terribly familiar with Washington's work (I know her mainly from her minor role in the Fantastic Four films and Django Unchained), but based on this episode, I'd be happy to see her back hosting again any time (or on a sitcom someday).

Other Thoughts
So, that cold open: hilarious, in a "it's funny cuz it's true, and it's sad that it's true" kind of way, and it's nice to see the show acknowledge the problem it has with diversity (at least we know THEY know it's a problem). Of course, it becomes a lot less funny if the show doesn't actually do something about it. I don't expect the immediate hiring of new, more diverse cast members, but the next time the show needs to fill out its ranks, it better not come back with another cadre of bland, eerily similar white dudes. Because mocking your lack of diversity is fine if you intend to address it; mocking it then doing nothing is just wrong.

As pleased as I was to see Nasim Pedrad featured in the first post-monologue sketch, I'm not quite sure what that sketch was all about or why it led off the night. It was indicative of the night, in a lot of ways: a flawed or confusing premise with a strong performance or enough funny bits sprinkled throughout to keep it from being a total disaster. I guess, in that regard, it makes sense that it led off the night.

We continue to play this season's game of "recurring sketches I'd forgotten about" with How's He Doing? and the Booker T. Washington school one reappearing. The former, somewhat sadly, last appeared when Maya Rudolph hosted the show, and was consistently funny throughout. The later is one of the rare recurring sketches I neither love nor hate. It usually contains at least a few funny bits, but I don't find Jay Pharaoh's "attention teachers and students" schtick as funny as he apparently does.

That pre-filmed music video "My Girl" was apparently a spoof on the latest music video internet sensation du jour (a la "Gangnam Style" or that insipid Thursday song), "What Does the Fox Say?", something with which I wasn't familiar when I watched the sketch but, assuming it was a direct parody of something, sought out afterwards. The original is pretty insane in its own right, but this was still pretty funny and really well executed - Kerry Washington, in particular, shined once again.

Okay, I seriously lost it when Jay Pharaoh came out as Shaquille O'Neal. I don't know how he managed to get his slightly-cross eyed look down so well, but he did. Just the sight of him made me laugh.

The cartoon game show sketch was pretty weak as a game show parody, but I did get a kick out of the plotline running throughout, specifically Aidy Bryant's reaction to it. So another sketch saved largely on the strength of Aidy Bryant's performance.

Least Favorite Sketch: The Miss Universe pageant, mainly because, even on the occasions it did make me laugh, I wasn't sure if I should be laughing...

Favorite Sketch: Again, while nothing was terrible, nothing really stood out at me. I guess I'd say the "My Girl" video, but in terms of actual live sketches, the cartoon game show stick in my memory despite its flaws.

Tammy: "Help, I have too many boners. What should I do? Sincerely, Mr. Boners.”
Heshy: Mr. Boners, I don’t know what boners are, but believe in yourself!

Tammy: I looked, Heshy. Respect my ability to assess a bucket.