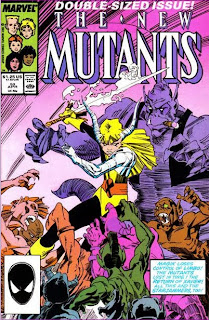 In a Nutshell
The New Mutants reunite and defeat Magus.

Plot
Alone in Limbo, Illyana fights off a horde of demons infected by the transmode virus, led by a similarly-infected S'ym. Desperate to stop them, she plunges her Soulsword into the crowd, thinking of Professor X as she hopes to disrupt Limbo itself. Later, on an alien world, the Starjammers barter for supplies, when Charles Xavier suddenly detects a familiar mental presence. He tracks it to a slave auction, where a captured Illyana is being sold off. He claims her as his own, blowing the Starjammers cover and forcing them to quickly retreat to their ship. Illyana is relieved to see Xavier again, and fills him in on all that has happened in his absence. Realizing he can read her mind for the first time, Xavier theorizes that Illyana's attempts to destroy limbo instead purged her of her demonic side while casting her out, her mutant power sending her to the last person she was thinking of. Hoping to reunite the New Mutants, Xavier and Illyana return to Limbo, where Illyana is forced to reclaim her demonic side in order to hold S'ym at bay and keep Limbo under her control. 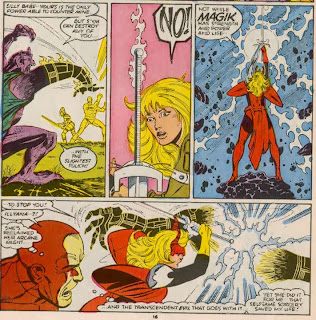 With Xavier telepathically guiding her power, Illyana proceeds to retrieve her time-lost teammates and return them to the Starjammer. However, they arrive just as Magus attacks the Starjammer. With Xavier directing them, the New Mutants work together to repel Magus' attack. Though the battle seems hopeless in the face of Magus' awesome power, Doug and Warlock merge together and are able to access Magus' genetic code, rewriting it and reducing Magus to infancy, nullifying his power and ending his threat, with the hope that when he grows up, he'll have an adult Warlock and the New Mutants to keep him in line. A relieved Warlock expresses gratitude to Xavier for his tutelage, declaring that Xavier is his true father in spirit.

Firsts and Other Notables
Professor X appears in this issue, his first appearance since X-Men #203, and helps the New Mutants defeat Magus. He'll stick around for next issue before vanishing into space with the Starjammers again (all of whom guest star in this issue as well).

The Magus is defeated when Doug and Warlock, working together, essentially rewrite his genetic code to revert him to a state of infancy. 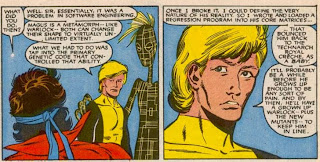 It's revealed that S'ym, Illyana's chief demonic servant, as been infected with the transmode virus, empowering him to attempt to usurp control of Limbo from Illyana. This in turn leads to Illyana being forced to leave her Soulsword in Limbo in order to ward off S'ym's attacks, establishing a new status quo in which any uses of the sword or her magic creates an opportunity for S'ym to gain more ground in Limbo. This struggle over Limbo and S'ym's infection will play a significant role in the issues ahead, both in New Mutants and the other X-books.

This is Jackson Guice's final issue as the book's regular penciller. The next four issues will feature fill-in art before Bret Blevins, who penciled last issue, comes aboard as the book's new regular artist.

A Work in Progress
Forced to use her Soulsword to purge herself of the transmode virus, Illyana's armor responds by spreading to her leg as well, prompting her to wonder what will happen when it covers her entire body.

Claremont has apparently realized that Cyclop's son is still nameless, as Illyana makes a joke about it in this issue, also informing Corsair of the birth of his grandson.

Similarly, Xavier learns of the Mutant Massacre in this issue, and is horrified by the memories of it he sees in Illyana's mind.

Xavier determines, based on Illyana's memories, that the Marauders are after world domination, though nothing that we've seen of their (admittedly hazy) motivations suggests as much.

When Illyana is briefly separated from her sorcerous abilities, Xavier is able to read her mind.

I Love the 80s
The scenes of Xavier discovering Illyana at an alien slave market are filled with cameos, from the bar and Corsair's contact resembling Grim Jack and the central bar of his series, Munden, to the Micronauts (whose series was formerly drawn by Jackson Guice) and Herculoids appearing at the bar, to Xavier wearing a flight suit with a Nostromo patch (the ship from Alien) on it.

Illyana suffers from some pretty blatant sexualization in this issue, first being essentially orgasmed into submission by the master of the slave auction, and later, when she wakes up in her underwear aboard the Starjammer. 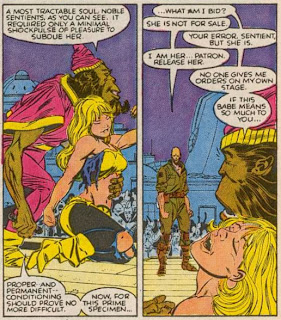 Illyana hopes the Mets (with whom Corsair is unfamiliar) go all the way and win the World Series - they did, in fact, win the 1986 World Series (which was the series of the infamous Bill Buckner "ball between the legs" error in Game 6, the one Red Sox fans wouldn't shut up about until they started winning World Series on a regular basis). 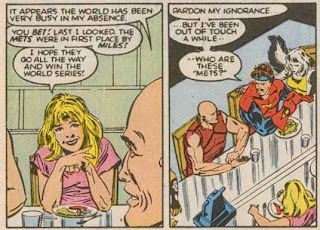 Teebore's Take
Even in 1987, comic book series rarely made as big a deal out of reaching an issue number divisible by twenty-five as they do nowadays, but nonetheless, Claremont makes the fiftieth issue of New Mutants something of a celebration of the series thus far (in what, unknownst to anyone at the time, marks the ultimate halfway point of the book). In the short term, this issue sees the New Mutants, scattered across time for three issues now, reunited with each other. In the longer term, it concludes the Magus storyline, defeating a villain that has plagued the characters (albeit mostly in the background) since issue #18. For the future, it sets up a new status quo for Illyana and Limbo: anytime she uses magic or her Soulsword, she must balance that use with the cost of her increasing lack of control over Limbo. And to add one last touch of retrospective to the issue, it features the (temporary) return of Professor X to the book.

It's been over fifteen issues since we last saw Xavier in the pages of this title, and he remains the consummate teacher, always leading his students to the right conclusion instead of telling them what it is, always pushing them to reach beyond their limits but willing to step in and help when necessary (in fact, Xavier comes across as more of a teacher in this one issue than he arguably ever did in his previous thirty-odd issues of the series). Despite his presence, Claremont is careful to keep the focus on the New Mutants, and each is given an opportunity to make a significant contribution to the battle with Magus, even as Warlock finally owns up to his responsibilities and faces his father while the most unlikeliest hero of all, Doug, once again saving the day. It's a great bit of action storytelling on Claremont's part, but the end result is also a reflection of how far the characters have come in fifty issues, reunited once more with their mentor, in their greatest battle yet. All told, not bad for a fiftieth issue.

Next Issue
Tomorrow, Cyclops and Master Mold exchange blasts in X-Factor #14. Next week, Storm fights some old people in Uncanny X-Men #216 and Professor X gets caught up on current events in New Mutants #51.
Newer Post Older Post Home
Posted by Austin Gorton at 8:00 AM