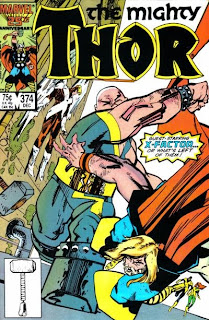 In a Nutshell
Thor rescues Angel from the Marauders.

Plot
Issue #373: Thor returns to Earth after a lengthy absence and gets back into the life of Sigurd Jarlsson, his secret identity. Learning from the frogs in Central Park about the massacre going on underneath the streets, he transforms into Thor and enters the Morlock Tunnels. Overhearing Angel's screams, he discovers the mutant being tortured by the Marauders, and fights them off. Issue #374: Thor once again fends off the returning Marauders as he endeavors to take the badly injured Angel to the surface for medical attention. Elsewhere in the tunnels, Blockbuster, chafing at being twice beaten by Thor, vows to kill him. Nearby, Thor encounters Artie, and offers to bring him to the surface as well, but just then Blockbuster attacks, breaking Thor's arm. 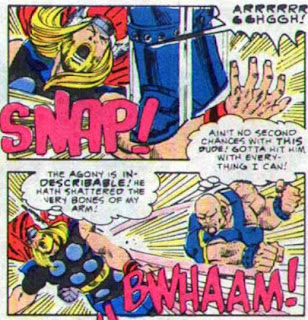 Jarred into consciousness, Angel does his best to distract Blockbuster, despite his injuries, giving Thor a chance to hurl his hammer at Blockbuster, killing him. Thor, Angel and Artie then continue their journey through the tunnels until they run into Marvel Girl and Cyclops, whom Thor recognizes as former X-Men. He turns Angel and Artie over to their care as Cyclops fashions a sling for Thor's broken arm. Thor tells Cyclops to leave the tunnels soon, for he intends to clear them of their dead. He then triggers a blast with his hammer that scours the tunnels clean, giving the dead some measure of a funeral.

Firsts and Other Notables
Blockbuster becomes the last Marauder to die (in this storyline), as Thor hurls his hammer at him, crushing his skull, in issue #374. 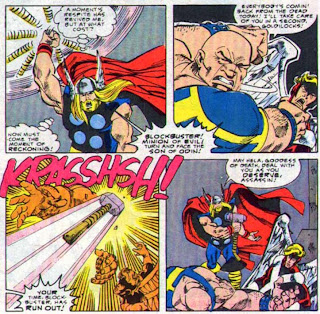 At this point in time Thor lives on Earth as Sigurd Jarlsson, a construction worker whose identity he assumes by donning a Clark Kent-ish pair of glasses and tying his hair into a ponytail. In issue #373, he is unknowingly cursed by Hela, and in issue #374, he learns of the curse: as a result of actions Thor took in issues #360-362 to rescue mortal souls Hela had stolen, she has made his bones brittle and unable to heal (which is how Blockbuster is able to break his arm), yet also made him unable to die, so that he will fear going into combat and live the remainder of his life in agony. The curse will remain with Thor for the remainder of Simonson's run on the title (which will end with issue #382), and lead to him donning a bitchin' suit of armor to hold together his broken bones.

As a result of being taunted about the curse by Hela, Thor triggers the energy blast which scours the Morlock Tunnels clean (as seen in most of the other "Mutant Massacre" tie-ins) sooner than he anticipated - he did in fact warn Cyclops to leave the tunnels as soon as possible, telling him he would take care of the bodies (not that this would have helped other people in the tunnels at the time that Thor didn't warn, like Wolverine). 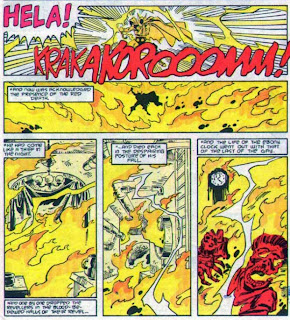 X-Factor penciller Walt Simonson, who began his acclaimed run as writer and artist on Thor with issue #337, turned over artistic duties on the book as of issue #368 to Sal Buscema, who provides the art for these issues as well as the remainder of Simonson's run as writer on the book (save issue #380, which Simonson also draws). 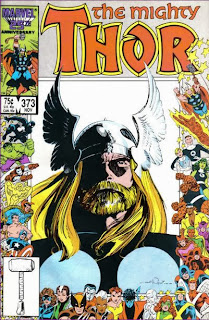 The Chronology Corner
These issues occur between X-Factor #10 and #11, after Power Pack #27 and concurrently with Uncanny X-Men #212 and New Mutants #46. Angel, last seen pinned to a wall by the Marauders, his wings broken, is recused by Thor and turned over to Marvel Girl and Cyclops, who are seen returning to their headquarters with him in X-Factor #11. 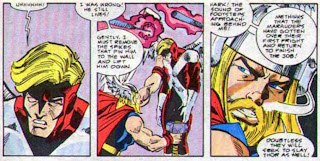 A Work in Progress
Thor learns of the massacre from the frogs he befriended while transformed into a frog, in issues #364-365 of his series. He also met the Morlock Piper during that storyline.

Thor recognizes Cyclops and Marvel Girl from when the Avengers fought the X-Men in X-Men #9. 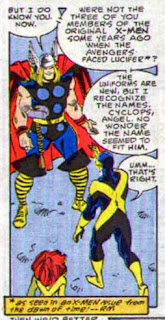 Teebore's Take
Like Power Pack #27, these two issues of Thor, from the perspective of "Mutant Massacre", are chiefly concerned with bridging the gap between X-Factor #10 and #11, in this case, specifically the fate of Angel,  though the "Viking funeral" Thor triggers shows up in other crossover titles as well. And like Power Pack, Thor's involvement in the crossover largely stems from the fact that the writer of his book also draws X-Factor (and his married to that series' writer), as Thor lacks even Power Pack's prior recent involvement with the X-Men and Morlocks (Thor's point of reference for Cyclops and Marvel Girl goes alllllllll the way back to X-Men #9). Unlike Power Pack, however, Thor's involvement doesn't automatically devalue the threat of the Marauders - he doesn't exactly struggle to defeat to them, but he is a god and a seasoned superhero, after all, and watching him dispatch Blockbuster after what he helped do to Angel, instead of making the Marauders look like chumps, ends up being extremely cathartic; along with Colossus killing Riptide and Jean smashing Prism, it stands as one of the few cathartic moments of the entire storyline.

Next Issue
Tomorrow, Mephisto rampages across several teams in the Mephisto Vs. limited series, and next week, we check in with Dazzler in Uncanny X-Men #214 and continue time traveling in New Mutants #49.
Newer Post Older Post Home
Posted by Austin Gorton at 11:00 AM