TV and movies make a big deal out of most of the major holidays, but Halloween, arguably, gets the biggest inflation in scope from "real life" to "fiction". Once you've outgrown trick-or-treating, there isn't a whole lot to the day. I celebrate it by going to a party (in costume, of course), listening to appropriately-themed music in the weeks leading up to the holiday, and watching suspense/horror/Halloween-themed movies and TV shows.

Yet while Christmas remains my favorite real world holiday, Halloween is probably my favorite when it comes to fictions about the holiday itself, as the stories, imagery and sensations on display in fiction are so much larger and impactful than they are in real life. And as much as there are some Christmas movies I love, and some fantastic Christmas-themed episodes of favorite TV shows, I have much more fun plowing through the fiction of Halloween every October than I do that of Christmas in December (in part because there's plenty more real world stuff to do associated with Christmas).

Anyways, here's my thoughts on some Halloween-themed TV shows I watched last week. 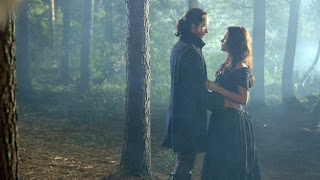 So the lost colony of Roanoke is lost because the Horseman of Pestilence (aka Conquest) infected it with a plague then sent it forward in time so Pestilence could be unleashed on the modern world, but the colony was protected by the ghost of Virgina Dare, who gave the water healing properties, at least until one of the colonists was lured out by the Horseman and pierced the time barrier, entering the modern world and bringing the plague along with him?

Goddamn, I love this show.

Oh, and this is kind of sad: Only this episode did I catch that Orlando Jones' captain is named Irving. As in, Washington Irving, the author of the "The Legend of Sleepy Hollow". So yeah, that character is clearly more involved with things than he seems (I'd bet he set it up so that when Morales called Oxford, Crane got appropriately vetted).


Brooklyn Nine-Nine: Halloween
This might be my favorite episode of the show yet. Like the previous episode, it made good use of the entire ensemble, and it featured a "this is how things really happened" reveal, which is one of my favorite plot devices (it's why I like heist movies so much). There was a brief period where I was worried that the show actually was going to have Peralta lose the bet; all the better that he won it, but in such a way that Holt won, too. 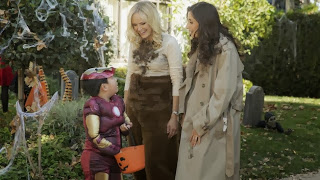 Having Diane on hand, in a ridiculously-detailed costume, but not the center of one of the episode's two storylines, was a really smart move. It showed how she fits in amongst the characters without being an antagonist, and the fact that she was willing to put so much effort into a Halloween costume was a great way to show that she isn't isn't all uptight bitchiness while staying true to her character.

That said, I was a little bummed that she, Warren and Hilary all fell for the Fox's obvious attempts to manipulate them. Warren, fine; he was doped up on meds. But I'd have thought the others would be too smart.

Also, Warren's costume was fantastic. He's such an odd kid, and I love it.


Top Chef: Lea Michelle's Halloween Party
Usually, it bugs the crap out me when Top Chef does one of these "we're going to do a challenge themed around a holiday that will be occurring when the episode airs, but is actually several months away when we're filming, so it's all terribly forced" episodes, but this one wasn't too bad - probably because the setting, with all the Mardi Gras/costume stuff associated with New Orleans, helped keep it from feeling too forced (in other words, you could easily do a "costume ball" challenge in New Orleans independent of Halloween).

Catering challenges on the show also bug me, but I acknowledge them as a necessary evil. The cheftestants never seem to get too excited about them (which is why, I think, we didn't see much from the season's early frontrunners in this episode: they're good enough to skate by in a challenge like this at this point in the season, but don't care enough to put the effort into winning it), but the whole "work in pairs" bit added a wrinkle that made it more fun to watch (even while it muddied the specific goals of the challenge - it was never terribly clear what the ultimate goal of this challenge was).

As celebrity chefs go, Lea Michelle was pretty good. It was mentioned several times that she's a superfan of the show, and she proved it, saying all the usual buzz words while trying the food and intelligently (and specifically) critiquing the results at judges' table (of course, it's possible they just edited her kindly). That said, I'm impressed the show resisted the urge to have her sing at some point.

Tom was apparently dressed as Jay Gatsby. I figured he was Orville Redenbacher. Also, Tom, Douchenozzle That Is Called Andy Cohen: it's "old sport", not "sport".

The elimination was predictable, one of those "matter of time" eliminations that make perfect sense.

That said, the only reason I can think that any contestant on this show would ever do risotto is because they've never seen an episode of the show before coming on themselves.

Stephanie is quickly becoming a favorite. Her comment about hanging out with Lea Michelle and it totally not being weird cracked me up.

As before, I feel bad for the poor production assistants who had to wrap everything in foil, presumably in only a few hours.I hope all that got recycled.


Saturday Night Live Halloween Special
Maybe it's just because this is airing only a relative few episodes into the new season, or because this particular special seemed especially heavy on content from the last five or six years, but man, did seeing guys like Bill Hader and Jason Sudeikis again remind me how much I've missed seeing them on the show.

Also, the Merryville Halloween sketch still cracks me the hell up.


Dracula: The Blood is the Life 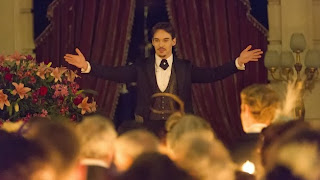 There's parts of this series' setup I like, even in the early goings - the somewhat novel idea of Dracula being the good guy (or, at least, the less bad guy), working with Van Helsing to bring down a centuries-spanning secret cabal of worse bad guys (I'm a sucker for secret cabal/conspiracy stuff), Renfield being a smooth Alfred-esque manservant instead of a slobbering lunatic, and Dracula being some kind of Tesla-esque alternate energy mogul so he can try and break the economic power the secret cabal derives from oil (ooh, topical!), but man, Jonathan Rhys Meyers' performance as Dracula, at least in the pilot, is really wooden and lifeless (puns intended). I think he's going for the kind of cool detached confidence that actors like Bela Lugosi have brought to the role, but the end result is pretty limp and uninspiring. There's enough here that I like (or am intrigued by) that I'll stick with the show a bit longer, but man, I really hope Dracula livens up along the way (okay, I'm done punning).


Quotable Quotes
Trophy Wife
Jackie: Can I give you money for this?
Kate: Oh, do you have money?
Jackie: Uh, no.
Kate: Then no.
Jackie: Okay, so we’re even.