How I Met Your Mother 9X08: The Lighthouse 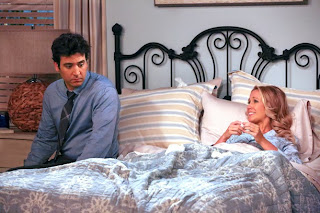 Other than the last five minutes, this was a pretty terrible episode. Centered around the asinine feud between Robin and Barney's mom (a plot line for which the best thing going for it is that it ended in this episode) and featuring far too many "whacky hijinks" in the Daphne/Marshall subplot (can Marshall get to Farhampton already?), the best part of this episode was the final five minutes, in which, for the first time since the premiere, we finally got to spend more time with Ted and the Mother.

And look, I'm glad we got those five minutes, but when I said I wanted the Mother back, I meant in a more substantial role (imagine, if you will, a version of this episode in which the Robin and Marshall storylines are reduced or jettisoned and the spine of the plot was a parallel narrative featuring Ted visiting the lighthouse with Cassie in the present and the Mother in the future, leading up to that proposal). If all we're going get out of the Mother this season is little five minute snippets like this, set in the future in order to fill out a punch list of significant events between her and Ted, while the rest of the season is devoted to an endless litany of cliche and asinine Robin/Barney pre-wedding A-plots, then it's going to be a long (and disappointing) season.

Other Thoughts
This episode soured for me almost immediately, as SagetTed's recap opening the show immediately retconned the origin of the Robin/Loretta feud. Originally, the issue was that Robin convinced Barney that he occasionally needs to stand by her instead of his family, leading Barney to broadly and stupidly tell his mother he'll never spend any time with her again because he has Robin now. This episode, Loretta is just mad that Robin won her blouse in poker.

I liked the idea of Marshall stopping at Ted's childhood home on his way to New York, but Harry Groener (whom I've enjoyed before, on this show and others) and his schtick dragged down that entire plotline.

Lily's advice to Ted wasn't bad so much as it was advice he's received from multiple people multiple times in the history of the show, and always refuted, thus he should have been largely numb to it by now.

Maybe I'm just not enough of an egg guy, but how much better than any other can one preparation of scrambled eggs be (that said, Robin "pre-scrambling" the eggs made me chuckle)?

Aside from the last few minutes, hands down my favorite part of the episode was Marshall putting on "500 Miles" as soon as he took control of the music. Almost worth the whole misbegotten road trip subplot just for that moment, and the kind of a moment a lesser show wouldn't have bothered with.

Also, the running tally of "things we know about Robin's mother" was classically HIMYM-y. I'm curious if the moments they flashed back to actually happened on the show, or were made up for this episode. And I would be slightly surprised if we didn't see Robin's mom in some capacity before the show ends.

There were a few touching moments in this episode: Barney hugging Robin when he learns she can't have kids, and Loretta putting aside the feud after learning the same (and learning Robin's mother won't be at the wedding).

Finally, "his best friend was a balloon" was pretty funny.