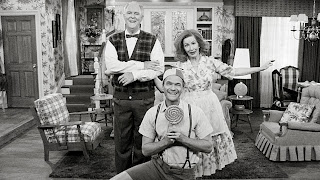 The whole "Barney wants his parents to get back together" plot was patently ridiculous, on multiple levels (even if the show did acknowledge it via Robin's insertion into Barney's musical dream), so the saving grace of this episode was Ted's feud with Billy Zabka. I'm a sucker for Ted-as-incompetent detective (he can't even detect sarcasm) and the feud played out much better than I'd feared when it was first introduced. Plus, the trials and tribulations of Billy Zabka were pretty funny (I especially loved that his mom booed him over the phone); it was a fairly unrealistic, broad bit (I also liked that everyone always had popcorn to throw, wherever he went), but it's less problematic when a peripheral character playing a caricature of himself goes broad than when the main cast does it.

Other Thoughts
Also on the bright side: it appears we've seen the last of Sherri Shepherd, meaning Marshall should be showing up at the inn soon, or at least hitting some different beats in his road trip story.

And next week's episode looks like another extended flashback (not that the preview couldn't just be showing us a five minute flashback in an episode otherwise set at the inn, of course), so that's (potentially) good.

Ted still hasn't solved the pineapple case, though I believe Bays and Thomas have said it will be resolved before the end of the series.

Another simple and rather obvious gag I nonetheless enjoyed: the snap-zooms to close-up of the suspects in Ted's mystery.

Nice to see Ben Vereen again (and, I'll admit, I completely forgot about him as a character, when his showing up as the officiant was probably obvious to anyone who did remember him the moment Ed Hermann died). Thankfully, he didn't get as sucked into the wacky hijinks as John Lithgow, who is capable of handling better material (though I did like his exasperated yet quizzical reading of the suicide note).

One of the upsides to the cast being so fractured this season (with Marshall on the road trip and Robin and Barney off making us wonder why they're getting married) is that we've seen Lily and Ted hanging out together more. Not that these interactions have amounted to a whole lot, but it's nonetheless been nice to see these two old friends just spending time together.

Ted: My calligraphy ink! I mean, the Gretzky photo!

Billy Zabka: Twenty-five years of getting crane-kicked in the nuts
Newer Post Older Post Home
Posted by Austin Gorton at 10:00 AM