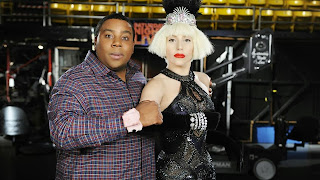 This was a pretty solid episode: a few sketches I liked less than others, but nothing completely awful or deeply flawed in conception, everything generally amusing on some level and quite a few sketches I genuinely enjoyed. In terms of Lady Gaga, I recall thinking, when she'd pop up in sketches during her various turns as a musical guest, that she'd make for a decent host. She passed my first test for any celebrity with an air of pretentiousness about them: the ability to display a sense of humor about themselves. Beyond that, while most of her sketch work played off her image to one extent or another, preventing her from disappearing into roles the way, say, Kerry Washington did, she acquitted herself well.

Other Thoughts
The cold open was fine (I especially liked the way it covered both Rob Ford and the 60 Minutes false story) but suffered from two things: A. Chris Farley is sadly not with us to play Rob Ford and B. Rob Ford is already pretty much a caricature, so it's hard to wring much more humor from him via satire.

I know it's low hanging fruit and all, but I never tire of the Kardashians being mocked.

Ditto the Prozac: Second Term Strength ad, which was a clever (and funnier) way of mocking the ongoing healthcare imbroglio outside the realm of a standard sketch.

The "Greatest Cover Songs" bit seemed like something built just to get to the "Express Yourself/Born This Way" gag (which I loved), but as "cram in celebrity impression" sketches though, these are usually more impressive just for the added difficulty of impersonating someone while singing. That said, I'd have liked to see more actually-covered songs and their accompanying cover singer, but I suppose the writers had to work with whomever they could get reasonable impressions for.

Another seemingly-short Weekend Update, but I enjoyed both of the guests. Mr. Senior's diatribe may very well have been inspired by my wife (whom I'm not entirely sure hasn't angrily run out of a department store, early Christmas decorations in hand), and Jebediah Atkinson, the snarky critic, was a pretty great sendup of the internet's ability to crap on everything, and was wonderfully played by Taran Killam. If not for the fact that he blew through a ton of material in this appearance, I wouldn't mind seeing him again (perhaps critiquing other media).

The back end of the night was filled with sketches that worked on some level even if I didn't love them outright: the short co-op sketch (I particularly enjoyed Kate McKinnon eating her brocoli baby), the broad child actors bit that went on a bit too long, and the stage parents sketch built around a single idea (that largely worked because we never saw the child in question).

The final sketch of the night was more wry and surprisingly-melancholy than outright funny (though some of Keenan's straight-man reminders of the future setting were pretty funny in a "so dumb they're funny" kind of way), but again, it was nice to see Lady Gaga willing to explore her image and have some fun with it.

Least Favorite Sketch: Probably the co-op meeting, mainly because it didn't go far enough and felt like a "it'd be funnier if you were a New Yorker" sketch, but it wasn't terrible or anything.

Favorite Sketch: I'm really reluctant to keep awarding this spot to a pre-recorded bit, but I have to single out the Blockbuster Video eulogy, simply because it's only a matter of time before the show has to do something similar for Barnes and Noble, and I need to laugh about it while I can...

(In terms of actual live sketches, the Kim/Kanye one takes the honor)

Kanye: Between the two of us, we’ve earned 19 Grammys, sold over 21 million albums, and won Best Male Artist at the NAACP Awards.
Kim: Yeah, we did it!

Mr. Senior: It’s 60 degrees outside and I already have to decide which black Christmas movie I want to see!

Jebediah Atkinson: Oh, was that too soon? Get over it, he’s on the five

Atkinson: And don’t get me started on that beard. What was her name, Mary Todd?

Aidy Bryant (on the Rose Zone): I don’t care about their backstories. I want to see women destroy other women.