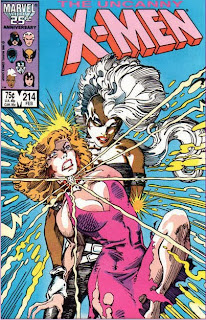 "With Malice Toward All"
February 1987

In a Nutshell
Dazzler joins the X-Men.

Plot
In Denver, Dazzler, performing at a concert as part of Lila Cheney's band, is goaded by Malice into taking the spotlight from Lila, exposing herself as a mutant in the process. After the concert, Lila chastises her, and Dazzler, fully possessed by Malice, quits the band. In New York, Storm, Rogue and Psylocke declare Cerebro damaged beyond their ability to repair it as Wolverine and Callisto spar in the Danger Room, when they receive a call from Lila, concerned about Dazzler. The X-Men track her to a nightclub in Dallas where she performs with abandon, making no secret of her mutant abilities. When she spots the X-Men, she attacks, and when the X-Men overpower her, Malice abandons Dazzler and takes control first of Wolverine and then Rogue. The possessed Rogue blasts out of the club, attacking the police gathered outside. 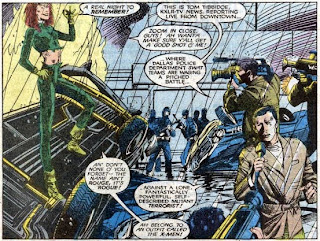 The X-Men attack Rogue, hoping to draw Malice out so Psylocke can attack her directly. When Dazzler manages to temporarily overpower Rogue's senses, Malice flees her body, but Psylocke is unable to prevent her from taking control of Storm. However, Malice is empowered by the suborned darkness in each of her victim's minds; as Storm long ago made peace with that side of herself, she is able to overpower Malice. Forcibly ripped from Storm's body, Malice flees, finding refuge in the body of a nearby police officer. As the X-Men leave the scene, once more painted as villains thanks to Malice, Storm tells Dazzler that she is too big a target for the Marauders, and that she will be safer amongst the X-Men. Though she does not want the life of a superhero, she accepts. From a distance, Malice watches them go, pleased with the distrust her actions have sown amongst the X-Men.

Firsts and Other Notables
Dazzler joins the X-Men in this issue, seven years exactly (per cover dates) after her first appearance in X-Men #130. She joins somewhat reluctantly, Storm telling her that, her cover with Lila blown by Malice, she is now a target for the Marauders, and will be safer with the X-Men than out on her own. 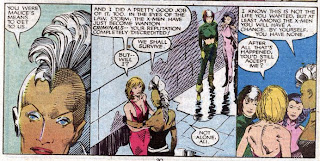 Barry Windsor-Smith pencils this issue, his fourth and final collaboration with Chris Claremont on this series. Unlike his previous issues, however, he only provides the pencils, and does not have any story, inking or coloring credits on the issue. The cover, meanwhile, is penciled by Art Adams, but inked by Windsor-Smith.

Cerebro, damaged by Sabretooth's attack last issue, is declared beyond the repair abilities of the present X-Men, effectively ending the era of the X-Men being alerted to a new mutant by Cerebro (though it's been ages since that's happened anyway) or having the ability to boost a telepath's range and/or track down a specific mutant, for the foreseeable future at least. 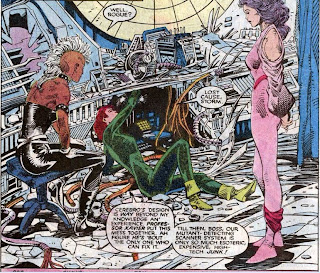 After Malice has been defeated, Wolverine suddenly attacks Storm, his senses erroneously telling him that she's been possessed again. This failure of his senses marks the beginning of a slow arc for Wolverine (one that carries him almost to the end of Claremont's tenure) that finds him at various times questioning his abilities, unable/unwilling to trust his senses and generally losing his edge. 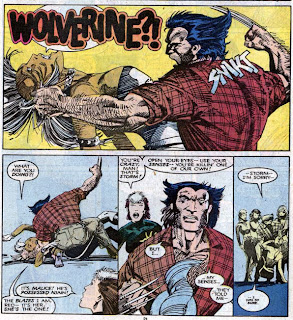 Lila Cheney's appearance in this issue marks her first appearance in Uncanny X-Men, though she's on a first-name basis with Wolverine at least. 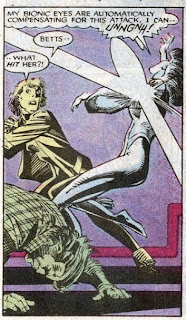 Dazzler mentions having an old score to settle with Rogue, a reference to Dazzler #22-24, when Rogue battled Dazzler prior to joining the X-Men. This enmity will pop up again during their time as fellow X-Men. 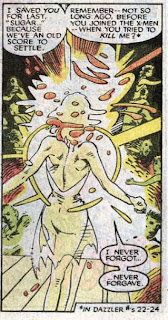 It's noted that Malice is an empath, which enables her to sneak past even strong psychic defenses. Claremontisms
In one of the more grating Claremontisms, Wolverine answers the phone by saying "'lo" instead of "hello". I like abbreviations and slang as much as the next writer, but who answers a phone like that? 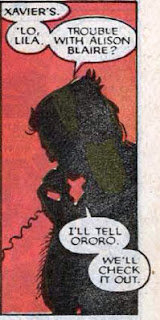 Dazzler is referred to as "Lightengale", which will become one of Claremont's preferred nicknames for the character.

The Best There is at What He Does
Callisto notes that Wolverine is not invulnerable, and both seem to agree that a knife to the throat would be sufficient to kill him. 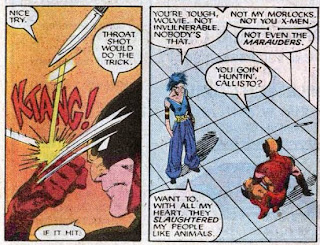 Human/Mutant Relations
The X-Men's reputation takes another hit, after a Malice-possessed Rogue attacks a group of cops, then proudly points out that she's one of the X-Men. 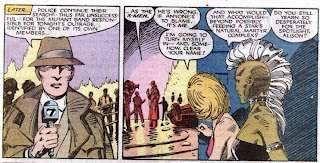 For Sale
There's another, different, Lazer Tag ad in this issue. 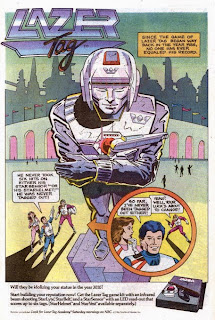 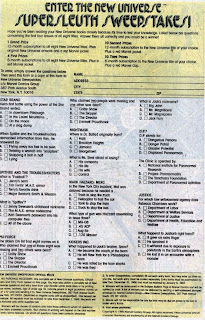 It's in the Mail
Letters in this issue discuss issue #200, and the upcoming X-Men vs. Avengers limited series, which follows up on Magneto's aborted trial, is teased.

Teebore's Take
"Mutant Massacre" formally ends with this issue (at least according to some trade collections of the story - the loose nature of the crossover makes it less clear exactly when the story ends; heck, you could argue it ended for the X-Men after issue #211), but in keeping with the somewhat fractured narrative of the story, there's no big climatic showdown between the X-Men and the Marauders. Rather, much as with last issue and Psylocke, this issue is chiefly concerned with establishing Dazzler as a member of the X-Men, using a single Marauder (last issue Sabretooth, this issue Malice) as the push to get the new member on the team.

There's not a whole lot else to this issue (the Windsor-Smith artwork is also quite nice), though Malice does serve one other purpose to the story, as she puts the finishing touche on the Marauders' defeat of the X-Men. Already, they've physically broken the X-Men, sidelining Colossus, Nightcrawler and Shadowcat, and shattered the X-Men's sense of security, driving them (we'll shortly see) from their home. In this issue, Malice goes even further, her ability enabling her to sow the seeds of distrust amongst the already-reeling and still-rebuilding team, thus affecting even those X-Men who escaped the massacre physically unharmed. In that regard, then, this is a worthy, albeit subtle and unexpectedly-quiet, conclusion to "Mutant Massacre", as the Marauders deliver one final blow to the X-Men, threatening their trust in each other.

Next Issue
Tomorrow, the other half of the New Mutants end up in their own alternate future in New Mutants #49, and Friday, Cyclops returns home in X-Factor #13. Next week, Storm and Wolverine try to visit an old acquaintance and meet some new enemies in Uncanny X-Men #215.
Newer Post Older Post Home
Posted by Austin Gorton at 11:00 AM