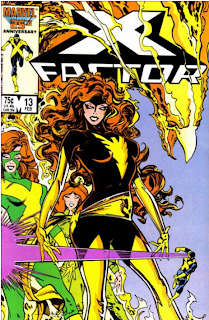 In a Nutshell
Cyclops returns home.

Plot
Scott leaves for Alaska, stopping on his way to the airport to visit Jean and Warren. Meanwhile, in the Alaskan waters, Master Mold, long-dormant, awakens. Back at the hospital, Hodge discusses the fraud charges being leveled at Warren. Hours later, Scott arrives in Alaska and returns to his house to find it for sale, the locks changed. Using his power to blast the locks, he goes inside to find the house empty and deserted. Offshore, Master Mold, sensing Scott's presence, uses an oil platform as raw material to rebuild himself. In Anchorage, Scott continues to search for Maddie, but finds no record of her, with the realtor, his grandparents' airline, even the police.

Breaking into the hospital, he finds no record of his son's birth, and checking old newspaper files, finds no record of the plane crash of which Maddie was the sole survivor. He returns to his empty house, wondering if he's having a nervous breakdown and if Phoenix made Maddie disappear, just like she once did Jean. Enraged, he blasts apart the house until he spots a rattle behind the radiator. Remembering his son would often throw it there, Scott takes this as proof that his family is real, that something rational yet terrible has happened to them, and he vows to find them. Unknownst to him, however, at the same time, the police find the body of a red-haired woman washed up on shore, just as Master Mold makes landfall, heading for Scott.

Firsts and Other Notables
Master Mold, the giant Sentinel who makes other, smaller, Sentinels, returns in this issue. We last saw him way back in X-Men #16, but between that issue and this one, Master Mold appeared in Hulk Annual #7 (written by Roger Stern and drawn by John Byrne, guest starring Angel and Iceman - the issue was circa their time in the Champions), in which it's revealed that this Master Mold has been programmed with the brain engrams of Stephen Lang, the head of Project: Armageddon, whom the X-Men battled in issues #98-100. The annual ultimately ends with Master Mold crashing to Earth and landing in the Bering Strait, where we find him when he awakens in this issue. 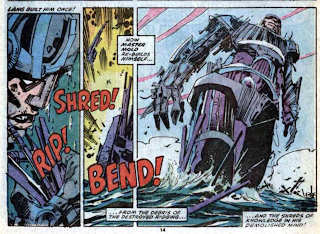 Detecting Cyclops' presence in Alaska after he awakens, Master Mold notes that Cyclops is one the Twelve, a group of strong and pivotal mutants. This kicks off the long-running Twelve subplot, which we'll learn more about next issue, then will largely lie dormant until it becomes the centerpiece of a line-wide crossover in 1999-2000. Back in the day, I was completely captivated by the idea of the Twelve, and was desperate for the story to get resolved. When it did, in a manner that largely ignored all the teases setup next issue, it was more or less the final nail in the coffin of my long-time childish, naive belief that anyone at Marvel was keeping track of this stuff and making sure all the stories by the various creators sensibly fit into some kind of grand X-Men narrative. 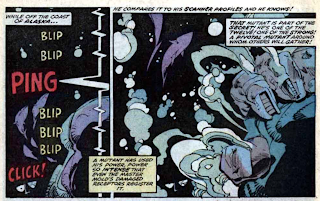 On a personal note, this was the first X-Factor back issue I ever purchased, bought at the same time as Uncanny X-Men #199 (apparently, Shinders was having a sale on Phoenix-related issues that day...).

A Work in Progress
Simonson now draws Hank's hair looking normally, instead of the shocked upright look that Guice often gave him. 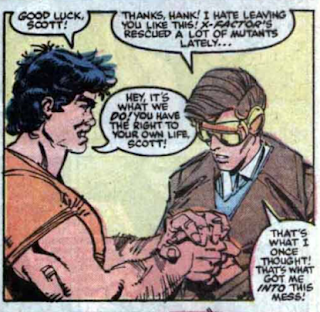 The picture Scott has of Jean is the one he received from Mastermind-disguised-as-a-priest in X-Men #174. 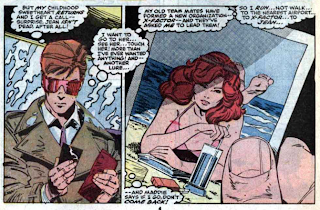 Confronted with a subpoena to appear before a judge regarding fraud charges, Warren notes that no matter what he says or does, X-Factor's cover will be blown, and considering that he's amended his will to leave everything to X-Factor, he muses that at this point, things would be better if he was just dead. 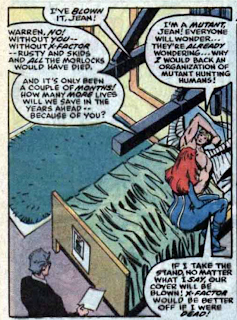 When Scott arrives at his Alaskan home, he discovers it completely empty, just like the house of Sara Grey, Jean's sister, before it was firebombed.

He also learns that his grandparents have sold their airline and left on a world cruise.

Boom-Boom arrives at the X-Factor complex, and immediately makes a bitchy comment about the Morlock Ape. 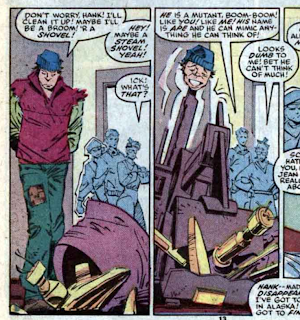 Scott visits the local hospital in Anchorage, yet finds no evidence of his son's birth, which makes sense, because his son was born in New York, at the X-Mansion.

I Love the 80s
Learning that his house is for sale, Scott confronts the realtor, and when he gets irate, she activates a silent alarm to alert the police. Which begs the question: why does a realty office have a silent alarm? 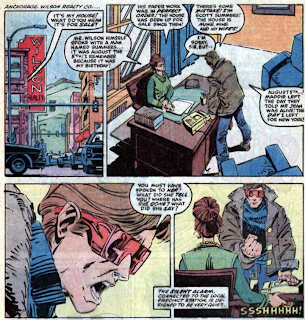 Master Mold is able to connect to one computer, and then from that computer to other computers, as though using some kind of interconnecting computer network, an "internet", if you will...

Scott, meanwhile, is forced to search for any record of Maddie on old newspaper microfiche.

Like a Phoenix, From the Ashes
Questioning his sanity, Scott begins to wonder if Phoenix did something to Maddie, and hallucinates Maddie, Jean and Phoenix as one. 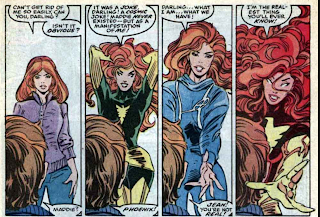 Young Love
Spying Warren and Jean together at the hospital, Scott leaves without saying goodbye, but when Jean realizes he was there and left without saying anything, she rushes out and kisses him goodbye. 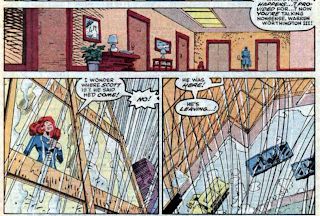 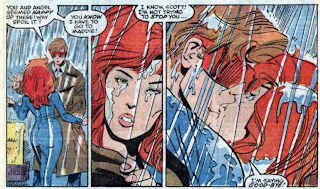 Teebore's Take
The Cyclops Rehabilitation Tour begins in earnest this issue, as Scott returns to Alaska and discovers Maddie and his (still unnamed) son gone, all traces of their existence seemingly wiped clean. This leads, as you'd expect, to an awful lot of angst (fists are clenched tightly in this one), and the whole thing is a bit maudlin, though certainly in fitting with the more soap operatic tone Simonson has struck with the title (and the other Simonson does an effective job of injecting scenes like Scott looking at microfiche or speaking to a realtor with a fair amount of energy). The revelation that Scott's family has gone missing, with the implication that someone or something nefarious is behind it, is also a bit of a cop out. It changes the story from being about Cyclops going home and owning up to the mistakes he made in leaving his family to one about how some kind of external force is keeping him away from his family.

Thus, the narrative has shifted, as now Cyclops' principal concern is finding his family rather than making amends. As the former was entirely his fault, the later is that of someone else, and thus, Simonson has put more distance between her Cyclops and the one who abandoned his family to go off and play with his friends (ie that guy was tool, this one just wants to find his family). It's a subtle shift in the narrative, but arguably a necessary one, as there's no denying that scenes of Cyclops despairing over his lost family, questioning his sanity, and fighting giant robots is far more exciting (and typical of a comic book) than scenes of him quietly working out his differences with Maddie.