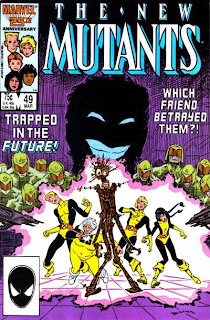 In a Nutshell
The other half of the team finds themselves in their own dystopic future.

Plot
In a future New York City, Doug and Warlock evade a pair of Arbitrators, the city's police force, before scrawling a message in support of humans on the side of a building. Elsewhere, Dani visits Heroes Plaza, a memorial to the deceased X-Men and New Mutants, before leaving with Sam on a mission to retrieve food and medical supplies for the city's disenfranchised human population. Dani and Sam's actions brings them to the attention of an elderly Katie Power, even as the Chief Arbitrator is similarly made aware of their presence. Meanwhile, in downtown, the New Mutants distribute the supplies to the human population as Katie introduces them to her own group of young mutants, whom she's trained to fight in defense of humans. Just then, the gathering is attacked by Arbitrators, and the New Mutants, along with Katie, are captured.

In the present, Magneto awakens from a dream and once again ponders an alliance with the Hellfire Club. Back in the future, the captured New Mutants come face-to-face with the Chief Arbitrator and his lady, who turn out to be Roberto and Amara. He explains how, years ago, a terrible war broke out, and only an alliance between Xavier's school and the Hellfire Club prevented mutantkind from being exterminated. After mutants emerged victorious, they showed mercy to the remaining humans and allowed them to live on their own, albeit in a different part of the city, and Roberto insists any squalor found there is by the humans' own choice, determined as they are to blame mutants for their misery. Just then, Warlock, who merged with Doug when he was captured, manages to escape and free his teammates, but everyone except Katie is quickly recaptured. Dani tells Roberto that they nevertheless intend to fight his regime with all their power, to which Roberto replies that he is simply going to have his telepaths rewrite their minds so that they believe this society is the right one.

Firsts and Other Notables
Future regular New Mutants penciller Bret Blevins fills-in on this issue, though his work on this issue isn't quite as exaggeratedly-cartoony as his later work on the series.

Magneto has a dream of his childhood, one the first times his experiences in the Holocaust are depicted this frankly. Following the dream, he is shown pondering the proposed alliance with the Hellfire Club, fearing that no matter what he chooses, mutants are doomed. 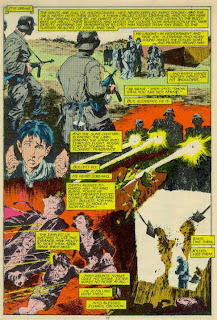 The time-lost New Mutants are befriended by an elderly Katie Power (the youngest Power), who has somehow acquired all her siblings' abilities and leads the resistance against the pro-mutant regime.

A Work in Progress
One of Katie Power's young trainees is named Archangel, no relation to the future X-Factor character by that name. 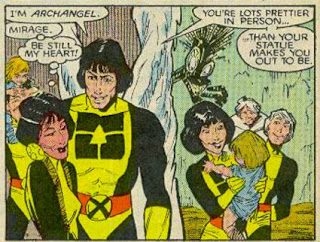 Doug and Warlock merge once again, and are once again referred to as "Douglock" in their combined state. 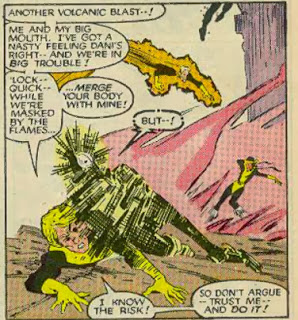 Doug's having been dragged out his bed by Sam to help the team communicate with Warlock in issue #21 is referenced by the adult Roberto, though Doug presumably had more choice in the matter than Roberto's suggests (even after learning the truth about Xavier's school, he still didn't have to join).

I Love the 80s
Dani notes that it may be a "girly"  dream, but she'd always hoped the New Mutants would all live to happily ever after.

Teebore's Take
This issue continues the New Mutants' jaunt into potential futures, dropping the other half of the team (Dani, Sam, Doug and Warlock) into a dystopic future of their own. But where this issue improves on the last one is in the nature of its future. Where the previous one was a lukewarm rehashing of "Days of Future Past", this future is something relatively unique in the annals of the X-Men: a future where mutants, rather than humans, are on the ones on top doing the oppressing. Even in the fifty-plus years of the franchise, with all its myriad alternate futures and dimensions, a world where the mutants ascend and put down the humans remains something of a novelty (though it's certainly not unique to this issue).

Even beyond the idea that reading a story set in that kind of future is more exciting than a "Days" rehash, there's additional thematic resonance in this issue that helps elevate it above the previous one. A world where the New Mutants must fight to protect humans against mutants is a strong reminder that Professor Xavier's dream isn't about mutant domination: it's about peaceful coexistence, which means neither species is on top. That the dominance of mutants in this timeline came about in part due to an alliance between the X-Men and the Hellfire Club (an alliance the present day Magneto is currently contemplating) adds further resonance to the story, helping connect it to present day events and adding to the feel that this issue is more than just a one-off jaunt into a routine dystopic future.

Next Issue
Tomorrow, Cyclops flails around Alaska in X-Factor #13. Next week, Storm and Wolverine head upstate in Uncanny X-Men #215, and the band gets back together in New Mutants #50.
Newer Post Older Post Home
Posted by Austin Gorton at 12:00 PM