The Simpsons: Four Regrettings and a Funeral 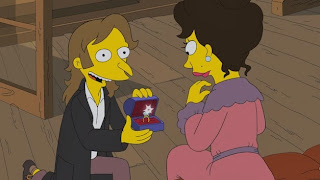 Look, you can either be structurally clever, or really funny (or, ideally, both). This episode tried to do both and succeed at neither.

In case you're wondering, Fox was supposed to air "Bart the Lover" in the 6:30 slot, in remembrance of Marcia Wallace, but apparently had issues getting the episode back from syndication, so they aired "The Ned-liest Catch" instead, making Bart's sad chalkboard message that opened "Four Regrettings and a Funeral" the best tribute of the night.


Once Upon a Time: Nasty Habits
With this episode, Neal arrives in Neverland, and in doing so, I think I realized that he's my favorite character on the show. He combines Emma's pragmatism and real-world cleverness (like never breaking in someplace without knowing how to get out) with a knowledge of magic and the rules of Fairy Tale Land, meaning he's effective in either situation, something which isn't really true of any of the other characters.

That said, as much as I can't blame him for it, Neal not trusting his dad and rushing off on his own was irritating, simply because it pretty much made the whole episode, plot-wise, a waste of time: everyone is back where they started, which is one of the more maddening tools in the genre toolbox, especially on TV shows trying to artificially draw out their story.

I liked the quiet revelation that Pan and Rumplestiltskin were childhood friends, which could develop into something interesting, especially since, for all its problems, the show usually does right by Rumple.

Also appreciated making Pan the Pier Piper of Hamlin, if only because it introduces that character into the shows' universe, a character I have a small amount of affection for thanks to having attended Hamline University, where our mascot was the Piper (or, as I often liked to say, a character who lures away children then promises to return them safely after he's been paid enough money aka the most apt mascot for a private college ever). 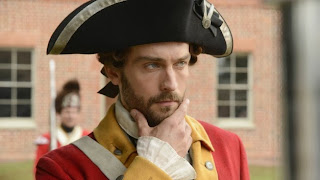 This episode wasn't quite as over-the-top crazy as some of the previous ones (though still plenty crazy), but it did give us some insight into Crane's character and how he came to be a spy fighting against his countrymen as a soldier in George Washington's secret war against the forces of the apocalypse (see, still crazy), something which, at this point, the show needed to do.

That said, it kind of biffed the landing, as John Noble shows up at the last minute to save Crane, with no explanation for his change of heart nor any explanation for why all the reasons Crane laid out in favor of killing himself were suddenly moot. I mean, *we* know Crane isn't going to die because he's the co-lead of a show that is already renewed for a second season, but the episode needs a better explanation for keeping him around than that, especially after it laid out so compelling a case for letting Crane die in order to stop the Horseman.

Whether he's good or bad, after this episode, Captain Irving has to be in the know, right? I mean, there's no reason that somebody who doesn't know more about what's going on would listen to Abby, then actually do what she wants. That said, I'm glad Abby did come clean with Irving about her vision instead of going rogue or lying to him. As much as I doubt Irving would listen to her if he wasn't secretly more involved somehow, it was nonetheless a refreshing bit of honesty and straightforwardness from a genre character.

Now that John Noble has eaten Crane's sins, is he connected to the Horseman, as Crane was, or did he merely sever that connection and not assume it?


Blockbuster Video announced this week that it was shutting down, and I tweeted out a few euologies for Blockbuster specifically and video stores in general from around the internet earlier this week. While this certainly doesn't sound the death knell for video stores (which have been dead as we knew them for awhile now), it certainly does seem like the final nail in their coffin, with all but a few local, independent video stores left operating under the business model that dominated the 80s and 90s. And for the most part, I'm not too broken up over that. It's probably been at least a decade since I rented a video from a traditional video store, and I currently, via Netflix, video-on-demand and my personal movie collection, have access on a moments notice to a breadth of media options that would inspire jealous rage in my teenage self.

For all that, though, the now near-total demise of the traditional video store does bring to an end some practices I will miss. Gone are the days of wandering the aisles of a video store, checking something out based solely on the art on the box or the description on the back, and of going with a group of friends to check out a stack of tapes before a sleepover or something like that. Being an adult, those days are probably long gone for me anyways, but it is a little sad to think my future kids, for all the access to media they'll have far beyond what I had at their ages, will never get to experience those specific rituals. And there is something to be said for the arbitrary due dates assigned to rentals by video stores - when you can watch nearly anything, anytime, it becomes that much easier to watch nothing instead, because it'll all still be there tomorrow. 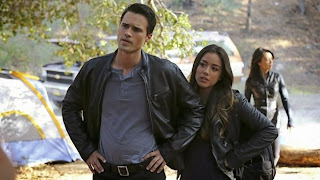 While an episode tying into Thor 2 would have been nice (apparently that will be the November 19th episode), this was another steady improvement for the show. We finally got some characterization for Fitz and Simmons (and learned Simmons first name), Skye was mostly in the background (which was simply a nice change), Coulson got to play some different beats, and Ward had a legitimately badass moment as he unquestionably grabbed the parachute and leapt after Simmons. Plus, it's always nice to see Titus Welliver (who was reprising his role from the "Item 47" short on the Avengers Blu ray).


News also broke this week that Marvel and Netflix have reached a deal in which Daredevil, Luke Cage, Jessica Jones and Iron Fist will each receive a 13-episode TV series on Netflix, followed by a Defenders miniseries that will see them all team-up (with an option for future seasons given the relative success of each). As I mentioned on Twitter, assuming the quality is there, this seems like a really smart idea for all involved.

Those characters led themselves well to the more episodic nature of TV and the smaller budgets that go along with it, while giving Marvel a chance to expand their media presence without running the risk of diluting their movie brand (removing the risk of giving a lesser-known character a film that ends up tanking). Netflix is also less-beholden to the traditional TV model, meaning the number of episodes involved can be confidently announced, yet the option for Marvel to distribute future series through the traditional model (a la SHIELD), remains.

And for Netflix, the deal not only strengthens their relationship with the Disney media giant, but also puts another feather in the cap of their original content (which has already seen critical and, reportedly (though we have to take their word for it), commercial success from things like House of Cards and the relaunch of Arrested Development). Again, so long as the actual shows are good, this should turn out well for everyone involved: Marvel, Netflix, and the fans.


Top Chef: Campfires, Cream Cheese, And Country
Yeesh. This show has always been pretty shameless about it sponsors (especially in later seasons, as the show has become a brand unto itself onto which other products want to attach themselves), but it's always sad when a sponsor takes over the elimination challenge, especially when the result is one as incongruous as this. Look, I love me some cream cheese, but did Philadelphia Cream Cheese really need to sponsor the challenge that was otherwise all about cooking locally-sourced, farm-fresh ingredients? Well, yes, of course it did, because Philadelphia Cream Cheese was paying the show to make it seem like its product was just as local and fresh by association.

But let's not kid ourselves: when Padma asks if the dishes, overall, were lackluster because the chefs were intimidated by the diners, the answer is no. The dishes were lackluster because the chefs had to cram cream cheese into their dish. Goofy challenge limitations like that are a staple of this show, but don't pretend the reason why the dishes were subpar as a result are something else, Padma.

I really thought Stephanie was going to be in the bottom, based on the way everyone (especially Tom) talked about her dessert.

Nina is on fire. This season is hers to lose at this point. Similarly, Janine is tearing it up on Last Chance Kitchen. 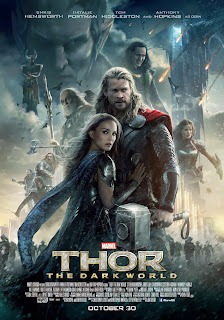 Saw Thor: The Dark World Friday night and thoroughly enjoyed it, though not without some reservations. The plot was thin, Malekith was fairly one-note as villains go (especially compared to Loki), and Thor had pretty much no character arc to speak of (relative to the first film). But it was fun to watch, every scene involving Thor and Loki was fantastic (really, every scene with Loki was - I remain impressed at how the Marvel movies in general and Tom Hiddleston's performance specifically have turned Loki into a villain far more compelling than his comic book counterpart), Kat Dennings' Darcy reminded me of how Dennings is both the sole redeeming quality of 2 Broke Girls and how much she is completely wasted on that show, and I really appreciated how much agency Jane had in the climax of the film: much like Pepper Potts in Iron Man 3, Jane is more than a damsel in distress and actually plays a role in the ultimate defeat of the villain, which is always nice to see. Overall, I'd rank it somewhere in the middle of the pack of the Marvel Studios films, above stuff like Incredible Hulk and Iron Man 2 but below the original.


Quotable Quotes
The Simpsons
Kent Brockman: We’ll have all-new regrets tonight at 11, after an all-new bottle of scotch.

Mr. Burns: Married to Jesus, eh? Does he beat her?
Private Eye: Jesus? Nope, he’s a real Eagle Scout, that one.

Bob's Burgers
Louise: You should teach at my school.
Mr. Fischoder: And you should work in my coal mine.

Linda: I was going to punch you but I'm holding wine.

Louise: Are you seeing how tan this guy is?
Tina: It's all I'm seeing

Once Upon a Time
Emma: This is where they’re keeping Henry: Pan’s compound. According to, uh…
Tinkerbell: Tinkerbell.
Emma: Yeah, I know, still weird to say.
Tinkerbell: Tink is fine.
Emma: Not sure that’s any better

New Girl
Cece: You're drinking on a Tuesday night, and you're a teacher
Jess: Oh those kids are watching a movie tomorrow
Newer Post Older Post Home
Posted by Austin Gorton at 12:00 PM