A short one this week, as I have family in town and thus significantly less time to watch TV... 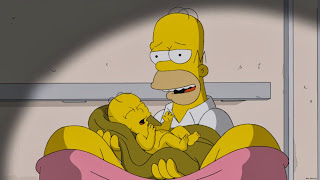 Another meh episode, with an intriguing and original premise (for this show; it's a sitcom cliche, but The Simpsons have never really done a "deliver a baby in an elevator" story before) which the script didn't seem to know what to do with (along with a B-plot that played out in the most perfunctory manner possible). The funniest parts of the episodes were a couple running gags: the ongoing poker game at Carl's apartment (that Homer was increasingly ignoring) and the other guy in the elevator ("And the funny thing is, I’m a doctor."), plus a pair of lines I'll quote below.

Family Guy: Boopa-dee Bappa-dee
Each act of this episode was like an episode unto itself. Act one: Peter tries to prove there's culture in Quahog. Act Two: Peter and Lois rekindle the passion in their relationship. Act Three: The Griffins try to get back to America. That's a lot of plot for this show to handle, and as a result, the episode felt very languorous, with most of the jokes (like the great "Peter died six hours ago" gag or the overly-complicated threats from the Mafia) happening on the margins.

Top Chef: Jazz Hands
In theory, I liked the idea of the "improv" Quickfire, though in execution it wasn't quite as exciting as it could have been. It would have been better if everyone hadn't ended up back at their starting position on the third turn. And if Kermit had started up the music with, like, two minutes left or something. Also, that challenge was nothing like musical chairs.

Patty was eliminated. No surprise there - we're still at the "winnowing out the clearly weak chefs" portion of the season.

Parks and Recreation: Gin it Up 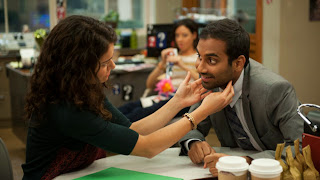 A little Jamm tends to go a long way for me (pun intended), but I did appreciate the transparency with which he was attempting to trip up Leslie. The fact that he was intentionally making a media circus out of "Twitter Watergate" and wasn't shy about it made an otherwise maddening plotline (just in terms of how it affects Leslie, and the fact that it's only funny because that kind of story would play out the same way in the real world) more enjoyable.

The Ron's will subplot was, meanwhile, one of the best Ron stories in a while, both for the way it highlighted his insane masculinty ("I was right not to be threatened by you") and his apparently-insane wealth.

Was this a tryout for Donna as Leslie's new best friend in the upcoming post-Ann Perkins world? Sure felt like it, and I could see it working out.

Quotable Quotes
The Simpsons
Milhouse: These seats are so close you can hear the players swear!
Player (offscreen): I’ll kick your ass, Milhouse!

Family Guy
Stewie: I don’t know why we even go places, we just always end up reading pornography.

Modern Family
Luke (on Alex): She's a nerd! Her friends are books!

Parks & Recreation
April: Yeah, Tom’s your guy. He actually used to run the Parks department in his home country of Russia.
Tom: Ha, ha, ha! This one is… mental. How could I be from Russia, with this spot-on British accent?
Newer Post Older Post Home
Posted by Austin Gorton at 11:00 AM