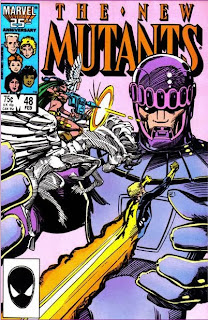 In a Nutshell
Half the New Mutants end up in a future ruled by Sentinels.

Plot
Accidentally scattered through space and time by Illyana, Sunspot, Magma, Karma and Wolfsbane find themselves in a future ruled by Sentinels, in which most of their teammates have been killed. They're are quickly attacked by Sentinels, but are rescued by adult versions of Sam and Dani from this timeline. Meanwhile, at Xavier's mansion in the present day, Magneto discusses the New Mutants' absence with Stevie Hunter, repeating his belief that they are still alive, and that he won't abandon them. In the future, Sam tells the New Mutants about the history of his timeline and how the world turned against mutants, while Rahne is shocked to learn just how cold and distant the adult Dani has become. Sam explains that most of the surviving mutants have fled Earth to live on Lila Cheney's Dyson Sphere, something which rankles Roberto. Just then, the Sentinels announce they've captured Lila and intend to execute her. 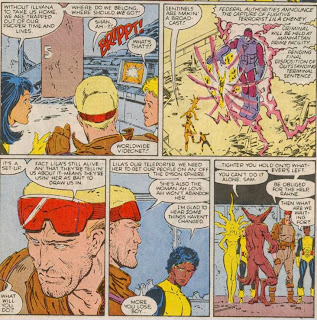 Sensing a trap, Sam and Dani are nonetheless unwilling to abandon Lila, and with the help of the New Mutants, quickly form a plan to rescue her. As Sunspot, Magma, Karma and Sam create a diversion to draw out the Sentinels, Dani and Wolfsbane sneak into the Sentinels' headquarters in Manhattan. Thanks to Wolfsbane's senses, they're able to evade the trap and rescue Lila. Later, Wolfsbane confronts the adults with knowledge she gleaned from Dani: that they intend to flee the planet and leave the New Mutants behind. Sam tells her she's right: their world is done for, and the only way to save it is for the New Mutants to wait for Illyana to arrive and return them to the past, where they can change the future. As the New Mutants wait for Illyana, Magma triggers a volcano on the island of Manhattan, something for their foes to remember the New Mutants by.

Firsts and Other Notables
In this timeline, the remaining free mutants are operating out of Larry Trask (and later Stephen Lang)'s old Sentinel base in the Adirondack Mountains, which will later be used to similar effect by X-Force early in their series.

A Work in Progress
The opening splash page sets the scene with an homage to the cover of X-Men #141, featuring a tattered wanted poster showing which of the New Mutants and X-Men have been captured and terminated. 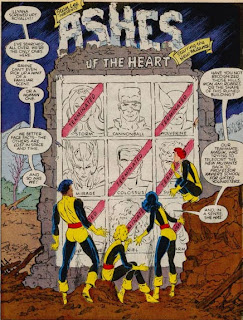 Magneto has created a series of small robotic machines he calls "widgets" to help him maintain the mansion. An interesting idea, but I don't think we ever see them again.

He also notes that while he originally took over the school to honor his friendship with Xavier, he has come to genuinely care for the New Mutants.

Roberto marvels that the adult Sam has learned to quiet his blasting to the point where he can fly almost silently; we'll eventually see "our" Sam work on controlling his blast field in similar ways. 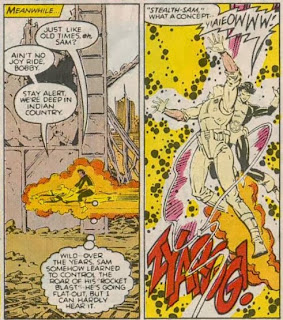 At one point, Karma worries about her still-missing siblings. 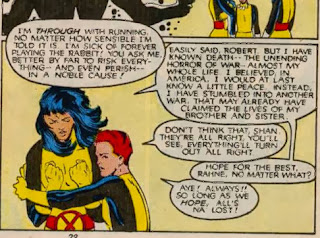 I Love the 80s
When Stevie runs into Magneto, she has a bit of dialogue so expository it'd make you think this is her first time at the mansion since Xavier left (it's not).

In the future, the Sentinels speak to the public via the "videonet".

In the ruins of New York, the New Mutants walk past Marvel's offices.

Human/Mutant Relations
In a less-specific origin than "Days of Future Past", Adult Sam tells the New Mutants that his world came to be as everyone started to blame mutants for everything: war, famine, poverty, etc. After the Sentinels were ordered to hunt down all mutants, they turned on their masters and took control for themselves (as the robots always do...) 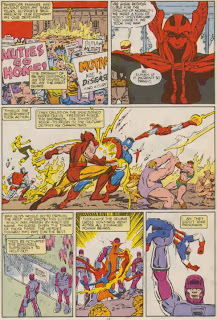 Teebore's Take
The Magus storyline continues with more time travel hijinks: the conceit of this issue and the next is that the team gets split up, with each half ending up in a different alternate future and interacting with the older versions of the teammates that ended up in the other timeline. The setting of next issue has enough of a twist to carry that story, but the setting of this one is little more than bog-standard dystopic futuristic timeline stuff. We're not quite yet at the point of diminishing returns when it comes to "Days of Future Past" homages, but we're pretty dang close (once, a Sentinel flayed the flesh from Wolverine's bones; now, a Sentinel gets outsmarted by Wolfsbane), and the future on display here is so derivative of that story (right down to the iconic "terminated" wanted poster) it may as well be set in the "Days" timeline.

Fortunately, it's not, which at least helps prevent the watering down of that story. The setting here makes for a decent enough one-off, but it's hard to get too invested in the adult and jaded Sam and Dani, nor share Roberto's outrage that his older teammates are doing the smart thing and getting the hell out of Dodge in the face of overwhelming odds. This isn't a bad story, but rather, a lifeless one (and the lack of Baker on inks doesn't help in that regard), and coming on the heels of the seemingly-unstoppable threat of the Magus and the grimness of the Marauder attack, another dystopic future where mutants are hunted down and killed, with little to help it stand out from similar settings, simply comes up lacking.

Next Issue
Tomorrow, X-Factor makes its final contribution to "Mutant Massacre" in X-Factor #12, and next week, we look at the ancillary "Massacre" tie-ins, first Power Pack #27 and Daredevil #238, then Thor #373-374.
Newer Post Older Post Home
Posted by Austin Gorton at 12:00 PM