How I Met Your Mother 9x11: Bedtime Stories 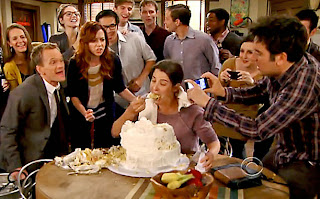 More clever and amusing than outright funny, this was, nevertheless, a pretty enjoyable episode. There wasn't much more to it beyond the central gimmick (well, I suppose James Van Der Beek returned), but it was another episode set away from the inn, it didn't involve sitcom-y wedding hijinks, and the gimmick did generate a few laughs all on its own (mainly from seeing how certain words got rhymed and/or fit into the meter - Barney in particular had some impressive ones).

Maybe it's just the English major in me, but I thought this was tons of fun. As far as stunt episodes for long-in-the-tooth sitcoms go, this could have been much, much worse. What it ultimately boils down to is whether or not you enjoyed the gimmick. I did.

Other Thoughts
I liked how Ted and Barney's stories referenced each other - a nice bit of narrative structure on top of the rhyming business.

Ditto the way the script used HIMYM's usual jump cuts to occasionally finish off a line, as in Ted musing "what do I say" followed by a cut to McLaren's and Marshall bellowing, "Teddy Westside's got a date!"

The man sitting across from Marshall on the bus was named Gus. Bravo.

I know that the show has had SagetTed clean things up for his kids in the telling before (most notably, in substituting sandwiches for joints), the act of which always makes this more apparent, but was this the first time the show openly acknowledged that the central premise of the show has led SagetTed to, on occasion, tell his kids some wildly inappropriate stories and/or details about the lives of their father, aunts and uncles?

I haven't been the biggest fan of the Marshall road trip story (and I'm still not, especially since it seems it's going to drug out even further, even though he's only five miles away), but I do like the way the mode of travel on his journey has devolved, from plane to car to bus and now to foot. I fully expect him to show up at the inn crawling.

If I'm not mistaken, I believe the particular meter in which this episode is written is iambic heptameter, a trait it shares with the theme from Gilligan's Island (amongst other more literary things, of course).

I really wanted to write this entire review in rhyme, but try as I might, I simply could not find the time.
Newer Post Older Post Home
Posted by Austin Gorton at 10:00 AM