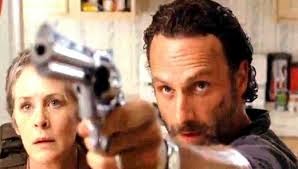 To quote Harry Dunne, “Just when I thought you couldn't possibly be any dumber, you go and do something like this...and totally redeem yourself!” Alright, that might be a bit drastic but I was getting very annoyed with this episode (and with Rick in particular) but, thankfully, this episode’s ending saved itself.

This episode had two stories. There was Daryl and his crew traveling to the Veterinary School to get medicine and there was Carol and Rick's excursion to gather any supplies they could from a nearby town. Both stories dealt with characters making (arguably) poor decisions. Carol killed two people in an ultimately fruitless attempt to stop the spread of a plague and Bob procured for himself some booze despite being an admitted alcoholic.

Bob’s decision was frustrating in that you’re annoyed with the character. It was especially annoying when he put his and other people’s lives in danger by desperately holding on to the bottle of whiskey despite nearly being pulled into a horde of zombies. However, plot-wise, his poor decision was tolerable because the characters (specifically Daryl) immediately called Bob out on his selfish behavior. It was a poor choice by Bob, to be sure, but it was immediately acknowledged as such by the show.

On the other hand, I was getting really annoyed with the Carol and Rick plot. I’ve made it very clear that I believe Carol’s decision was a bad one. (As I noted in the comments of last episode’s post, even if there was a possibility that killing two innocent people would stop the plague the chances of it being successful were low enough that it wasn’t worth it.) As the episode went on and as Rick kept silent I got more annoyed. Carol kept trying to justify her actions and while Rick said nothing I had plenty of counterpoints.

Carol: They were going to die. I was just ending their suffering.
Me: They were alive and conscious; did you ask them if they wanted they’re suffering to end in that way? Who are you to make that choice for them?

Carol: I had to stop it from spreading.
Me: And how did that work out for you!?

Anyway, Carol made her decision and while I disagree with it it is within the show's right to have her make that decision. My growing annoyance came because Rick’s silence made me think he’d end up doing nothing and, thus, I started to feel like the show’s stance was that Carol did make the right decision. A show that espouses a kill or be kill/survive at all cost mentality as the only way to live would be very tough for me to watch.

Other thoughts:
As concerned as I am for how Carl is going turn out, I think Lizzie is headed down an opposite if not equally bad path.

Tyrese’s mopey, self-destructive behavior is really beginning to annoy me. Nut up dude!

Carol mentioned that some of the medicine she found was expired. She should get used to that. I don’t think anyone will be making any more for a long time.

I’m surprised Carol set fake Mathew Lillard’s arm back into place instead of just killing him to end his suffering.

How did Daryl know what kind of battery to get? Does he have the car model/year to battery index memorized? I didn’t see him check under the hood to look at the existing battery. Should I be thinking about these things? Probably not.

Daryl’s right. Bob’s not at fault for what happened at the convenience story. Too bad Bob proved himself to be a liability anyway.

Are Daryl and Michonne going to get together? Their offspring would be the scourge of zombies everywhere.

Why could Daryl and company get into the Veterinary School and obtain the drugs without incident only to have rooms full of zombies attack them during their exit?

It’s very convenient that Ana had a recognizable tattoo on her leg that allowed let Carol and Rick to identify her body later on.

So, is fake Mathew Lillard alive? Will he be back?

I assume Bob didn’t forgo carrying actual medicine for the booze, right? Because if he did he should be fed to the zombies.

However, I doubt we’ve seen the last of Carol.

Not surprisingly, the celebrity panel on the Talking Dead seemed to side with Carol. I feel like the celebrities always fall on the side “do whatever it takes.” They first agreed with Shane’s way of thinking and now they agree with Carol. It makes me ponder the kind of mentality you need to have to “make it in Hollywood.”

Also, on the Talking Dead, Gillian Jacobs brought up the biggest reason I (and she) would never survive an apocalypse (zombie or otherwise). Without corrective lenses we’d be completely helpless. I’d probably walk myself off a cliff.
Newer Post Older Post Home
Posted by Dr. Bitz at 11:26 PM