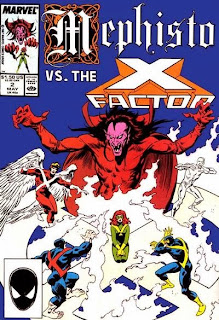 In a Nutshell
Mephisto battles a variety of superhero teams in search of a powerful innocent soul.

Plot
Issue #1: Mephisto lures the Fantastic Four to his realm, yearning to acquire an innocent soul. He tricks the Invisible Woman into giving up her soul in exchange for her teammates' lives. Issue #2: Eager to improve on the quality of the soul he's acquired, Mephisto uses Invisible Woman to draw out X-Factor, promising each member a different boon in exchange for their soul. Ultimately, Marvel Girl agrees, to protect her teammates and to free Invisible Woman. Issue #3: Reed Richards, happy that his wife has been returned but worried that Mephisto, having traded up souls once, may be targeting the soul of a god. He contacts the X-Men to warn them that Mephisto may be after Storm, who was once worshipped as a goddess. But when Mephisto appears before the X-Men, he targets Rogue, letting her learn that he intends to take the souls of all the X-Men. To protect them, Rogue flies to each of her teammates and touches them, absorbing their memories and, in effect, their souls, in order to protect them. But Mephisto reveals this was his plan all along, as he transports Rogue, along with the souls of her teammates, to his realm, returning Marvel Girl to Earth in the process. 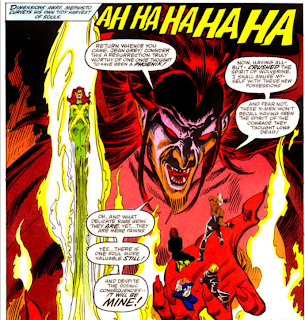 Issue #4: With the souls of the X-Men in his possession, Mephisto sets his sights on a bigger prize: the soul of Thor. However, he must battle Hela, the Asgardian goddess of death for it. Once he's acquired the soul, he releases the X-Men, but just then, the Avengers attack, allowing Hela to spirit Thor's soul away. Once Mephisto defeats them, he tracks down Hela, who tells him Thor's soul is not his to claim dominion over. Mephisto offers to end Thor's mortal suffering and give his soul refuge, but Thor refuses, and with Hela unwilling to claim it for herself, Mephisto returns Thor's soul to his body. A gloating Hela departs, reminding Mephisto that when Thor does die, his soul will become her property. Though seemingly defeated, Mephisto is confidant he has set in motion events that will lead to his ultimate victory.

Firsts and Other Notables
The conceit of this limited series is that Mephisto, Marvel's stand-in for Satan, confronts a different superhero team in each issue, so that the first issue is Mephisto vs. the Fantastic Four #1, the second is Mephisto vs. (the) X-Factor, etc.

The series is written by Al Milgrom, longtime Marvel editor, inker and penciller (he drew Secret Wars II). The fact that the words in this series are strung together into recognizable sentences puts his writing abilities far beyond those of his penciling abilities. He also inks the third issue. Pencils comes from Marvel mainstay John Buscema, whose most notable X-related work thus far was the Magik limited series, and his works in this series fits in rather seamlessly with his other work from this era, albeit this feels a bit more workmanlike than his contemporaneous work on Avengers (but maybe that's just the absence of his longtime inker Tom Palmer).

Longshot is a member of the X-Men in issue #3, having joined the team, off-panel, sometime between X-Men #214 and this issue, what he did between X-Men Annual #10 and now unrevealed.

Angel is tempted by Mephisto with the return of his wings, and in the course of the ensuing battle, Angel is blasted away from his teammates, and a footnote directs us to Marvel Fanfare #40 to learn where he lands. That story, written by Ann Nocenti and David Mazzucchelli, finds Angel crashing onto the lawn of a suburban home and restoring the will to live of an older woman living there (who believes Angel to be an actual angel).

It's actually a neat little story and the Mazzucchelli art is gorgeous (it especially pops on the higher quality paper Marvel Fanfare used), but it's not exactly required reading for our purposes (and it's only a few pages long) so I'm not giving it its own post (it also doesn't explain how Angel, his wings healed by Mephisto in this series, returns to his hospital bed, his injured wings poised to be removed, in X-Factor #13). Oh, and Marvel Fanfare #40 is the same issue that contains the tale of Storm being warned by Mystique about the government's manhunt for Rogue, just prior to Uncanny X-Men #185, which was discussed in that issue's post.

Thor's struggles in issue #4, specifically the fact that Mephisto offers to end his suffering, ties in with events in his own title and Hela's curse, as discussed in the post on Thor #373-374.

A Work in Progress
Apparently Mephisto abides by modern legal definitions of adulthood, as he agrees in issue #1 that Franklin Richards' soul is safe, as Mephisto requires a contract to take an innocent soul and that, as a minor, Franklin lacks the authority to sign such a contact.

It's established that Reed Richards (and, presumably, the rest of the Fantastic Four by default) are aware of the truth about X-Factor.

Cyclops admits in issue #2 that the X-Factor mutant hunter ruse is making human/mutant relations worse, but feels they can't drop it until they come up with a better cover for their goals, an idea that I don't think ever gets expressed in X-Factor proper. 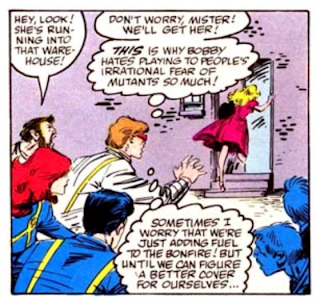 Similarly, Iceman is singled out as being the member of X-Factor most bothered by the mutant hunting ruse, something that never really comes out in the regular series.

Beasts ability to secret pheremones to make people attracted to him (from when he was blue and furry, a little-referenced by-product of that transformation) is mentioned in passing. 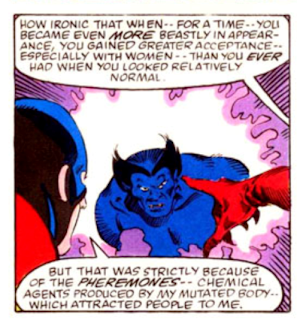 Cyclops tells the Fantastic Four that X-Factor doesn't have much dealings with other super teams, leaving Reed to warn those other teams (like the X-Men) about Mephisto's threat, which obviously keeps X-Factor and the X-Men from interacting directly.

Psylocke makes a casual reference to her bionic eyes, one of the few times they're mentioned without being a significant plot point.

Mephisto lures Rogue into his trap by making out with her. 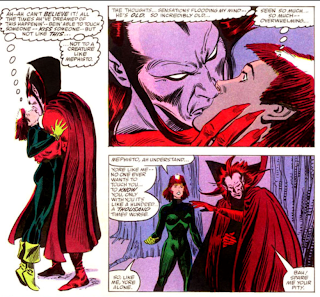 In gathering the X-Men's souls, Mephisto notes that Longshot doesn't seem to have one (presumably a reference to him being an artificial being), while Wolverine's soul is too animalistic for his purposes.

Most importantly, as the X-Men pass by Marvel Girl on their respective ways into and out of Mephisto's realm, Mephisto notes that he's shielded Jean from the X-Men's eyes, so that the X-Men remain ignorant of her return.

I Love the 80s
Goaded by hints subconsciously placed in his mind by Mephisto, Reed nonetheless makes something of a leap in deciding to seek out X-Factor.

In an odd bit of random exposition, X-Factor tells Mephisto he won't be able to beat them with fire by rattling off the list of allies and villains with fire-related powers with whom they're familiar. 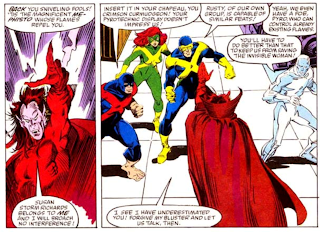 The Best There is at What He Does
Wolverine mentions having worked with Reed Richards in the past, the first, I believe, such mention of a shared past between the men.

Young Love Mephisto tempts Scott with the possibility of merging Jean and Madelyne into one woman (which is slightly, and most likely unintentionally, foreshadows part of "Inferno".

Human/Mutant Relations
When Mephisto returns Invisible Woman to Earth with amnesia, she ends up triggering a mob that believes her to be a mutant.

Teebore's Take
This is an odd little series. I'd never read it before, and I'm really curious what the genesis/goal of it was. The plot, such as it is, essentially involves Mephisto acquiring an innocent soul, then "trading up" that soul for a better option (human to mutant to god), all of which serves as a perfect excuse to send Mephisto into conflict with three of Marvel's biggest superhero teams and one of their newest. And to writer Al Milgrom's credit, most of the jaunts into the worlds of these characters is fairly consistent with the settings and circumstances of the relative books at the time (each issue contains a special thank you credit to a writer or editor associated with the characters featured in each particular issue), even if some of the dialogue is stiff and rote (particularly with the X-Men in issue #3, but maybe it's just more obvious there because their voices are so much more distinct and/or familiar).

If the whole premise of the series sounds a bit like a thinly-veiled metaphor about collectors and collecting, well, you'd be right. On several occasions Mephisto makes this subtext text, comparing his actions to that of other collectors, wrapping his newly-acquired souls in "mystic mylar" for protection, etc. Unfortunately, the metaphor doesn't quite work, as its neither subtle enough to remain subtext nor substantial enough to serve as an actual theme of the story. If the point of this series was to comment on the collector mentality (either good or bad, there's not enough of the material to be certain which way the author leans), then it comes up short. If there's another point to the series, I'm just not sure what it is, which leaves us with four mildly entertaining and well-drawn but unexciting issues. Pleasant enough, but in no ways essential reading.