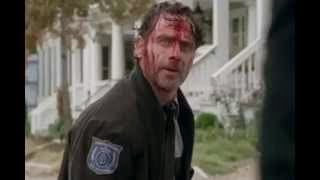 Rick, this is why we can't have nice things. You get brought to this very nice and relatively safe place and you just can't be happy. You can't accept it. And you can't accept any trains of thoughts that aren't your own.

You haven't always been like this. I mean, yeah, you've generally made bad decisions. But at least most of those decision were for the right reasons. You listened to people. Tried to reason with them. You would try to do the ethical thing.

Now, Rick, you're broken. You're incapable of taking one step back and looking at what you're doing. Sure, you're in a new place with new people who do things differently than you. And, sure, some of your points have merit. But you know what you don't need to do? Demand that they conform to your rules instead of having a level-headed, respectful debate and compromising.

And, yes, a man abusing his wife is awful. But you know what the wrong thing to do is? Make romantic advances at the wife of an abuser. Especially when you're in position of authority. Offering a helpful hand while simultaneously offering a different part of your anatomy will only serve to complicate matters and send mixed signals. Jessie needs to realize that she needs to get out of her situation for herself and her child. She should leave her husband because she knows it's best for her not because it's best for you.

Then you go and beat Pete up, Rick. (And shouldn't you have been able to handle Pete more soundly? But I digress...) Sure Pete's an asshole and I'm sure it felt good to wail on him at the time. But it'll ultimately do no good. Pete won't get sense beat into him. Heck, it may even make him more sympathetic towards Jessie who I'm sure is already feeling a lot of conflicting emotions.

I will admit, your original idea that Jessie and Pete should be separated was a good one. But, again, Jessie should be apart from Pete but that doesn't mean she should be with you. She should probably be on her own while she sorts things out.

Then again, this isn't anything I should be teaching you, Rick. You already know all this. You're were a friggin' cop! But I suppose that was long ago. So, whatever. Act like Shane. Plot to take over Alexandria and then become the new governor. Heck, maybe if rations get low you can start eating people to complete the trifecta. In the end. I'm sure everything will work out for you.

Other Thoughts:
Despite my feelings that the final episode is going to just be a big battle between Rick's group and Alexandria, I was heartened a little by Glenn's line, "We are them now."

Carol's pretty upset over Pete's physical abuse of Jessie (and rightfully so). But apparently psychologically abusing a young kid is A-OK.

Deanna is taking her son's death harder than I expected. Well, harder may not be the right term. But she's obviously just been sitting at her house moping for a long time. It sounds like losing people isn't all that uncommon, even to the Alexandrians. The zombie apocalypse is so death filled I'd think you'd get desensitized to it. I'm not saying that she wouldn't mourn. I'm only saying that I'd think her mourning would be on the inside while she keeps on keeping on the outside.

Pete's an asshole. But, still, the fact that he's the only doctor in town still makes me wonder what should be done.

I think I'm pretty much on Rick's side regarding the death penalty vs. exile. Although, it still feels unseemly. (At the same time, Rick talks a big game but has he ever actually executed someone because of a crime they committed?)

So we got a nice teen romance plot brewing. I'm already bored with that.

Sasha's impulse to hunt zombies isn't necessarily a bad one Although, it does waste bullets

Sasha claimed that things "worked out" for Michonne. Not sure what she means by that.

I feel like there's overwhelming sentiment that the Alexandrians are "lucky" and got the wall up "just in time." I think building a wall to keep the zombies out is making your own luck.

It would be ill advised to have Rick's group come into Alexandria and not have stories involving friction between the new comers and the established residents. I just would prefer a slow burn. And I'd prefer the friction mostly take the form of rational discussions. You'll always have those unwilling to compromise and maybe, eventually, something happens that causes a giant rift between the people inside the walls. But that could happen in a season or two. Not after, around, 3 episodes. There was barely even a settling in period. The Walking Dead rushes too fast towards the next big shake up.
Newer Post Older Post Home
Posted by Dr. Bitz at 2:53 AM