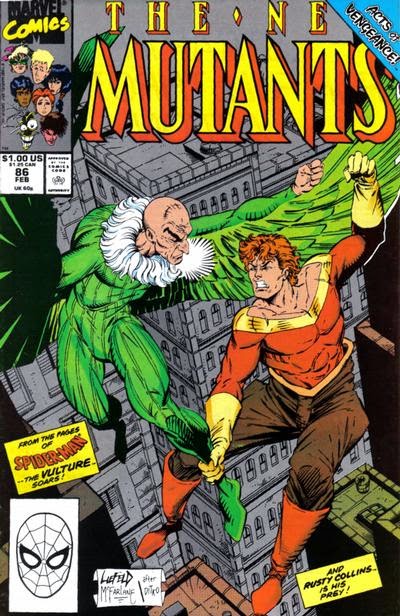 In a Nutshell
Rusty & Skids battle the Vulture & Nitro.

Plot
The Vulture arrives at the home of the Tinkerer, angry at the inventor having purloined the Vulture's design for this flying harness, but the Tinkerer explains he was hired to make the wings to enable the Vulture to break out of prison, and to instruct the Vulture to attack Speedball after he escaped. But Vulture scoffs at the notion, instead focusing on his primary goal: freeing Nitro. Back at the prison, Rusty and Skids commandeer a truck, intent on stopping Vulture, despite Skids' reservations about helping humans. Later, Vulture and Tinkerer arrive at the Albany Courthouse where Nitro is being tried, and Vulture swoops in, grabbing the canister containing Nitro. On the roof, Tinkerer works to open the canister while Rusty and Skids arrive below. They climb up onto the roof, with Rusty launching himself at the Vulture just as Nitro is freed. 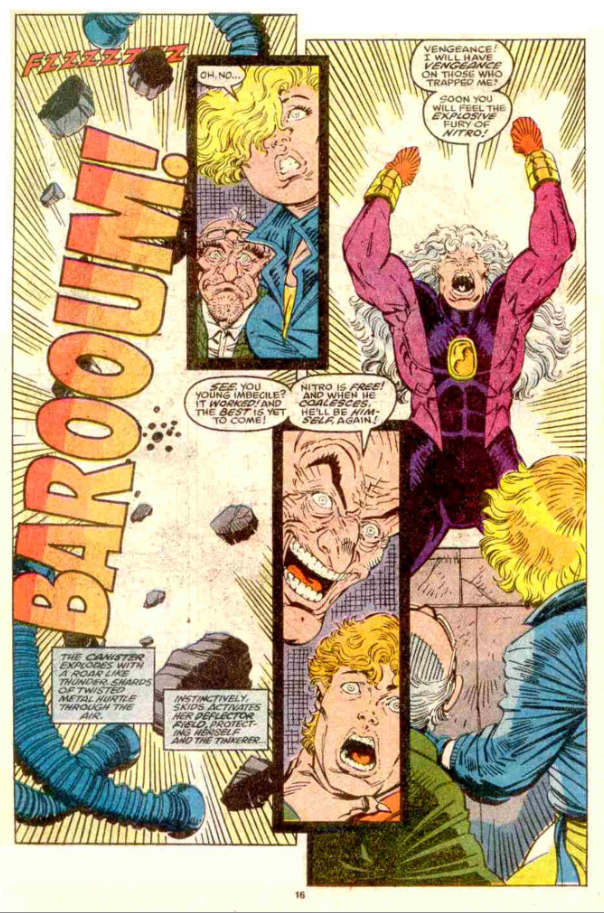 In the sky above, Rusty burns off Vulture's wings, sending them both crashing to the roof and knocking out Rusty as Nitro begins powering up. But just as he's about to explode, Skids tackles him, using her force field to absorb most of his blast, leaving Skids weak and causing Nitro to disintegrate. Meanwhile, in Asgard, the New Mutants are healed via the Elixir of Life, but they learn that with the Rainbow Bridge shattered and Asgard adrift in the Negative Zone, they have no way of getting home. Back in Albany, Freedom Force arrives on the scene, taking everyone into custody despite Rusty's frantic insistence that Skids needs medical attention, with Crimson Commando telling the gathered media that Rusty and Skids were working with the villains. Later, the Mutant Liberation Front blows up an federal energy research facility, with their leader declaring that for every day Rusty and Skids remain captives, another symbol of humanity's prosperity will be destroyed!

Firsts and Other Notables
Rob Liefeld joins the book as the new regular artist this issue, and arguably no artist has had as big an impact on an X-book as quickly as Liefeld does on this series, soon becoming a co-plotter, then effectively ousting Louise Simonson and plotting everything himself (with Fabian Nicieza scripting), creating two brand new characters who will each end up headlining several solo series a piece (and one of whom currently has his own movie in the works), and shepherding the series' transformation into X-Force, the first issue of which briefly held the title of the best selling comic of all time, all within the next fourteen issues of New Mutants.

While there will be plenty of occasion to mock his art, I also can't deny how alluring it was to me as a kid, reading this material for the first time. I read these issues as back issues, but I still looked forward to when the Blevins art (and especially the Shoemaker/Isherwood fill-ins) gave way to Liefeld. Everything just seemed bigger when Liefeld (and many of the other future Image guys, like Jim Lee and Whilce Portacio) drew them, like the camera had been zoomed in on the action so that nearly everything was a medium-range to closeup shot, and the pages burst with energy, the action often busting right out into the gutters, as though the panels themselves couldn't contain the art.

Of course, I realize now a large part of that was a deliberate effort to mask flaws: characters constantly drawn in mid-to-close shots don't need feet, and with the figures filling more of the panels, it's easier to skip out on drawing backgrounds entirely. But while I see that now, all the flaws, the wonky anatomy, the fact that everyone has the same squinty face, repeated, often nonsensical design elements like thigh belts, the obvious swiping from other, mostly better, artists, they were completely lost on me as a dumb-ass kid, and I ate it all up, including Rob Liefeld's work, with the biggest of spoons.

The final page of this issue introduces the Mutant Liberation Front, a team of mutant terrorists filling the "Brotherhood of Evil Mutants" void left in the wake of Freedom Force's creation. Most of their members are in shadows here, but we see Wildside (whose weird triangle shaped hair will become something of a hallmark of the early 90s X-books), Strobe and Zero in full. The MLF will serve as the chief antagonists of the Cable-led New Mutants through the end of this series and into X-Force, and will continue to appear in various iterations well into the 90s. 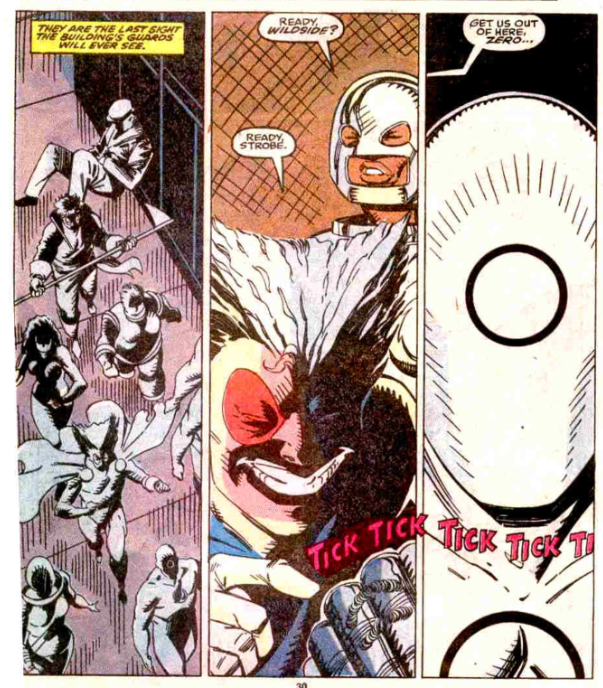 We also see the arm of their leader, who will shortly be revealed as Stryfe, and a one panel sneak peak of Cable, both of whom appear in full for the first time next issue. 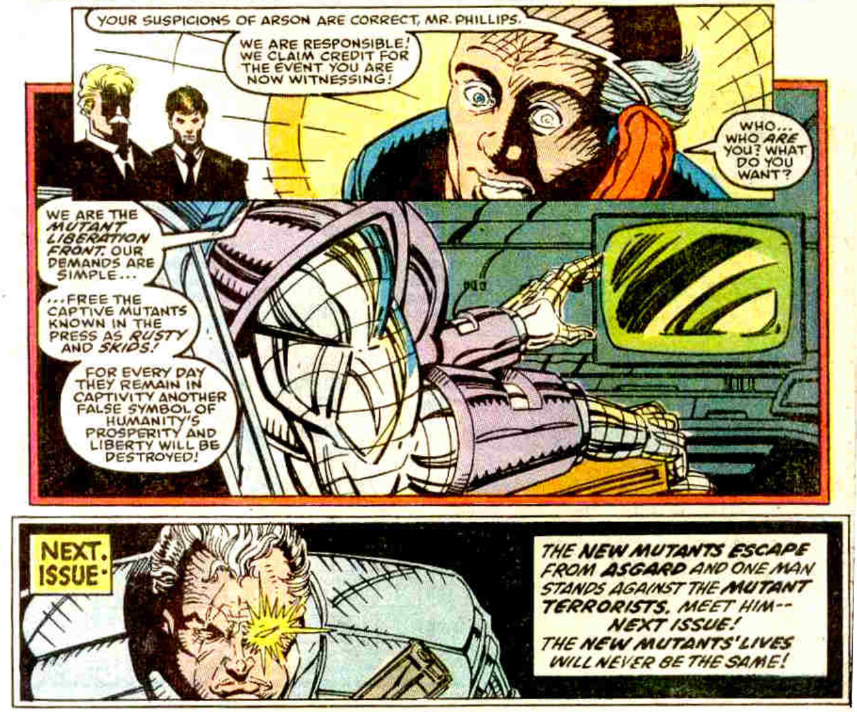 The cover of this issue, drawn by Liefeld and inked by Todd McFarlane, is an homage to Amazing Spider-Man #2, the first appearance of the Vulture, with Rusty subbing in for Spider-Man. The cover signature notes "after [Steve] Ditko".

After two issues sporting the "Acts of Vengeance" tag, this issue finally puts the tie-in center stage. In addition to the Vulture, who's been flitting about the series for the last few issues, the Tinkerer, another old Spider-Man villain, appears in this issue, along with Nitro, the villain credited with causing the cancer that killed Captain Marvel (Mar-Vell) and who later triggered the events of "Civil War" by blowing up a good chunk of Stamford, Connecticut during a battle with the New Warriors. 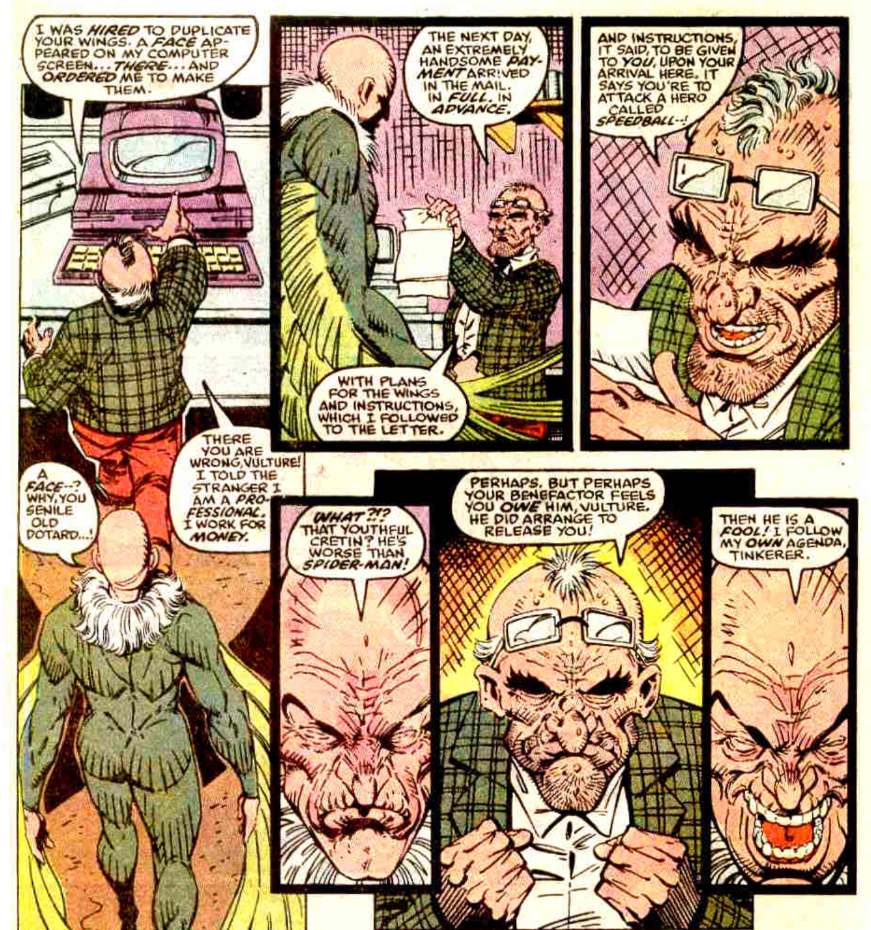 In perhaps another thinly-veiled message from Simonson, it's implied that Loki arranged for Vulture's escape from prison so that he could attack Speedball, an idea Vulture quickly ignores, saying battling someone like that is small potatoes and not worthy of the term "vengeance" (also, in another little coincidence, Speedball was one of the New Warriors present in Stamford when Nitro blew up, and he became ridiculously emo as a result). 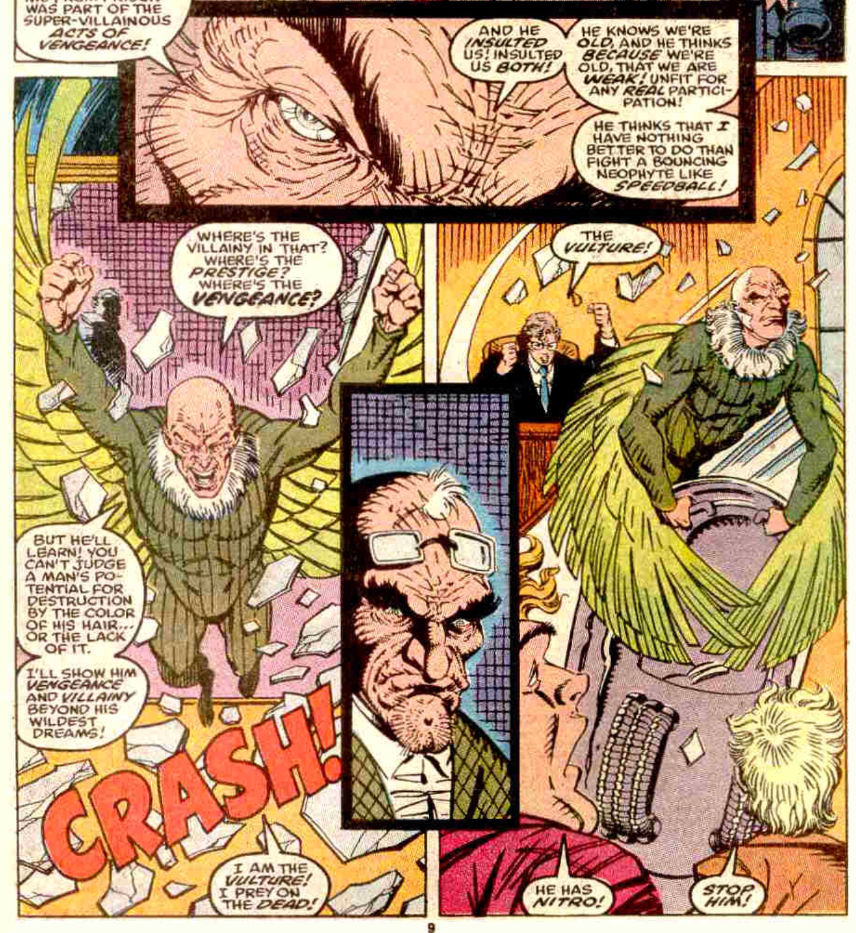 Freedom Force pops up in this issue (consisting of Blob, Pyro and Crimson Commando), spinning events to paint Rusty and Skids as being in collusion with Vulture and Nitro, and referencing their recent losses at the hands of the Reavers as examples of what happens when mutants go bad. They'll continue to hang around for the next few issues. 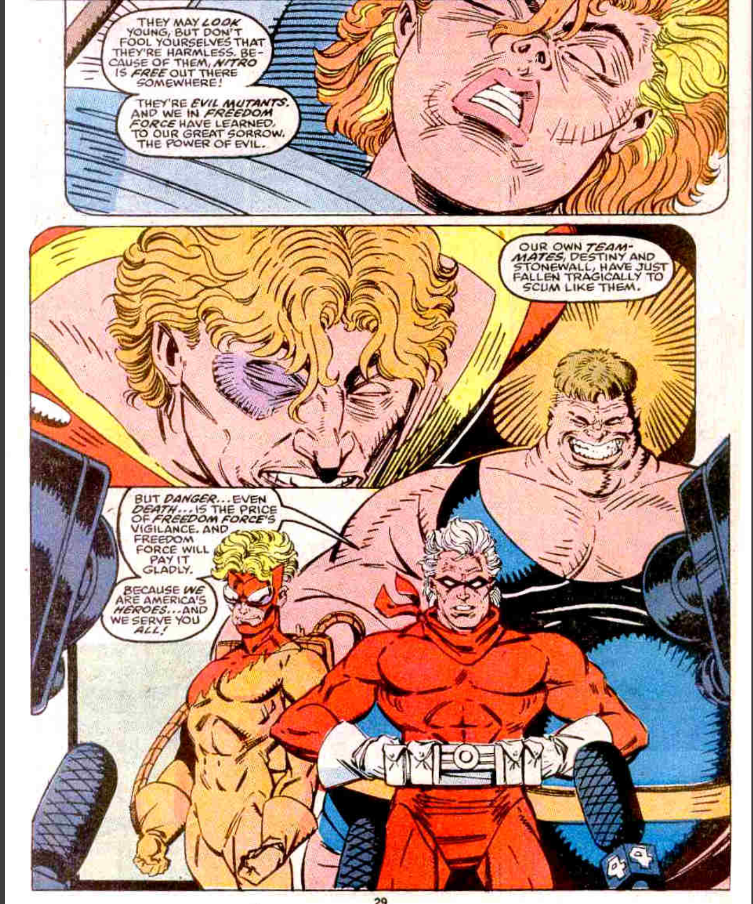 A Work in Progress
The New Mutants injured during the battle with Dani last issue are healed thanks to an elixir provided by Hogun the Grim.

Boom-Boom is also starting to come around on Asgard, saying it's not so bad there.

501 Genes
Not that plenty of other artists, including Bret Blevins previously on this series, aren't guilty of this on occasion, but one issue into his run and Liefeld is already skimping on the backgrounds, often putting the characters against solid backdrops of color in lieu of drawing in details. 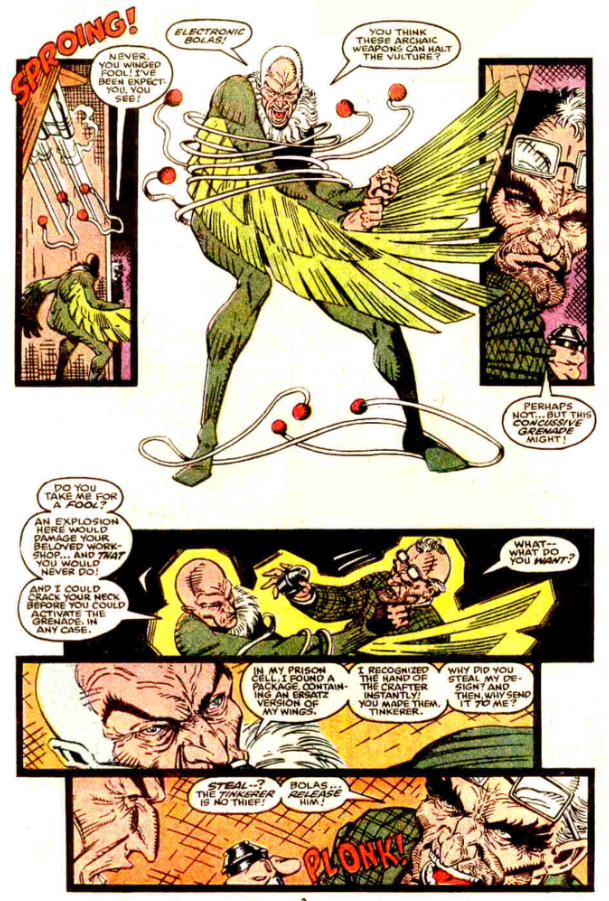 Later, Nitro and Vulture yell at each other with their eyes closed for some reason. 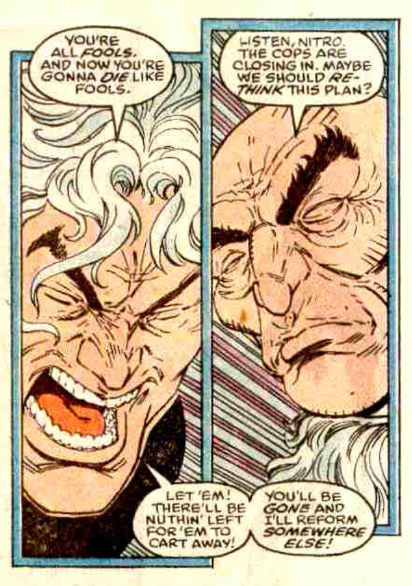 Human/Mutant Relations
Skids continues to question the idea of helping save humans from Nitro, with Rusty again arguing that it will make for good publicity for mutants, the public seeing two of them risk their lives to help regular humans, and the press at Nitro's trial will afford them an opportunity to expose Freedom Force's plans for the Inferno babies (which is here said to be to train them for combat). 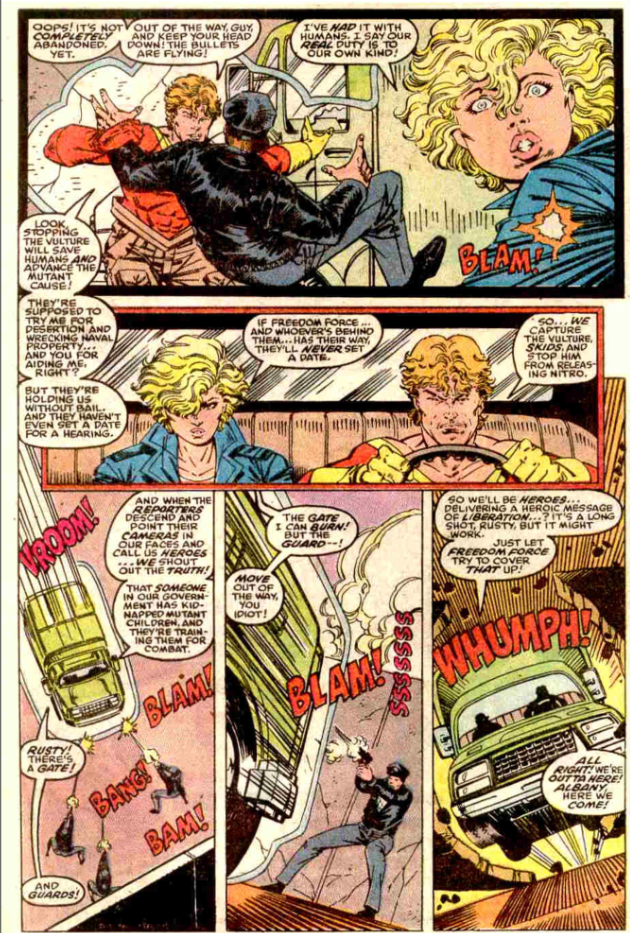 Rob Liefeld on being hired on New Mutants.
"I remember the day that [Bob Harras] called me. I had just got up, and it was 8:30 in the morning my time, and I was making some toast, and I got this phone call. The voice said, 'Hi, Rob, this is Bob Harras.' And he wanted to see if I wanted to take a shot at a fill-in or something for The New Mutants. My response was, 'you really have to ask? Sure!' So he asked me to do some sample pages for him, and he was pleased with them. He is the editor I've been working for primarily at Marvel. I can't say enough good things about Bob. Bob showed tremendous faith in my work and that it was going to improve. He immediately gave me an X-Factor job to do, and that turned into an X-Men assignment and then I did the (1989) New Mutants annual for him. The New Mutants was the book I wanted the most. I see a lot of untapped potential in this book."

Rob Liefeld on working with Louise Simonson.
"Her plots are wonderful. They are so easy to draw from. She gives you everything you need."

Teebore's Take
Though the main story is an "Acts of Vengeance" tie-in and the vast majority of the New Mutants only appear in a few pages that serve as an epilogue to the Asgard story, this is one of the most significant issues of the series, for one reason and one reason alone: Rob Liefeld. Yes, the era of squinty eyes, poor anatomy and disappearing feet is here, but love him or hate him, there's no denying the singular impact he has on the series, the third artist with a distinctive style to leave his mark on the book. The issue itself is fairly routine: the Rusty/Skids/Vulture subplot gets top billing and a resolution, and while Skids' sudden disdain for humanity feels a bit forced, there's a definite gut-punch to Rusty and Skids saving the day only to have their efforts twisted by Freedom Force, especially in light of Rusty's earlier optimism that stopping Nitro will win them an opportunity to tell their story to the press and some good press for mutants as a whole.

But in hindsight, all of that feels like an afterthought, the tying up of a loose thread from the B.L. (Before Liefeld) era. It's the closing panels of the issue, as the Mutant Liberation Front is introduced and the arrival of Cable is teased, that Liefeld's presence is truly felt, as the newly christened regular penciller already begins shaping the future of the book. Those last few panels herald the beginning of the book's fourth and final iteration, one that will ultimately transform the series, in just fourteen issues' time, into something nearly unrecognizable relative to this issue, while elevating it, for a time, to one of the industry's best-selling and buzz-worthy titles.

Next Issue
Tomorrow, Ship lands in New York in X-Factor #51. Next week, "Acts of Vengeance" Part 4 and Excalibur #19.