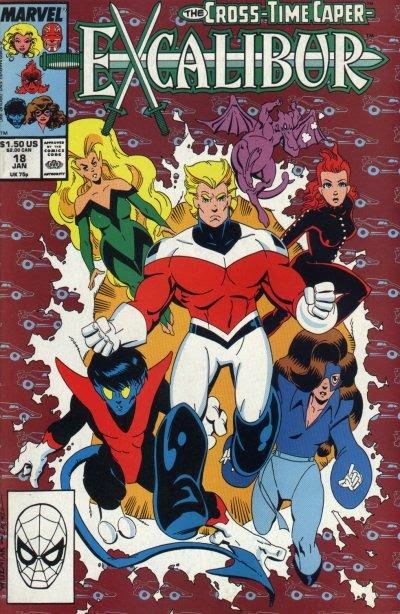 In a Nutshell
Excalibur lands on a world controlled by Jamie Braddock.

Plot
While traveling between worlds, the mysterious link between Meggan and Phoenix causes Phoenix to violently crash their train onto a new world, one obsessed with a global grand prix of which Captain Britain's brother Jamie is the champion. In the wake of the crash, Meggan is captured by Jamie and Captain Britain chases after them, as Phoenix grows sick. Later, Widget transforms into a race car and Kitty, worried about her teammates' continued absence, sets out after them. She comes across Captain Britain, who has lost the ability to fly but is walking after Jamie, and the pair are assisted in their hunt by a two cops calling themselves the Dirty Angels. Meanwhile, Jamie tries to take control of Phoenix through her link with Meggan, but is interrupted by the arrival of the Dirty Angels, followed by Kitty and Captain Britain. Jamie sets Meggan against Captain Britain as he attacks Kitty, but her phased state makes it difficult for him to use his power on her. She manages to escape, but he captures Lockheed and Widget, confidant that as long as he has them, she'll be back. Meanwhile, Captain Britain emerges from the rubble of his battle with Meggan clutching her unconscious form, swearing that his brother will do no more harm.

Firsts and Other Notables
Excalibur encounters a version of Jamie Braddock for the first time this issue, as they land on a world in which he basically reshapes the planet to his whims via his reality warping powers. Interestingly (to me, at least), Captain Britain doesn't know his brother from his world has powers.

A pair of weird, Manga-esque female cops show up in this issue, gunning for Jamie. I have no idea where, if anywhere, that's going. 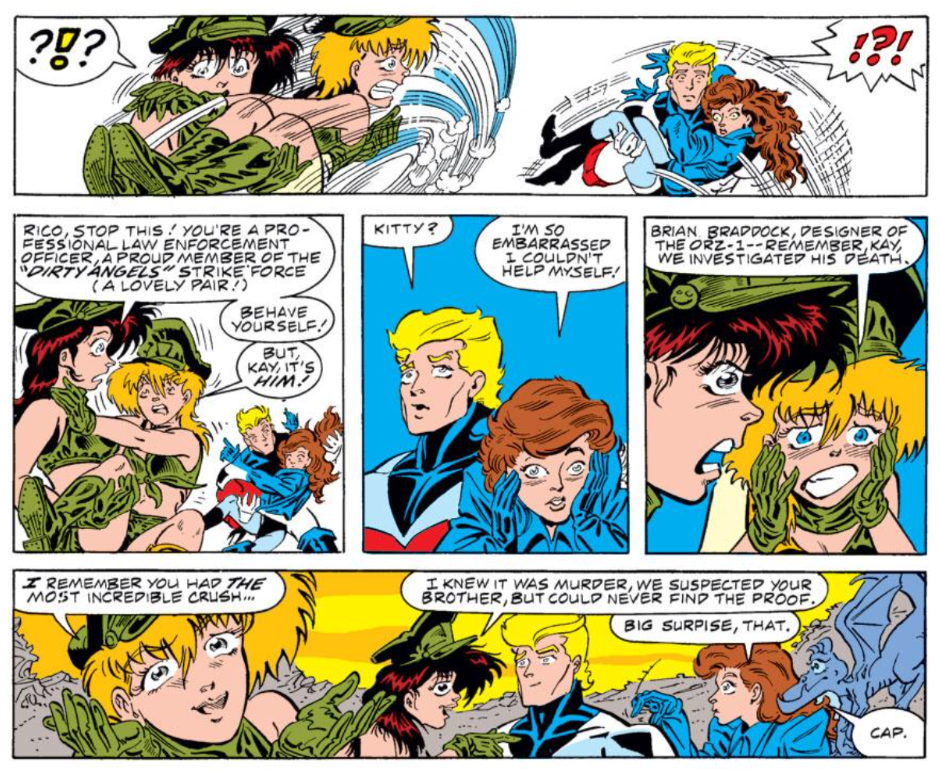 Art in this issue comes from Dennis Jensen, a name with which I'm completely unfamiliar, who is billed as a guest penciler. However, though Alan Davis will return to draw two more issues of "The Cross-Time Caper", he has said in interviews that last issue was actually his last regular penciling work for the series, at least until he returns much later as writer and artist, meaning the book is without a regular artist at this point.

A Work in Progress
Excalibur's train is said to travel through a "pan dimensional void", and it's made clear that it takes time to travel between worlds (rather than the train just popping from one world to the other nearly instantaneously. We see said void for the first time this issue.

Kitty notes that Psylocke spoke fondly of her older brother, which of course had to have happened off panel. 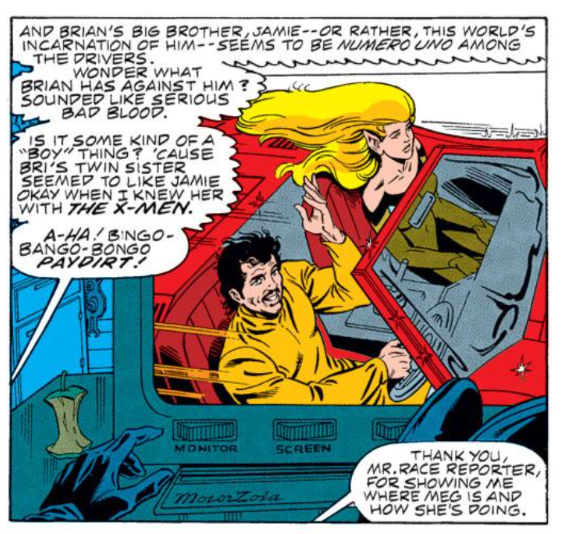 It's noted that Rachel's powers keep her from getting sick, which is probably tied to the notion of her being able to telekinetically control molecules. 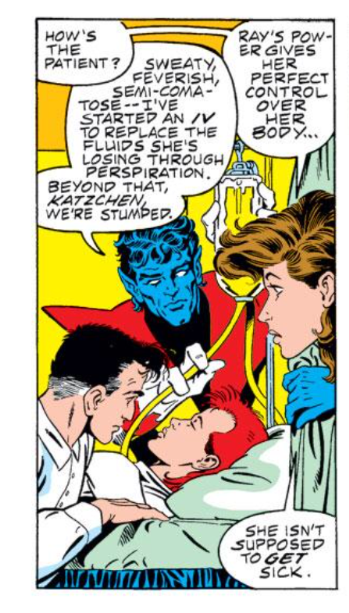 Nightcrawler is oddly protective of Kitty at one point, basically saying he should go after Brian and Meggan because she's a young girl, despite everything they've been through together. 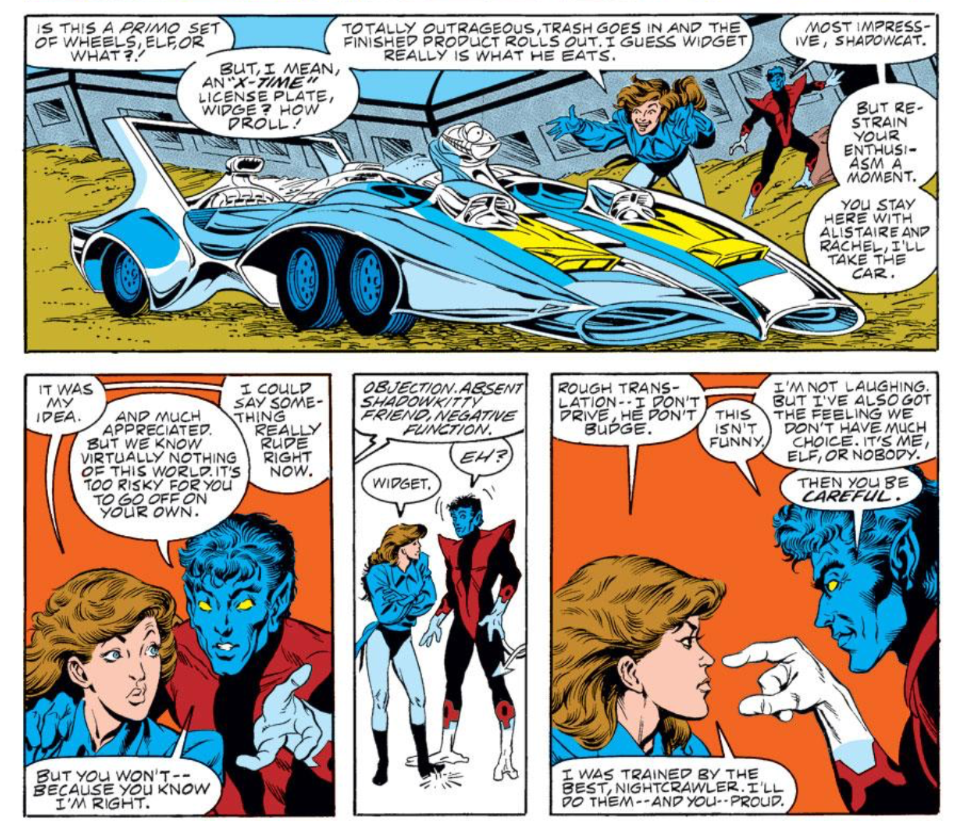 This version of Jamie (and presumably the regular version as well) is jealous of how much his parents doted on Captain Britain and Psylocke, calling himself the prototype child for them. 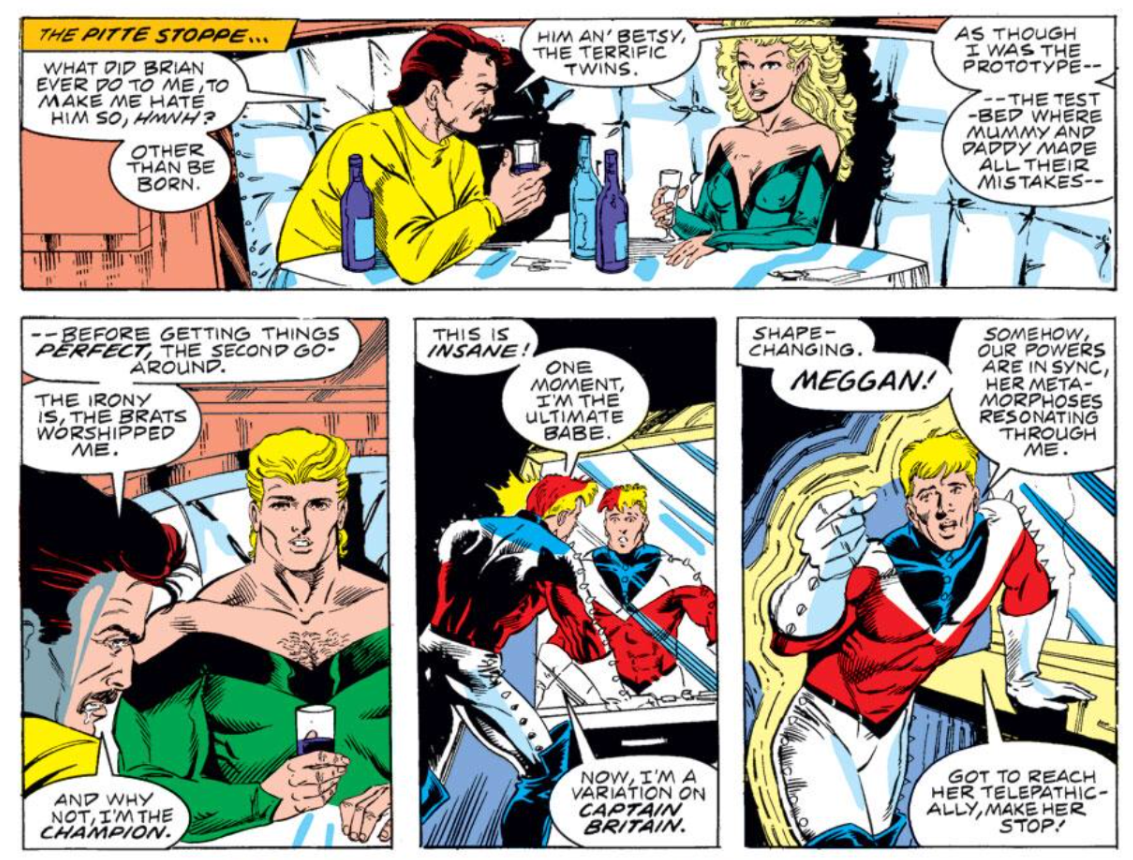 Jamie, who views reality as an assortment of strings he can manipulate, finds Kitty's strings to be slippery and hard to grasp when she's phasing. 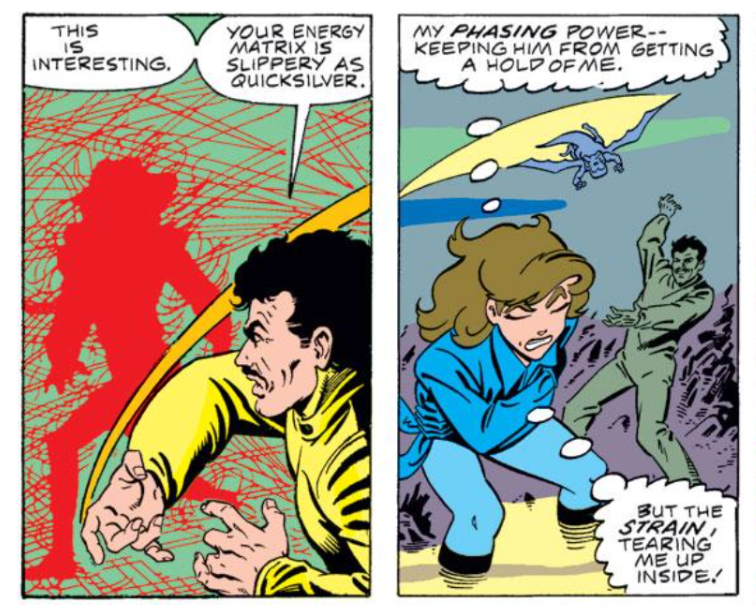 Teebore's Take
This issue marks the first encounter between Excalibur and Jamie Braddock (or, at least an alt version of him), and in theory, that should make for an interesting story, due both to Jamie's relationship to one of the series' main characters and the setup of his villainy/insanity in earlier issues of this storyline. In practice, this is just...weird. Some of that is intentional, as it becomes clear that the latest world Excalibur has arrived on is being warped by Jamie's power, but it becomes hard to tell exactly what he's affecting and what he's not (the world's obsession with auto races? Jamie. The fact that the characters don't really sound like themselves even though the issue is written by Claremont? Not so sure). And then there's the two random Manga-esque women obsessed with capturing Jamie, and the weird shift in art that accompanies their arrival, which, again, is probably supposed to be an indication of Jamie warping reality but it remains unclear why.

Which really gets to the heart of this issue's problem: the art. The one saving grace of the interminably-long "Cross-Time Caper" thus far has been Alan Davis' art, which has at least made the book fun to look at it even if the stories have been, more often than not, rather humdrum. But Davis is gone now, in any significant way, at least as far as "Cross-Time" is concerned, and this issue suffers for it. Claremont clearly wrote it expecting Davis to draw it, and he probably would have handled the subtle shifts in art, indicating Jamie's madness, just fine. But without him, this is just a mess, with sloppy layouts, inconsistent figure work and downright confusing action muddying what would otherwise be one of the more significant and intriguing chapters in the long-in-the-tooth story.

Next Issue
Tomorrow, Wolverine gets the heck out of Tierra Verde in Wolverine #20. Next week, Uncanny X-Men #258 and New Mutants #86.