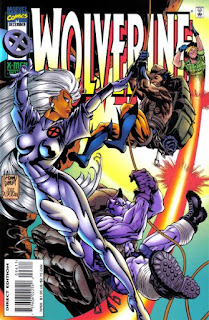 Plot
In the Canadian Rockies, Storm & Wolverine bring Cannonball & Caliban camping. As they sit around the fire telling X-Men "war stories", a bear stumbles into camp, nearly disrupting the cloaked surveillance being conducted by Zoe & Noah of Landau, Luckman, & Lake. After Wolverine, recognizing that the bear is merely hurt & afraid, stops its attack peacefully, Zoe begins to have second thoughts about their operation, and transports herself & Noah away, while Wolverine wonders to himself how he's going to tell his friends that the feral side of him is taking control. Meanwhile, in Egypt, the Dark Riders usher Cyber into a vault-like chamber. Suspicious, he attacks, but they manage to lock him inside, at which point a swarm of deathwatch beetles are released in the room, which devour Cyber, leaving behind only his adamantium skin, thereby giving Genesis the means to his end.

Firsts and Other Notables
Cyber dies this issue, as he's devoured by a swarm of "mutant death watch beetles" who consume his flesh, leaving behind only his adamantium skin (which will in turn become the adamantium which Genesis will try to implant in Wolverine in issue #100). Cyber's death will stick for a good chunk of time; he eventually returns in the 00s' Wolverine: Origin ongoing written by Daniel Way, but this is his last appearance until then. 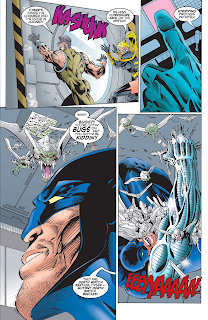 A Work in Progress
Zoe & Noah continue to monitor Wolverine while cloaked, with their operation almost being disrupted by the bear attack in this issue. 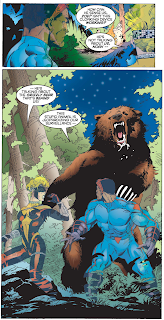 The tale Wolverine tells of Storm comforting him with a one-of-kind flower blossom following his aborted wedding to Mariko obviously occurred sometime around issue #173. Later, Storm references a time Magneto trapped her underwater and Wolverine swam down to cut her loose, kissing her to share his air with her in the process; near as I can recall, this is something Hama made up, but if someone knows this to be a reference to a specific story I'm forgetting, sound off in the comments.

Austin's Analysis
Another time-killing issue. The art is nice (Luciano Limo handles the Cyber, as far as I can tell, which is workmanlike but a clear step down from Kubert) and there's a few good character moments - Wolverine telling an X-Men "war story" that's really about the bond between the X-Men and how they're a family is particularly touching - and Hama tries, as with all the largely done-in-one issues in this stretch - to tie it all in with the larger "Wolverine is becoming more feral" plotline, but his efforts in that regard seem increasingly less committed the closer we get to when it all comes to a head.

Also, this is a bit of a nitpick, but the pairing of Caliban & Cannonball in this issue seems totally random. Hama has done a decent job of casting Cannonball as the eager rookie to Wolverine's grizzled veteran post-AoA, but the only indirect Cannonball & Caliban interactions I can think of were when Caliban fought Sabretooth in the Morlock Tunnels and the New Mutants were there, circa New Mutants #90-91; more recently Caliban joined X-Force at the same time Cannonball left it, so while I'm sure they've bumped into each other since, there's little to suggest they've become the chuckling chums they're presented as here. That aside, then, it's not a bad issue - and the developments with Cyber do represent a not-insignificant advancement of the larger overarching plotline - but it does feel like a slight issue, even compared to the standard set by the previous four issues, in which not a whole lot, plot or character-wise, happened either.