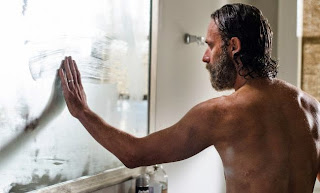 In last week's post I brought up the quote from Spock in the Star Trek episode "Mirror, Mirror", “It was far easier for you as civilized men to behave like barbarians, than it was for them to behave like civilized men." I think we’re seeing evidence of that in this episode of The Walking Dead. Rick and company have found themselves in a relatively tranquil gated community complete with modern conveniences. It becomes obvious they have no idea what to do with that.

When dissecting this episode I suppose the first thing to decide is whether or not you trust Alexandria and their people. I’m taking them at face value. I think they’re a group of people who found a sanctuary that shielded them from the zombie apocalypse. They're genuine (although some are douche bags) but, having been shielded from the zombie apocalypse, they are a bit soft. In other words, I don't think they're perfect but I don't think they're evil.

Rick's group is hardened. Possibly too hardened. Rick's group has become so distrusting (and also so obsessed with not being "weak") that you wonder if they can integrate themselves. Daryl isn't even trying. Carol is integrating only in the interest of undercover intelligence. Rick isn't sure what to do but he's definitely suffering from PTS...and so is the rest of the group...probably. Michonne is the only person who seems to accept where they are and what they have found. That's interesting since, when we first met her, she was the most isolated and “feral” of all.

This episode (and apparent new status quote) is new for The Walking Dead. We've been conditioned to be on Rick and company's side. They may be antiheroes at times but they were always the protagonists. However, in this new setting we are forced to wonder if they are now the enemy.

I don’t know what may happen. But, whatever is going to happen, I’m happy that it’s going to be something new. Or the entire town will end up being raping, cannibal puppy kickers...

Other Thoughts:
I was pretty sure that it would've been a bigger issue for Rick's group to agree to give up their weapons. Heck, Season 2 Walking Dead would've spent an entire episode on it.

Playing the doting house wife aside, Carol has been relatively quiet these last episodes. I'm not even sure if she thought going to Alexandria was a good or bad idea.

I do wonder about the logistics of Alexandria's indoor plumbing and electricity but my knowledge in that area is so limited that wondering is about all I can do.

Have we ever seen Rick completely unshaven and without stubble? Maybe in the first few episodes?

Carol seems suspicious that the Alexandria group are just "giving away mansions." Uh...what else are the going to do with them?

When Rick told Deanna that she hadn't given himself and Michonne jobs yet she says, "I have, I just haven't told you yet." We now know they were to be constables but Deanna had to know how ominous that sounded, right?

I will say, for the most part the townsfolk seem very understanding of Rick's group's quirks and apprehensions. Even the kids treated Carl alright.

Speaking of kids, where was Enid off to? Maybe to report back to another group of people?

What was Rick looking at when he came to the rundown house outside of Alexandria where the zombies swarmed him? He seemed pissed about something.

The whole "pregame ritual" scene rang a bit false for me. Capturing a zombie to torment it was fine but I find it hard to believe they wouldn't just kill it once it got loose. I understand that the idea is that Alexandria has had it pretty good and they're not taking zombies seriously but Nicholas was just talking about how that zombie killed two men. So they do no how dangerous zombies can be and have felt the ramifications.

That being said, Nicholas is an incredible douche.

Why was Daryl allowed to keep his crossbow? Not that I don't want Daryl to have his crossbow...I'm just asking.
Newer Post Older Post Home
Posted by Dr. Bitz at 5:24 PM