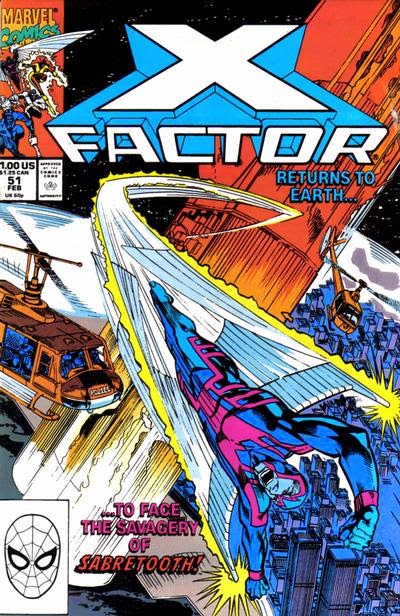 In a Nutshell
X-Factor returns to Earth and settles back in New York.

Plot
In New York, two surviving Morlocks, Mole and Chicken Wing, are hunted by Sabretooth. Chicken Wing is killed, but Mole uses his power to escape into a building. Watching from Apocalypse's base in the Himalayas, Caliban yearns to go to New York and use his new powers to kill Sabretooth, but Apocalypse insists he must have patience. Meanwhile, X-Factor returns to Earth, and Ship lands himself upright where the old X-Factor building was, transforming himself into a skyscraper. Elsewhere, Opal Tanaka discovers Mole in the basement of the record store where she works, but agrees to let him stay. Back at Ship, X-Factor's return has caught the attention of the press and the police, but their helicopters are caught in a scrum and X-Factor springs into action to rescue everyone, including police officer Charlotte Jones. 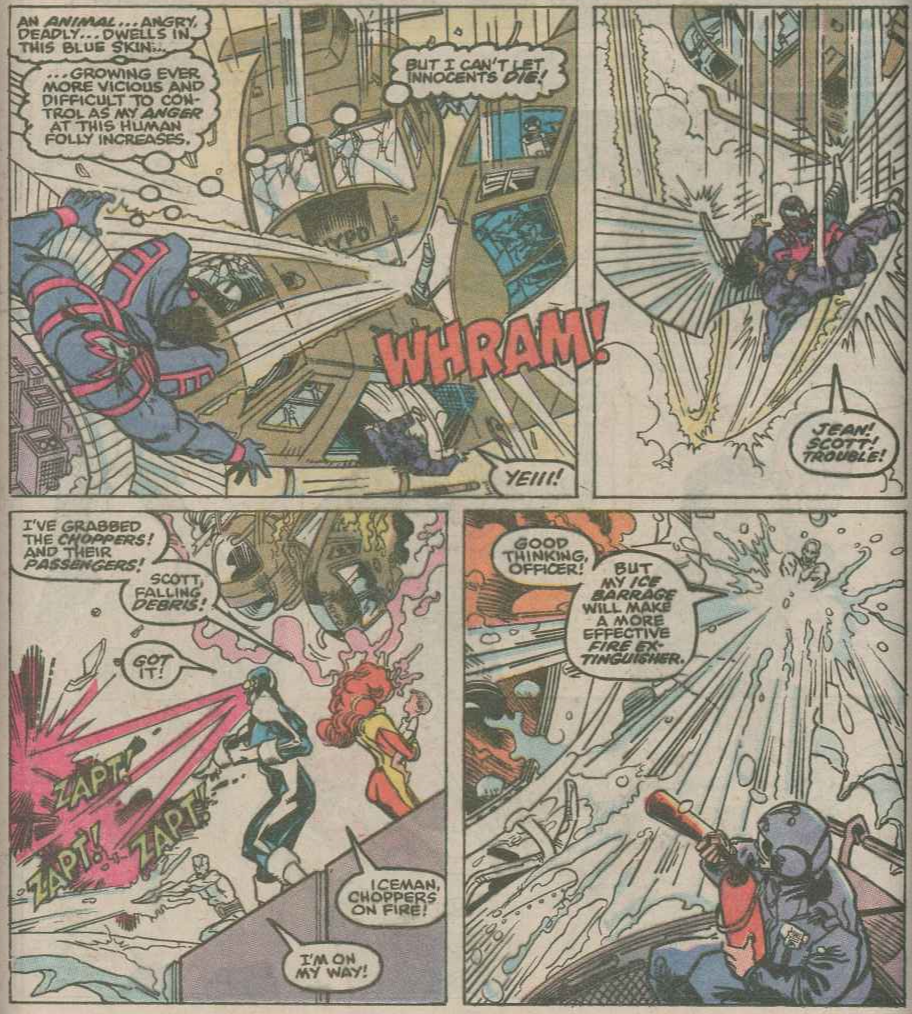 On the ground, they hold a press conference, where Beast is reunited with Trish Tilby. But Archangel is uncomfortable with the attention, and feeling his wings responding to his fury, he flies off before he hurts someone. The press is dismayed, but Charlotte Jones sticks up for him. Sabretooth watches from a nearby rooftop as Archangel flies by, while in the Himalayas, Caliban disobeys Apocalypse and teleports himself to New York. However, this pleases Apocalypse, who wanted Caliban to take the initiative, believing that, in time, Caliban's predations will cause all mutants to come together in strength to stand against him.

Firsts and Other Notables
Returning to Earth, Ship lands in Manhattan, positioning himself as a skyscraper to give X-Factor a permanent home. In a couple nices detail, Ship lands on the spot of X-Factor's old headquarters (which Ship destroyed during "Fall of the Mutants"), so he's only taking up land X-Factor already owns, and he mentions that he's not putting his full weight down on the land, so as to avoid damaging the bedrock. Ship will remain in place as a building pretty much through to the end of this iteration of X-Factor, just prior to the '91 relaunch. 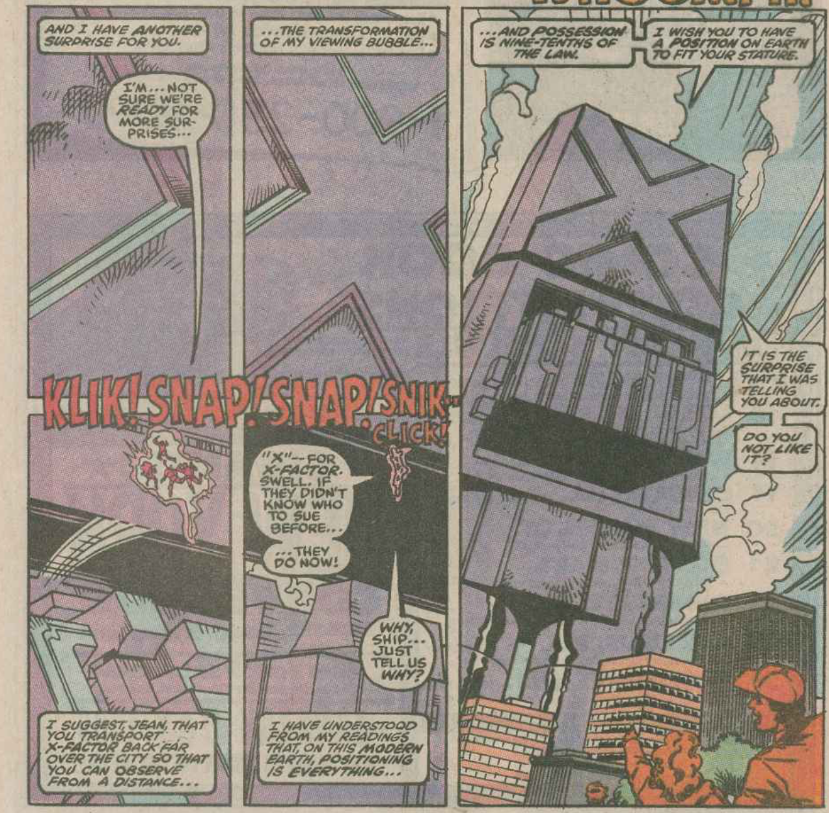 This issue introduces two new women who will become supporting characters in the book. Opal Tanaka is an Asian woman who works at a record store and will become romantically involved with Iceman. 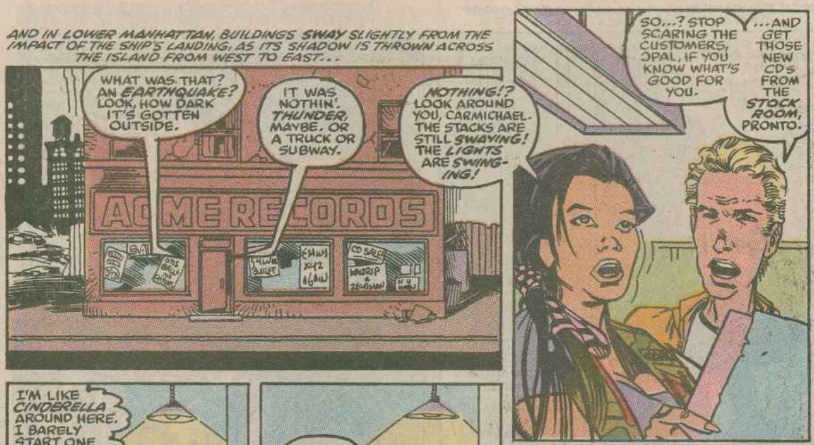 While Charlotte Jones is an African-American police officer who will become romantically involved with Archangel. 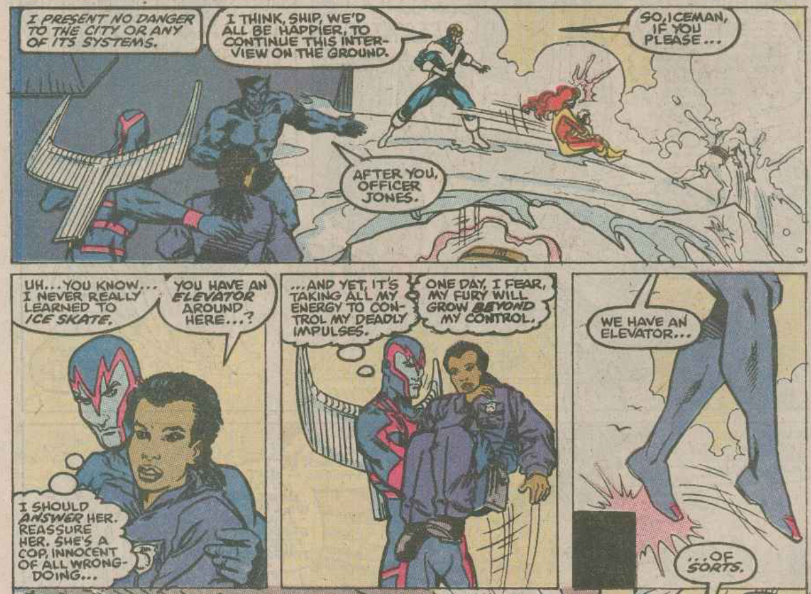 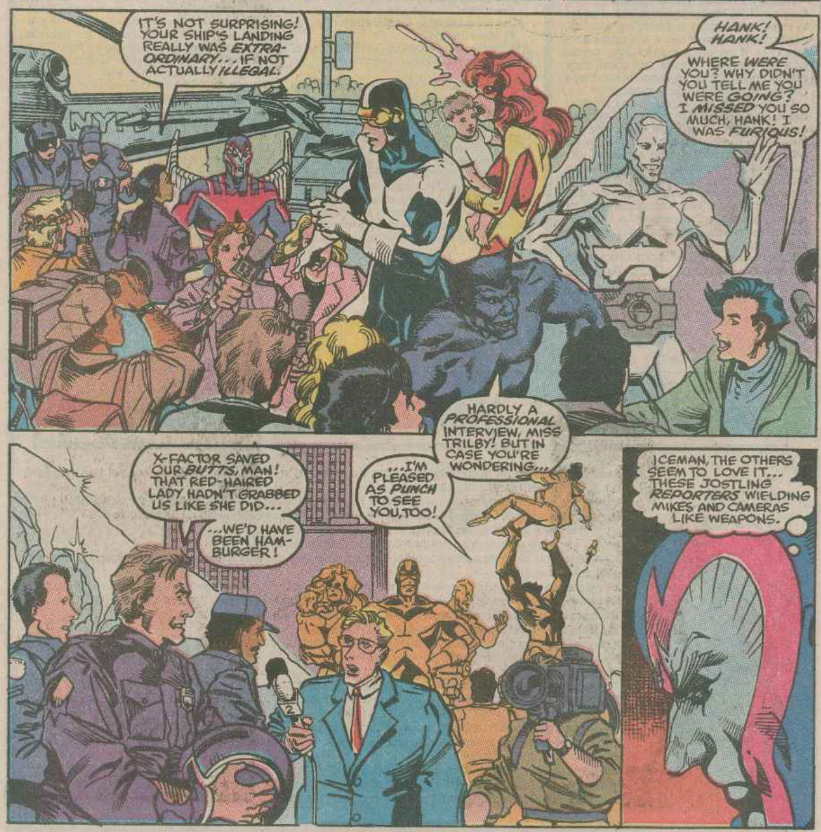 This issue ends with Apocalypse monologuing about his plans for Caliban and how he will bring about unity amongst mutants in the face of his ferocity. Pretty much none of what Apocalypse is blathering on about ever really comes to fruition. 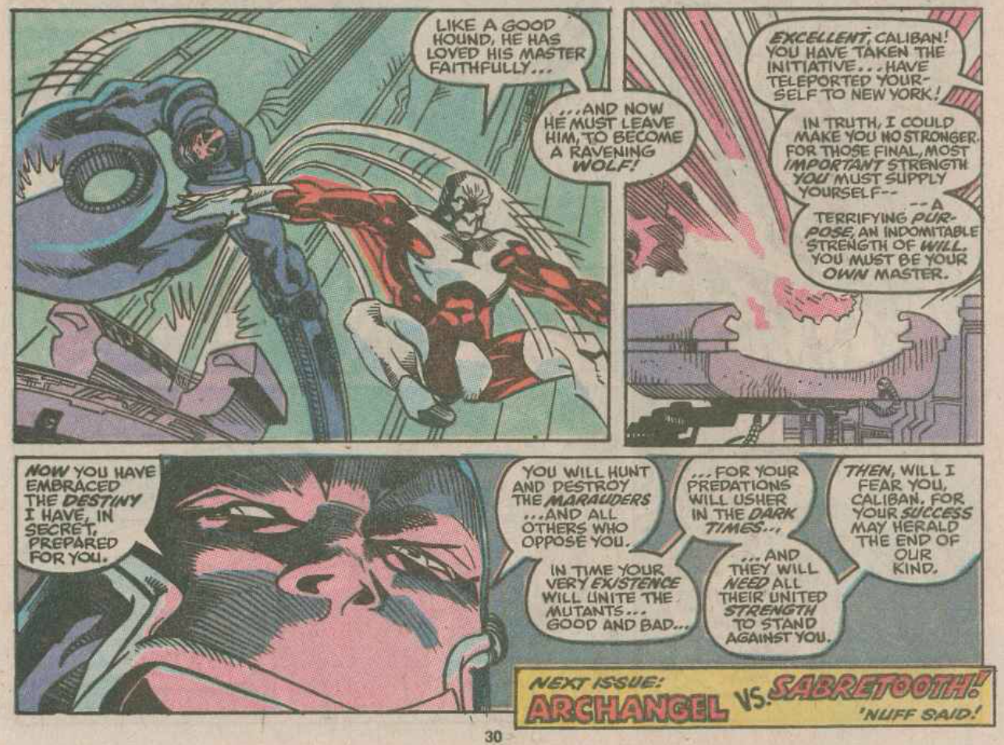 Sabretooth pops up in this issue, hunting down surviving Morlocks. This is the first time we've seen him in the present, on panel, in an X-book since his brief appearance in New Mutants #75 (between that issue and this one he appeared in a pair of Amazing Spider-Man issues).

This issue introduces a pair of Morlocks, Chicken Wing and Mole. The former is killed by Sabretooth, the later befriends Opal and will stick around for a few issues. 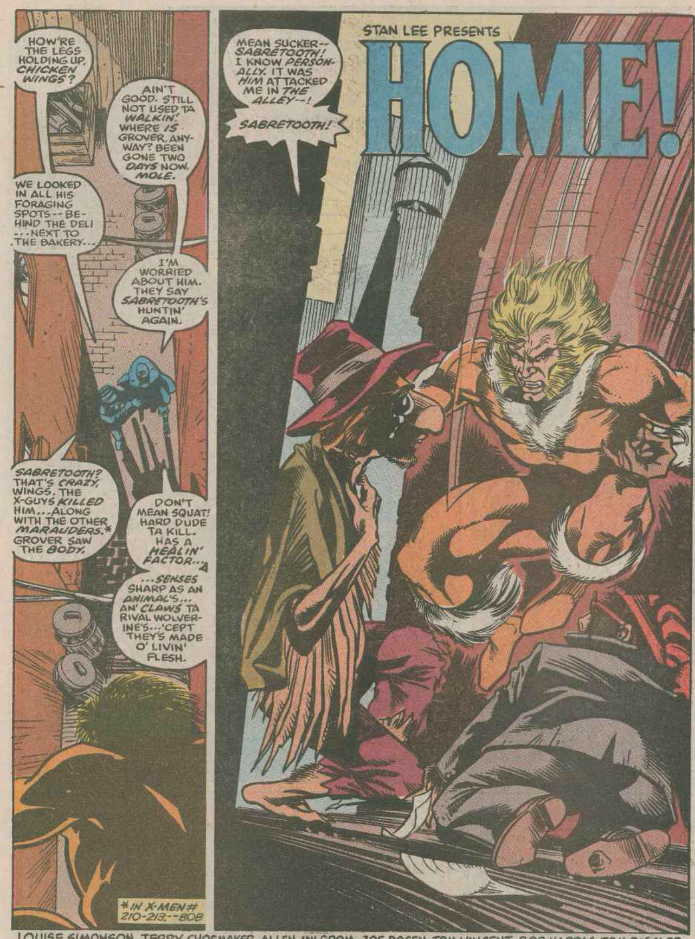 Terry Shoemaker provides the art for this issue, and while I don't think he's ever named the official regular artist for the book, of all the various fill-ins between now and Jon Bogdanove's brief run he is the most ubiquitous.

A Work in Progress
Apocalypse has no issue with the Marauders, as they do the work of culling the strong from the weak, which makes sense. 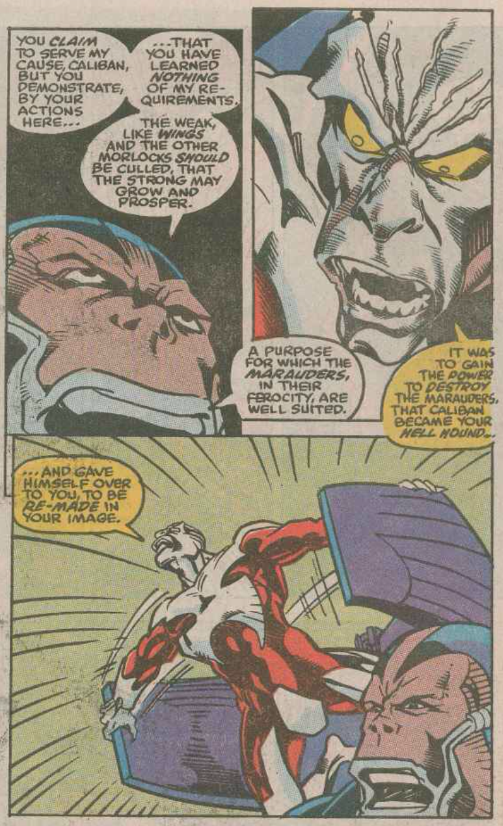 Archangel notes that though he lives, Apocalypse did kill the wealthy playboy he once was. 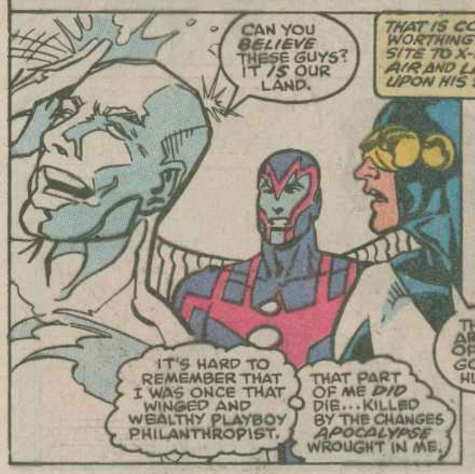 In addition to souping up Caliban's strength, speed, and endurance, Apocalypse has also modified Caliban's power such that he can absorb the psionic energy created by fear and use it against his enemies. 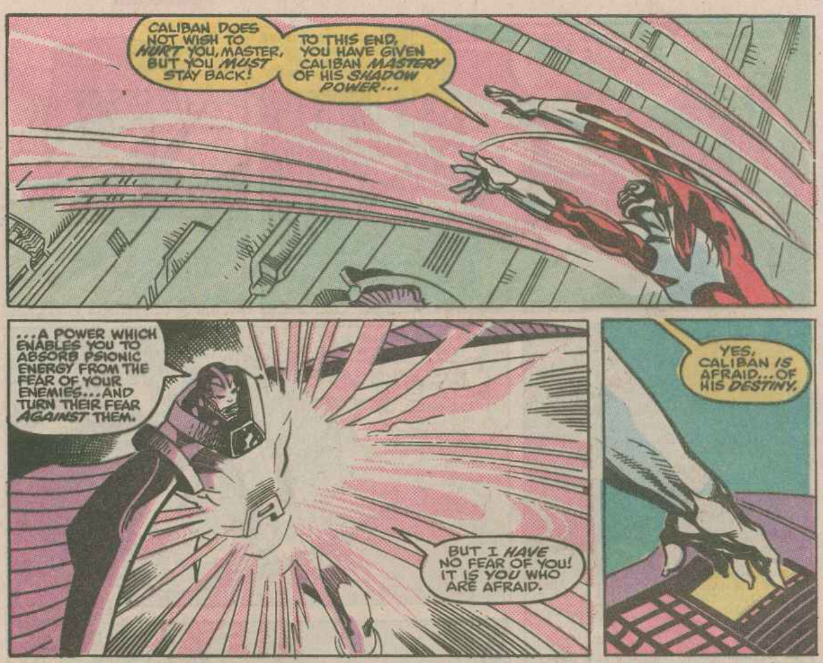 Teebore's Take
After eight issues on an alien world and a few before that puttering around in London, X-Factor arrives in New York for the first time since "Inferno", finally in a position to do once again do something with their role as the public mutant heroes. To that end, this issue sees Ship transform himself into a massive skyscraper, once more giving X-Factor a permanent, New York-based headquarters. In the process, Simonson begins to lay the groundwork for the next dozen or so issues of the series (give or take crossover tie-ins). More importantly, with the introduction of Opal Tanaka and Charlotte Jones and the return of Trish Tilby, Simonson is broadening the supporting cast of the series, which will help take some of the focus away from Scott and Jean while returning soap opera elements to the series, something which had once helped X-Factor stand out in its early goings. While the main plots over the next stretch of issues leading up to "X-Tinction Agenda" are pretty hit or miss (and the art will consistently "miss"), the interpersonal relationships that develop in that time provide some redeeming qualities to this latest era of the series.