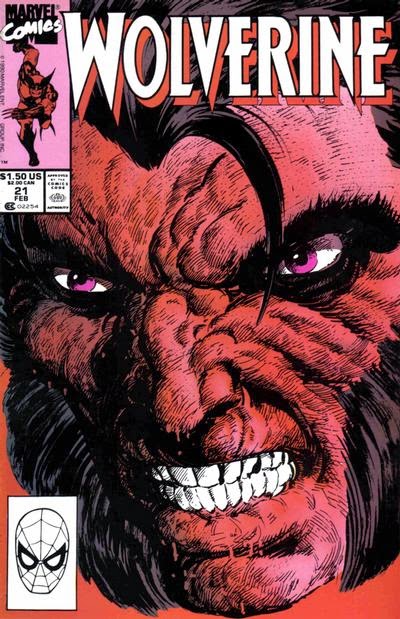 Plot
In Australia, the X-Men worry about Wolverine, with Psylocke able to sense his location but unable to read his thoughts. In Tierra Verde, Geist leads a search party through the jungle, ignoring La Bandera and the escaped prisoners to focus on Wolverine. However, Wolverine is suffering from the effects of the tainted cocaine, and though Sister Salvation is able to use her power to help him, the respites are brief. Meanwhile, La Bandera leads her group through the jungle, where they encounter a group of natives. Elsewhere, as Roughouse and Sister Salvation hide from Geist, Wolverine hallucinates that he's in World War II-era Germany fighting Nazis. After being injured in the hallucination, he sees Sister Salvation, who tells him only he can save himself. The hallucination continues as Wolverine attacks Geist, who is attending Adolf Hitler, but when he slashes open Geist, a creature called Spore spills out, encompassing Wolverine. 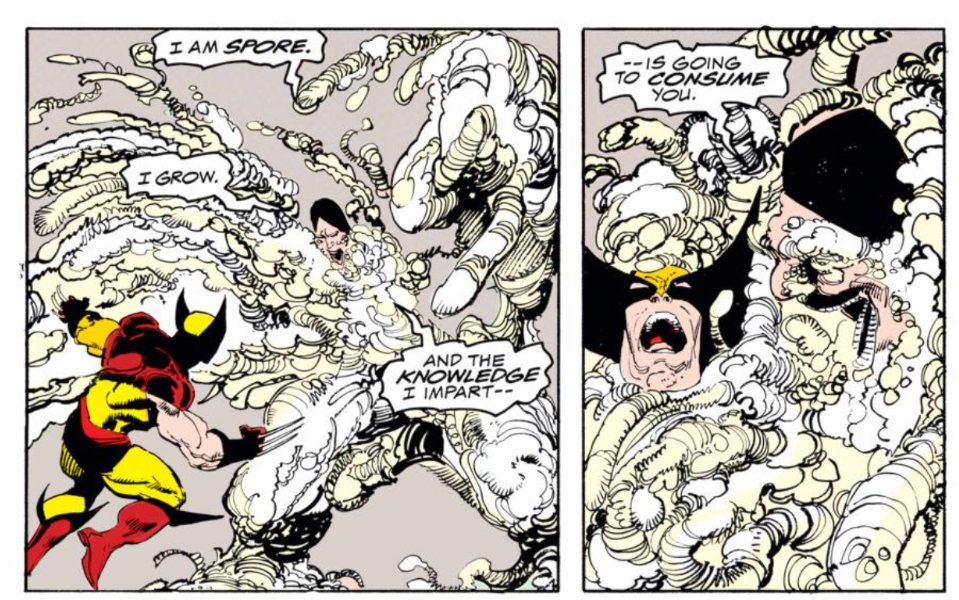 Spore explains that he was created to be the ultimate weapon in the Deviants' war against the Eternals but the Celestials found it unworthy and reduced Spore to the primordial slime from which it grew. But Spore persevered, eventually finding life in the crop of cocaine planted in the soil where it lay dormant, and from there, the people that used it. Though most bodies couldn't survive having an alien being growing within them, in Wolverine Spore has found a body that can survive his presence. Wolverine, however, realizing what Sister Salvation meant, marshals his healing fact and cuts out the disease, waking in the real world free of its influence. Just then, however, Caridad and Geist appear, having followed the trail surreptitiously left by Sister Salvation, who tells Wolverine she couldn't abandon her son.

Firsts and Other Notables
The X-Men (circa Uncanny X-Men #249) pop up in the opening page of this issue, as Psylocke worries about her inability to read Wolverine's mind despite being able to sense that he's in Central America. If I wanted to be pedantic, I'd point out that she should really need something like Cerebro to be able to use her telepathy across distances that vast, but I get that the point is to A. quickly establish the stakes of Wolverine's current situation and B. provide a brief check-in with the X-Men to show where this story fits in the overall chronology. 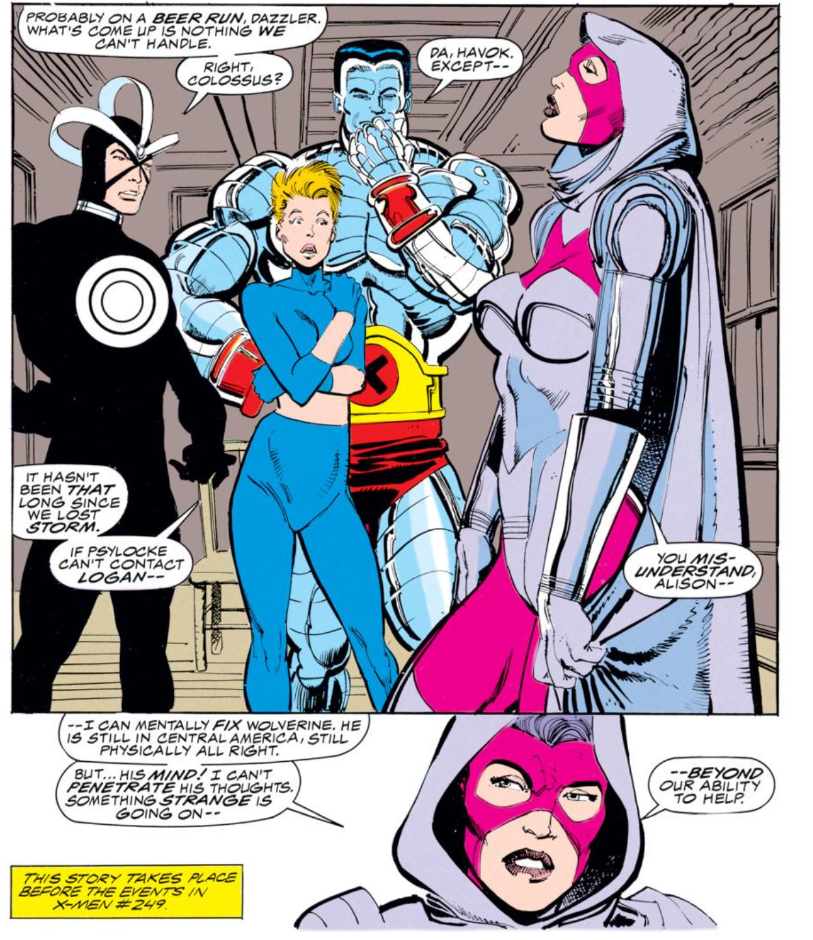 That said, it does muck with the chronology a bit, as we now have Wolverine's "Acts of Vengeance" story set well before Uncanny X-Men's "Acts of Vengeance" storyline, implying that the entirety of "Acts" covered much more time than seems reasonable (and that Magneto joined the Prime Movers before his conversation with Moira regarding his perceived villainy in X-Men #253).

Still, it's nice to John Byrne drawing the X-Men again for the first time in ages, however briefly.

This issue introduces Spore, am organism created by the Deviants eons ago during their war with the Eternals, which was judged a failure by the Celestials and seeming destroyed (the god-like Eternals and the monster-like  Deviants are long-lived, hidden races created by the Celestials as an offshoot of humanity. Not to be confused with the Inhumans, who were evolved from primitive man by the Kree). But Spore continued to exist in microscopic form, eventually taking control of the cocaine planted where it lay dormant, thus infecting the cocaine and then, the people who used the cocaine, explaining why this particular batch of the drug has the effects on people that it does. 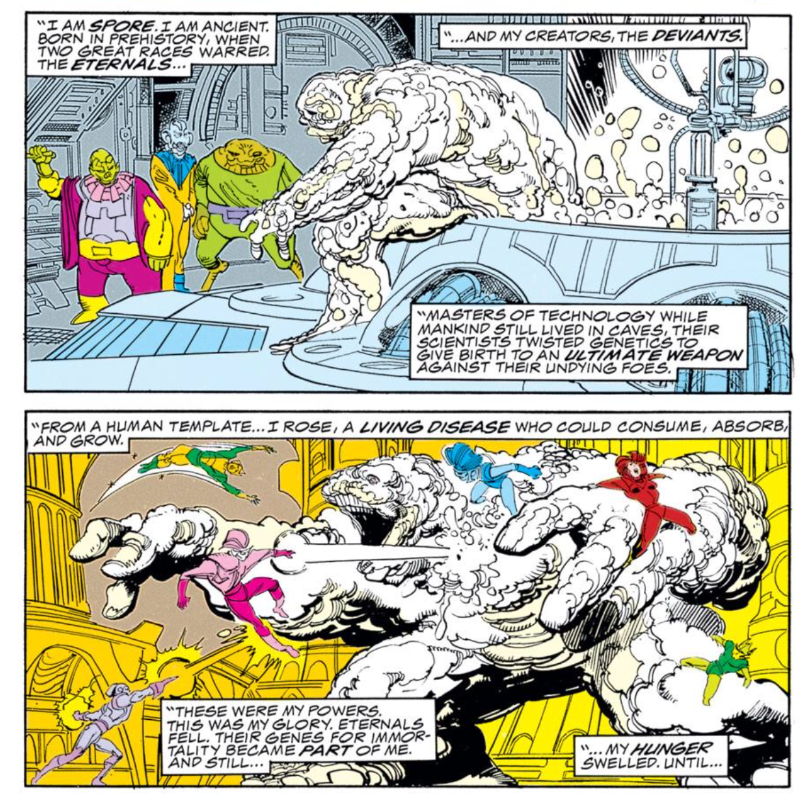 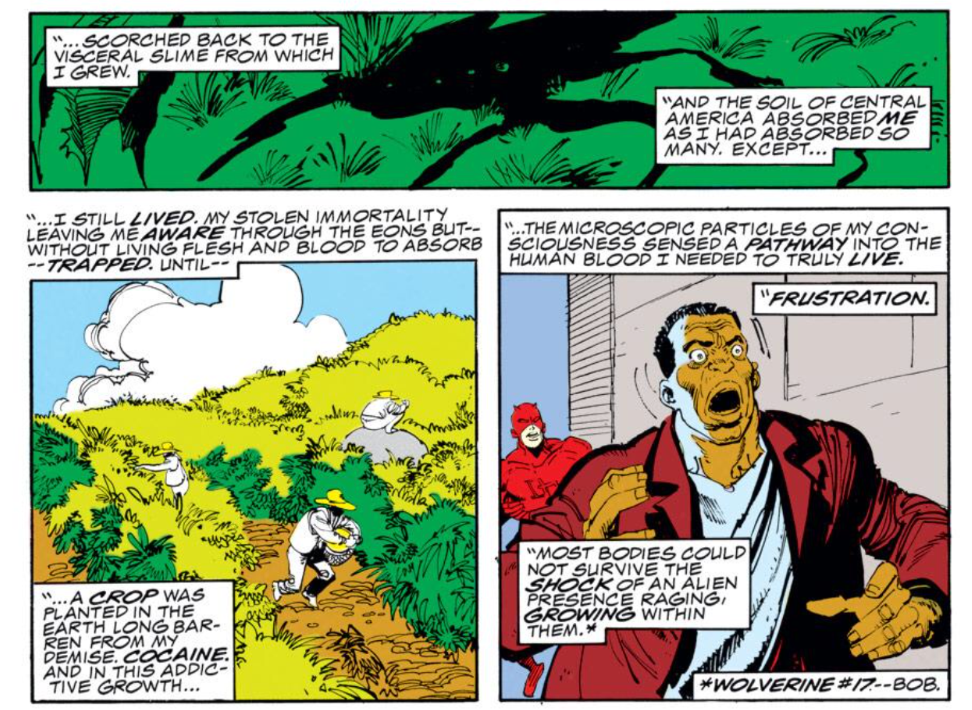 Spore reveals itself to Wolverine during one of Wolverine's tainted-cocaine-induced hallucinations, so I suppose technically, Spore hasn't officially appeared yet.

A Work in Progress
Wolverine was hit with darts containing the tainted cocaine by Geist last issue, though it was a subtle moment - I had to go back and double check that it happened (Geist talks about doing it, and then in the last panel you can see the darts in Wolverine's back).

Teebore's Take
This is probably the weakest issue of the Goodwin/Byrne run yet, as the bulk of it involves Wolverine having drug-induced hallucinatory battles with Nazis. Which, while fighting Nazis is always fun, doesn't exactly move the story or the character forward all that much. Towards the end though, the story takes an interesting turn, with the introduction of Spore, a Deviant-created organism that is revealed to be the cause of the tainted cocaine's special abilities and dangerous side effects. Seeing the Celestials, Eternals and Deviants pop up in a story that, thus far, has mostly been a pretty straight-forward superhero representation of an 80s action flick certainly makes for an intriguing development. It does fit the way Goodwin & Byrne have been expanding the story every couple issues, but it remains to be seen if adding the Celestials to the mix is one turn too far. For now, it's just the kind of thing to grab my waning attention.