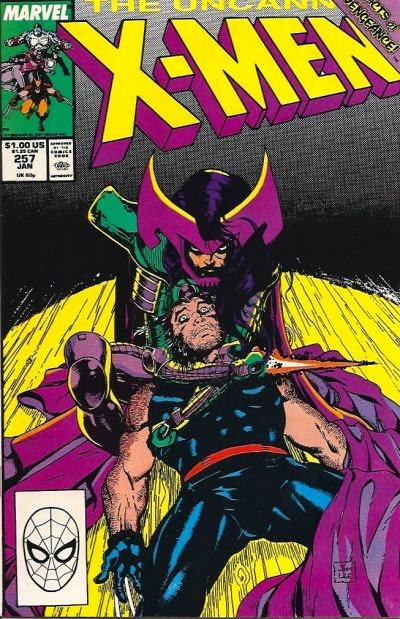 Plot
Psylocke, as Lady Mandarin, uses her newfound martial arts skills and the Mandarin's rings to unite the crime lords of Hong Kong under the Mandarin's control. Meanwhile, Wolverine, disguised as Patch, and Jubilee arrive in the city from Madripoor. In Cairo, Illinois, young Storm flees from Jacob Reisz, who has blamed the death of the doctor her killed on her, setting the local authorities after her. In Hong Kong, Wolverine & Jubilee arrive at the office of Rose, an old friend of Wolverine's. As Wolverine and Rose discuss the situation at hand, Jubilee is taken shopping by Rose's niece Ruth. At the Hand's island base, Psylocke trains and complains to Matsuo of the Mandarin returning to America. 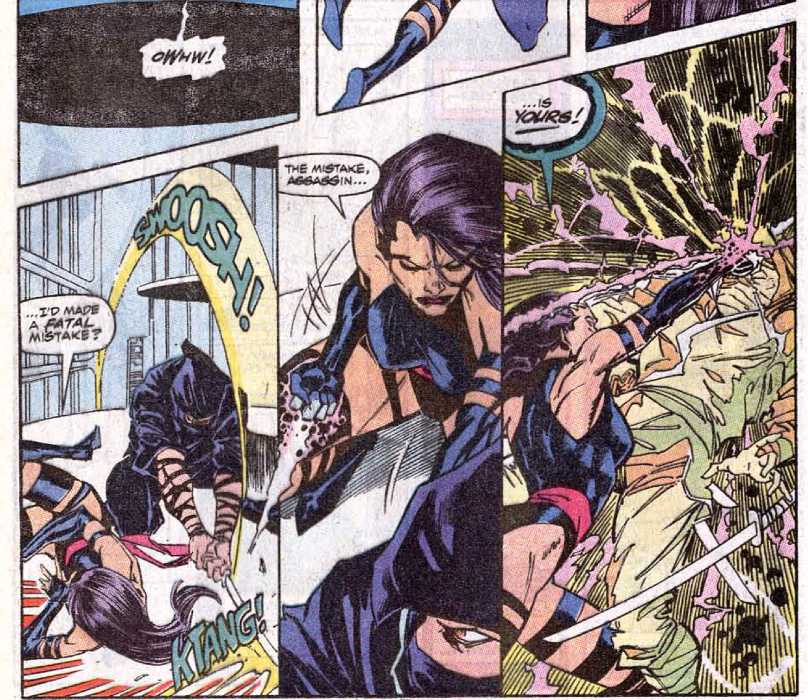 In Hong Kong, Ruth and Jubilee are captured by unseen assailants while shopping. On Muir Island, Forge sets up a new defense system while Legion takes control of Polaris' mind. In Hong Kong, Wolverine, hunting for the missing Jubilee & Ruth, is attacked by Hand ninjas. Despite his weakened condition, he holds his own until Jubilee, controlled by Lady Mandarin, distracts him. Wolverine and Lady Mandarin battle, with Wolverine recognizing her as Psylocke just before she uses her psychic knife to knock him out, declaring that at long last the Hand will have its revenge on one of its greatest foes.

Firsts and Other Notables
Wolverine and Jubilee return to the series this issue, appearing for the first time since slinking away from the Outback town in issue #253. Wolverine is still recovering from his injuries at the hands of the Reavers, with his healing factor overtaxed, a condition that will persist for the character pretty much through to the '91 relaunch. 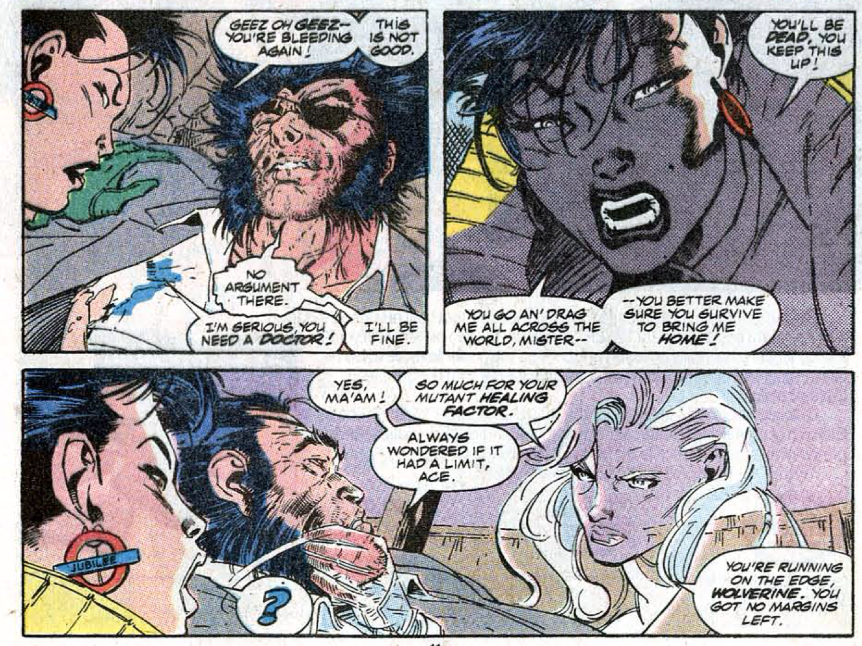 Jubilee, meanwhile, debuts her iconic Robin-inspired red shirt/green shorts/yellow raincoat/big sunglasses look this issue, the look she'll wear (with some variations) throughout the animated series and into her Generation X days. 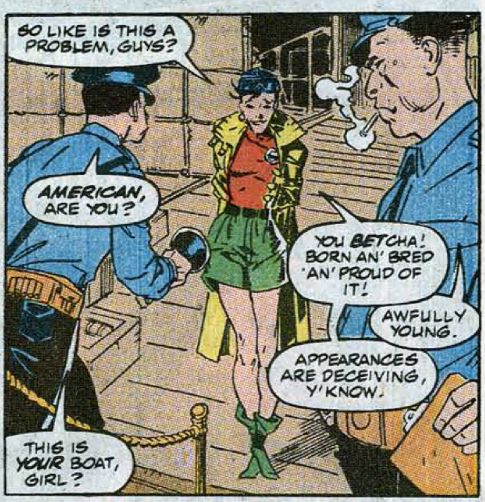 This issue marks the debut of Psylocke's psychic knife, the signature manifestation of Ninja Psylocke's powers. It is, as internet commenters love to mock, the focused totality of her psychic powers, though that particular Claremontism isn't used her; instead, it's simply said to be "the ultimate focus" of her psionic powers. It's also established that in addition to overloading an opponents mind and knocking them out, the psychic knife also forges a more direct, aggressive connection between Psylocke's mind and the mind of her opponent, making it easier for her to read the mind of someone, like Wolverine, with strong mental defenses. 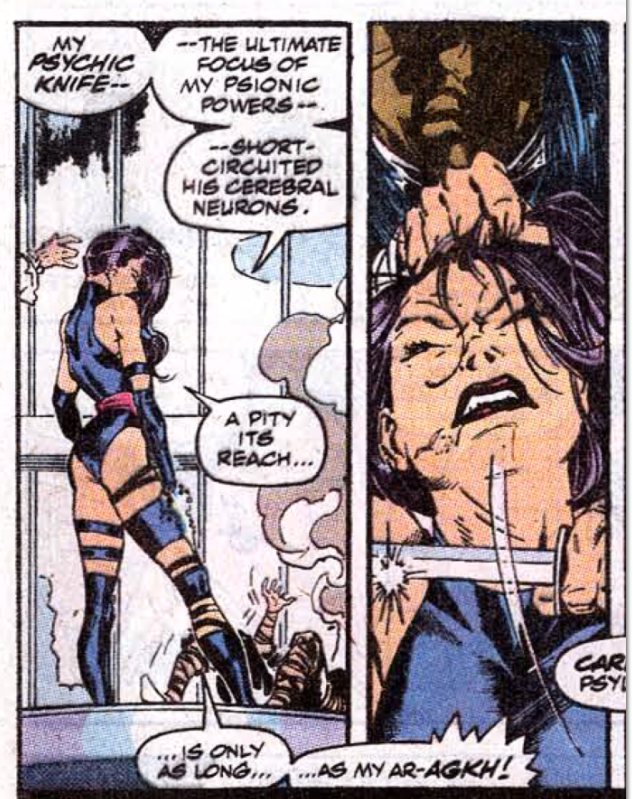 This issue is an "Acts of Vengeance" tie-in, though neither the Mandarin nor any other non X-villain appear in it. Psylocke notes to Matsuo that the Mandarin is back in America fighting super-heroes (most likely a reference to his upcoming appearance in Avengers #313), an act which is destroying his credibility amongst the Hong Kong crime lords.

We check in briefly with Muir Island, as Forge completes work on a defensive system for the island in the wake of the Reavers attack, and Polaris becomes possessed by Legion. 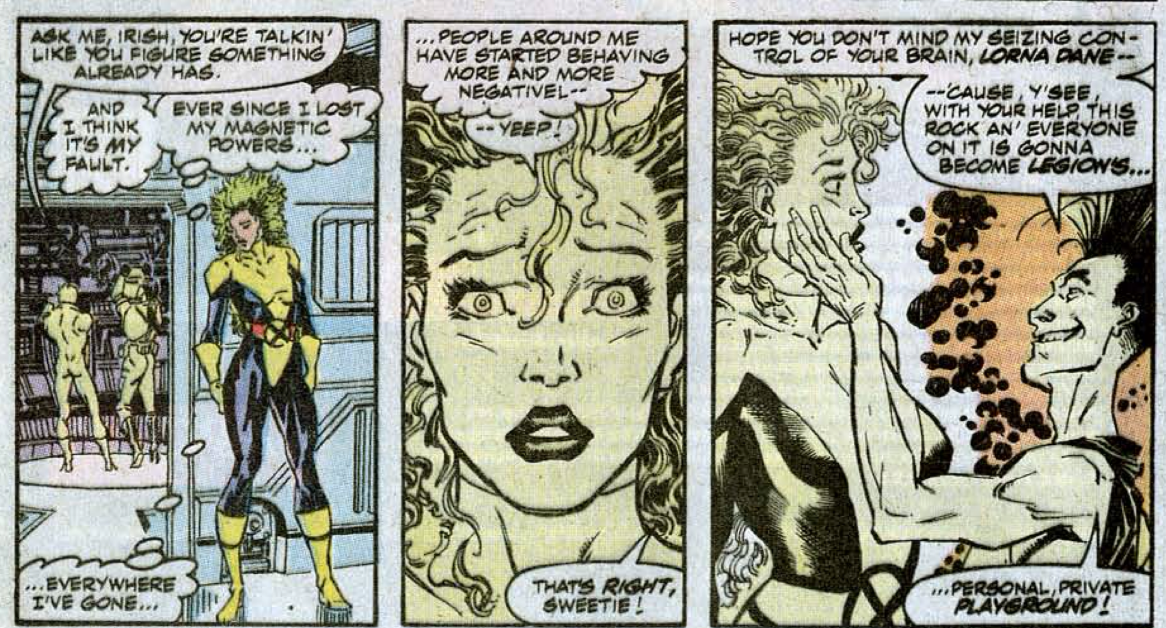 This is also the first appearance of Rose Wu, another old friend of Wolverine's (though she we will see again) who works for Landau, Luckman & Lake (the law firm with which Wolverine's had dealings in his solo series). Later stories suggest she has some shapeshifting abilities. She has a niece named Ruth in this issue who befriends Jubilee, but I don't think Ruth ever shows up again. 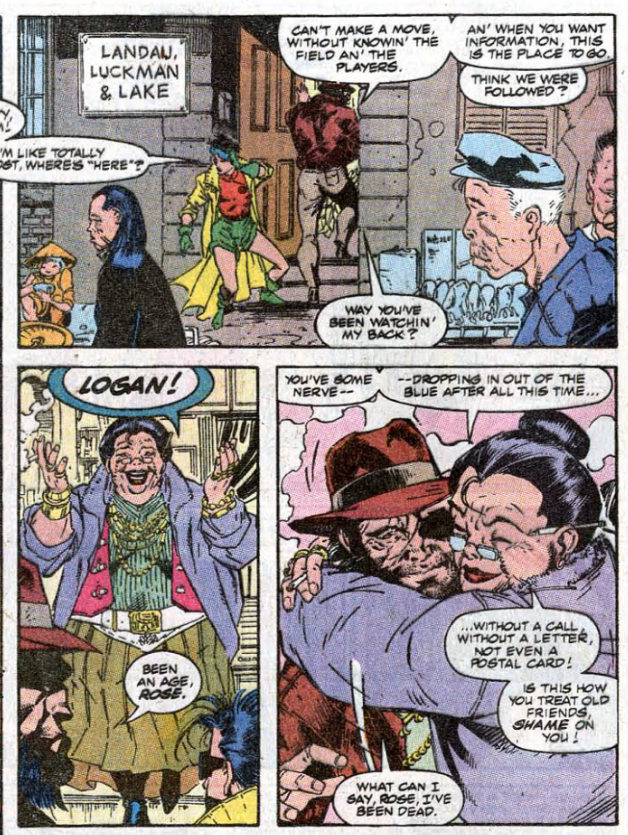 Similar to the picture of Wolverine and Chang (Landau, Luckman & Lake's representative in Madripoor) set in the past which Jessica Drew spotted in Wolverine #5,  in this issue Jubilee sees a picture of Wolverine with Rose in a futuristic "Blade Runner" city. I'm not sure if that's supposed to be Madripoor (whose Hightown is somewhat technologically advanced) or a hint at some kind of time travel story. Either way, it's never made clear/followed up on to my knowledge.

A Work in Progress
The Hong Kong crime lords mock Mandarin for his repeated defeats at the hands of the "lowliest of heroes". Just wait 'til the Iron Man movie comes out, guys.

Jubilee (rightly) mocks Wolverine's eye patch "disguise", a sign that perhaps Claremont has realized it was a dumb disguise. 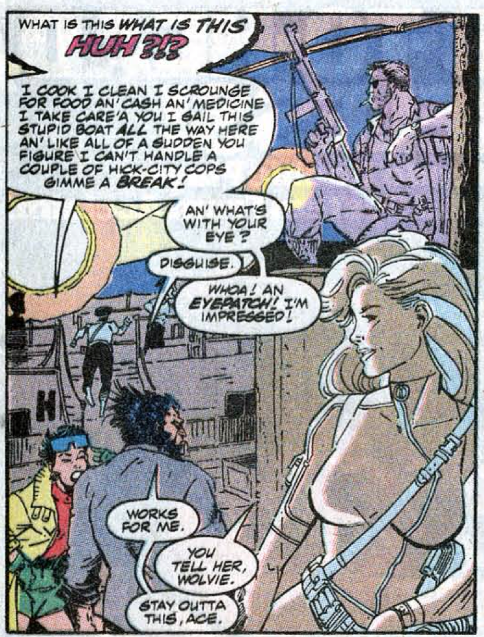 Wolverine is still hallucinating images of Carol Danvers and Nick Fury, and interacting with them regularly, as if they're physically with him.

Later, Wolverine battles Psylocke and the Hand wearing his "Patch" costume from his solo series, the first time he's been seen wearing it in the pages of X-Men. 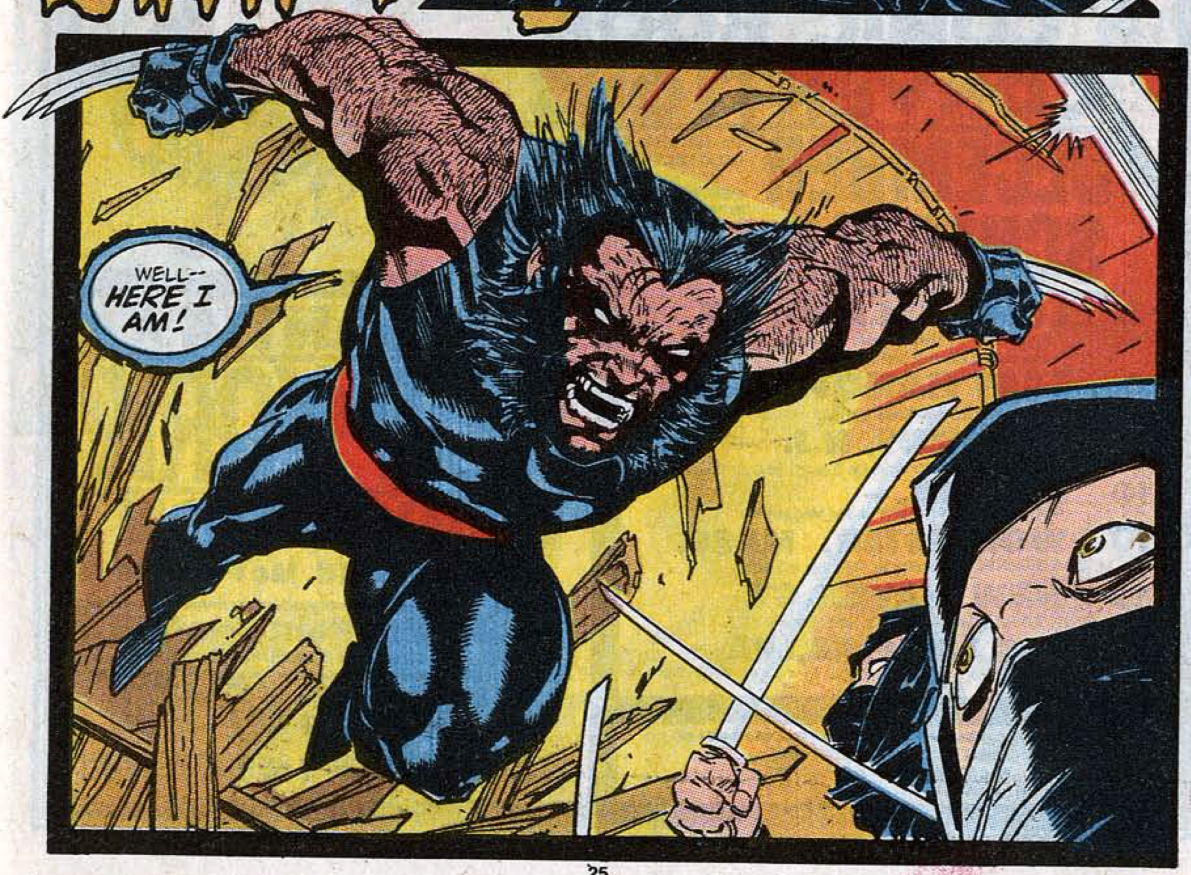 Young Storm continues to run from Jacob Reisz, who has, since issue #255, taken Dr. Shen under his control. 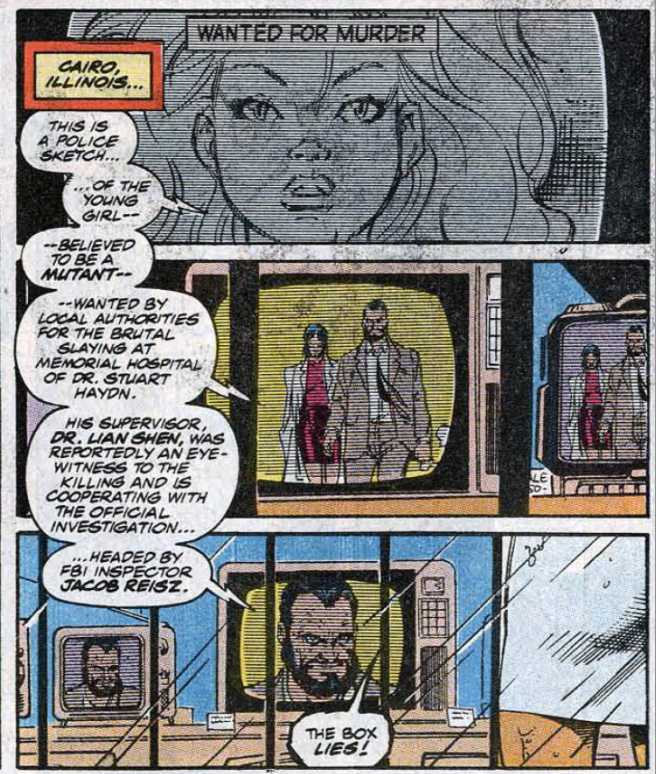 Wolverine refers to Jubilee as his lifeline, an indication of just how strong their bond has becomes since last we saw them. 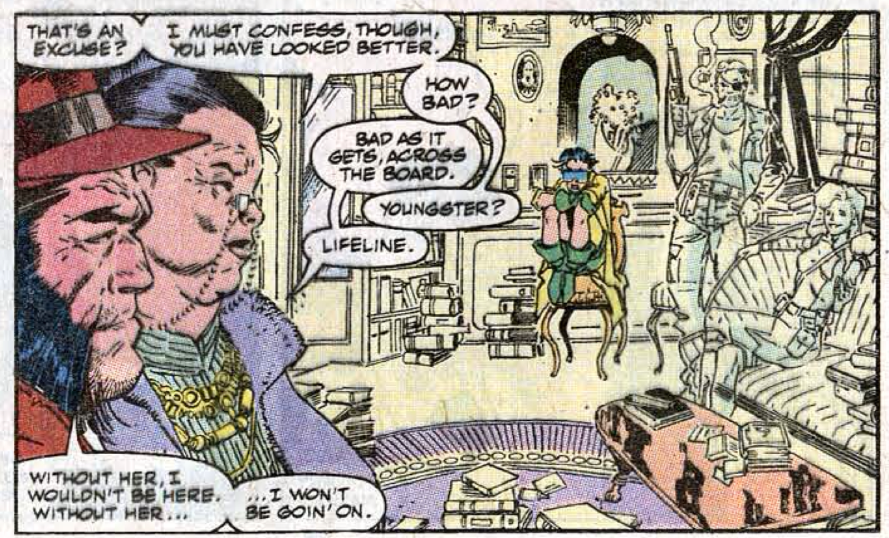 Banshee, concerned over Moira's strange behavior and the general atmosphere of Muir Island of late, asks Forge to build a "backdoor" into the security system, so he or Banshee can access the island undetected, if need be. 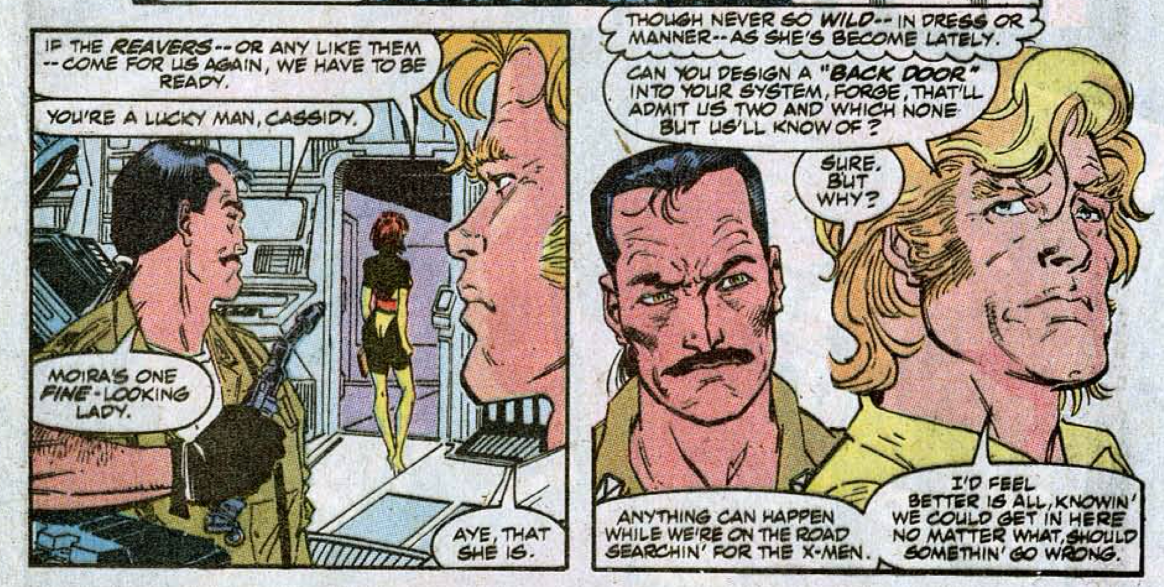 Psylocke once again notes that Jubilee's thoughts are slippery, making it difficult to read her mind.

I Love the 80s
Wolverine's blood is colored blue, presumably to keep the Comics Code placated.

Wolverine finds smoking to be difficult with his healing factor overworked, and seemingly gives up the habit, though he'll return to it eventually, before giving it up for good in the 00s. 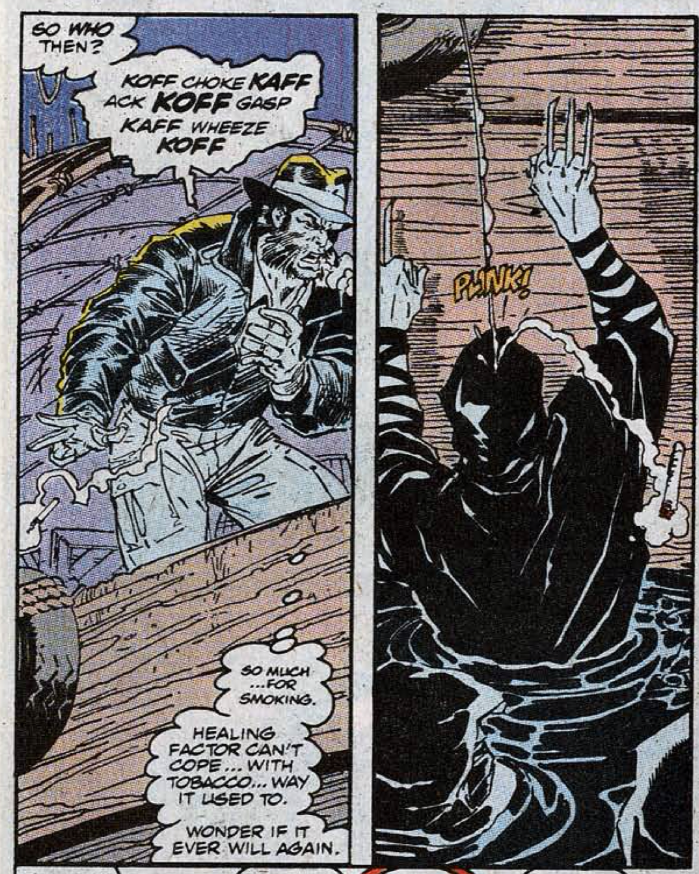 The Best There is at What He Does
Wolverine says he is someone for whom thought and action are one (his use of "a body" is also a Claremontism). 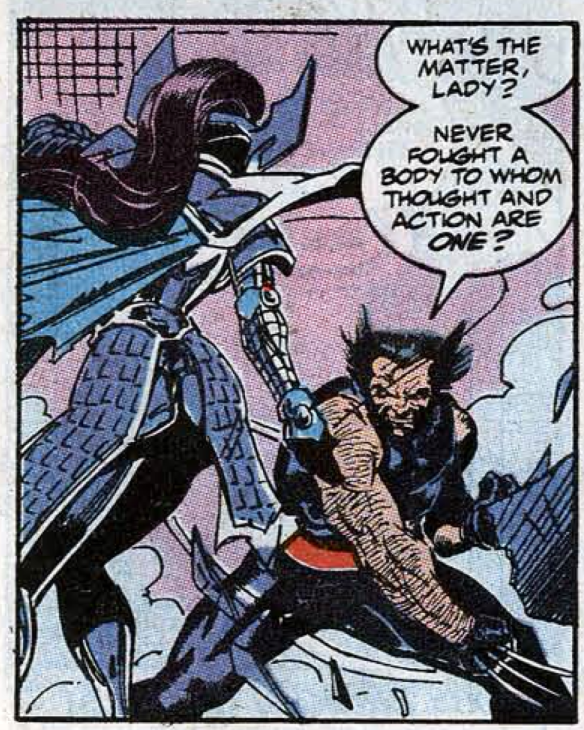 For Sale
This issue features an ad for, I believe, the first round of Marvel Masterworks hardcover reprints, a series of reprints that is (with a few trade dress changes along the way) still going strong today. 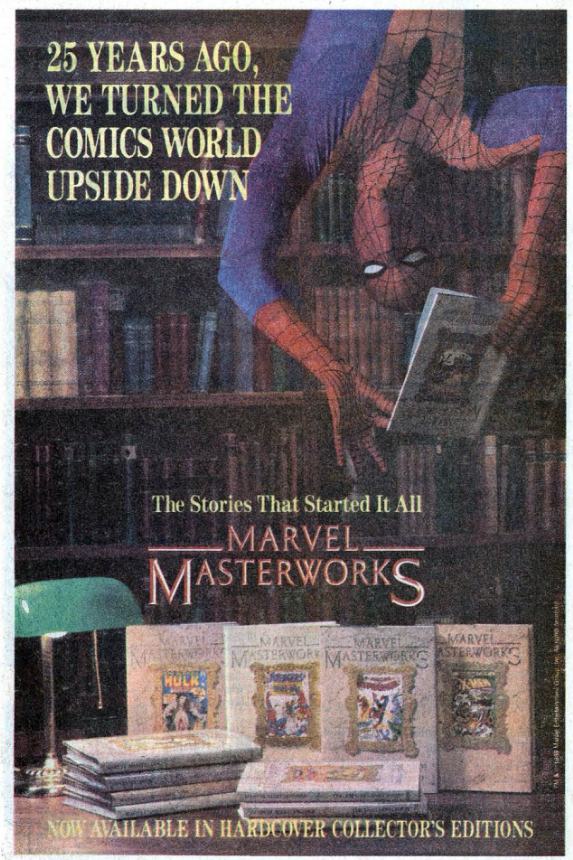 Teebore's Take
It's impressive how non-decompressed (compressed?) this story is: last issue, Psylocke was transformed into a ninja and pledged to the Mandarin, this issue, she unites the Hong Kong underworld in his name, Wolverine & Jubilee arrive in the city, Psylocke captures Jubilee and then fights Wolverine, setting the stage for the final chapter next issue. That's a lot of plot movement for one issue (nowadays, this three-parter would be stretched out to six parts, at least), but to Claremont and Lee's credit, none of it feels particularly rushed. Putting aside the convenience of Wolverine and Jubilee arriving in Hong Kong in the midst of Psylocke's power grab (Wolverine hand-wavingly says it feels like the right place to start their search for the missing X-Men, which, I guess it is), their re-introduction is well handled, with a clear sense of how their relationship has solidified since last we saw them, Wolverine's weakened condition is used to add tension to the narrative, and there's even time to advance the Muir Island/"Forge & Banshee search for the X-Men" subplots. In lesser hands, all of that would feel rushed or half-formed, but everything has room to breath, creating the sense that this story is, overall, much bigger than its three parts would suggest.

Next Issue
A pair of conclusions (finally) this week, in New Mutants #85 and X-Factor #50. Next week, "Acts of Vengeance" Part 3.