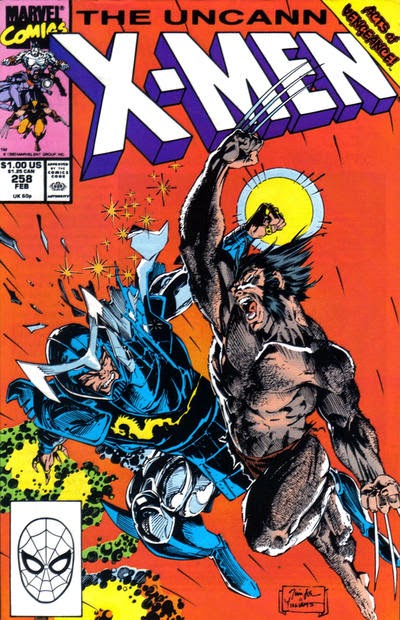 In a Nutshell
The Hand attempt to brainwash Wolverine.

Plot
With Wolverine locked in a sensory deprivation tank, Psylocke telepathically enters his mind, attempting to mold him in the image of the Hand. But the process affects some of the Hand guards, and in the ensuing confusion, Jubilee escapes from Matsuo, only to run right into the returning Mandarin. On Muir Isle, Banshee tests Forge's new security system as Lorna attempts to escape from the cell in which Legion has trapped her. In Hong Kong, Wolverine fights back against Psylocke, forcing her to use her psychic knife to take control of his mind. But doing so causes her to cry out in agony. As Wolverine awakens in the tank, Psylocke is somehow attacked by the phantoms of Nick Fury and Carol Danvers, who then turn their guns on the Hand ninjas, leaving Wolverine to face off against Psylocke. 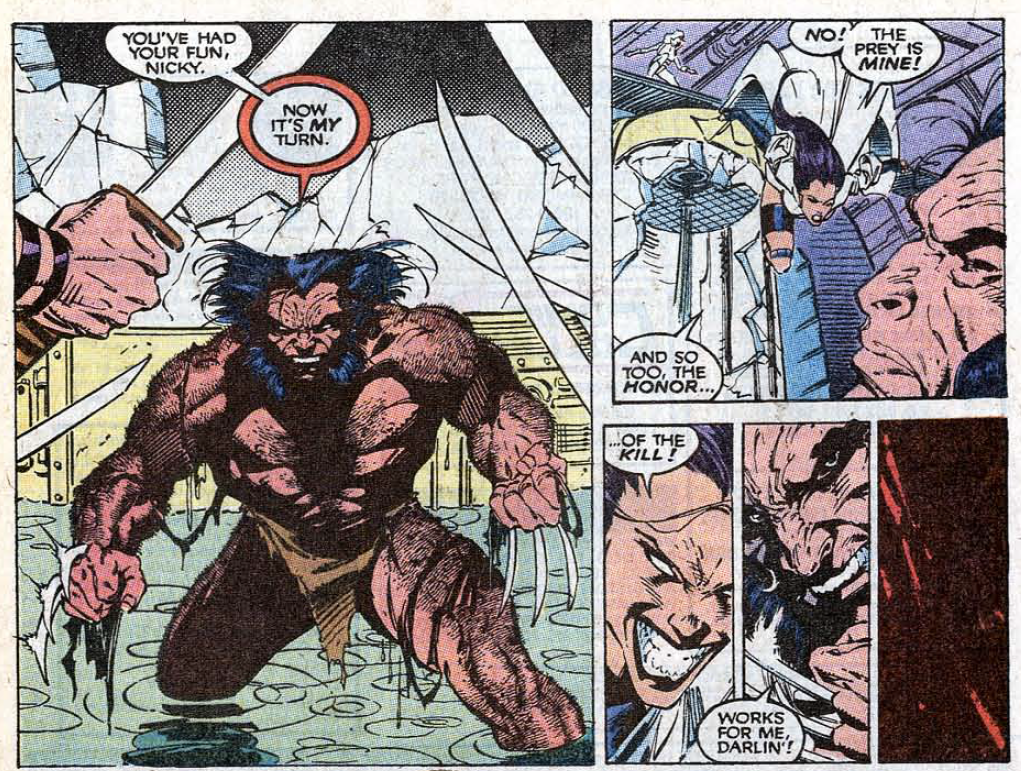 Later, Psylocke arrives at the Mandarin's villa, where's he taken Jubilee, and presents the body of Wolverine, telling him he'll be of no more use to the Hand. The sight of Wolverine seemingly dead causes Jubilee to trigger a massive explosion, giving Psylocke an opening to attack the Mandarin. He battles her to a stand still, but then Wolverine, alive and well, pops up behind him, claws at his throat, and the two agree to part ways peacefully. Later, Wolverine and Jubilee are joined by Psylocke as they sail away from Hong Kong, Wolverine explaining that when Psylocke entered his mind, it shocked her back to her senses. Jubilee remains distrustful of her, however, and Psylocke herself asks Wolverine how he can trust her when she's not sure she can trust herself. To which he says he has no choice.

Firsts and Other Notables
With Psylocke throwing off her Hand conditioning and joining up with Wolverine and Jubilee, this issue marks the completion of the final set of characters the book will rotate in and out of focus during the Non Team Era.

This issue involves Matsuo and the Hand attempting to do to Wolverine what they did to Psylocke, brainwashing him into becoming their assassin (which Matsuo feels is suitable revenge on someone who has been such an enemy to the Hand). Obviously, by the end of the issue, Wolverine has resisted their efforts, but had Claremont stayed with the X-Men, one of his long term plans involved the Hand eventually succeeding in turning Wolverine into their assassin, having begun the process in this issue, at which point he'd spent a significant amount of time as a villain before dying. Much later Mark Millar basically did the same story in the pages of Wolverine's solo series, during the "Enemy of the State" arc. 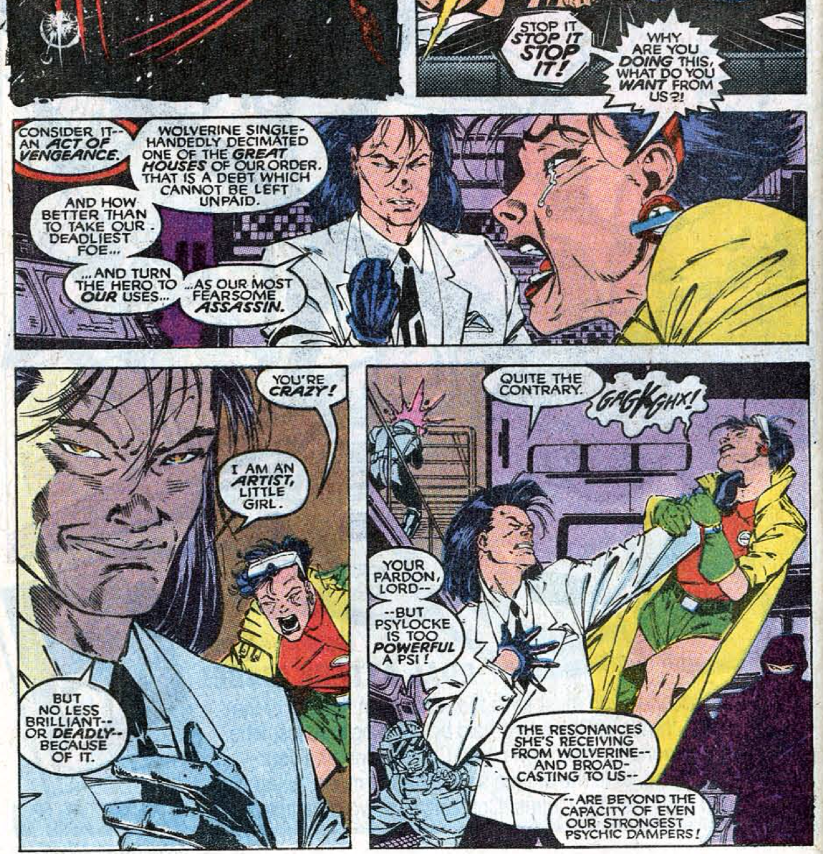 Banshee and Forge adopt the unified yellow and blue X-uniforms this issue, and both will remain the characters default looks even after the '91 relaunch, when everyone else either gets a new, individualized costume or returns to their old individual look after wearing the uniforms for awhile. 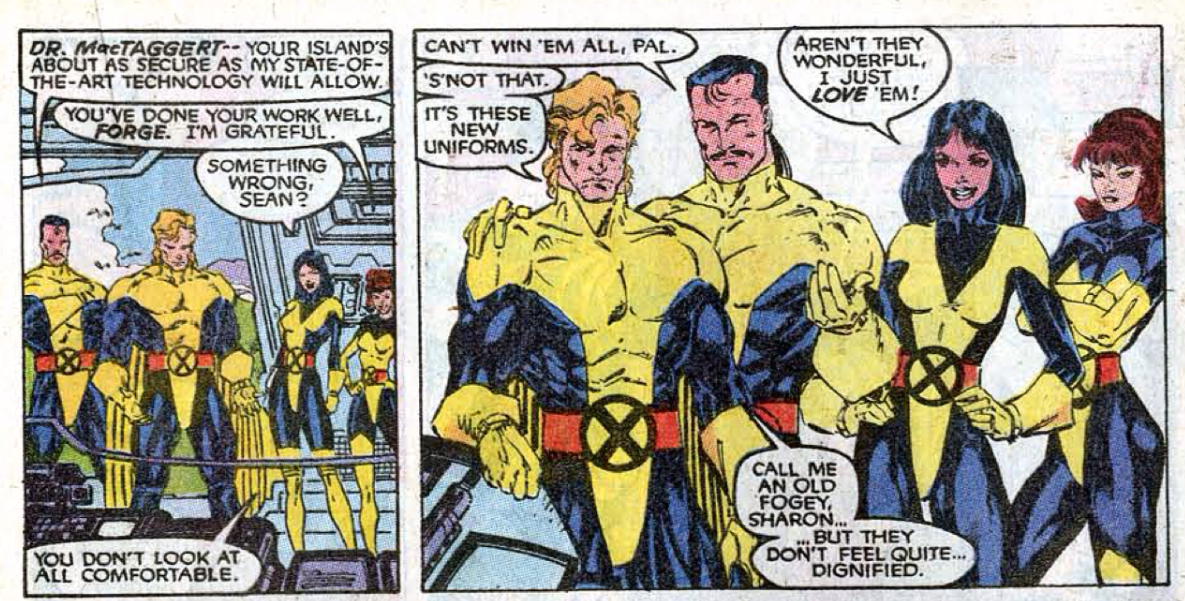 Legion has locked Lorna in Mutant X/Proteus' old cell, and it's revealed that thanks to Lorna, Jack Wayne, the evil personality within Legion, is able to access all of Legion's powers and be in control. 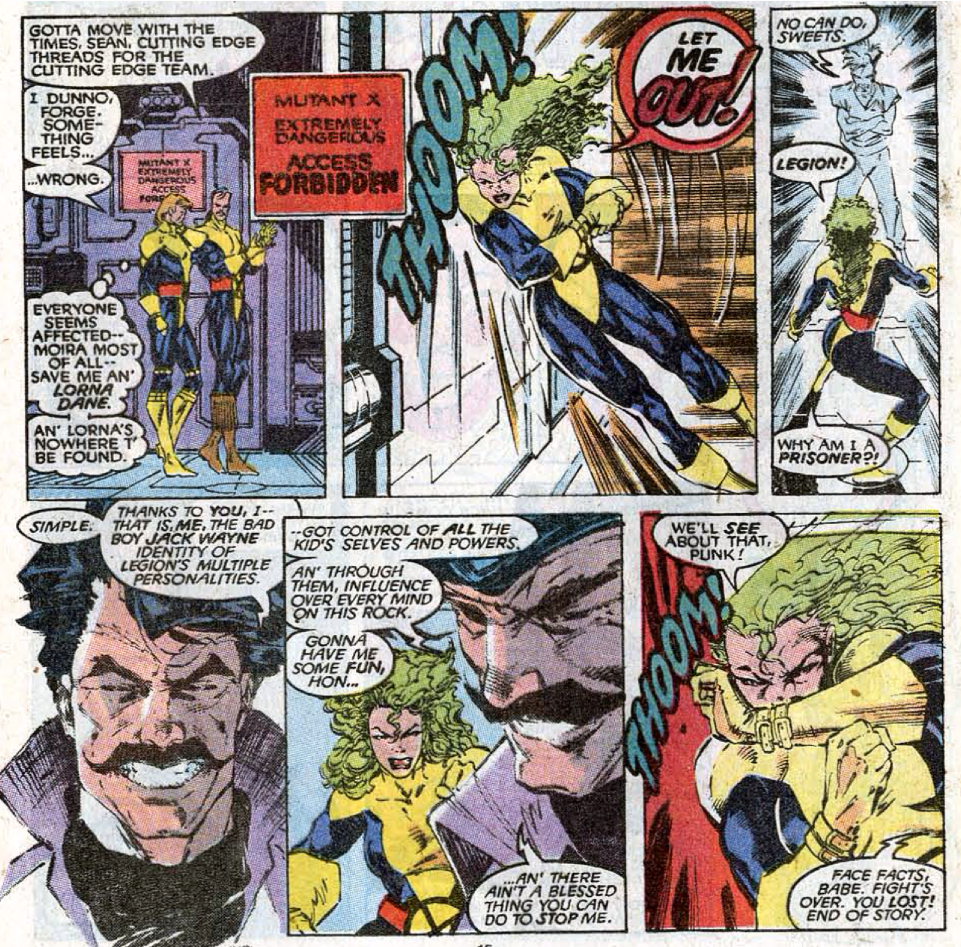 Jubilee is able to use her power to trigger a big explosion, larger than anything she's yet done, indicating just how powerful she has the potential to be, which will be a recurring beat for the character moving forward. 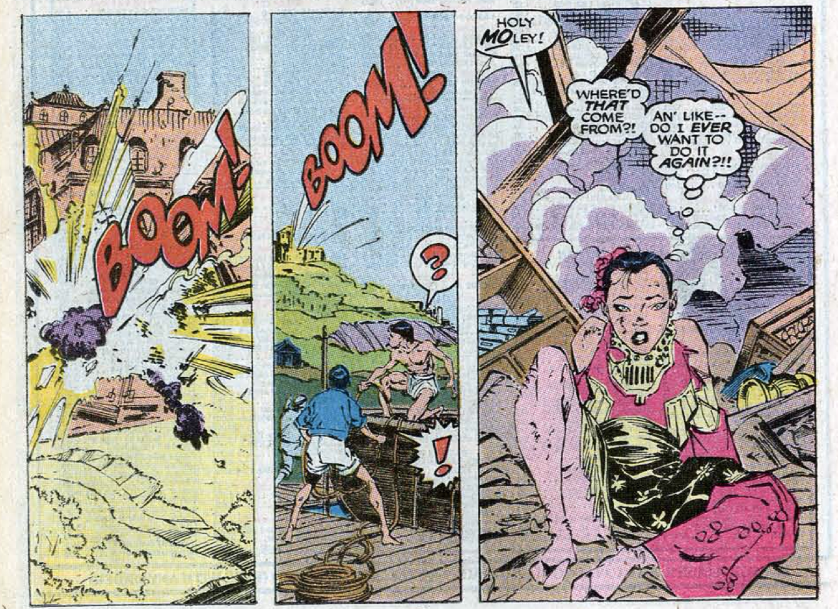 Similarly, Jubilee is (understandably) distrustful of Psylocke once she joins up with Jubilee and Wolverine, a feeling she'll continue to espouse during their time together. 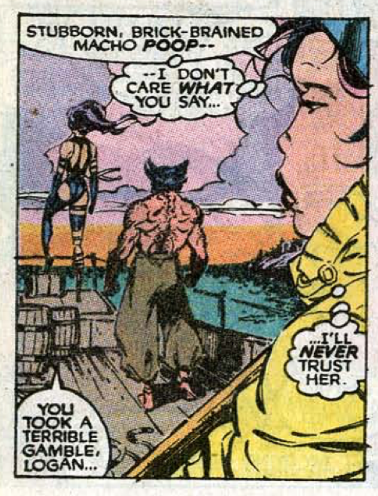 A Work in Progress
It's noted that both Wolverine and Psylocke remain invisible to detection from electronic devices.

The Mandarin is dismissive of Jubilee, saying she has been sullied by mongrel Western influences. 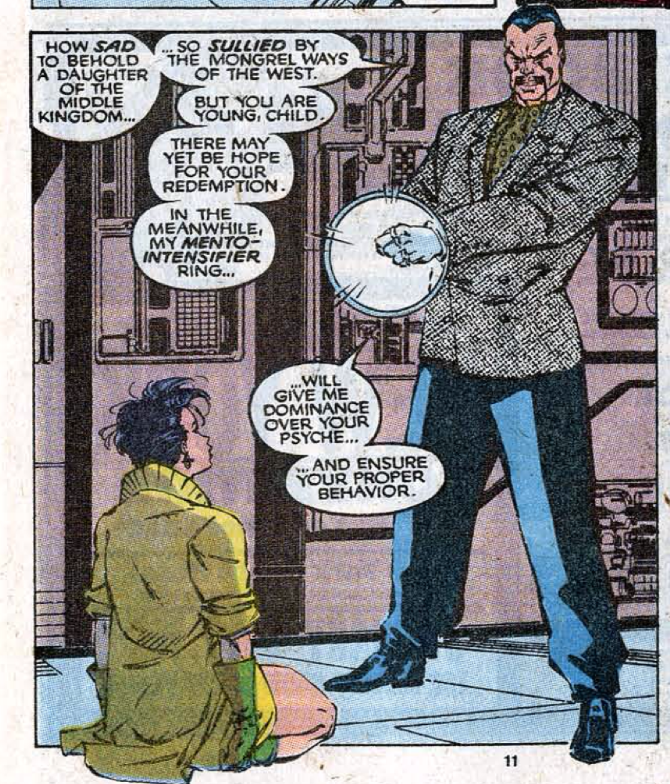 Claremont hangs a lantern on the randomness and abruptness of the plot resolution via Jubilee. 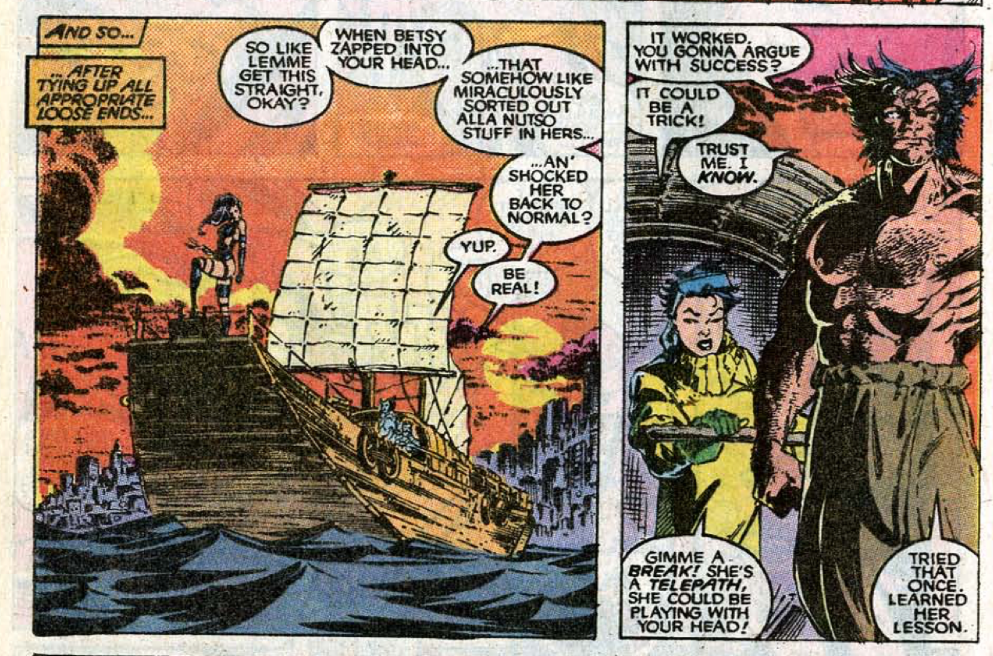 Wolverine says that his inner ghosts are now running free in his mind, to an extent that not even Professor X would likely be able to help him, which is part of what helped shock Psylocke back to herself.
. 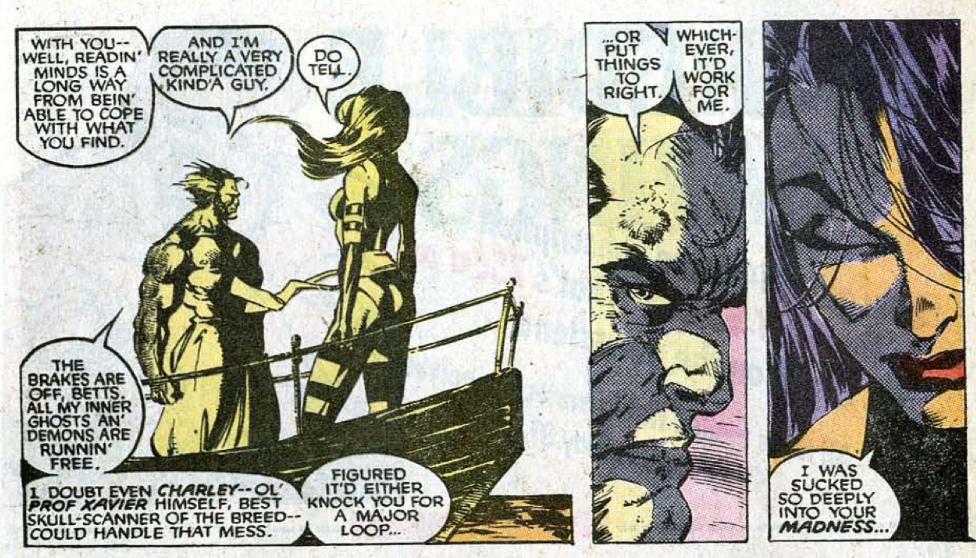 I Love the 80s
Wolverine asks the Mandarin if he's ever danced with the devil in the pale moonlight, another Batman '89 reference (followed by a Dirty Harry one). 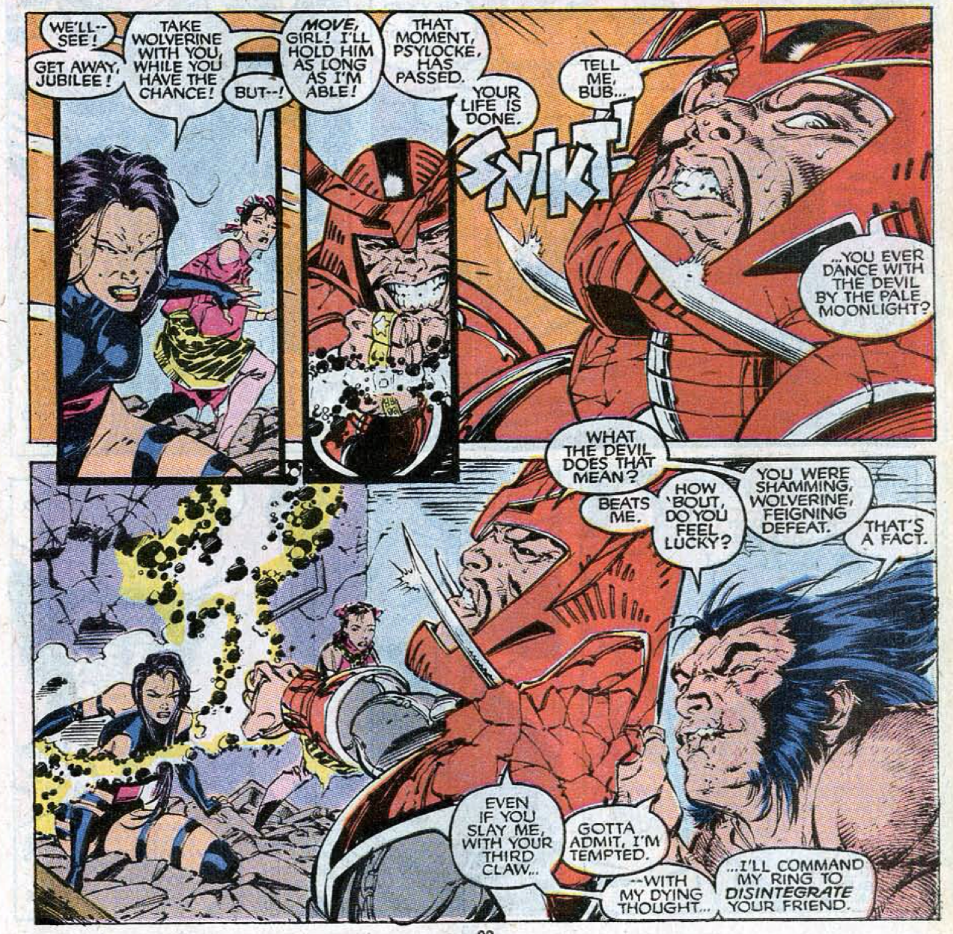 Claremontisms
At one point, "mask" is spelled "masque", though maybe that's just a lettering error. Psylocke' psychic knife is still just the "ultimate focus" of her abilities.

Claremont is maybe trying out some new terms, as "Menstat" and "Skull Scanner" are both thrown out at different times as synonyms for telepath; I don't believe either ever sticks.

Young Love
Wolverine is confronted in his mind by images of the women he's loved: Jean Grey, Mariko, and Yukio. Notably absent from that list: Heather Hudson, Silver Fox, every woman that's since been retconned as having been a love of Wolverine's life. 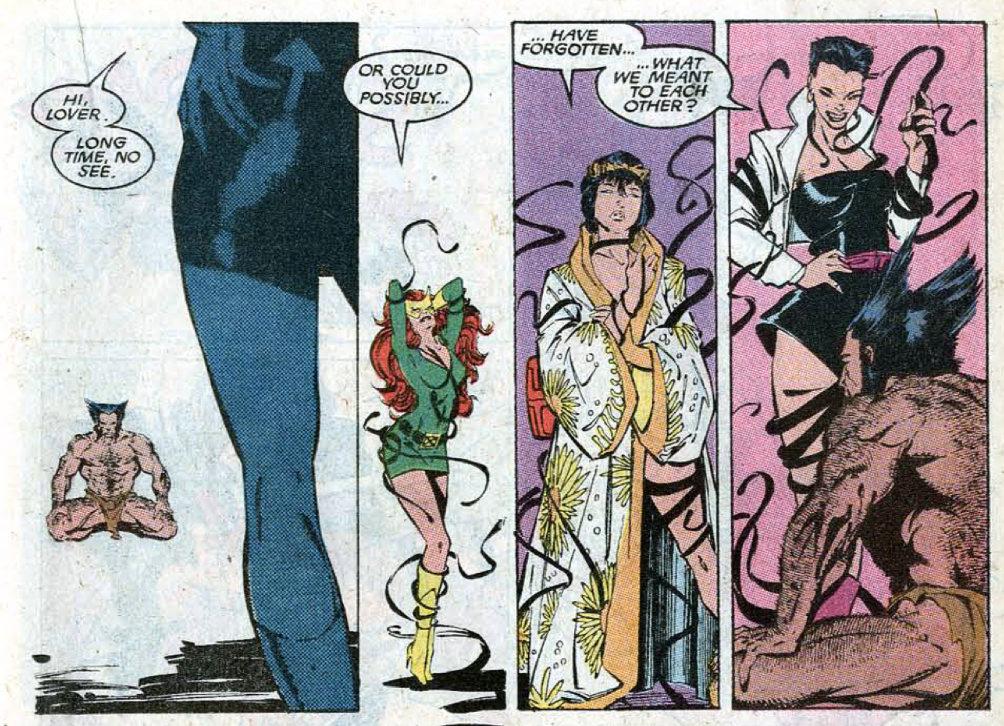 Teebore's Take
This issue brings to an end the three part "Lady Mandarin" arc, and the conclusion is a bit abrupt, with the exact mechanics of how Psylocke breaks free of the Hand's conditioning left to exposition at the end of the issue in order to better preserve the surprise of Wolverine turning up alive and Psylocke being herself. It also does nothing with the teases from issue #256 that Psylocke may have either secretly been in control of herself, or in the control of Mojo and Spiral, and there's definitely something problematic in the idea that it takes Wolverine's mind to snap Psylocke back to herself, robbing the central character of this arc of her agency, recasting her as someone rescued by Wolverine

But for all that, this is still a fun, reasonably well-constructed story. A tad abrupt is probably better than long-winded and decompressed, and while the full ramifications of Psylocke's transformation never really get the attention they deserve, that's more a failing of later stories/missed opportunities than of this one, which is chiefly concerned with the initial transformation and immediate fallout. The Lee art is, of course, a big part of that draw, injecting a ton of energy into the story, but Claremont also seems to be having fun, playing with some of his favorite tropes (physical transformation and mind control) outside the confines of the traditional team book structure and peppering the story with plenty of exciting, cheer-worthy moments. For all it's faults in execution, this story remains a highlight of the book's non-team era.