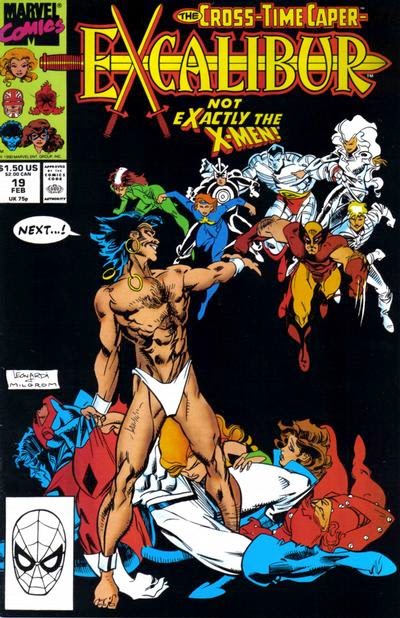 In a Nutshell
Meggan battles Jamie while Kitty ends up back on Earth.

Plot
Captain Britain attacks Jamie, but Jamie easily overpowers him. Nearby, Widget creates a portal, and when Jamie attacks Shadowcat, she dives through it. Meanwhile, the Dirty Angels arrive at Excalibur's train, while Phoenix, still recovering from Jamie's attack, telepathically awakens Meggan. Hoping to surprise Jamie, Phoenix uses her memories of the X-Men and Meggan's metamorphic abilities to enable Meggan to manifest the forms and powers of the X-Men. Elsehwhere, Kitty awakens in a strange bedroom and realizes she's in Jamie's house while Meggan, manifesting Wolverine, stalks Jamie. He sets Captain Britain on Meggan, but she uses Dazzler's powers to knock him out. Back at Jamie's house, Kitty reads through a stack of newspapers and realizes Widget has managed to teleport her to Excalibur's home Earth. 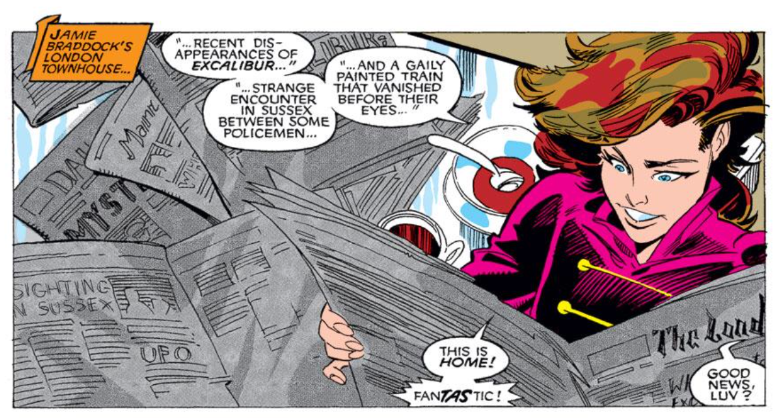 Then she hears a sound like Dazzler's blast coming from upstairs and investigates. Elsewhere, Meggan shifts again, blasting Jamie with Havok's power, as Kitty discovers a different Jamie sitting before a fire, playing with figures of Excalibur, his body manifesting the effects of Meggan's attacks. When Meggan, as Rogue, tries to absorb Jamie's powers, he instead takes hers and attacks Phoenix through their shared connection. Just then, the rest of Excalibur and the Dirty Angels arrive, breaking the connection, while Kitty orders the Jamie sitting before her to go to bed. Her gamble paid off, he goes to sleep, and when he does so, the other Jamie and the world around Excalibur fades away. However, Kitty is unable to go back through Widget's portal to her teammates, and despondently goes alone to Captain Britain's townhouse, watched by Courtney Ross, who declares she will make Kitty hers.

Firsts and Other Notables
Consummate fill-in artist Rick Leonardi, who has previously contributed to New Mutants and spelled Marc Silvestri on Uncanny X-Men, steps in for the absent Davis this issue. It is, not suprisingly, a significant step up in terms of quality from the previous issue.

Kitty interacts with Emma, the housekeeper at the Braddocks home, though I believe she died at some point during Captain Britain's series. It's unclear if Jamie somehow resurrected her, or she returned some other way. 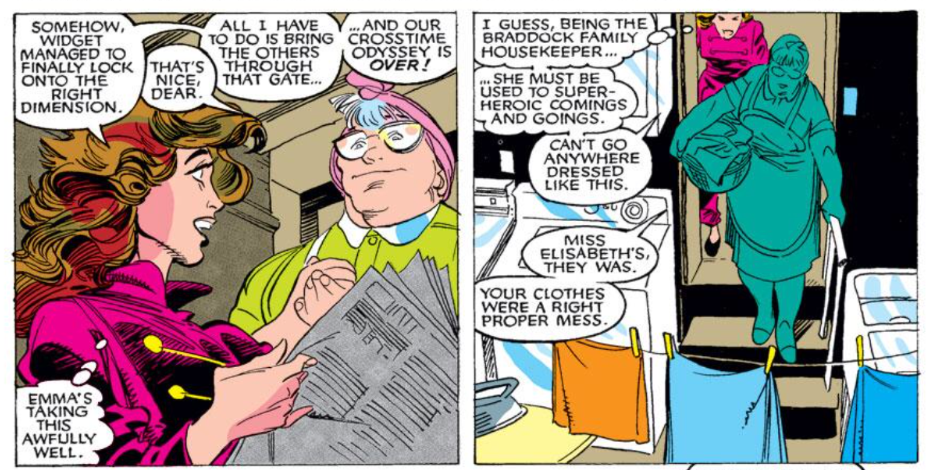 When Kitty awakens in Braddock manor, she's dressed in Asian-inspired clothing which is later said to be Psylocke's, presumably a suggestion that Psylocke had an affinity for the culture even before her recent transformation at the hands of the Hand.

A Work in ProgressThe issue opens with a series of narrative captions that spell out the concept of "cross-time" for really the first time in this storyline.

Meggan, while mimicking Wolverine, notes how her senses are heightened, but she's doesn't automatically absorb all the heightened information, which is a nice explanation of how the whole heightened sense thing works. 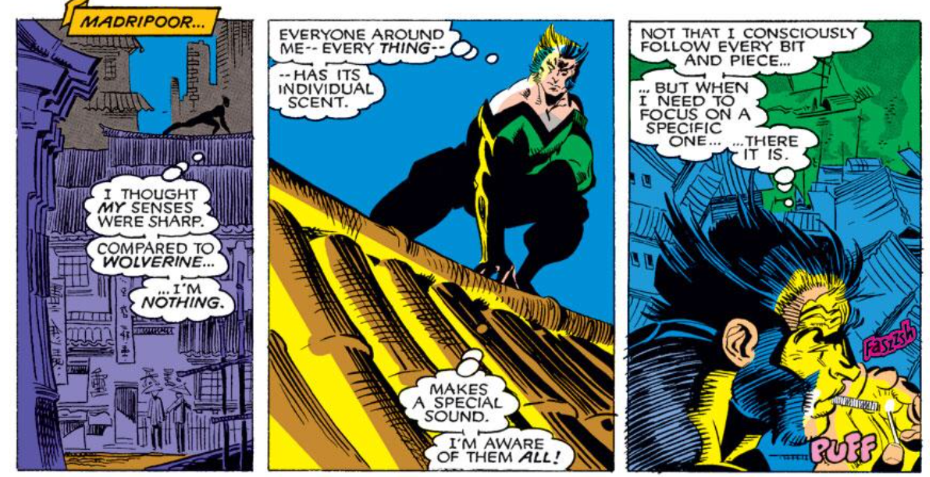 She also manifest bone claws in place of Wolverine's metal ones, a nice bit that inadvertently fits with later retcons. 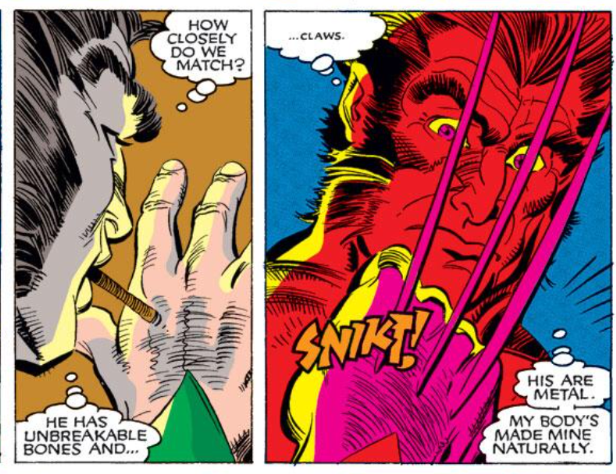 In light of their encounter with the Alt Jamie, Nightcrawler wonders if perhaps their Jamie has powers too.

Though she appears as Courtney Ross at the very end of the issue, it should be noted that is still Sat-yr-9, who killed and replaced the real Courtney what feels like eons ago now.

Claremontisms
Nightcrawler notes that, like the X-Men, one can always tell where Excalibur has been by the destruction they wrought.

Teebore's Take
What a difference an artist can make. While Rick Leonardi is no Alan Davis, this issue is light years ahead of the previous one. In fact, whether it's the presence of Terry Austin & Al Milgrom or something else entirely, this is some of the strongest work yet from Leonardi across his various X-book fill-ins, his looser, more cartoony style reigned in a bit by the inks (at least in the first half; the quality dips a bit in the second, presumably when Milgrom takes over). The end result is art that manages not to detract from the story, giving the first encounter between Excalibur and Jamie Braddock the kind of quality art it deserves. "The Cross-Time Caper" is still showing no signs of coming to an end, and Alan Davis is still gone, but this issue at least shows that, with the right artist, Excalibur can still turn out an entertaining issue despite those two facts.

Next Issue
Tomorrow, Wolverine discovers Spore in Wolverine #21. Next week, Colossus and Marc Silvestri return in Uncanny X-Men #259, followed by the debut of Cable in New Mutants #87.