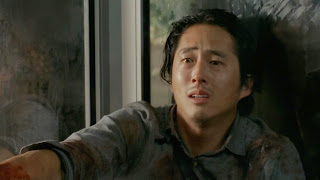 Well, the walls of Alexandria are beginning to crack. Metaphorically, of course. The literal walls are still OK...for now.

The native Alexandrians are struggling to do…anything really. It's really a wonder they've managed to survive this long. But Rick's crew have come in and they're competent. Sure, they can be dicks, but they're competent dicks.

Frankly, I could watch a lot of episodes like this one. Watching people trying to progress. Hitting obstacles along the way. Mix in some zombie killing too. Heck, even the interpersonal drama would be less eye rolling since they're in a relatively safe haven so it seems alright to have concerns above just pure survival.

I could watch episodes where Alexandria suffers loss. They would also have triumphs. But no matter what they'd keep looking forward knowing that, no matter the cost, they're building for the future.

But, I don't think that's what we're going to get. Deanna already noted that several of Rick's people have found themselves in positions of authority. And Rick's group haven't even tried to take over Alexendria yet. Lord knows how Deanna is going to react to the news that her son died.

Mix in the odd, seemingly-out-of-left-field speech by Father Gabriel to Deanna and I think Alexandria is going to blow...soon. I foresee a power struggle between Rick's group and Deanna's. There will be casualties, and probably a section of wall falling down, but Rick's group will win. The only question will be how many Alexandrians will survive and accept the rule of Rick and company. Well, that and will I be able to enjoy Rick and Company being in charge of Alexandria with the bad taste in mouth of how they acquired it.

But, for now, I suppose it's all just speculation.

Other Thoughts:
So Noah wanted to learn architecture? It makes sense to try and learn things that will help you in the long term. Well, it makes sense unless you know how the writers operate.

So, it sounds like Deanna's husband, Reg, created a solar power grid to power the city. Knowledge is a powerful thing.

Aiden learned to respect for Glenn thus completing his two episode character arc. We know what has to happen now...

Eugene gets berated by Tara for not pulling his own weight. However, there's more than one way to "pull your won weight." Of course, not according to the writers. Eugene redeemed himself by picking up a gun and shooting zombies. I suppose that's the only skill of value in the zombie apocalypse.

When Glenn and the others on the supply run saw a hoard of zombies behind a chain link fence I felt like it would be easy to just call them over and stab them through the fence. That would've helped them later on.

I'm always amazed at how easily zombies sneak up on people despite the fact that groan almost all the time.

For those counting at home, this episode had the second time Glenn saved Tara's life. You think Maggie is getting jealous?

So Carol found herself in a plot line that hits very close to Carol's proverbial home. Of course her solution, as always, involves murder. Listen, he's an abusive asshole and if he died I wouldn't shed a tear. At the same time, he is the town doctor. This could get interesting for Rick.

On a few separate occasions we're learning that the Alexandrians aren't opposed to (and possibly survived because of) leaving injured or otherwise compromised people to die and saving their own skin. We're supposed to hate them for that but if Rick's group took similar actions they'd be applauded for making the tough decisions.

I did enjoy the revolving door set piece. It was nicely done and suitably tense. Kudos to the writers and director for the creative staging.

Could Glenn have shot through the revolving door window or was he out of ammo?

Seriously, what's up with Father Gabriel? Is anything he's seen Rick's group do any worse than what he himself has done? I'm interested to see what Deanna does with what he said. First of all, it doesn't seem like he's telling her anything she doesn't know. She even admits as much. Secondly, it really did come off as crazy ramblings.

On The Talking Dead, Tyler James Williams (Noah) said that when his character said "Don't let go" it was less literal to Glenn and more about him not wanting the group to let go of the idea of what Alexandria could be. I suppose we'll have to see if he's right. I did find his death sad and was beginning to like him. In The Walking Dead when a regular character dies I'm always slightly more surprised than I should be but slightly less affected by the death than the writers probably want me to be. I just think I'm a bit desensitized to all the deaths.
Newer Post Older Post Home
Posted by Dr. Bitz at 4:08 PM