Geography of the DC Universe 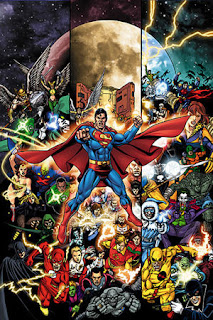 While the Marvel Universe has always been billed as "the world outside your window" (despite the disappointing lack of radioactive Spider-Men outside my window...) and uses a reasonable facsimile of the real New York City as the backdrop for many of its stories, the DC Universe (home of Batman and Superman) has, from the earliest days of Gotham City and Metropolis, presented geography further removed from our world, one which features several major fictional cities.

Siskoid, of the excellent Siskoid's Blog of Geekery, recently asked his readers to take a list of ten of DC's most notable fictional cities and assign them a fictional state, along with the general location of where that state would be (the Earth of the DC Universe is physically larger than our world, so these new states would simply fit in and around existing ones).

I left my response in the comments section of that post, but had so much fun doing it, I thought I'd expand on my answers here. So get ready for one of my geekiest posts ever. Below are the list of the fictional cities, the name of the state I created in which to house each city, that state's approximate location and my reasoning behind the state name (as well as known facts from comic books and other official DC sources about the cities).

(And be sure to check out Siskoid's original post and the comments section thereof, as there are tons of great answers. I'm personally kicking myself for not coming up with Polk, one of the presidents most responsible for America achieving it's "Manifest Destiny", as a state name). 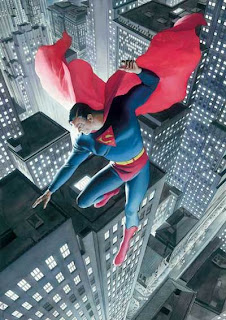 Known Facts: Somewhere in New England, sometimes thought to be in Delaware. Metropolis has also famously been described as "New York City in the daytime", or the positive aspects of major urban cities.

My Fictional State: Plymouth (somewhere on the NE seaboard, north of New York City)
In the real world, the colony of Plymouth was one of the earliest successful English colonies in America (it's the colony the people we think of as Pilgrims founded) but was eventually annexed by the Massachusetts Bay Colony, which comprised a good chunk of New England (including present day Massachusetts).

So I figured in the larger DC Universe the Plymouth colony stuck around, and eventually got turned into a state just like its other colonial brethren. And being one of the first English colonies, it's fitting that it would house the city of one of comics' first super heroes.


2. Gotham City (and Blüdhaven) - Home of Batman (and his associates) 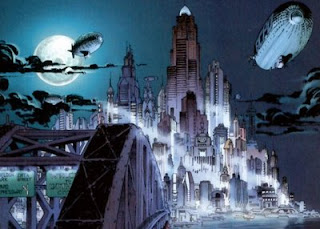 Known Facts: If Metropolis is New York City during the day, than Gotham is New York at night, representing the seedy underbelly of the urban megacity. Some comics have suggested that Gotham (and it's downriver sister city, Blüdhaven) is located in New Jersey.

My Fictional State: New Wales (south of New York, in and around New Jersey)
I figure that if, after the Dutch ceded their colony of New Netherlands and its capital New Amsterdam to England and both got renamed New York in honor of the Duke of York (the title usually bestowed upon the king's second-eldest son), then at some point on the larger American continent of the DC Universe, there would have been a colony named for the king's eldest son, the Prince of Wales, which would eventually become the state of New Wales, home of Gotham City. 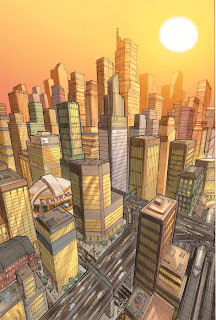 Known Facts: In modern comics, Central and Keystone are considered "twin cities" located across a river from one another (sometimes outright stated as being in Missouri and Kansas, respectively).

My Fictional State: Sioux (Central City) and Platte (Keystone City) (in the Plains region, south of the Dakotas, west of the Mississippi).

If one were to name a state after one of the dominate Native American  tribes in the Midwest, as I've proposed here, the more correct name would be "Lakota", as it is more specific to the region in which  I envision this state to be. "Sioux" is more generic and can apply to several different ethnic groups within the Great Sioux Nation, but I figure, in the course of the DC Universe's American history, it makes sense that the US would appropriate the less accurate term for a state name.

The state of Platte, meanwhile, comes from the river of the same name that flows from the Missouri river through Nebraska and into eastern Colorado and Wyoming, serving as a significant watershed for the Great Plains region. Like the Missouri, Mississippi and Ohio rivers, it deserves to have a state named after it.


5. Midway City - Home of the Silver Age Hawkman, Hawkgirl and the Doom Patrol.

Known Facts: Considered a Midwestern city loosely modeled on Chicago, it was once thought to be in Illinois, but recent sources put in near Sault Ste. Marie, Michigan.

My Fictional State: Tippecanoe (between Illinois and Indiana)
Named for the 1811 Battle of Tippecanoe, which occurred in present day northwest Indiana and broke the power of Native American leader Tecumseh's growing confederation of Indian tribes. Later, William Henry Harrison would parlay his success as the general leading the US forces in the battle into a historically-short term as President of the United States.

Known Facts: Once destroyed by Mongul (which drove Hal Jordan to become an insane super-villain for awhile), it's since gotten better. Definitively located in Californa, it is considered to be located specifically in northern California, between San Fransisco and Green Arrow's Star City (see below), though it is often portrayed as analogous to San Diego or Los Angeles.

My Fictional State: North California (north of Californa, natch)
We already have a North Dakota, a West Virgina and a South Carolina, so why not a North California, especially since the size of California as it is caused some consternation in Congress when it applied for statehood? 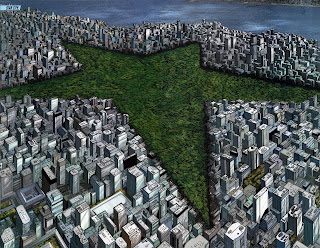 Known Facts: In modern comics it is depicted as roughly analogous to San Fransisco, though further north than San Fransisco's actual location.

My Fictional State: Columbia (south of Oregon, north of North California)
Named for the Columbia River (another historically significant river) which, in our world, helps divide Washington from Oregon. Because Coast City and Gateway City (below) are both also depicted as Northern California cities, I broke two of them off into their own state of North California. But since Star City is usually considered the northernmost of the three cities, I extended it even further north, putting it in a state just south of Oregon and in the Pacific Northwest (which is an homage to Green Arrow's time in Seattle during Mike Grell's landmark run).


8. Gateway City - Home of the Golden Age Mr. Terrific, the Silver Age Spectre, and, for a time, Wonder Woman.

My Fictional State: Also in North California (I figure Coast City would be the capital, with Gateway City the center of North California's industry). With so many northern California/San Fransisco-esque cities, I figured I needed to lump at least two of them into one state.


9. Fawcett City - Home of Captain Marvel and the Marvel family. 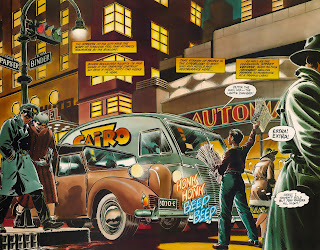 Known Facts: A Midwestern city, alternately said to be in either Wisconsin or Minnesota, with an old-fashioned (circa 1940s/1950s) Art Deco look to it.

My Fictional State: Superior (somewhere southeast of Minnesota and north of Wisconsin)
Taking its name from the Great Lake, it would be a relatively small and insular state, but have frontage on Lake Superior to drive its economy. And true to Captain Marvel's personality, its placement in the fictional DC United States wouldn't deny Minnesota or Wisconsin their frontage on the lake. 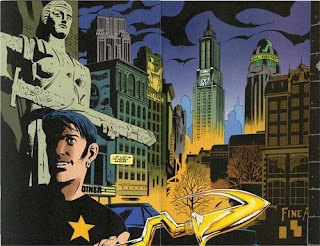 Known Facts: An eastern city with a port, said by the writer who gave it much of its character to be in Maryland.

My Fictional State: Chesapeake (on the Eastern seaboard, near Chesapeake Bay)
Chesapeake Bay drove the commerce of early Delware, New Jersey, Maryland, Virgina and North Carolina (and access to it led to quite a few border disputes amongst those same states) so it makes sense that a larger country would create a state named for this significant waterway.
Newer Post Older Post Home
Posted by Austin Gorton at 8:00 AM