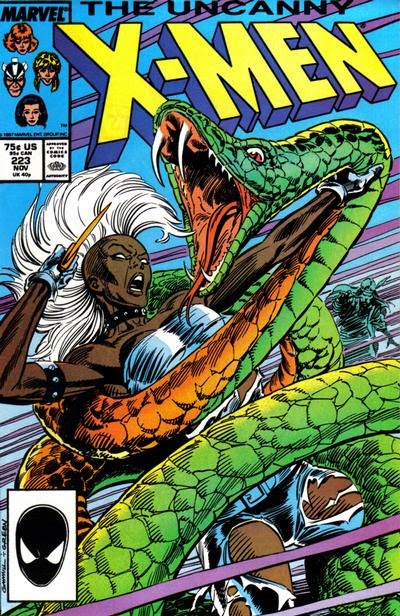 In a Nutshell
Storm confronts Forge. In a hallucination.

Plot
In Washington, Crimson Commando, Stonewall and Super Sabre join Freedom Force, shortly before Destiny has a precognitive vision of the X-Men's deaths. In the Rockies, Naze suddenly falls ill, apparently poisoned by the Eye Killers' venom, and tells Storm to go on without him. In New York, a columnist interviews a group of blue collar workers about mutants. In San Fransisco, the X-Men are using Alcatraz as a headquarters as they search the city for any sign of the Marauders. Madelyne, on a cliff overlooking the ocean, mulls over recent events, including the end of her marriage and the disappearance of her son. Havok sees her from a distance and, fearing she's about to jump, calls out to her.

Elsewhere, Storm has concocted an antidote at Naze's instruction, which he insists she take as well to ward any future effects of the poison. Suddenly, Storm is attacked first by a massive bear and then an enormous snake, as the elements swirl around her. Defeating the creatures, Storm comes across Forge, who tries to convince her to join him in unleashing chaos. Left with no other option, she stabs him, at which point she wakes up, the entire battle a vision caused by the potion. Realizing now the evil Forge is capable of, she resolves to stop him no matter what, much to Naze's pleasure. Back on Alcatraz, Havok and Madelyne bond over their shared circumstances, and Havok tells her the X-Men are her family, and will stand by her, no matter what.

Firsts and Other Notables
Crimson Commando, Stonewall and Super Sabre, the three WWII era heroes Storm fought in issues #215 & #216, join Freedom Force in this issue. Super Sabre, who was believed dead in issue #216, turns up alive, saying he's always been difficult to kill. They'll remain a part of the team for the duration of its existence. 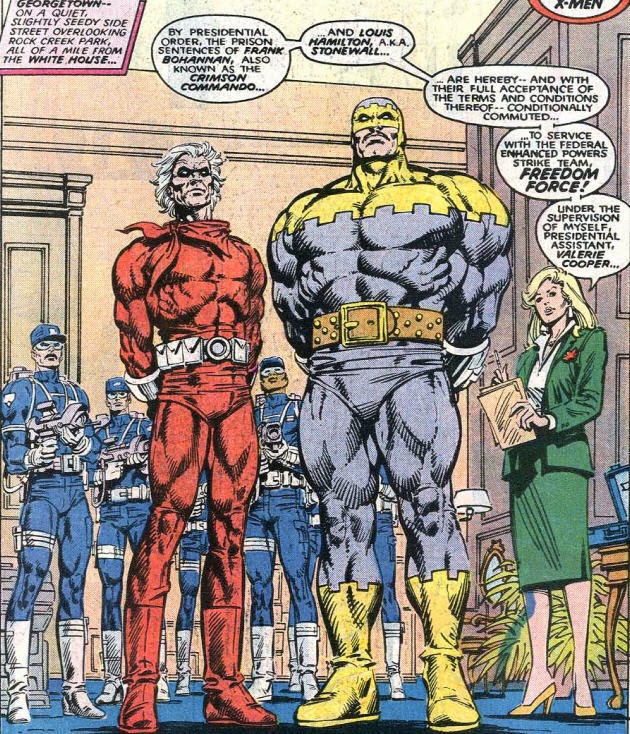 Spider-Woman's departure from the team is also noted, with Val Cooper taking responsibility for her failure. Spider-Woman left Freedom Force when they were tasked with hunting down the Avengers in Avengers Annual #15.

In the wake of their battle with the Marauders, the X-Men are temporarily staying in San Fransisco (their second such tenure in the city), using Alcatraz as a base of operations (though I think by 1987 it was already a tourist site). They continue to find the city, in general, more welcoming to mutants. 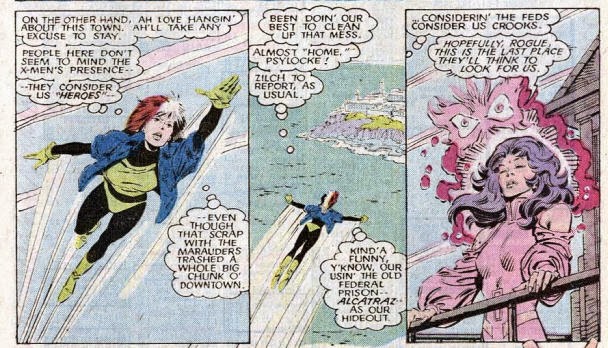 Kerry Gammill fills in on pencils, the first (but certainly not last) fill-in of the Marc Silvestri era. The result is serviceable enough, largely because Dan Green is on hand to help keep the look consistent with Silvestri's issues.

As mentioned in last week's New Mutants post, this month sees Tom DeFalco formally assume the mantle of Editor-in-Chief from Jim Shooter. His reign will oversee unprecedented sales success for the company, as the comics industry heads into the 90s speculator boom, though much of that success will be built on brand dilution, larger and more regularly-occurring crossovers, and marketing gimmicks like foil enhanced embossed hologram covers.

As much as Shooter pushed Claremont to launch an X-Men spinoff, DeFalco will take it even further, leading to a genuine multi-title X-Men franchise, including a solo series for Wolverine, created over Claremont's objections. An indication of his approach to the Marvel Universe, once told that readers wouldn't buy multiple Spider-Man titles, his response was to the effect of "if they like Spider-Man they will", and while the 90s sales bubble he presided over ultimately burst, DeFalco's approach to "franchising" the various characters and teams in the Marvel Universe has been somewhat vindicated, as many of the franchises over which he saw the creation remain in place today.

A Work in Progress
Freedom Force's headquarters is revealed to be a brownstone in Georgetown, and not the lair hidden in the Pentagon used when they were still the Brotherhood of Evil Mutants.

Destiny experiences a vision that the X-Men will soon die. 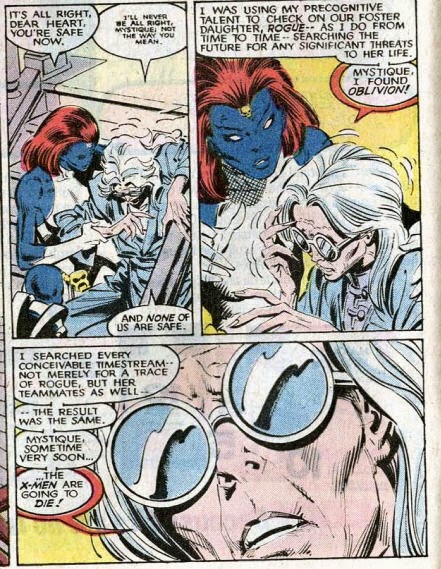 Storm once again sees a vision of Forge summoning demons in Vietnam. 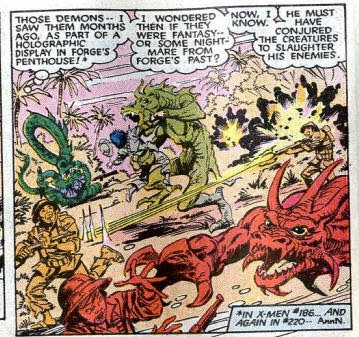 Alex and Maddie bond over their shared circumstances, beginning a period of time in which the two will grow closer.

I Love the 80s
Havok refers to the choice Polaris gave him last issue (blast her or let her go free) as "Hobson's Choice", a fancy way of essentially saying "take it or leave it", a term I've never encountered outside of this issue.

Human/Mutant Relations
In a scene meant to illustrate the rising tide of anti-mutant sentiment, a reporter interviews a group of blue collar workers at a bar about mutants, with one of them dusting off the old chestnut of "I'm not racist because I have a black friend" to defend his position on mutants, including his insistence that if he ever had a child who was a mutant, he'd kill the child. 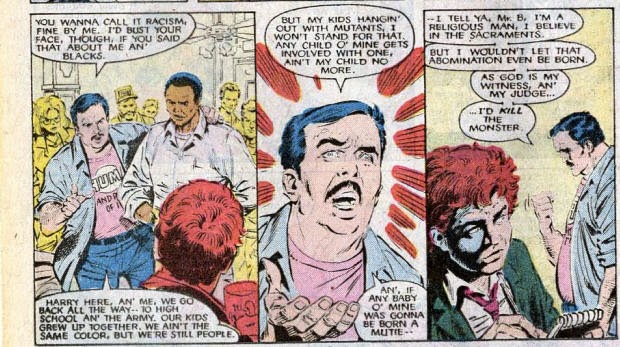 For Sale
There's a half page house ad for "Fall of the Mutants" in this issue. 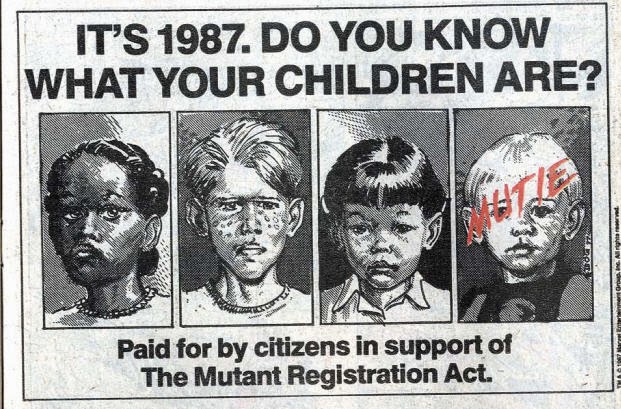 The back page has an ad to raise money for the Special Olympics featuring Meatloaf. 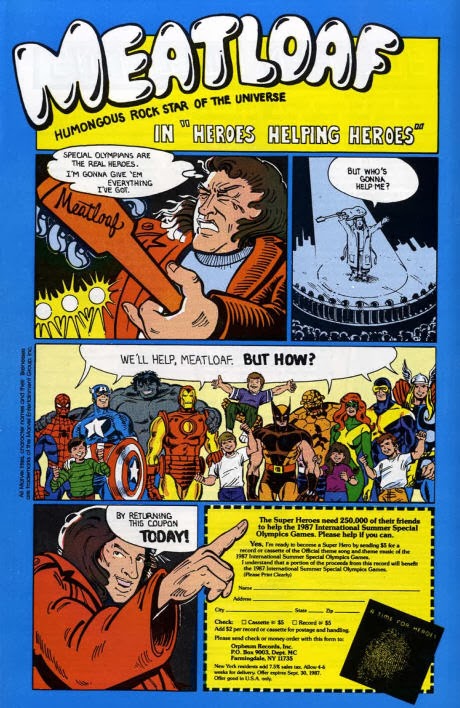 Bullpen Bulletins
Editor Ralph Macchio, who is not the Karate Kid, gets the profile treatment this month.

Teebore's Take
After the relatively straight-forward Marauders rematch that comprised the previous two issues, this one is handed over entirely to more "Fall of the Mutants" setup: Freedom Force (which will feature heavily in the X-Men's portion of that crossover) gains a few new members, Destiny has a vision of the X-Men's deaths, anti-mutant sentiment is growing, and Storm draws ever closer to her encounter with Forge. The X-Men, meanwhile, are still looking back, dealing with the fallout from the Marauders attack as Havok and Madelyne bond over their separation from their loved ones, a pairing that foreshadows the next big event moreso than the immediately impending one.

Of these various threads, the most pages are handed over to the Storm/Naze stuff, and this is officially the point where I become weary of the journey and ready for Storm to encounter Forge already. It doesn't help that the action centerpiece of the issue - Storm battling various giant animals in what turns out to be a hallucination - feels like a failure, in terms of conflict escalation, after Storm's fight with legitimate demons in the previous issue, nor does it help that the issue ends with Storm making essentially the same determination that she made last issue: if necessary, she's willing to kill Forge. The retread nature of Storm's plot, plus the absence of Silvestri, makes this issue, Destiny's premonition aside, feel like the least essential step in the run up to "Fall of the Mutants"

Next Issue
Tomorrow, more "fun" with Bird Brain in New Mutants #58. On Friday, the X-Factor kids get caught up by the Right in X-Factor #22, and next week, Havok and Longshot take in a movie in Uncanny X-Men #224.
Newer Post Older Post Home
Posted by Austin Gorton at 12:00 PM