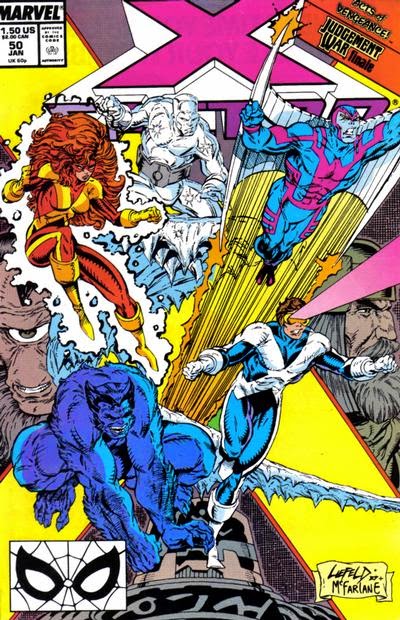 In a Nutshell
X-Factor helps drive off the Celestials as the Chosen, Rejects and Beginagains unite.

Plot
The battle rages inside the Chosen arena as Cyclops and his faction of Rejects and Beginagains make their way through the city in search of Christopher and Marvel Girl. After Palik orders the Dualers into the arena to quell the invading Rejects, Lev and Seera rally the Dualers, turning them against the Chosen. Meanwhile, Cyclops reaches the Hall of Science and is reunited with Christopher and Marvel Girl, though Madelyne remains in control of the body. With Cyclops' help, Jean is able to assert herself, but she can feel both Maddy and Phoenix fighting to get free. Together, Cyclops' group knocks out the city's power grid, shutting down the barrier protecting the Chosen from the battle in the arena. As more Celestials arrive outside the city, Palik is forced to restore Archangel's sight, allowing him to overpower Rask. Cyclops and Marvel Girl reach the arena at the same time as Ryest and the Beginagain elders, just as the final Celestial, Arishem lands, outside the city. 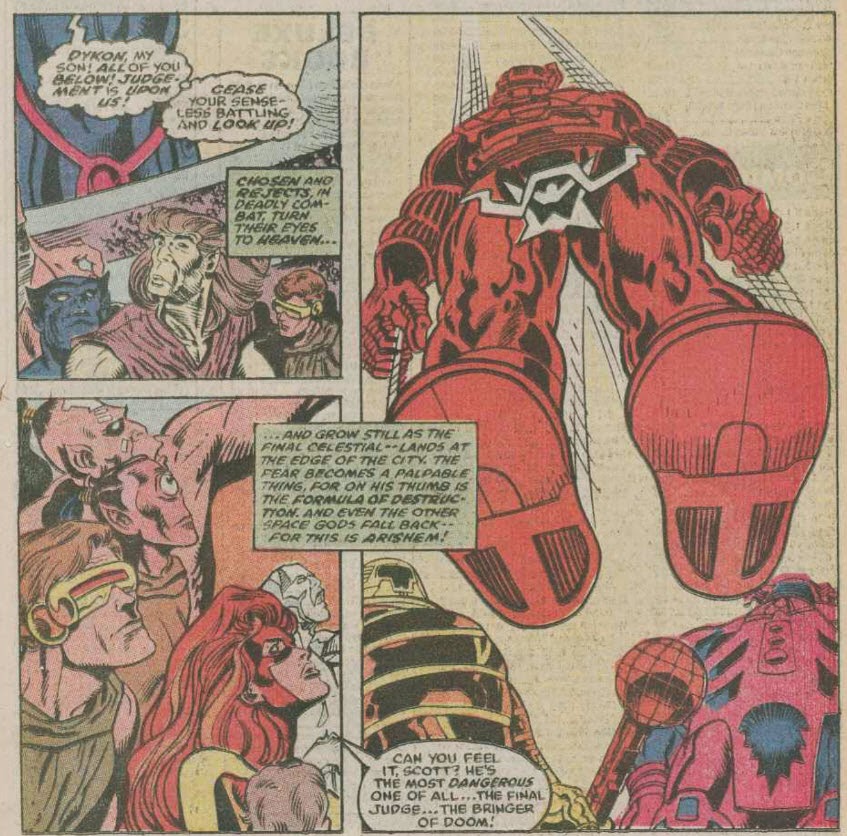 Realizing their judgement is about to commence, Marvel Girl gathers the leaders of all three factions. Ryest argues that they must unite just as X-Factor has done to stave off their destruction, and Palik and Zharkah agree, rallying their people to drive off the Celestials. Marvel Girl telepathically links everyone together, transmitting their unity, along with the linger vestiges of Madelyne and Phoenix, to Cyclops, who acts as lens for their power and blasts Arishem, destroying his hand before he can render a verdict. The Celestials depart, leaving behind monitoring devices like Ship. X-Factor bids goodbye to their new friends, who agree to work together moving forward, then board Ship to go home. Just as Ship jumps into hyperspace, they pass another vessel which, unknown to them, Professor X is aboard, who senses the presence of his original students. Shortly thereafter, Ship nears Earth, having learned the truth of his past, and confident in the future ahead.

2nd Story: "Meanwhile, On Earth..." Apocalypse rejects the offer of the Prime Movers' lackey to joins his Acts of Vengeance, and the lackey reveals himself as Loki, the true power behind the attacks. The two battle, with Apocalypse rejecting Loki's claims of godhood. When Caliban intervenes on Apocalypse's behalf, distracting Loki, Apocalypse attempts to capture him and harness his power, but Loki escapes. He then disappears after telling Apocalypse that if he dares to oppose Loki, he will join humanity in death. After he's gone, Apocalypse tells Caliban it's time for Caliban's mission to begin, to destroy the weak that the strong have room to grow.

Firsts and Other Notables
An "Acts of Vengeance" tie-in, all of that material is contained within the issue's second story and is, essentially, one big battle between Loki and Apocalypse, as Apocalypse rejects Loki's offer of alliance. It also makes it very clear that Loki is Loki, a revelation that hadn't really appeared in any of the main "Acts" titles yet and probably cheesed off John Byrne. 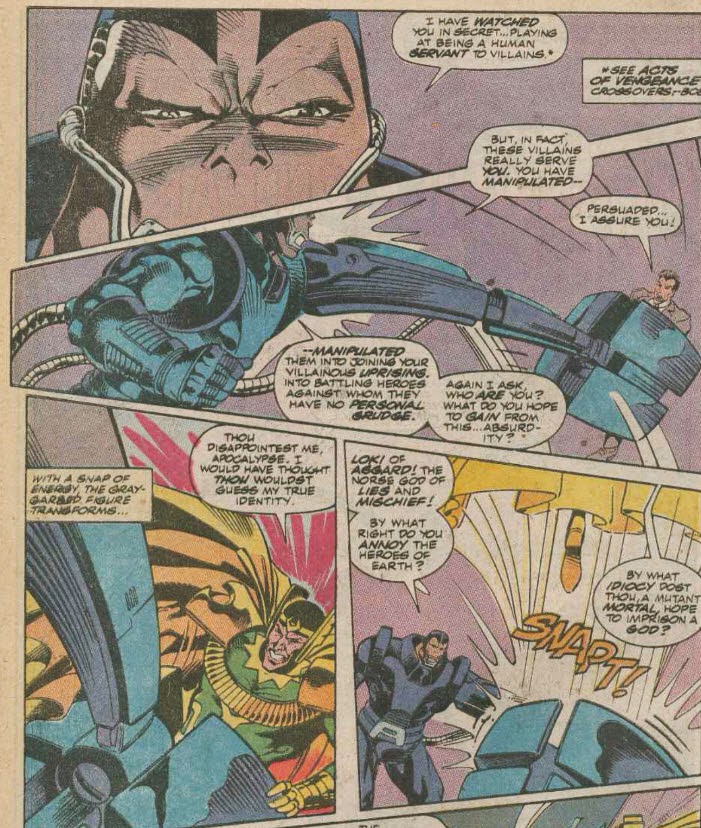 As of this issue, Jean is no longer sharing her body with the consciousnesses of Madelyne and Phoenix, having purged them via the attack on the Celestials. She still retains their memories, a convenient way to limit any future "but Jean shouldn't remember that thing Maddy did!" arguments and which will also have some repercussions that will be explored in future issues, but she no longer has to fight them for control of her body.

On their way back to Earth, Ship passes a ship with Professor X aboard, and he telepathically picks up on the presence of his original students (including Jean, whose presence he should find more shocking given that he left Earth before learning she was alive). He also appears to be sick/injured, suggesting Simonson thinks he's still recovering from the injuries that led him to flee Earth with the Starjammers, even though X-Men #203 established he was healed but just couldn't make it back to Earth. 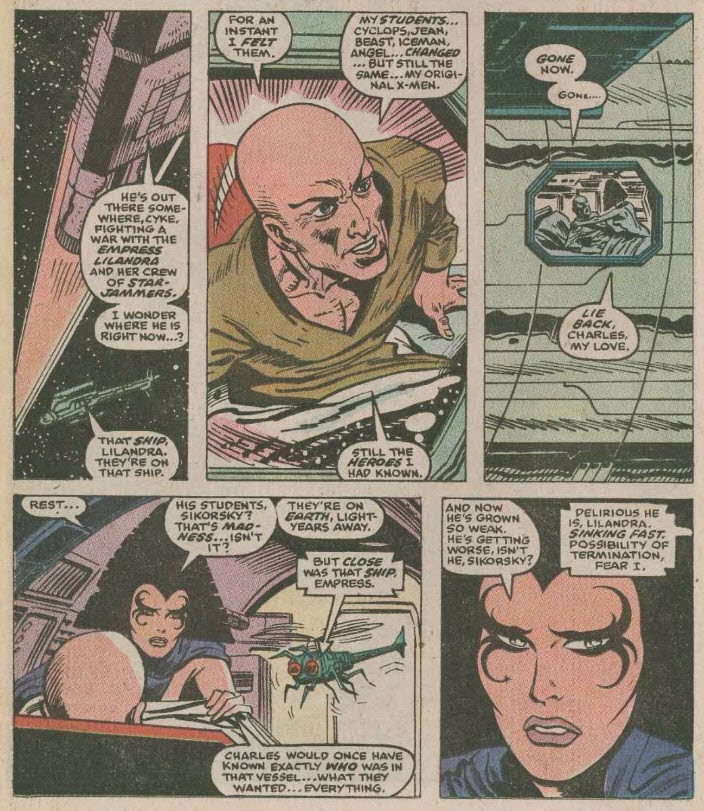 Caliban, last seen with Apocalypse in X-Factor Annual #3, reappears this issue, having been transformed into Apocalypse's Hell Hound and tasked with winnowing out the weak amongst mankind. He'll have a little run of appearances between this series and New Mutants before again disappearing into storytelling limbo for awhile. 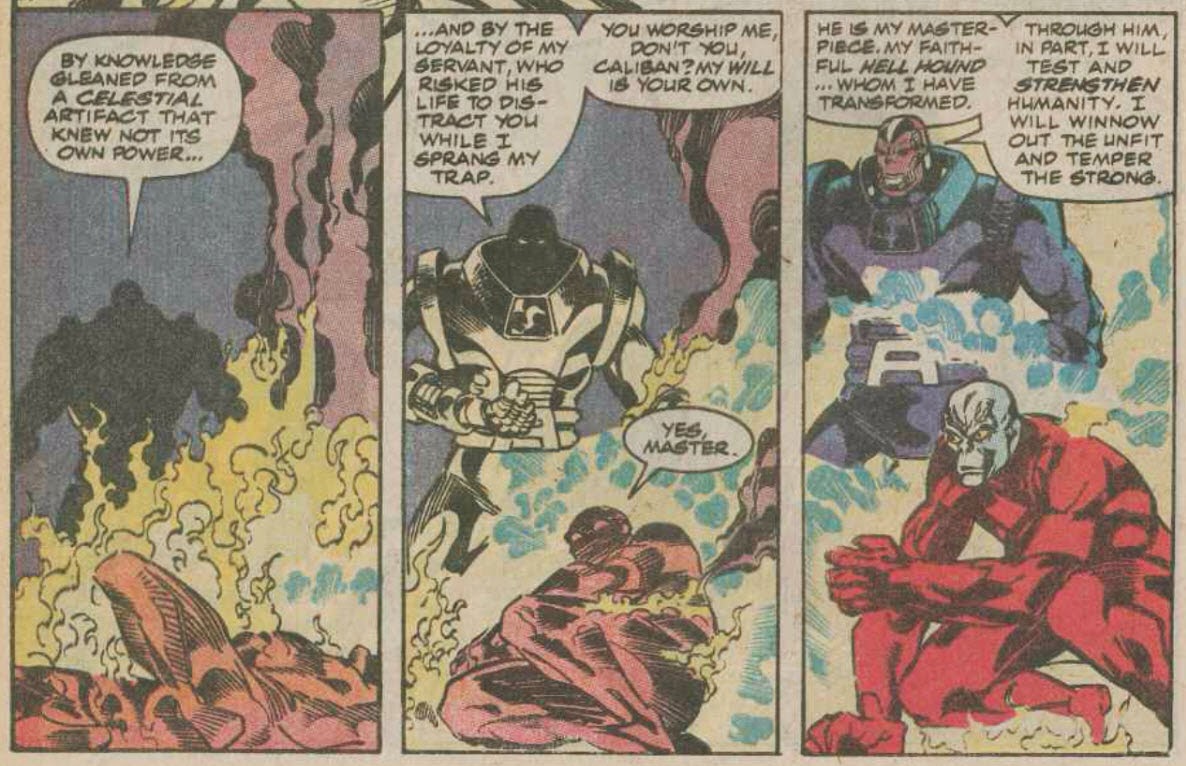 The Celestials are defeated once the Chosen, Rejects and Beginagains set aside their differences and unite (and then Cyclops and Marvel Girl blast the Celestials with the power of their unity, or something), though Ryest believes that may have been the Celestials plan to get them to unite all along. 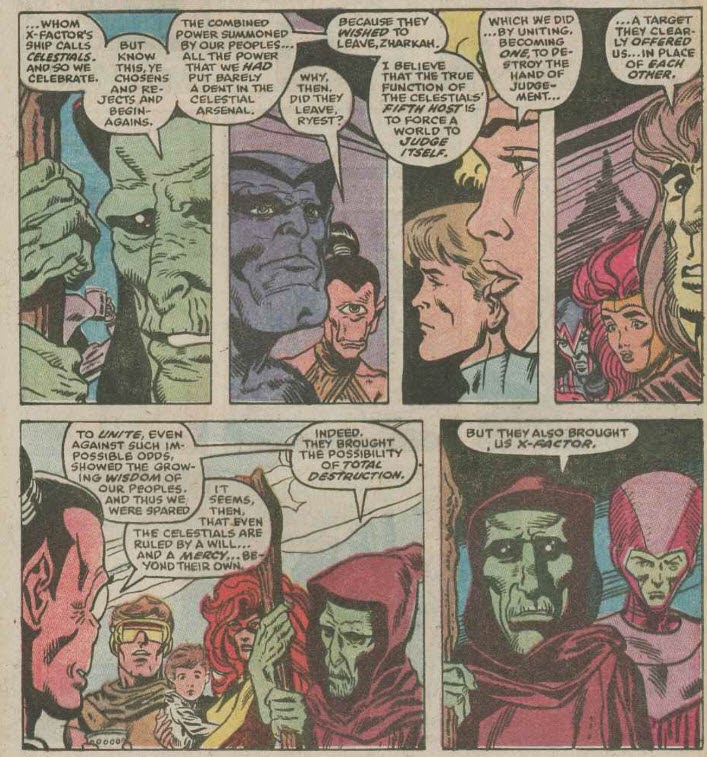 In the end, the three factions agree to work together moving forward, rebuilding their society, though X-Factor remains wary of Palik. Archangel insists that Seera, who will one day succeed him, will keep the Chosen on the right path. Of course, neither this world nor any of these characters have, to date, appeared again.

This story shares its title with that of issue #25.

It's another Liefeld/McFarlane cover this month (after New Mutants #85), though this one does have feet on it.

Rich Buckler fills in on art, and with the series about to enter a period of nebulous artists, that means the previous issue was Paul Smith's last issue on the series. Not sure if he was always signed just for the one story or a finite number of issues, or if he just left, but it's a shame he wasn't at least able to finish out the story.

A Work in Progress
In case you were worried, Archangel gets his sight back this issue. Palik restores it, suggesting his removal of it was more psychic than physical, even though he pretty clearly blasted him in the eyes with something last issue. 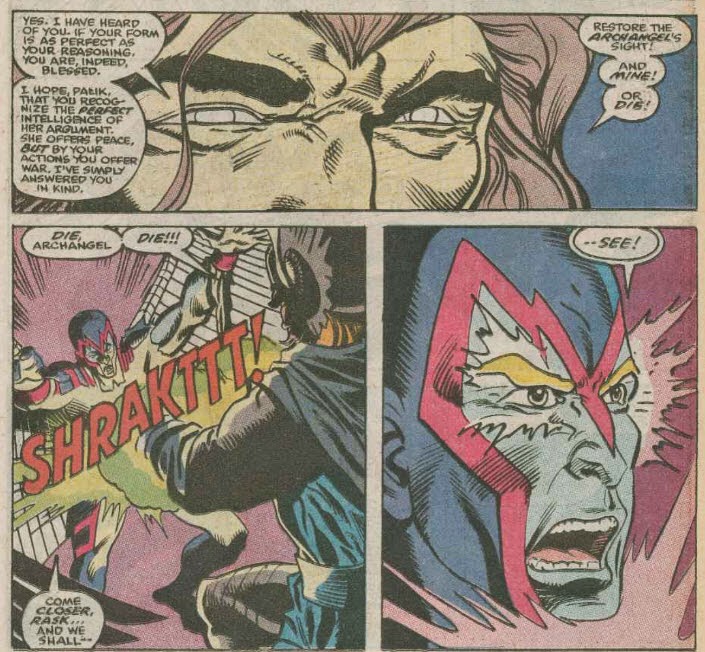 Impressed by Ship's concern and loyalty towards X-Factor, Zharkah says the Rejects may have to rethink their scorn of robots. 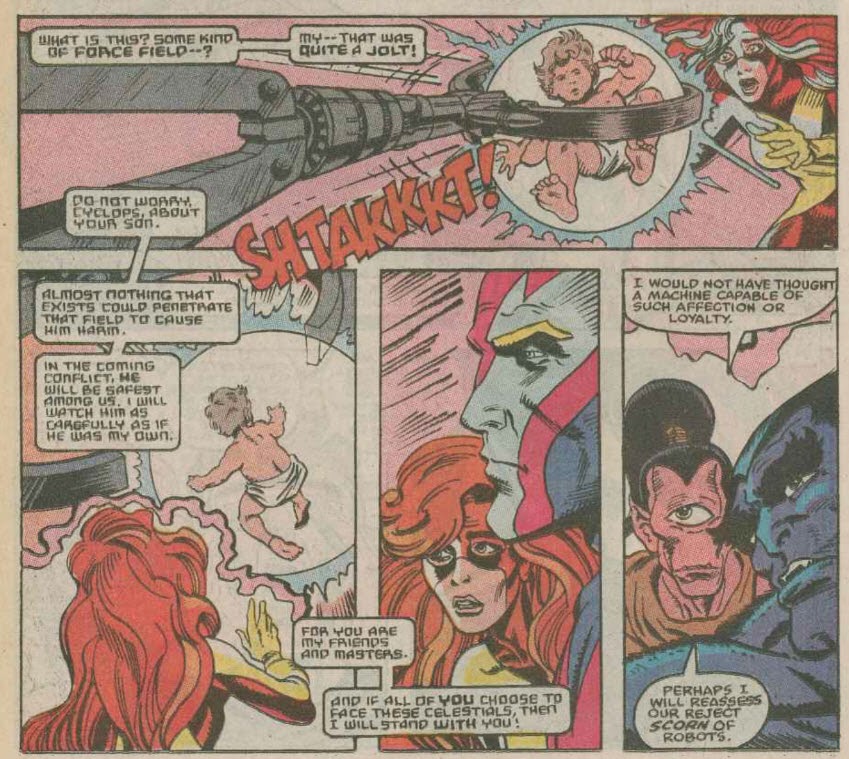 The Celestials leave behind Ship-esque monitoring devices, one of whom lands upright like a tall building, a look that will soon become familiar in this book.

Apocalypse's current base is said to be beneath Mt. Everest.

Loki continues to carry a personal grudge against Cyclops, the X-Men and the New Mutants, stemming from the X-Men/Alpha Flight limited series and the first "Asgardian Wars" story.

Like a Phoenix, From the Ashes
Thanks to the memories she now has from Phoenix, Jean remembers what it feels like to experience the death of a planet. .

Teebore's Take
And with that, "Judgment War" comes to a close with a mostly successful climax: X-Factor is reunited, the various planetary factions comes together to stave off the judgment of the Celestials, and the seeds of a new society are planted as X-Factor finally gets back to Earth. X-Factor themselves are less involved in this victory than the New Mutants were in theirs, but this whole story has been less about X-Factor actively changing this world and more about them inspiring change in others (and X-Factor still delivers the actual blow against the Celestials, the Marvel Girl/Cyclops Phoenix blast of combined souls that destroys Arishem's thumb, reminiscent of the Love Beam that defeated the Z'Nox in X-Men #65). In fact, the whole story could be read as X-Factor doing to this world what they want to do on Earth: inspire society to overcome their differences and come together as one race.

Of course, overall, this story is far from perfect. Like New Mutants' Asgard story, it's at least one fill-in and one regular issue too long, and it has some pacing problems, particularly about 3/4 of the way through when it seems like maybe Simonson started drawing things out so the conclusion would land on issue #50. And most egregious of all, Marvel Girl straight up disappears for large swaths of this story, and when she does appear, it's either as an unconscious or crazy prisoner. Granted, she turns out to be integral to the resolution of the overall plot, but being a big deal in the last chapter doesn't really make up for being marginalized in all the previous ones.

Still, this holds up about as well as I remembered (and certainly better than the contemporaneous long running New Mutants story). The new world and characters crafted by Simonson & Smith feel lived-in and well-realized despite being brand new, with each of the main new characters holding their own next to the members of X-Factor (Iceman, for example, inspires Lev and the Dualers to rise up and fight for their rights, but it isn't like he's directly whipping them into a frenzy or leading them in their revolt).Al Milgrom is no Bob Wiacek, and his inks certainly do their best to take the shine off Paul Smith's art, but it is still Paul Smith art, and it's hard not to enjoy that. Thematic parallels aside, it's perhaps not wise to keep the book away from familiar settings, while making the title characters supporting players in their own book, for so long, but as a sci-fi/superhero mashup, this story works, and whereas the New Mutants Asgard story was both boring and ultimately kind of aimless, this one at least has some entertainment value to recommend it.