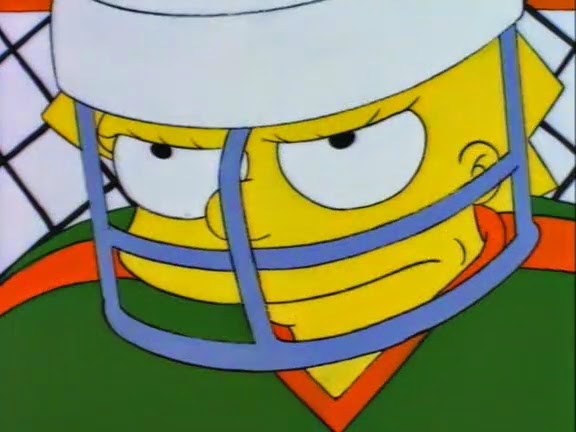 Or the One Where
Bart and Lisa compete on rival hockey teams.

The Setup
After being told she's in danger of failing gym, Lisa is forced to join an extracurricular team and discovers an aptitude for hockey.

Notable Notes
Bart's hockey team, the Mighty Pigs, is obviously a reference to The Mighty Ducks, which was arguably at the height of its popularity when this episode was created (it aired a few months after the second film was released).

This episode is responsible for another oft-quoted Ralph Wiggum-ism: Me fail English? That's unpossible! 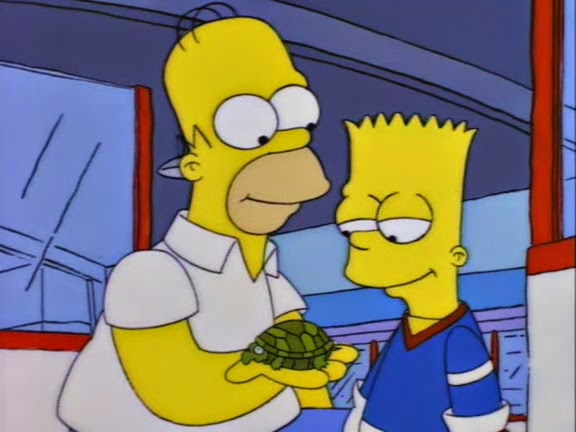 Quotable Quotes
Bart: Ah, Action News. The last place an impressionable kid can go for TV violence.
Announcer: And now, here's your Action Anchor, Kent Brockman.
Kent: Hello, I'm Kent Brockman! Our top stories tonight: a tremendous explosion in the price of lumber, President Reagan dyes...his hair, plus Garry Trudeau and his new musical comedy revue. But first! Let's check the death count from the killer storm bearing down on us like a shotgun full of snow.
Weatherman: Well, Kent, as of now the death count is zero. But it is ready to shoot right up.
Kent: Oh my God. Damn you snow!

Homer: Well, boy, you won. So I'm going to live up to my side of the agreement: here's your turtle, alive and well.

Homer: Lisa, if the Bible has taught us nothing else -- and it hasn't -- it's that girls should stick to girls' sports, such as hot-oil wrestling, foxy boxing, and such-and-such.

Homer: OK, hotshots, now that my daughter is on your team, I want to make a few things clear.
Lisa: Please, Dad, I'll be fine.
Homer: I don't want anyone to give her a hard time just because she's different: no jokes, no taunting -- Look, that kid's got bosoms! Who's got a wet towel? Come here, you butterball.
Uter: Don't make me run, I'm full of chocolate!

Bart: Lisa, certain differences -- rivalries, if you will -- have come up between us. At first I thought we could talk it over like civilized people. But instead, I just ripped the head off Mr. Honeybunny.
Lisa: Bart, that was your cherished childhood toy.
Bart: Aah! Mr. Honeybunny! 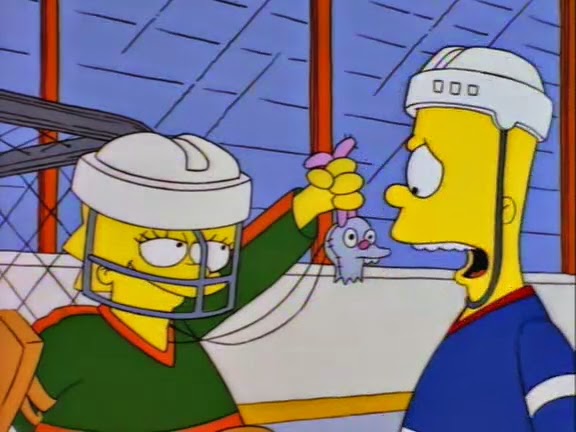 Teebore's Take
While this episode is one of the all time great Bart/Lisa episodes (a subcategory of episodes with relatively few entries in it, as most Bart/Lisa outings get overshadowed by something larger, like the time they exposed Sideshow Bob for framing Krusty or tried - but failed - to save Itchy & Scratchy Studios), and for all its top notch Golden Age hilarity, it's also a grim portent of things to come, as Jerk-Ass Homer is on full display throughout the episode, endlessly heckling one child or another, pitting them against one another to gain his favor and threatening their pets in the interest of success on the ice. Granted, in this case, Homer's attitude is directly tied into the episode's larger point about the effect pee-wee sports has on parents and the pressures kids are under by their parents to play these sports (and play them well) from a very young age, which makes his actions less egregious. This episode, for the gags, what is says, and the depiction of the relationship between Bart and Lisa, is strong enough to rise above the grim visage of things to come, but there's no denying that visage is there.

One of the great Bart/Lisa episodes, along with being a tremendously funny and a pointed look at the impact of youth sports on both the kids that play them, and their parents. 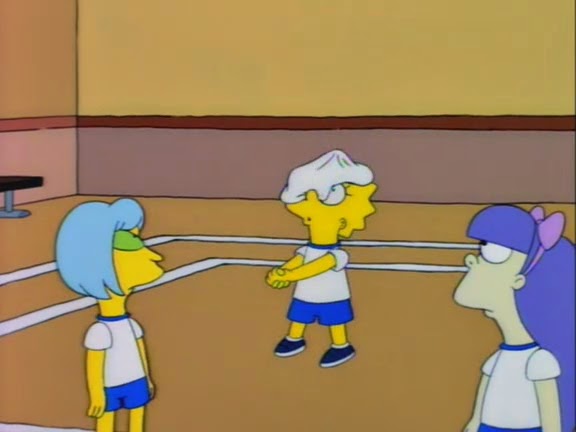